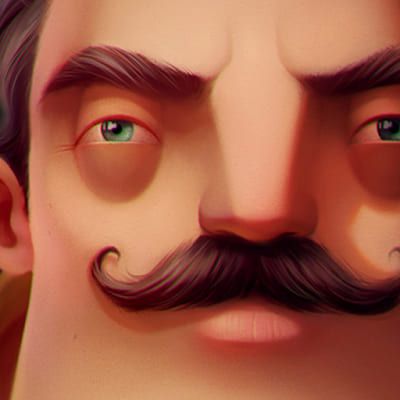 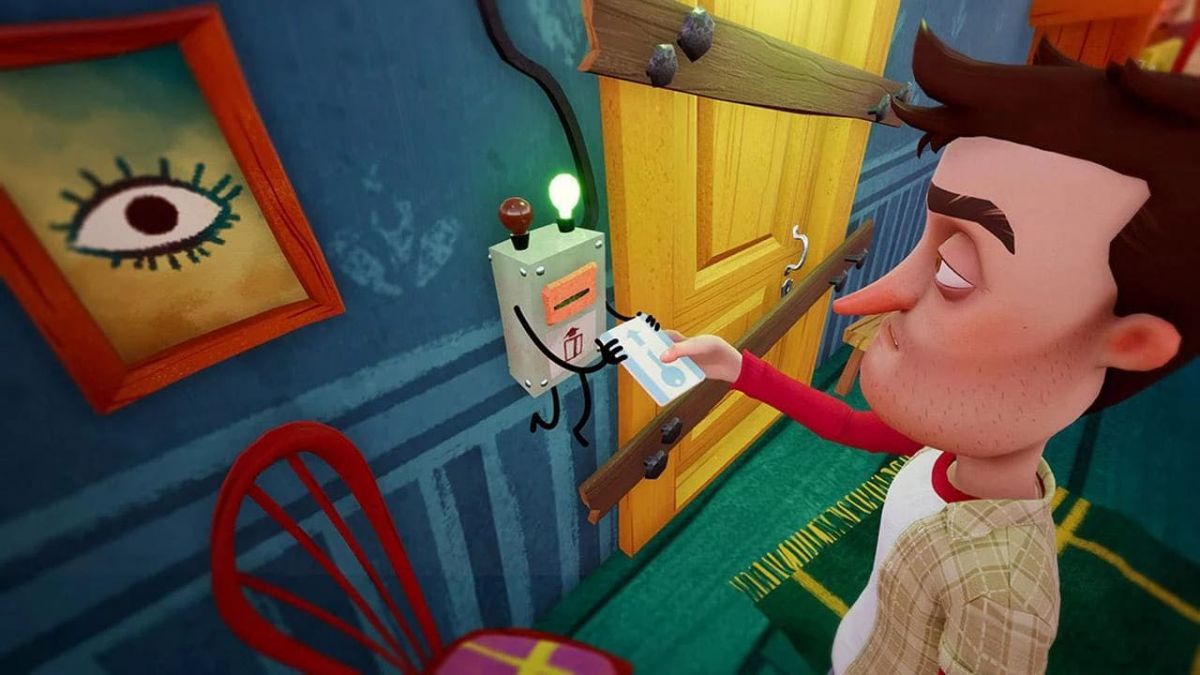 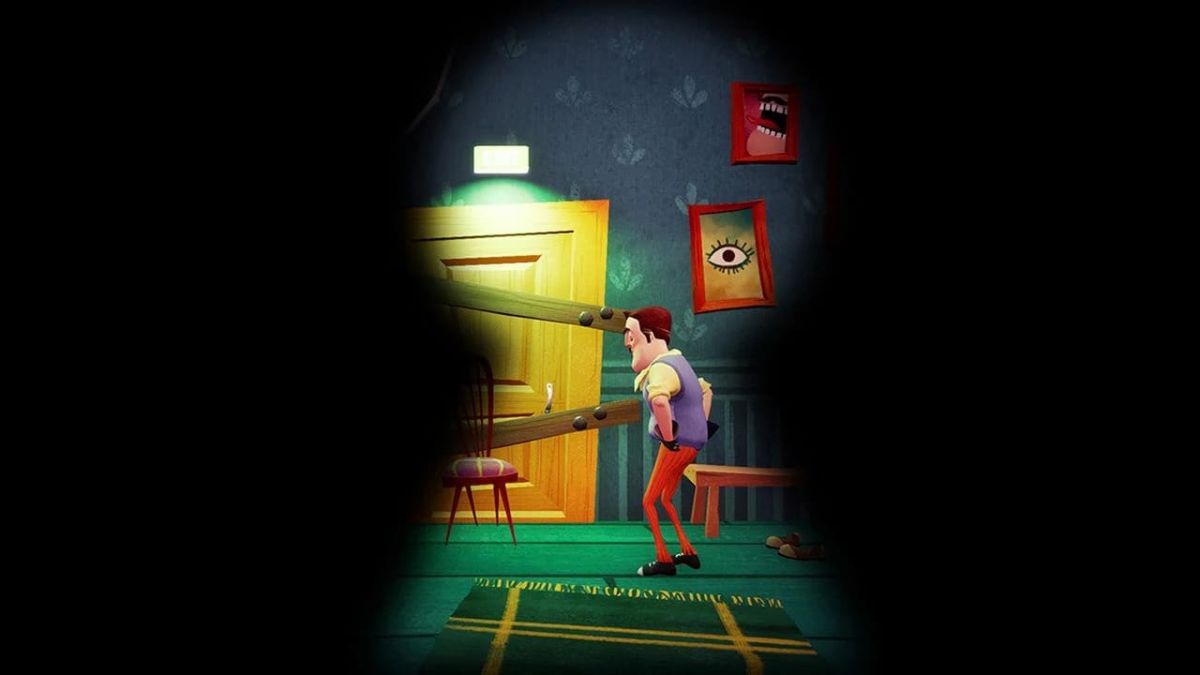 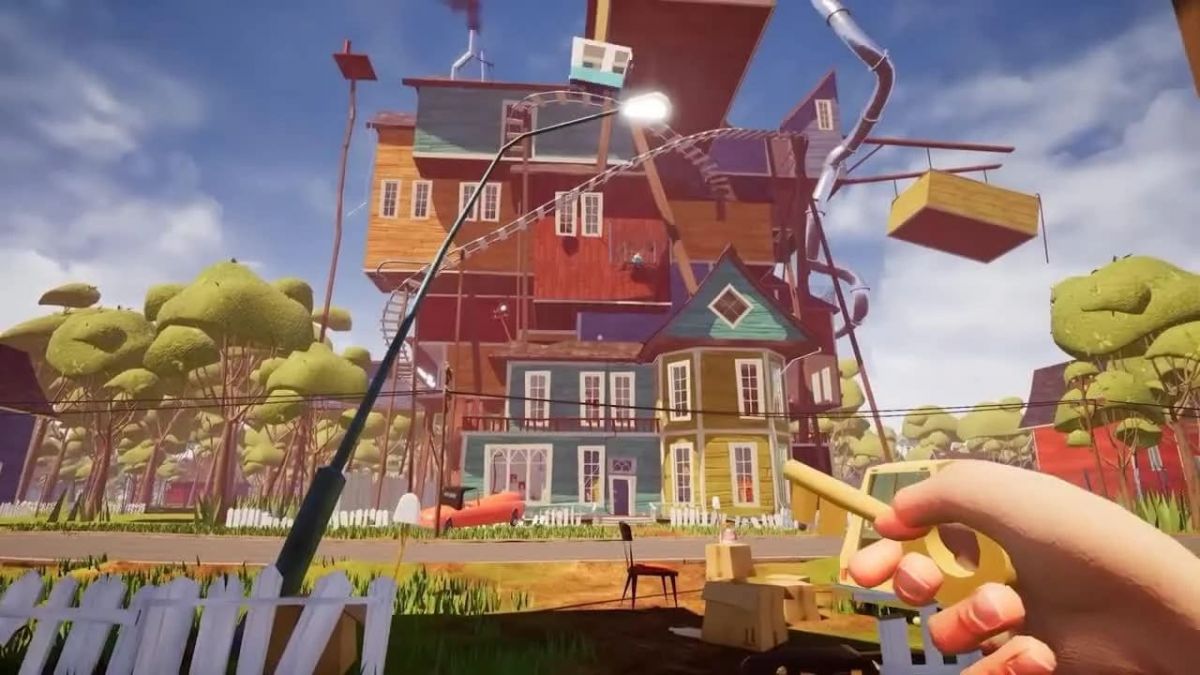 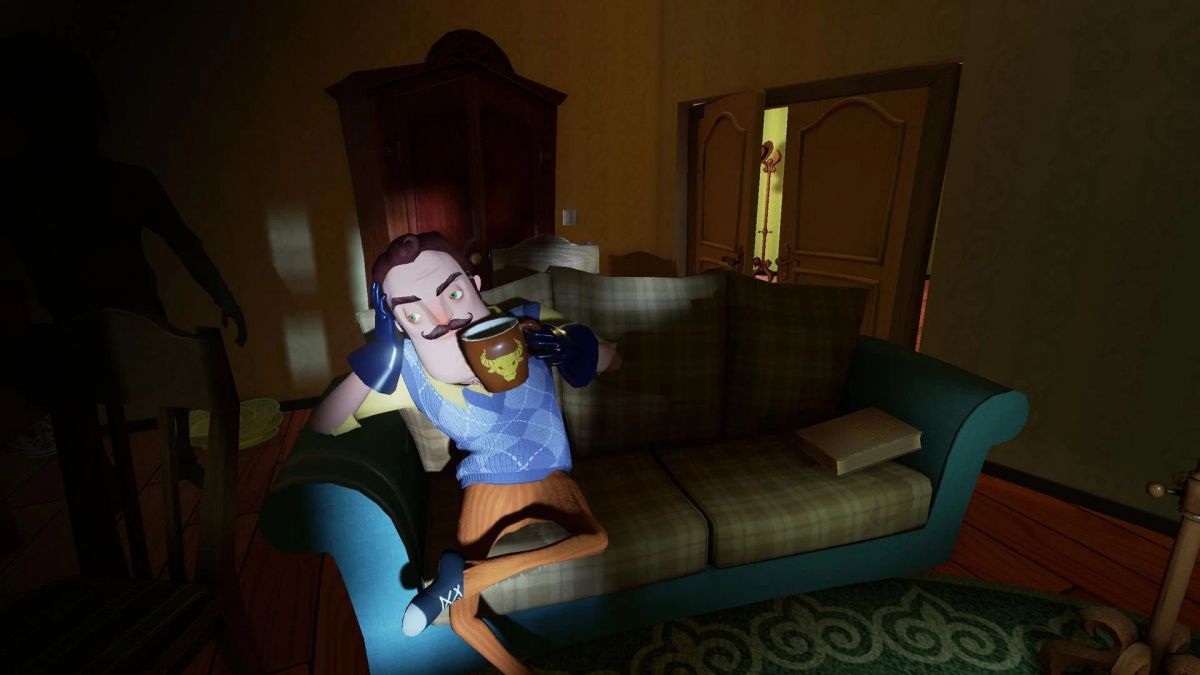 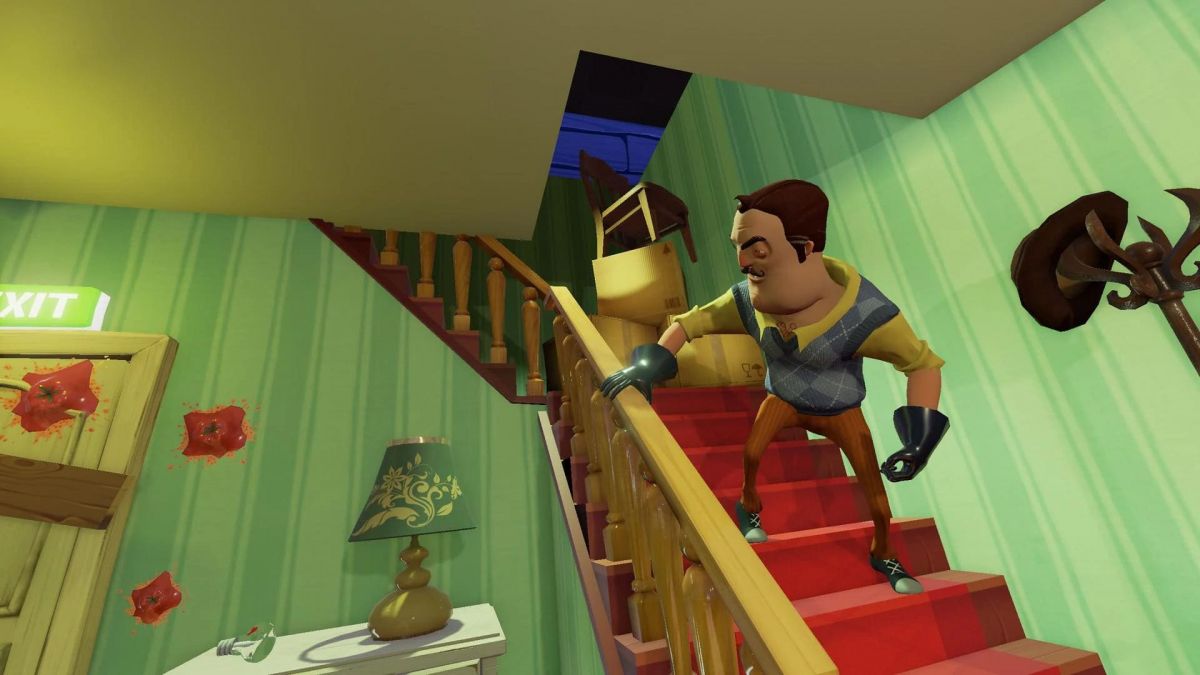 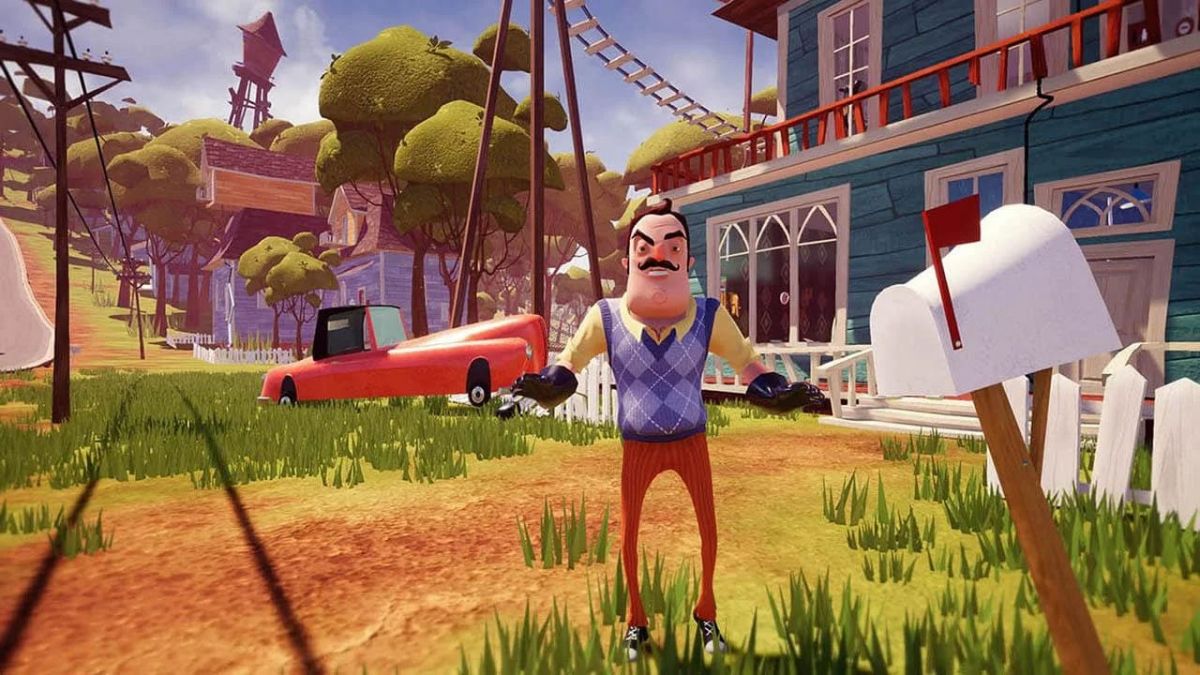 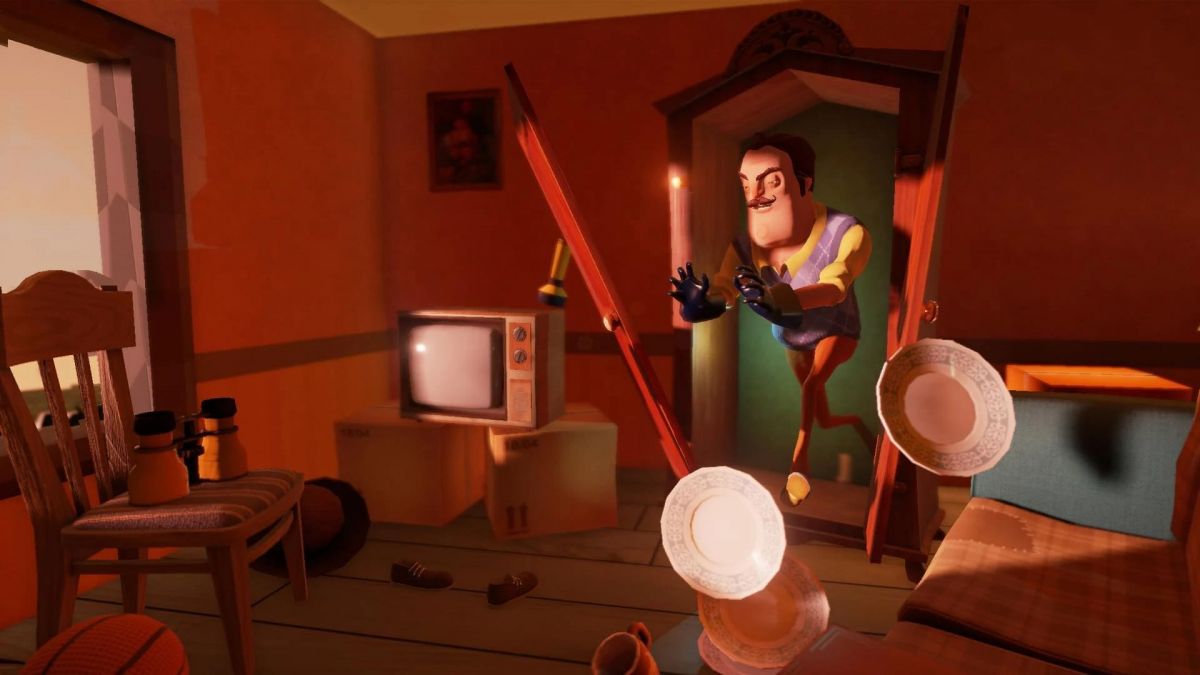 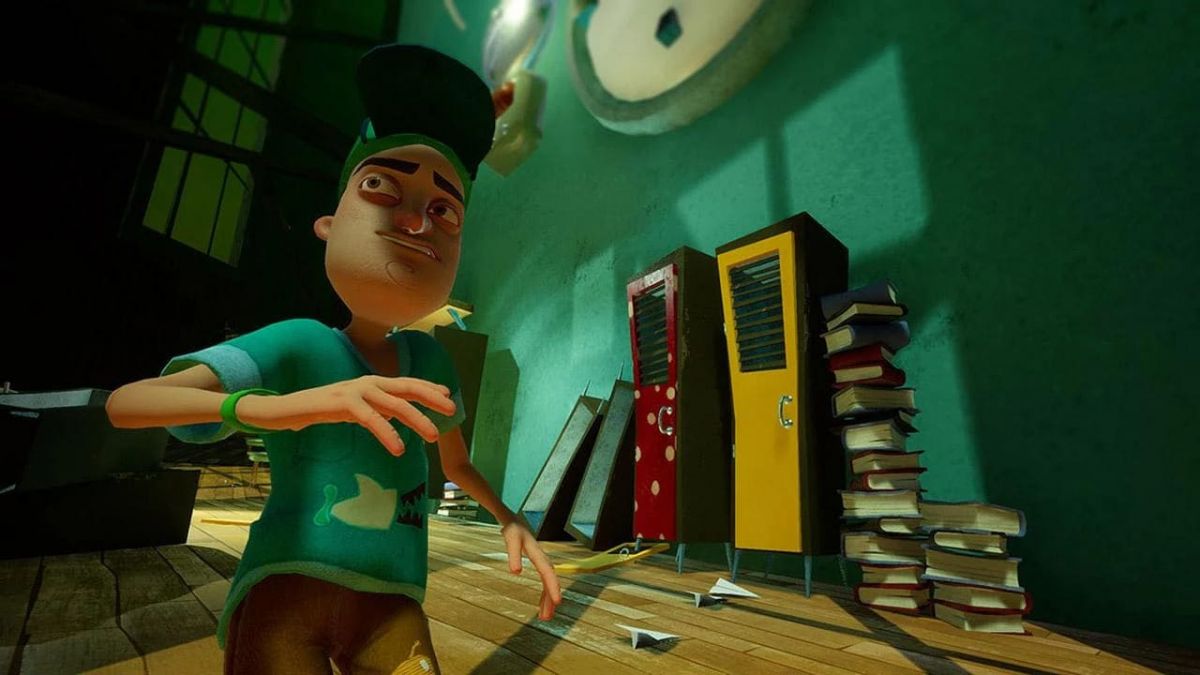 The game Hello Neighbor adopts a particularly novel theme. In the game, the player sneaks into the neighbor's house to peep the secrets, which satisfies a certain aspect of the game player's inner desire to explore. This is a mobile game with horror colors, and the plot of the game is the most attractive.

First of all, the plot of this game is very close to our life. In the game, the child played by the player accidentally discovered the strange sound coming from the neighbor's house, and also saw the strange behavior of the neighbor's uncle. Out of curiosity, the player decides to sneak into a neighbor's house to spy on what's going on. Therefore, this game is a theme that originates from life and can give full play to everyone's imagination. With the first-person perspective and the gameplay of solving problems and diving, this tense atmosphere allows players to immerse themselves in the game and gain strong empathy. This game is marked with horror and suspense tag in the introduction of the game. In fact, horror suspense also accurately describes the atmosphere during the game. When the player sneaks into the neighbor's house in fear, he will always worry about being caught by the neighbor's uncle. In the process of solving the puzzle, the player also has to fight with the neighbor uncle to explore the secrets of his house. So the game's lingering tension and unknown and uncontrollable environment help this game to achieve a terrifying effect. The original and simple sense of horror always comes from things in ordinary life, and obviously this game has captured this very well. Although the environment in the game shows very ordinary and ordinary things, and there are no vulgar horror elements, but it keeps players immersed in such a terrifying atmosphere, so this game is in the atmosphere and plot.

Secondly, the game's screen settings are also very delicate and close to life, because the game mainly takes place in the neighbor's uncle's house, including his indoor, basement and outdoor scenes are designed to be very consistent with the laws of life. Because the neighbor's uncle's house is located in a quiet suburban residential area, the environment is very quiet, and the sound of the player's every move may be heard. Moreover, the placement of some items and facilities in the game screen are very in line with the laws of life, and even the shadows after the sun shines will be displayed in the game screen. For example, in the basement, because the sunlight is not very sufficient and the lighting is relatively dim, the picture quality of the whole picture is yellowish, which looks gloomy and terrifying. The neighbor's uncle's house and his garden are also designed in line with the laws and life scenarios. Outside the neighbor's uncle's house is his humble garden. Outside the garden is a one-story game. Players may play football on the road and so on. Once the ball fell on the open space of a neighbor's house to play a game, and players all went to pick up the ball. The settings of this picture are very close to life. This very cartoony and more realistic game screen makes it easier for players to immerse themselves in this game.

However, although the theme and gameplay of the game are interesting, the design of the game is not very friendly. Factors such as perfunctory design and unfriendly guidance make this game rather boring. Although there are five chapters in the game with different clearance methods, none of them are fresh, just play the game based on random performance. Sometimes the player doesn't even know what's going on, and that chapter is over, so the process is too short, which is also an unsatisfactory problem. The AI in this game is not very friendly to players, and the villainous neighbor uncle does not have a set route and patrol range like the AI in traditional games. The uncle neighbors in this game will make corresponding adjustments to the player's behavior, such as when the player opens the door, when they encounter objects, etc. These behaviors will cause the uncle neighbors to react differently. But in the course of the game, some accidental situations will also occur. For example, when the uncle walks out of a certain warning range, no matter how the player pretends and acts, the uncle of the neighbor will ignore it, which will make people feel bad.

Overall, this game is a very good horror-themed puzzle-solving game. The level of the game screen is very good, the style of painting is very playful, and there are many horror factors. The most important thing is that the story of this game is very interesting and can be brought into the player. So this is a game worth trying.

The Description of Hello Neighbor

The mobile version of Hello Neighbor was offered by Tiny Build in 2018 and its other versions are also available on Steam and consoles. Players can obtain this mobile game on App Store or Google Play for free and purchase further in-game offers while they’re playing. This game combines various intriguing elements into its gameplay. It is packed with mysteries, horrors, puzzles, actions and adventures. This game is played in a single-player mode where the player plays as the protagonist character against the “neighbor” character run by the AI program. The aim of this game is to reveal the mysteries and secrets in the basement and house of the neighbor by skillful stealth actions into the those areas, avoiding being seen and caught. Being detected would incur a chasing and escaping situation between the player and the neighbor who is likely to outpace the former and toss the gamer out of his house. If that happens, the game restarts all over again. The game progress is made through completing one act after another. There are four acts in total and each act brings more difficulty and complicity of the game. However, players can decide to play Hello Neighbor in two different difficulty modes: regular mode and friendly mode. The former mode is the standard difficulty level where the neighbor is alert on the movements of the intruder and he can run a bit faster in chasing. While friendly mode lowers the sensitiveness and alertness of the neighbor whose running speed is also slowed down.

Hello Neighbor has been downloaded over 10,000,000 times on Google Play and 430,749 users have rated it at 3.9 out of 5. Likewise, App Store users rate it at 3.8 out of 5 stars. Some other app review platforms such as ign.com and gamespot rated the game at a lower score range around 3-4 out of 10 band. However, the rating is influenced by the number of votes in general.

2. Graphics and details can be improved.

This single player mobile game combines a number of elements well into one coherent gameplay. As a straightforward single player game, the modes of playing are quite simple and minimal. However, this game introduces the AI learning mechanism into its major construct and game progress. The first and most-perceived feature of the game is perhaps its atmosphere. From the first Act, players can get immersed into the horror, suspension and paranoia-packed game world. This effect is successfully created by making full use of the closed small space. As we know, all of the gameplay in Hello Neighbor takes place inside a mysterious house without any interaction with the outside open space. In game design, a compact and closed indoor space can create higher intensity of certain effects. The first basement scene immediately brings players into such vibe. Besides, the game progress rhythm is also quite well-paced with an unfolding storytelling. Based on four acts, players play through the plot one act after another. Each act reveals more secrets and stories of the neighbor while players also explore more complicated structure of his house. This mechanism on the one hand increases the difficulty level of the game; on the other hand, it makes progress in the storyline. The final act is the battle with the neighbor. This is where the action feature comes into play to its highlight. The previous three acts are mainly puzzle-based where players act skillfully at the same time, the forth act intensifies the action of dodging and stealth. What’s more, this game also offers a large number of interactive in-game items. Some of them are crucial in solving the puzzles while others are just random. Players need to play against the wits of the AI that can learn and analyze players behaviors and moving habits and takes actions accordingly. In this sense, this game also involves strategy to some degree. The improvement Hello Neighbor can make is mainly technical refinement.