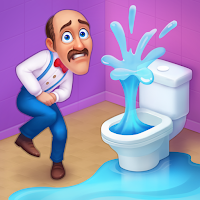 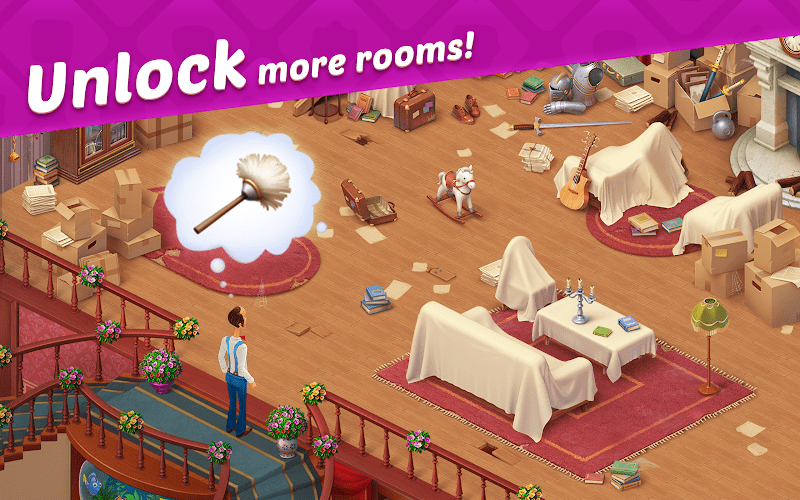 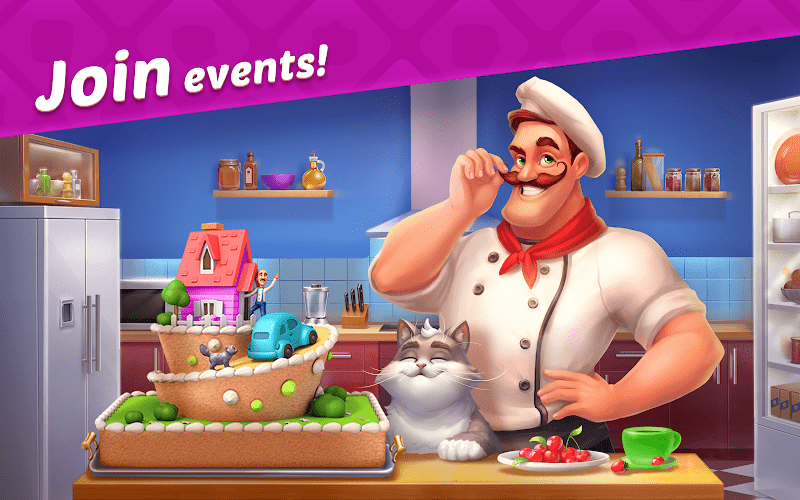 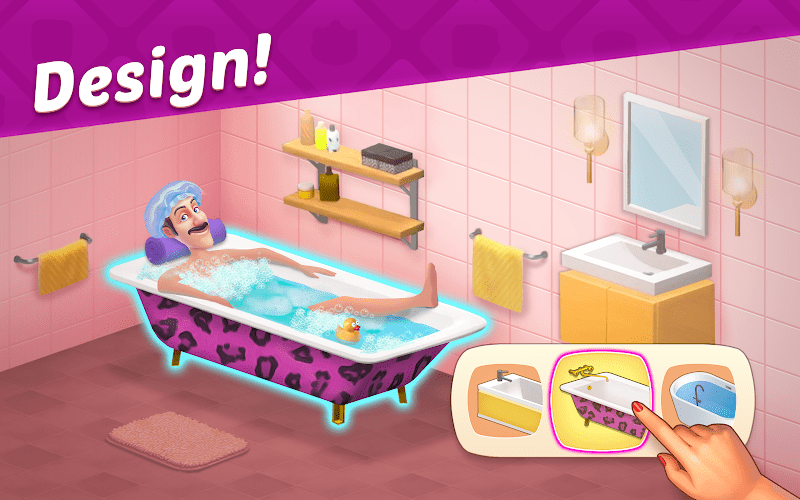 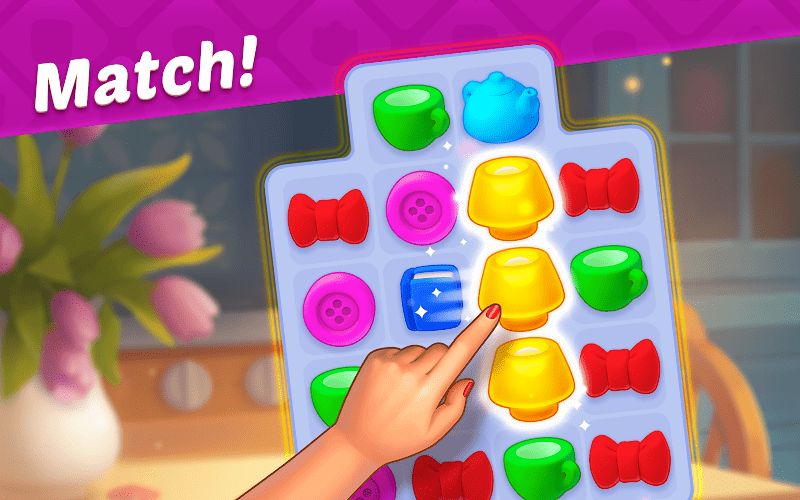 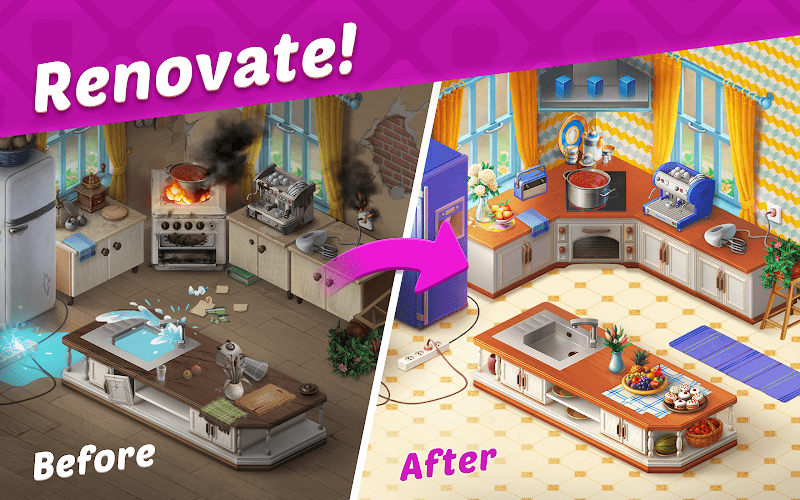 Homescapes is a puzzle-type elimination game. This game is a simulation management game that incorporates elements of cultivation. While Russian studio Playrix has had some successes in the past, it was Homescapes in 2016 that made the mobile gaming world recognize them. Homescapes is a large-scale business simulation mobile game that combines match-3 gameplay, narrative, and a few garden design elements. Players need to help Austin (the game character) complete the task of renovating his childhood home and prevent the big house full of childhood memories from being sold by his parents. In this process, players need to find ways to help Austin solve all kinds of troubles in house decoration. During this process, players can gradually integrate into Austin's family life and experience the warm family atmosphere and affection. This combination of elimination elements and story makes it stand out in the countless game market, and the game's revenue ranking also proves how popular it is with players.

The game's graphics are otherworldly and engaging. The Q version of the art design is used, and many of the details are also well done. Homescapes continues the consistent style of Playrix's previous work "Dream Garden". The overall picture performance is mainly based on the European and American Q-version cartoon style. It adopts a saturated color and a lively style. It uses common elements in the home such as lamps, cups, and buttons as game elimination. Elements that reflect the warmth of home. Although the overall color is too strong compared to the previous work "Dream Garden", the overall picture details are quite rich and meticulous, giving people a sense of harmony of a warm home from the inside out. The first is its fine art style, ranging from flowers and plants to furniture and decoration, with meticulous attention to light and shade and composition and layout. Secondly, the game UI design is unified and concise, which fits the style of the overall game, is lively and highly recognizable, and the button icons have obvious functions so that people can distinguish the meaning and purpose of each icon at a glance. In addition, the map scene of the game and the perspective of the various parts of the scene are relatively uniform, which seems to be a very simple layout to the layman, but it consumes a lot of time and energy of the creator and the developer. Like eating, sleeping, and walking, many things that often seem simple are very difficult to do. As for the decoration style, although the game is mixed with various styles, including European, Chinese, American, and modern, the categories are not consistent, but due to the different preferences and interests of players, the diverse styles can also impress different types of players. And the various styles can better satisfy players' desire to collect and sense of achievement, and become the driving force for many players to clear customs.

The music in the game has a taste of home, and the sound effects are very consistent with the theme of this game. The music of Homescapes is generally very suitable for the theme of home repairing. It is not only supported by the theme background music that fits the family atmosphere but also has unexpected little surprises. When you turn on the TV, TV programs will be played, and different sounds will come from the TV according to the content of the TV. If you do not turn off the TV, the sound will be integrated with the background music. When you step into the kitchen, from time to time, the sound of the program on the TV and the flapping of the wings of the parrot in the bedroom can be heard. Occasionally, Austin can be heard while playing his guitar, sitting on the couch, the strings staggered across his fingers and a stream of flowing notes pouring down. Game sound effects are like the UI on the screen. We often ignore the visual UI, and we are easy to neglect the game sound effects, but good sound design can serve the game and create a better game experience for players. The sound effects in the home are like this, Austin's cheers, the sound of the phone ringing, including the elimination of elements, the explosion of props, and everything is arranged just right.

However, in terms of gameplay, Homescapes is not special. In terms of overall gameplay, Homescapes is based on match-3, with house building and decoration as the core, which is not new in the current general match-3 market. Perhaps the previous work "Dream Garden" attracted a large number of fans with its unique and beautiful construction method when it first came out. At that time, it was regarded as a standout, but in the future market, the "match-three plus construction and management" gameplay Gradually expanding, pure match-3 games can no longer meet the psychological needs of players, and match-3 games with construction and management gameplay are not uncommon. The construction and gameplay of the game, the theme of which falls on a "home", is indeed more attractive. After all, "home" is an inescapable topic for most people, and it is the softness that most people yearn for in their hearts. What home can be made of is the creation of "Dream Home", but after playing through so many levels, the author likes the courtyard design the most. Maybe it is different from the closeness of the whole home. The author prefers the freedom of openness.

Overall, the in-game story isn't gripping, but it's engaging, moving forward at a gentle pace yet surprisingly enjoyable for the player. Players get not only the feeling of progress but also a great sense of satisfaction while helping Austin repair part of his house. The game's narrative as a monetization attraction is probably the most interesting thing we can learn from Dream Homes and Gardens. "Fantasy Home" drives players to spend money in a relatively simple and effective way, but players who don't spend money may occasionally find this game a little boring to play.

Homescapes is a puzzle-matching game set against a heartwarming story background. It is one of the Playrix’s Scapes Series. To restore a mansion by renovating the rooms, players need to solve puzzles. Players can show off their decoration skills in a variety of ways, including renovating the kitchen, living room, bedroom, hall, garage, and other parts of the house. There are thousands of decoration features available for you to build your ideal home. Homescapes is free for players to download and install. There are in-game purchases available. If you don’t want to do purchases, you can simply close this function in the settings of your devices. Homescapes now has 11,080,448 reviews with 4.4 stars out of 5 on Google Play. Ads are displayed in the game. In the following sections, both strengths and weaknesses of the game will be explored.

The game is popular among many players due to the following reasons. To begin with, the game’s plot is quite interesting. Players are supposed to help the hero named Austin to renovate the rooms in ways of matching, engaging their wisdom to help Austin out. Also, you are totally allowed to take full control of the decoration process, selecting items from a variety of choices to decorate the interior space of the house into your dream place. Moreover, the match levels are diverse with a lot of fun, adding to the boosters and combinations of every level, players will have great enjoyment during the gameplay. Furthermore, players can watch vivid characters interact with each other to socialize themselves in the game. In addition, players are allowed to keep a cute cat as their pet. Finally, players can share with and invite their friends on Facebook to join you in the creation of a cozy home.

However, it is not the whole story. The game is still criticized by some players for the following reasons. For example, the higher the level you reach, the harder you can successfully clear a block within 10 steps. Some of the levels seem even impossible to pass. What’s more, the frequency of updates is way too high. The game needs to be upgraded every few weeks, sometimes with new bugs added after the updates. Meanwhile, the promotion ads the game displays on various platforms seem different from the real content of the game. In the ads, the game looks more interesting than it actually is. Just like other matching games, the longer you play, the more possible it is for you to start to spend money on it. Finally, the in-game ads are somewhat annoying and bother the gameplay experience of players.

Anyway, Homescapes is a qualified puzzle match game with good graphics and gives players a great extent of freedom to make their own choices. The most fun part of the game is that players can choose from a variety of items to decorate the house according to their own will, making the game more than a match game. However, there are still some drawbacks to the game. The frequent updates don’t seem to fix problems at all but only add more trouble. Also, the promotion ads are kind of misleading for players and coaxes them to download the game, which is like a fraud. Lastly, the game seems profit-driven due to its in-app purchases and displaying of ads. Parents should be careful when their children play the game in case of potential financial loss. Otherwise, the game is generally a decent one. It is recommended to those who have plenty of time to kill and money to spend.