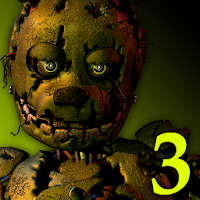 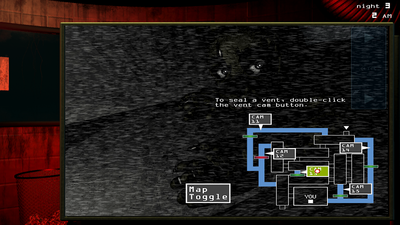 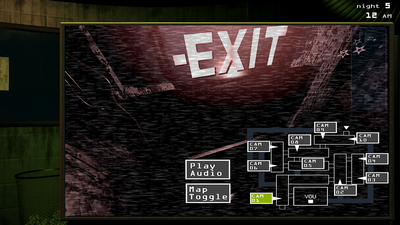 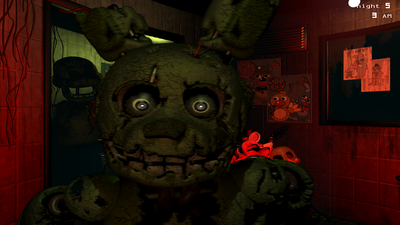 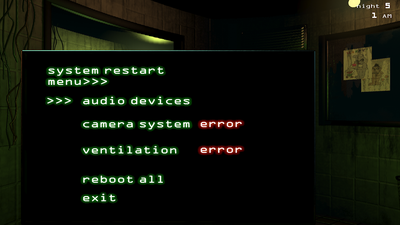 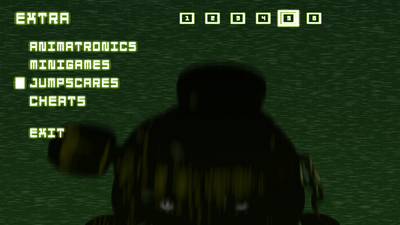 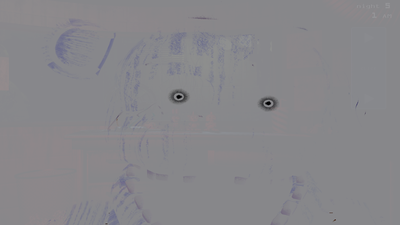 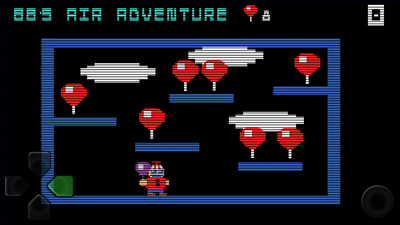 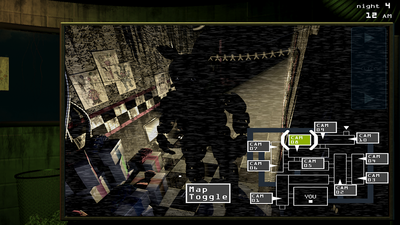 Five Nights at Freddy's 3 is an indie survival horror video game published by Clickteam USA LLC and the third installment in the game series. Five Nights at Freddy's 3 is set 30 years after the first game, and it takes place in Fazbear's Frights, a horror-themed attraction built by fans using props and memorabilia collected from closed pizza restaurants. So, there are still unsolved mysteries in the pizzeria to haunt and scare players. Players still play the role of security guards, and in the game must protect themselves from the animatronic animals roaming the attractions.

In Five Nights at Freddy's 3, the familiar animatronics players, such as Freddy, Bonnie, Pirate Fox, Chica, don't really exist. But after the first night is over, players will find a rabbit-like animatronic called "Springtrap". It looks very degraded and old.

The setting of Five Nights at Freddy's 3 is uncomplicated and original. Only one hall, one room, one table, one monitor and one fan can be seen in the Horror House attraction. Players need to keep vigils from midnight to 6 am in the game and need to monitor multiple systems at the same time. These camera systems cover the room of the Horror House attraction and its vents. Additionally, players can protect themselves by playing sounds through the audio system to attract Springtrap's attention. Springtrap is like a rotten rabbit and scary, but it's designed to be very realistic and fluid. It will sneak into the place where the player is working and stare at the player while playing the game. It's scary. Although Springtrap is the only real animatronic in Five Nights at Freddy's 3, players may find signs of animatronics like Freddy, Bonnie, Pirate Fox, Chica, and more. Although, they also look like they are waiting to jump up and scare people, but they are not true. They exist only as hallucinations. So they do not end the game, but make the game more terrifying. It's also one of the scariest things in the game. When these illusions jump in front of the player, the player must continue the game.

Because the doors of the rooms in Five Nights at Freddy's 3 won't close and the vents in the offices won't close, players' only hope is to keep the animatronics away from them. Players can distract the Springtrap by having a sound system with shutters that can be closed in the ventilation system. That's it until the second day of the game. If the scary rabbit reaches the player's office, the game is over.

There are a total of two endings in Five Nights at Freddy's 3 that players need to complete. The player's first task is to complete the mini games between the daily shifts in the game. Between these mini games is a good demonstration of how the Springtrap storyline came about. The second task is for players to complete certain mini games in slightly different ways at specific times. For example, a mini game where the player collects balloons and then jumps over a wall to find a cake and deliver it to a grieving child produces a very different ending to choosing to go through a vent.

Five Nights at Freddy's 3 is also very good visually and aurally. But players must carefully and carefully observe the screen of the monitor and try to see if there is any activity of electronic animals, and at the same time, be very sensitive to the sound of the game. Also, the gameplay becomes very tight. Players may feel that this horror game has done a very professional and more refined way of grasping the player experience. Because that animatronic team has become a phantom presence in the game, players will have more than one thing to focus on. This successfully adds to the horror and danger of the gaming experience. Therefore, I highly recommend this well-made horror indie game. The final direction of the game depends on whether the player finds and completes all the hidden mini games in the main game. So, it's very interesting. If players want to experience the heart-pounding excitement, don't miss Five Nights at Freddy's 3.

As an alternative horror mobile game, Five Nights at Freddy series, Five Nights at Freddy3 is finally out. The game continues the previous storyline. The security guard in the pizza shop needs to be on duty for 5 overnight shifts the shop. The scary thing is that the teddy bear in the shop is a terrifying robot. What we have to do is to avoid them through surveillance and successfully live for 5 days. The editor can't help but sigh, being a security guard is hard and scary!

First, the game's settings are still pretty scary. At the very beginning of the game, the opening scene of "My eyes are watching you" made our palms sweat. We had no choice but to bite the bullet and start this thrilling journey. The monitoring time is also from midnight to morning. At 6 o'clock, you can't let your guard down for a moment during these six hours. How many security guards are so tired in the world? When the "Teddy Bear" series became popular on major game platforms, similar thriller games emerged one after another. Of course, there are some works with good horror effects, but there is still a certain distance to surpass "Teddy Bear". When the game started, as usual, we received instructions on duty again, and we said a lot of it was nothing more than to make you do your duty, and at the same time interspersed with some game essentials, no, it is survival essentials, if you have passed the first two games. Baptism, then I suggest you just skip these long-winded explanations.

Moreover, the horror atmosphere of the game is still very strong. In Five Nights at Freddy3, the environment in the game is still mainly gloomy. All kinds of teddy bears are scattered in every corner, and it will not stop "working" when it is late at night. We can use the cameras installed everywhere to find The teddy bear is moving, but this hateful teddy bear moves very fast, it is very difficult to capture its trace, and its range of activities is not only the ground, but a ventilation pipe is also a place it likes to go, fortunately, the ventilation pipe is also Some cameras were put in, and we could close one of the vents to change its behavior. When we were looking at the camera, the teddy bear might have come in, and when our eyes returned to the duty room, a terrifying kiss hit the face. , sometimes it just damages your pipe sealing system or camera system, just takes a little time to repair it and you can go back on the road, what the hell is the mentally retarded pixel game that is interspersed after passing the level? Teddy Bear is the big BOSS in this game, and also our good friend. He accompanies us every day so that we will not be lonely on boring nights. me! Are you scared to pee? The teddy bear will always appear suddenly, often with flashing red light, as long as you see the red light, you are not far from death, and the player can do nothing but move the mouse.

Overall, Five Nights at Freddy 3's background is well rendered, with dim lighting and a setting where the player can't do anything to make the teddy bear appear terrifying. But I also want to rant about it, this game is so boring. As a horror game, it is very qualified, but its game content is boring. I also said before that it can't do anything except move the mouse, so how can you play such a game? Just wait for the teddy bear to come to you, and if he doesn't come you'll have to stare at the screen because there's nothing else to do. So, if you want to experience horror games, I recommend you to experience this game.