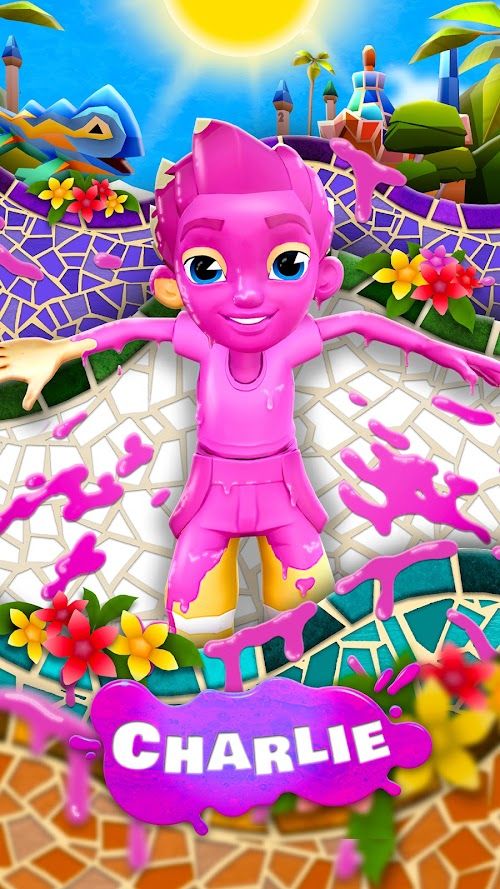 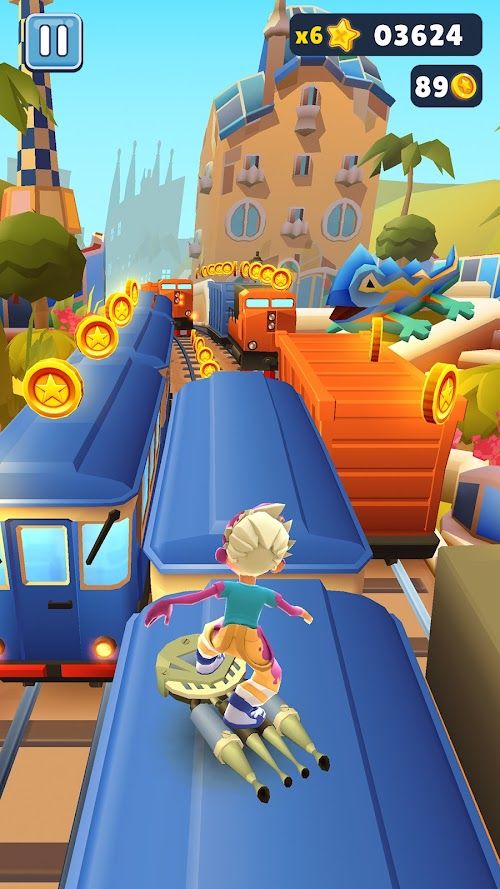 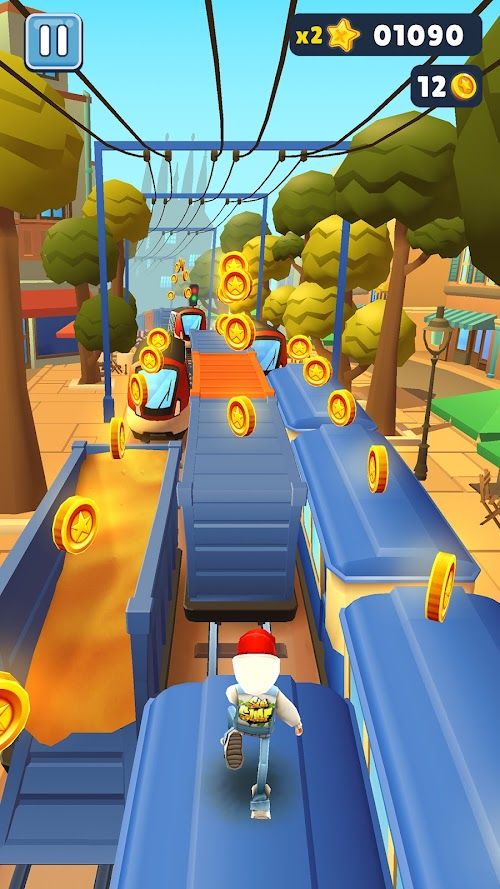 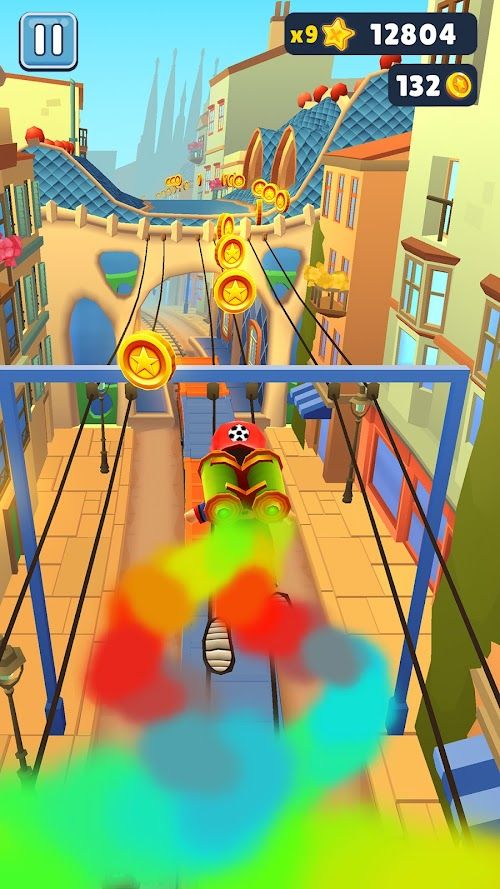 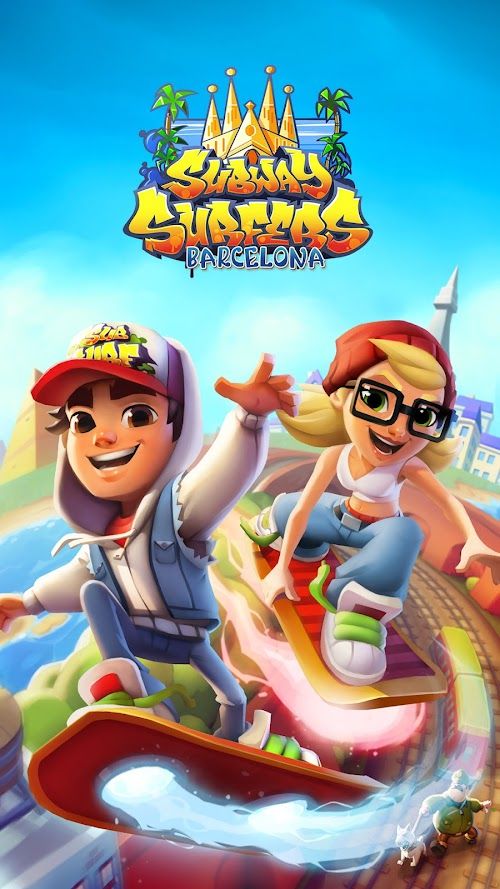 Subway Surfers is an escape game against a background of a railway station. Players play as the protagonist of Jake, Fresh, or Tricky and are supposed to be chased after by the railway inspector together with his dog. The reason why players go to the station is that there are tons of gold littered everywhere. Players should reap the gold without being caught by the safeguard. To play the game, players should control their mouse to let the character sprint and surf along the railway track while avoiding crashing into the upcoming trains. The game has a community of players in which they can communicate and play with each other. Players can enjoy the game not only by downloading and installing it but also play it online using browsers.

As an escape game, Subway Surfer is challenging and interesting at the same time. First of all, it requires players’ attention throughout the game, which invariably strengthens their concentration ability of them. Secondly, the graphics are so vivid and colorful, making players’ gameplay experience rather immersive. Thirdly, the game doesn’t require an internet connection so you can download and install it in order to play it offline. Fourthly, the community of players can socialize and play with each other, maximizing the joy of the gameplay experience. Fifthly, it is quite brilliant that players can always unlock new characters, which keeps the game attractive and raises the curiosity of players. Lastly, the game can be played by people of all ages, and it has educational meaning to children by enhancing their concentration. In a word, it is a fun game worth playing.

Yet, there is still negative feedback about the game. To begin with, ads are coming up now and then in the game, though they are skippable, it still more or less influences the gameplay experience of players. Meanwhile, Subway surfers have some glitches. For instance, when players try to get the character out from the train, the bug will appear. Some players even complain that the game is very laggy all the time. Moreover, the bonus and rewards of the game are less than expected even if you work really hard for it. Furthermore, the game involves real money if you want to play it well. Lastly, to play it on the browser, the mouse is a little bit hard to control for players, and the high frequency of using the mouse might break it. Therefore, if you want to play the game, think it twice.

Generally speaking, Subway Surfer is an enjoyable and challenging game popular among and recognized by the majority of players yet still with some issues to solve. On the one hand, its colorful graphics and interesting story background entertain players a lot. As an escape game, it also helps to strengthen the concentration of players. Next, it socializes players by encouraging them to join a community of players. The diversity of character choices keeps players curious as well. Lastly, it doesn’t require an internet connection to run. On the other hand, as a profit-driven game, it sets pop-ups now and then, and players who watch those ads get very little rewards of coins. There are also some bugs in the game waiting to be solved. To play the game well, you also need to send some of your real money. In terms of the operation, the control of the mouse is also troublesome. To summarize, Subway Surfers is an interesting and fun game developed for the entertainment purpose of people from all age groups. Still, players should consider the before-mentioned problems of the game while deciding whether to download the game or not.

Subway surface is a very classic subway runner game. The setting of the game is relatively simple. Many parkour games are set to be hunted down, but there are some innovations in the subway surfers. In this game, the protagonist of the game is Jack. Jack is a young man who likes street culture very much. He likes to scribble on trains and be chased by conductors, so the game's background setting is very interesting. This is a big point of game innovation.

First of all, the graphics and sound effects of this game are very vivid and relaxing. The style of the game is very cute and exquisite. The whole picture is mainly American street style, and the game uses a 3D stereoscopic visual angle to make the picture fuller and provide players with a better visual experience. Moreover, the scenes in the game are not static. Every time you enter, there will be different scenes, which is very fresh. The general parkour game is to escape desperately because of being chased, so the content, picture, and sound effects of many parkour games are very gloomy. But this game is different. It uses very bright colors to attract players' attention. I think the bright hues take away the tension in parkour games. In this way, even if the player accidentally hits the wall, he will not feel very annoyed and uncomfortable, because it is just a small mistake, even if the conductor catches up, he will only be taught a lesson and will not be killed or How. In addition, the sound effects in this game are mainly lively and joyful, and also have a certain richness. The sound effects of the game are very coherent and funny, adding a lot of fun to the players and making them more immersed in the game.

In addition, the content of this game is also very rich. There are many characters with different styles in the game, as well as different functions and interesting props. Players need to complete systematic tasks of higher difficulty in the game, which makes some players very satisfied. Because after completing this kind of task, players will get a super high sense of achievement and satisfaction, and the rich game connotation will make players unable to keep unlocking. I think this is the most addicting part of the game, even though we're hitting walls and trains a lot during the game. But we thought that to get higher scores and upgrades, we need patience and mechanism to operate this system. This is a very good game, the operation is simple, but it also tests the player's reflexes. Players need to quickly see the obstacles in front of them, and constantly adjust their posture and angle, so this kind of very rich game content and very sophisticated game screens have brought players a very good experience.

However, I think the biggest problem with this game is its operability. In terms of operation, there is nothing special about the Subway surface. Like many parkour games, players can run, jump or turn by simply sliding the screen. There are also some settings about trains and props in this game, so players can run in three spaces. The first space, the normal ground, is the same as any other parkour. The second space is mainly the roof of the train. Players can run on the roof of the train by opening the carriage, which increases the complexity of the game to a certain extent. In the third space, players can use props to achieve it. Players will fly up and move forward in the sky, so this picture adds a new perspective, and the playability of the game rises to a higher level. But these props need to be purchased with money or upgrades.

In general, the game setting of this game is very novel, the use of colors is also very innovative, and the players' parkour in three dimensions also increases the playability of this game. Players can download this game on Android and iOS. It is said that the computer version of the game will be launched soon, players can try it out.

The game is pretty simple, yet addicting. The roster grows basically every month. The flaws of course are cheaters and that your coin bonus won’t count through your score. And about hoverboards, the hoverboards are unique compared to its characters, which they did do a good job with, as some boards have unique abilities, like double jumps, super jumps, staying low, or just some cosmetics added, like trails. It will be pretty hard to unlock all characters, but it’s worth it! The scenery do look fantastic, and same is the music.

It’s just perfect. Rather easy to pick up, many cool unique abilities for hover boards, great scenery, and it has much fun to have, like collecting items from mystery boxes, trying not to collect any coins, or not jumping and rolling. For mobile game standards, it’s one of the best out there.

Subway Surfers, while not the start of endless runners, is a pretty good one. First will be the characters and the hoverboards, the character roster is insane, and some cool ones like Fresh, Yutani, King, Jake, Ninja, Tagbot, Spike, and Tricky. Don’t like a core crew character? There are sereval reskins of a few characters, like Pride Yutani. And not to mention the hoverboards, to spice up the hoverboards, they have sereval unique abilities to stand out of other hoverboards in this game, like staying low with the Lumberjack board, going super speed with the Monster board, or jumping super high with the Bouncer board. For the music, most music is really good, and they still keep you entertained, with new challenges for every new tour you go to, not to mention that the developers do bring back old tours so new players can enjoy them. The flaws however, there are sereval real money contents, and some characters are paid.

If you wanted a game that’s offline, cool board upgrades, epic graphics, big character roster, competitive leaderboards, a great endless runner, this game is for you. While a few flaws, it’s really good for mobile standards.