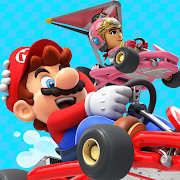 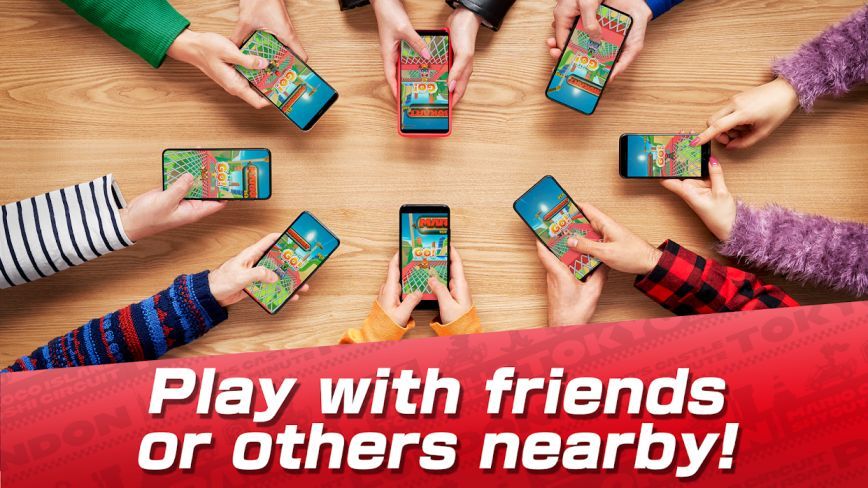 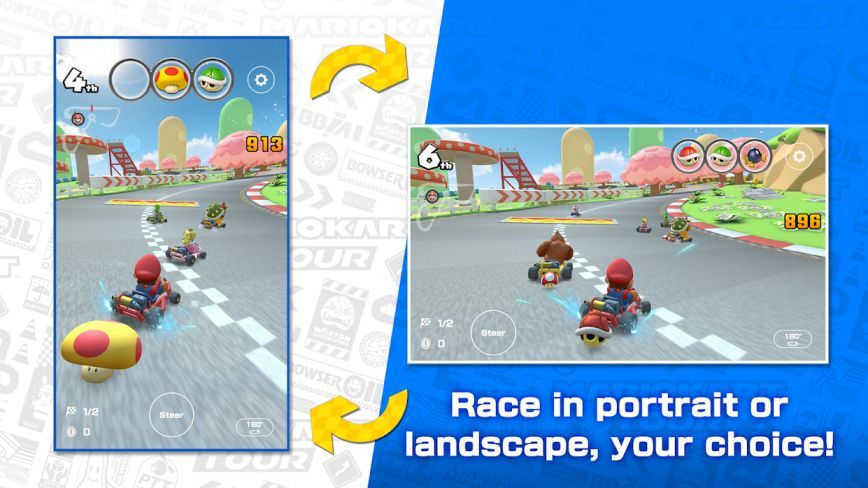 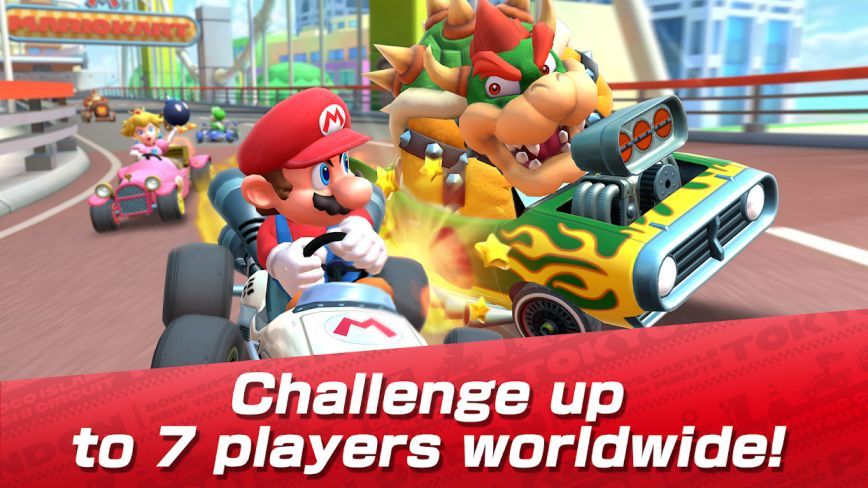 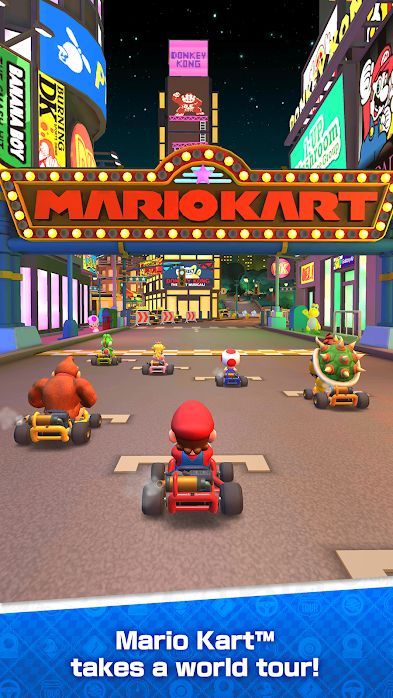 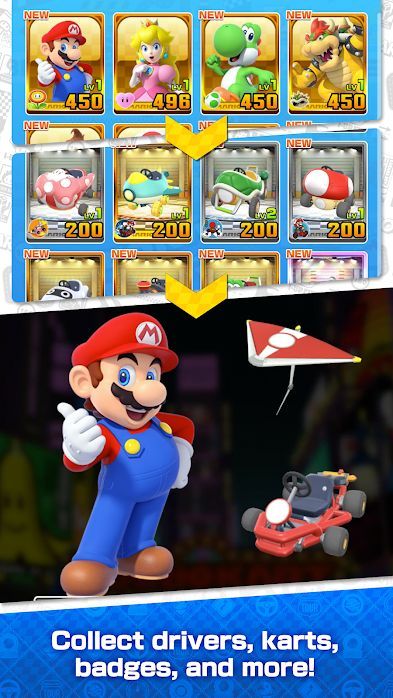 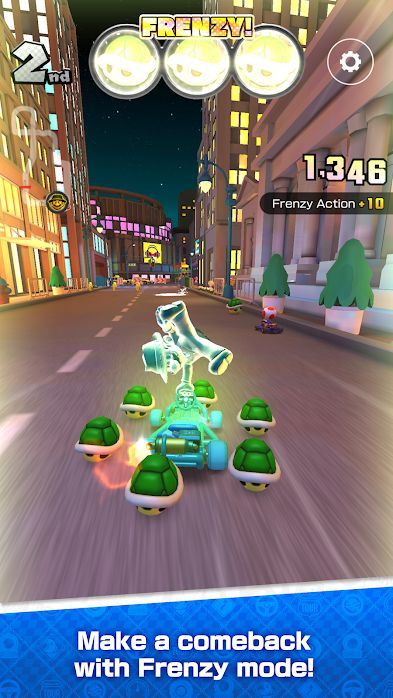 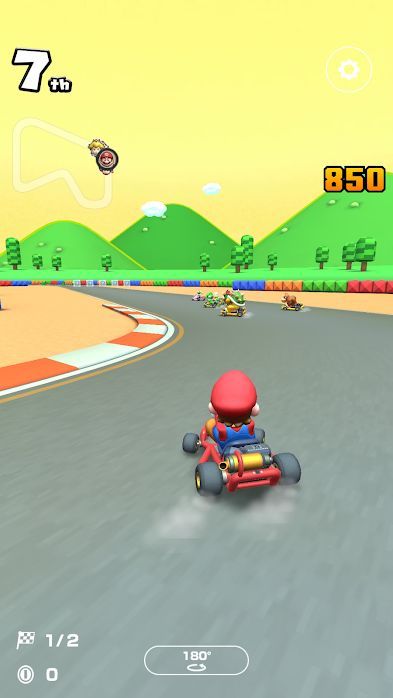 Mario Kart Tour is a racing game co-developed by Nintendo and DeNA, available on both iOS and Android platforms.

The graphics and maps are some of the highlights of this game. This game interface is also very familiar with the style of "Mario Kart", perhaps for convenience, players can now play not only horizontally, but also vertically. The entire screen of the game does not even have an operation button, and the direction is controllable. Players operate by sliding left and right. The operations such as drifting and drift acceleration when jumping that players were familiar with have become automatic, and even the use of props can be changed to automatic use in the settings. Because of automatic drift, it is impossible to control the time when the drift starts when cornering. Due to the cancellation of the brake, when the cornering is over 150cc, it will often hit the wall, and the difficulty is even higher than the previous 200cc.In addition, the map of the carriage is often three-dimensional, which leads to two types of forks: horizontal and vertical. The horizontal forks are sometimes very open, but the signs are very obvious, and sometimes (mostly) are close together. The vertical forks and Part of the mapping mechanism make the distance between the ground and the air track very different, and the vertical screen can take good care of the performance of this map. Take another racing game as an example: Asphalt racing, the same complex map (even more fork in the road), the same three-dimensional but not the height difference is not big, even the track with no operation at high altitude, use the horizontal screen. The game followed with more jumps, seemingly more complicated operations but still a game on the same plane: choosing a path forward through the slopes on the left and right of the track. Can Asphalt use a vertical screen? No, because it requires a wider lateral field of view.

Moreover, the game's operating feel is also very reasonable. Normally, steering and drifting are two operations. In console games, try to separate the two as much as possible to increase the player's "operational sense", including complexity, expressiveness, and finesse. On the mobile phone, various limitations led the production team to combine steering and drifting into the same operation: retaining the basic steering function (use at low speed) while letting the drift operation take over the steering function most of the time (in high speed). This method has been used in the Need for Speed mobile game a long time ago, and this game also follows this operation logic, that is, the operations that require steering are all replaced by drift. Why have this design? This kind of design makes players pay more attention to the map itself, rather than "what kind of curve and what method to drift". If you don't get the first place in the carriage, the reason must be that you are not familiar with the map (of course, it is more likely to be attacked, but this is not included in this question) rather than "insufficient cornering skills", the horse-drawn carriage (host and mobile game) tests more players' familiarity and boldness with the map. The whole process is smoother and the experience is better. Surprisingly, after playing a few more rounds, I found that the game doesn't feel that bad. After mastering the drifting skills, it is still very enjoyable to play. In the first few rounds, you can easily win first place, but when you meet players of a similar level later in the game, the feeling of hurting each other in the console version comes back. I have already played all the maps to five stars. I feel that the design of the mobile game version of the map is simpler than the previous console version. The three laps are changed to two laps, a narrower track, and faster refresh props. These settings also make The gameplay becomes tense and exciting.

However, on the whole, this is a kryptonite game, and this game is not friendly to players who are not kryptonite. There are many classic maps in the game, but you have to spend money to buy a golden driver's license or play a little bit later to unlock them all. Even if "Mario Kart" is made into a mobile game, it is inevitable to have a gold link. The characters, vehicles, and gliders in the game are unlocked by payment, and they are unlocked by drawing cards (even the 200cc model is paid.

Therefore, for players who like racing games and don't care about krypton gold, this mobile game is highly recommended.

Mario Kart Tour is a car racing game in which players could select different characters from the Mario series and different racing cars to compete with others in the competition. Players all over the world will participate in the game so you can challenge up to 7 players from different places in a single round no matter who they are. They can be your friends in the game or total strangers. That is to say, the game is multiplay, along with many rules adjustable. Moreover, other modes are available as well. You can also choose to play the individual mode or the team mode. The game features a variety of real cities renowned worldwide. In accordance, the characters will also combine the local features on themselves. To play the game, you need to move your fingertip on the screen to control the car. The game is free for players to download and install. There are in-game ads and purchases available. It requires stable internet connections and can only be installed on mobile devices that are compatible. What’s more, an account of Nintendo is a must. The game has a total of 2,034,885 reviews with 4.3 stars out of 5 on Google Play. The following section will talk about the pros and cons of the game.

In terms of the reason why Mario Kart Tour has such high popularity among players worldwide, it can be summarized as the following points. First of all, the game features classic car racing elements and the famous characters from the Mario series. Therefore, players would naturally feel a sense of familiarity with the game. Secondly, players can make use of a variety of powerful tools to power up themselves in Frenzy mode. Thirdly, players can have a chance to collect all kinds of karts, drivers, and badges by racing. You can even show off your honorable badges to others in the game. Fourthly, unlike traditional races in which the ultimate goal for players is to become the number one, in Mario Kart Tour, different challenges are set with the bonus offered in terms of the gameplay and tactics. Finally, the game has an online rank for which all players worldwide will compete in order to reach the top of the list.

But it is not the whole story. Though receiving quite a lot of positive comments from players worldwide, the game still has some negative comments due to some reasons. For instance, the control system of the game is not that user-friendly and a bit difficult for players to use. Moreover, the audio quality of the game is not that satisfying. In addition, the updates of the game are the way to frequent. It requires players to download new things almost every twelve days. Finally, compared with other Nintendo games, the graphics in this game is somewhat disappointing.

To conclude, Mario Kart Turn is a fun and addictive racing game featuring a variety of classic elements from the Mario series and newly added traits. Players have the freedom to make decisions and select many features of the game, including characters, karts, cities, etc. Also, the game can be played either in single mode or multiple modes. Furthermore, the gold medal is not the only goal of the game because it will set different kinds of goals of gameplay and strategies. Despite the drawbacks in the control system, graphics, and audio mentioned before, the game is recommended to those who love car racing games and those who are fans of the Super Mario series. Yet, since it contains in-game purchases, parents should warn children of the outcome of irrational conduct of in-game consumption.