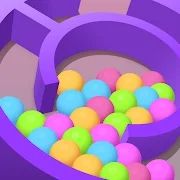 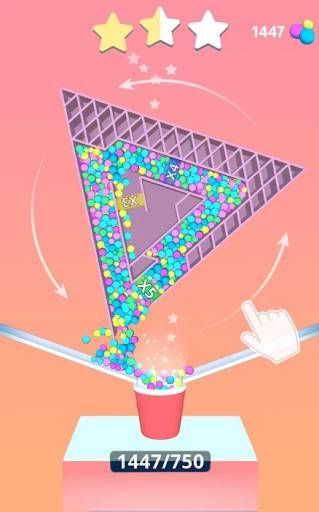 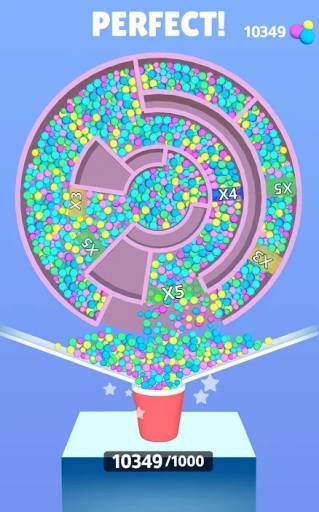 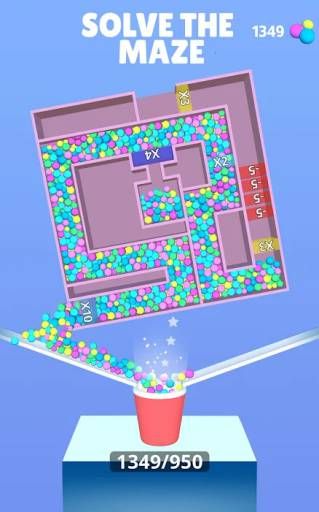 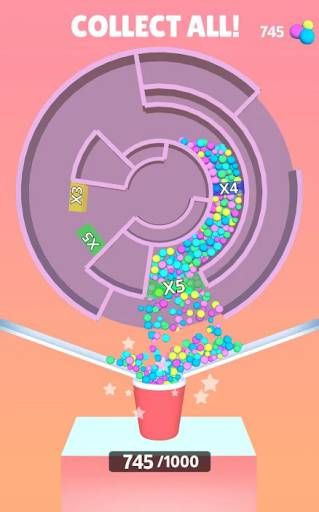 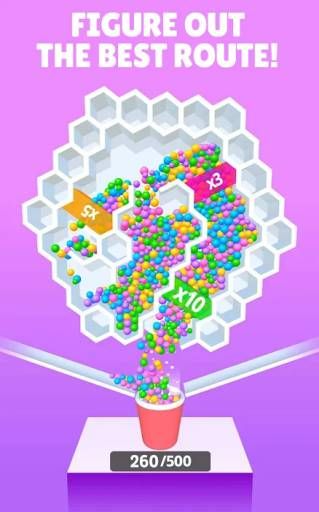 Multi Maze 3D is a maze puzzle game. To play the game, players need to collect balls by bouncing them into a cup through complicated mazes. Once players achieve to let the ball fall into the cup, the ball will multiply. The game is pretty addictive and enjoyable for players. There are skills and strategies available in the game, which are summarized by developers and other players. You can refer to those guides when you play the game in order to hit the highest scores. For example, you are supposed to use gates as frequently as possible if you want to get a high score. However, keep in mind, you can take advantage of those gates once. Also, you can break the chain if you can be able to put enough balls on it. The game features a leaderboard in which players with the top scores are listed above. It keeps you motivated all the time if you are an ambitious person who likes to be challenged and famous. Multi Maze 3D is a free game to download. It has different levels with all kinds of difficulties. To enter each level, you need to collect enough balls in the previous round. In the following part, the pros and cons of the game will be discussed.

Generally speaking, Multi Maze 3D is an addictive and fun game to play. Firstly, it is a good time killer involving no sophisticated rules. Players’ only task is to collect enough balls into a cup by spinning them throughout different levels of mazes. Secondly, the puzzle game has it educational meaning because it activates players' motivation to figure out how to get out from the maze into the cup. Thirdly, the game doesn’t require you to pay real money in order to play it well. So, it suits people from all age groups. Fourthly, the colorful 3D graphics are fun to watch. Finally, the game offers players many tips and hints for them to hit high scores, which makes the game pretty friendly to entry-level players. Therefore, the game is recommended to those who have plenty of time to kill.

However, it is not the whole story. There are also some complaints from players. For example, the game is criticized for being too repetitive as the advancing of the players’ levels. Also, the game will persuade you to buy new skins with real money. Furthermore, the game is pretty buggy in terms of its own rules. Sometimes players get scores that don’t make sense. The game is also riddled with advertisement which appears all the time, influencing the gameplay experience of players to a great extent. Lastly, some players even point out that the leaderboard in the game is fake because the scores listed on it don’t make sense. So, please think it twice before you decide to play.

In a word, if you are fond of puzzle games and would like to play mazes, then Multi Maze 3D would be a good choice for you. It is a good time-killer and doesn’t cost you a lot of money. It's fun to watch 3D graphics is quite eye-catchy. It encourages players to rack their brains and has educational meaning as well. It also offers players a complete guide once they join the game. Yet, the repetitive gameplay experience, the annoying pop-ups, and the fake leaderboard leave a negative impression of the game on some of the players. Despite all the flaws listed above, Multi Maze 3D is a fun and interesting game suitable for all age groups. So, if you are interested, you can download and install it right away.

Multi Maze 3D is a mobile puzzle game offered by Crazy Labs by TabTale. It is free for downloading on iOS and Android platforms. The gameplay and goal are straightforward with easy game control mechanism. Players need to spin and tilt a wheel board with a maze layout and colorful balls in it to let the balls drop into the collecting cup below the board to gain scores. In each play, players need to reach or exceed the preset goal points. The more balls are collected, the higher the score will be.

In order to generate a better score and funnel as many balls as you can, players need to first have a big picture of the maze layout through observation and necessary calculations. That way, players are more likely to plant an efficient navigation route and doge possible cul de sacs. The maze usually contains different gates that are either multiply or decrease the number of balls going through them, which mean players need to try to get through multiplier ones and avoid minus gates. However, sometimes a bigger multiplier gate is waiting after a small minus gate, in which case, players may as well take a minor loss for a even lager gain. Plus, they can also skillfully tilt the wheel and only divert a small batch of balls into the minus gates to further lower the loss. When the balls are falling into the receiving cup, players can see the real-time filling number and the goal number. Even when the goal is met, players can still keep filling the cup so that they earn a better final score to boost their star rates of the level. Star rates relate to the leveling up of the game progress and brings bonus coins. Sometimes when players are not satisfied with their star rating result, a last second restart option can be taken to re-do the game again. As players progress through the levels, new puzzle formats will be unlocked, although the basic game rules and control stay the same. At the end of each level, there is a “boss level”. With the coins earned from watching adds and 3-star rates, player can upgrade some features and skins from the game store.

This game is fun with easy to follow rules and control mechanism. The bright color scheme and minimal strategy requirement make it a relaxing time killer for everyone. However, the maze sometimes malfunctions and multiplier gates do not correspond to the right number of balls. Besides, the boss levels are not that different from regular levels throughout the game, which in general tend to be repetitive even there are some pattern changes. Another problems I noticed is that the color scheme of the game differs and distorts from device to device, which can be major minus for the game design and programming.

Multi Maze 3D generally receives an above average market rating. Its App Store performance sits somewhere around 4.3 out of 5 point, with most players reporting a fun and simply gaming experience and control method. However, just like many other casual games, most players complain about the excessive ads that keep popping up throughout the gaming. In my opinion, watching ads in the game is not a worthwhile thing because the reward coins players earned are mainly used to purchase skins and decorative items, which do not help boost their performance and score in any real way. Thus the rewarding and upgrading system of the game are quite flawed to some extent, and the fun and satisfaction acquired from the game can easily wane down as a lack of stimuli and boosters that spice up the game.