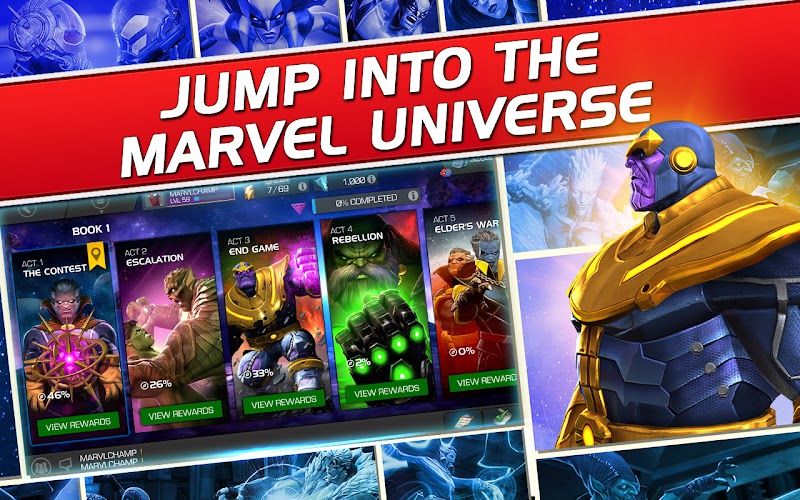 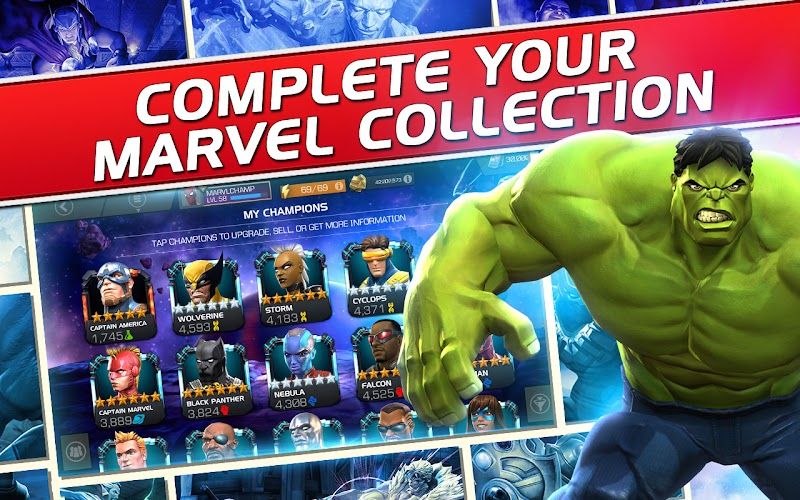 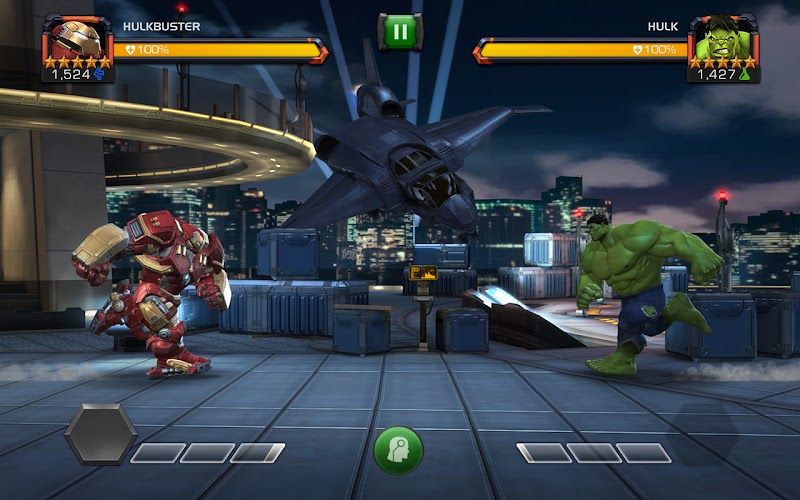 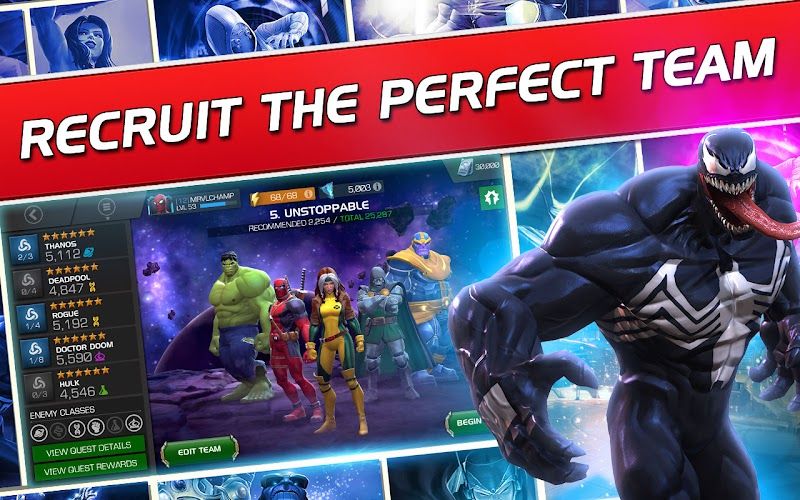 MARVEL Contest of Champions is a classic action fighting game developed by Kabam. This game is adapted from Marvel's classic comics, named Marvel Super Hero Contest of Champions. This game involves many Marvel superheroes, and many figures from the Guardians of the Galaxy, Avengers, and X-Men are all visible in the game, which is bound to be an unprecedented melee. The superheroes in the game each have different abilities and attributes, and there is a relationship of mutual growth and mutual restraint. For example, when Wolverine and Captain America meet narrowly, Wolverine will add an additional 15 points of attack due to the advantage of attributes. On the contrary, Captain America will be weakened accordingly.

The MARVEL Contest of Champions game mode is more attractive. In this game, players need to pay attention to the cultivation of hero levels while using heroes to fight. The acquisition of heroes adopts the more mainstream form of gashapon, and players can randomly get one from the purchased black crystal. There is a star rating between heroes and heroes, and heroes with high star ratings willfully suppress heroes with low star ratings in their initial abilities. In addition, with the continuous advancement of the plot, the difficulty of the game will also increase. At this time, the player needs to use the space stone obtained in the battle to upgrade the hero level, otherwise, it will be difficult to compete with the enemy on the same stage. There are two game modes, PVE, and PVP, in which PVE can be divided into two categories: regular tasks and special tasks. The regular task is similar to the story mode, which is one of the most basic game modes of the game. Players need to lead the superheroes (up to 5) to complete nearly 100 game levels under the guidance of the plot. Compared with regular tasks, special tasks do not have too many differences in game form, but only increase the difficulty of the choice. Compared with the PVE mode, the PVP mode of fighting games should be the place that players relish. There are four PVP modes to choose from in this game: 1V1, low-star 3V3, high-star 3V3, and full-star 3V3. Players can choose freely according to their hero strength, without fear of being crushed by big R.

However, the operation of this game can be regarded as its most important shortcoming. The pleasure brought by the sliding touch is far less than the virtual joystick. In the game, players need to tap the screen to release normal attacks and continuous skills, slide the screen left and right to retreat or raid, and long-press the screen to defend or hit hard. Players can accumulate energy when attacking and being attacked, and when the energy bar is full, they can release nirvana. Due to the lack of support for virtual joysticks and buttons, "Marvel Heroes Fighting Game" is too thin in operation. Although there are many operation methods, the performance of move connections is somewhat rigid. From the perspective of the moves themselves, many heroes share a set of templates. Except for the special skills, the other moves are the same. This approach is a bit too perfunctory. From the perspective of game players who really enjoy fighting games, "Marvel Heroes Fighting Game" may be just general work that is still qualified.

In general, the lack of operation variety can not completely affect the overall quality. Marvel Contest of Champions' detailed character modeling, varied scene design, and rich game content are still the charm of this work. What's more, the fact that everyone's familiar Marvel superheroes are moved to the same battlefield to fight is enough to cheer. In the terms of Marvel fans and even ordinary players, this game can undoubtedly be regarded as a great gift.

Marvel Contest of Champions is a fighting game featuring a multitude of world-famous Marvel Super Heroes/Heroines and Villains. In the showdown, Iron Man, Spider-Man, and other superheroes will be at your disposal. You will summon them to engage in the versus-fighting in order to reach the top and become the Ultimate Champion. Players can assemble a team from a variety of superheroes choices to start the quest. You can enjoy the most amazing battles between the most popular characters in Marvel comic history. Fight against powerful and challenging villains like Thanos with your team, all on mobile devices. The game is free for players to download and install. In-game purchases are available. It now has 3,174,712 reviews with 4.3 stars out of 5 on Google Play. The game features so many renowned characters from Marvel Comic that it has a large fan base at the initial stage of its launch. It has been awarded the “Editors’ Choice” award. In the following part, both advantages and disadvantages of the game will be analyzed.

On the one hand, the Marvel Contest of Champions is welcomed by players for the following reasons. To begin with, players can interact with their friends in the game by teaming up with them so as to build an alliance. Meanwhile, you need to make tactics for your team to win in battles. You can compete with other alliances all over the word online. Moreover, players are the decision-maker of their own teams. You can assemble your team according to your own thoughts, choosing the most powerful superheroes from the rest of the characters. Start a journey of conquering to fight against super villains and mysterious rivals, and your ultimate objective is to stop the complete damage of the universe of Marvel. Furthermore, you will have a lot of fun by collecting, leveling up, and managing superheroes and villains in order to attain bonuses. New characters of champions will be added to the list of the game continuously. Ultimately, players will embark on a journey with fantastic plots exactly from the Marvel comic story. You can meet with many familiar locations, characters, features, etc, making it a good chance for Marvel fans to review what has happened in Marvel Comics.

On the other hand, however, there are still some complaints about the game. First of all, the game is blamed for being weak at controls, support, and matchups. The game is not that user-friendly when players try to control the actions of characters in the game on a mobile device. Secondly, some features like the crystal seem ill-functional. Thirdly, the game might unexpectedly cancel some of the characters already owned by players without permission. Finally, the in-game purchases are quite costive.

Therefore, the game should be analyzed from different perspectives in order to see it in a more rational light. The game is indeed excellent because of its amazing cast, interesting storyline, and colorful and detailed graphics. However, it still has some drawbacks like its poor operational controls, slow feedback from the support team, and unreasonable matchups in the gameplay. Also, the game can cost you an arm and a leg to play it well. Parents should prevent children from using the in-app purchases feature in order to avoid possible financial loss. Developers and the support team of the game should refer more to players’ feedback so as to improve the game to a new level. Overall, the game is quite challenging and fun for Marvel fans to play. It is a good time-killer and improves players’ teamwork ability and strategic thinking.