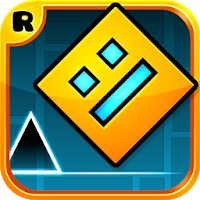 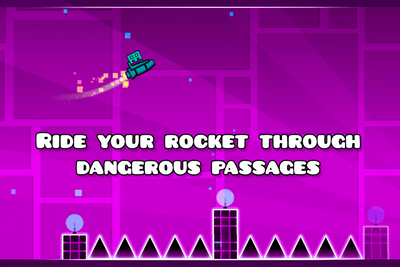 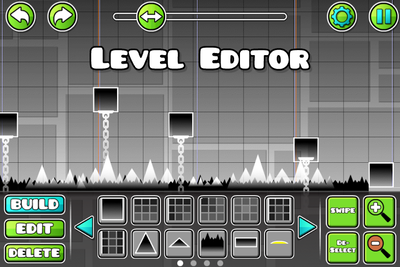 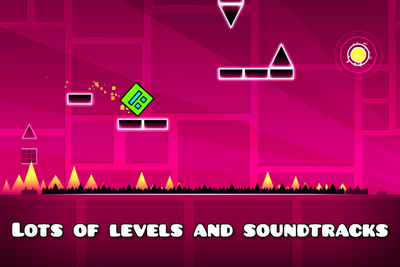 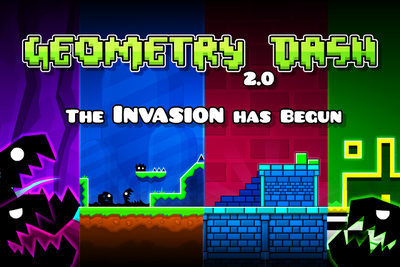 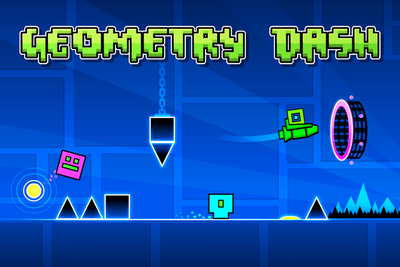 As a rhythm-based platforming video game with 21 levels of difficulty, Geometry Dash meets great popularity worldwide. The challenges plays can face in this game vary from easy to nearly impossible mode. In this game, players can navigate an icon to the rhythm of the music on different levels. Meanwhile, they need to evade dangerous obstacles. Apart from the original 21 levels, it has over 77 million custom levels developed by amateur players with the assistance of its creation system. Moreover, various mods exist in additional level versions, including a search bar, maps, the hall of fame, etc. As for the currency used in the game, there are player coins, stars, secret coins that can be acquired from chests, original levels, and additional levels. It is available not only on iOS and Android stores but also on Steam. If you are a person who likes music and love challenges, then give it a try.

As a game designed and developed for all ages, Geometry Dash boasts many advantages. First of all, it is a user-friendly game that has simple operations, making it easy for new players to begin. Secondly, it features unique soundtracks with high quality at each level, which can encourage players to continue to explore and enjoy excellent music at the next levels. Thirdly, players can create and share their levels of difficulty with the community of players as an editor. Fourthly, with the progressing of the game, players can unlock new elements of icons and graphics to customize their characters. Fifthly, players don’t need to worry that their loss in the game might affect their performance in the game because they can improve their skills in the practice mode. Last but not the least, unlike other profit-driven games, Geometry Dash doesn’t encourage players to spend their money to play the game.

Though being a popular game enjoying a good reputation and recognition worldwide, Geometry Dash is still a game mainly for entertainment purposes mainly in nature. It requires players a good habit of self-control and good management of time in order to not spend too much time playing the game. It is rather addictive and long-term use of time on the screen might cause irreversible eye-sight impairment. Therefore, parents should pay attention to their children’s time spent on this game. However, it would be an amazing game if players don’t overindulge in it since it has a required time limit of three minutes for each round. Anyway, it is a fun and interesting game, which can offer players all kinds of challenges and a sense of achievement.

In sum, Geometry Dash is a successful game. Most of the game reviews it receives are in a positive tone. It is a game easy to begin with for newcomers, and it is available for all age groups. Though sometimes the levels of the game might be extremely hard to challenge and make players feel discouraged, there is always a chance to improve using the practice mode. The game is suitable for all age groups varying from children to elders. It is regarded as a good way to lessen frustration. The soundtracks of the game are also good for players to listen to. The design of the game interface is good-looking. Also, it has few bugs and it allows you to customize your own level. Players can play with their family members without worrying about the appearance of improper content from the game. Yet, parents should still keep in mind that it is a very addictive and challenging game, which might cause their children to either be addicted to or rage at the game.

Geometry Dash is an action-adventure game that players can download and play on PC, Android and iOS. It is said that this game is a test of human reflexes because players need to operate in a virtual geometric world, such as jumping and sprinting, to avoid dangerous traps and obstacles, so as to reach the end. It sounds good to operate, but it is very difficult to win and improve the level. This game is said to be one of the hardest games in the world. Although it has a very clear goal, the process is indeed very difficult and dangerous, and players need to constantly overcome many difficulties to reach the end.

First of all, the music in this game is very emotional. The music in the game is very nice. When I played this game for the first time, I was attracted by the background music of the game. At that time, the song was called seven seas. It was a very nice and very classic piece of music. That song is so good, I've listened to it many times. In fact, in the game, the music of each level is very good. It is difficult for me to express the goodness of this kind of music in words. I just feel that the game developer has a very high level of aesthetics. He seems to know what we like. don't like anything. And the sound quality of this game is very good, the music fluency is very good.

Secondly, I personally feel that the game screen is quite good, and each level has different elements. In the game, the small cubes will change into various forms, such as spaceships, speedboats, and various aircraft. These flying things can sometimes fly backward and forward, so the players in the game are not boring at all, but feel very interesting. Although the game's customs clearance process is very difficult, players are always getting more frustrated and more courageous, and they like it more and more. Because the feeling of clearing each level is very fulfilling, it seems that your efforts have been rewarded accordingly, so every time you complete a difficult level, you will get an overwhelming sense of accomplishment and pride, which is also the reason why many players continue to Motivation to play this game.

In addition, the graphics of this game are very delicate and beautiful. When I was playing games before, because I saw some levels had black and white backgrounds, I thought that all the levels were very simple black and white backgrounds, but it wasn't. Some levels are very cool, for example, there are some crystal effects, flame effects, the color background is very dazzling, and the style is very high. Some are even about the style of embroidery, which is very technological. I think the graphics of this game are very attentive, and it really attracts a lot of players.

But this game takes a long time to get the fun of the game. Because if you are just playing this game, you are likely to be intimidated by the first two levels to uninstall the game. I have been in touch with this game for a year or two, but I still only get to 12 levels. This game is really difficult. It takes many attempts to get through a level, so he tests people's endurance, self-confidence, and IQ very much.

Overall this game is very fun and challenging. I think we can exercise our ability by playing this kind of game, improve our hand and eye coordination and reaction ability and so on. Therefore, the game itself is very sophisticated, so it is recommended for players who like to play sprint games or action-adventure games to try this game.

This is the best