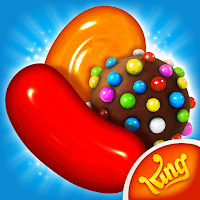 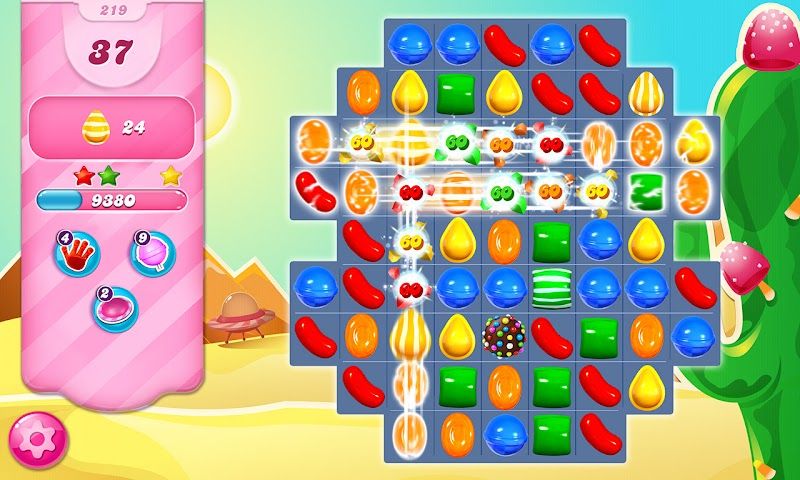 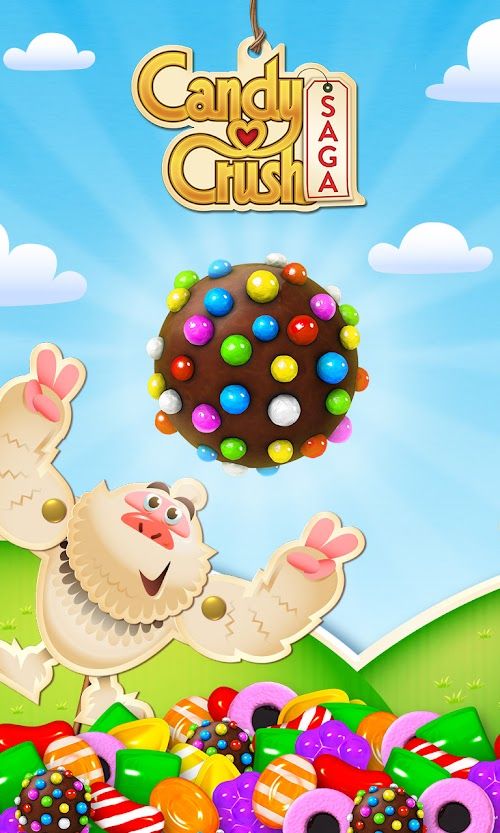 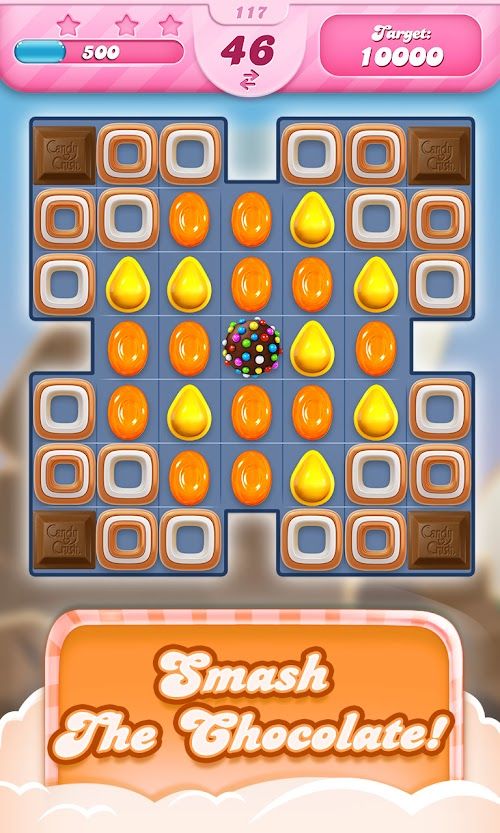 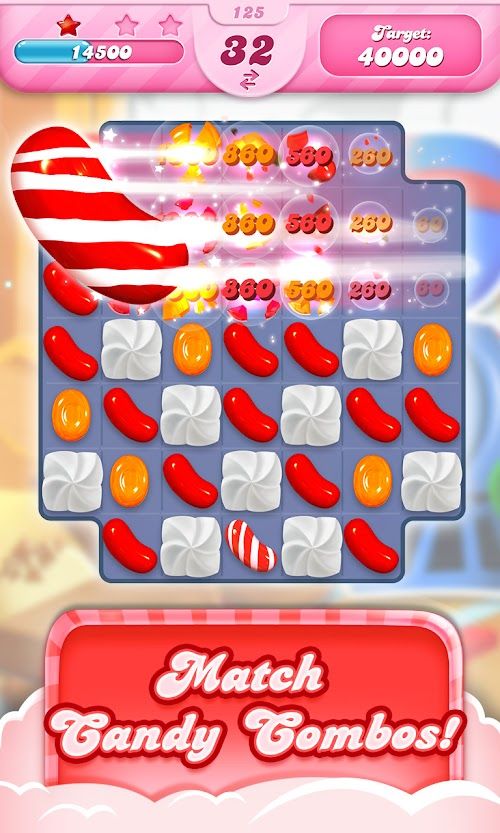 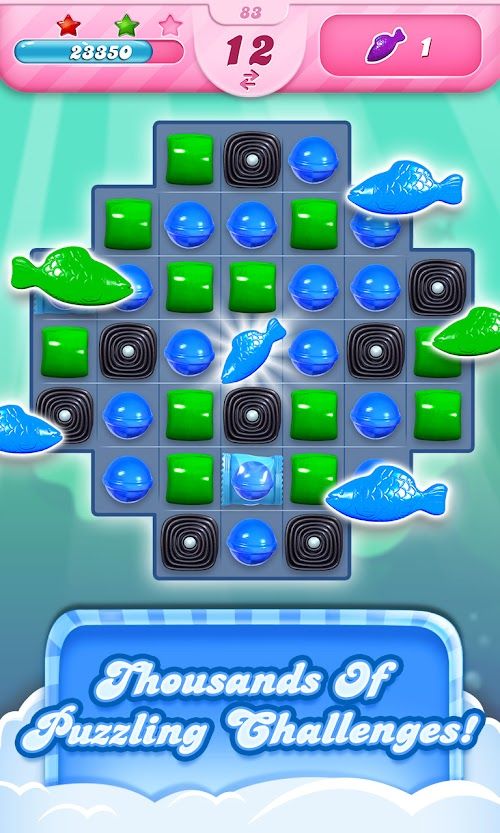 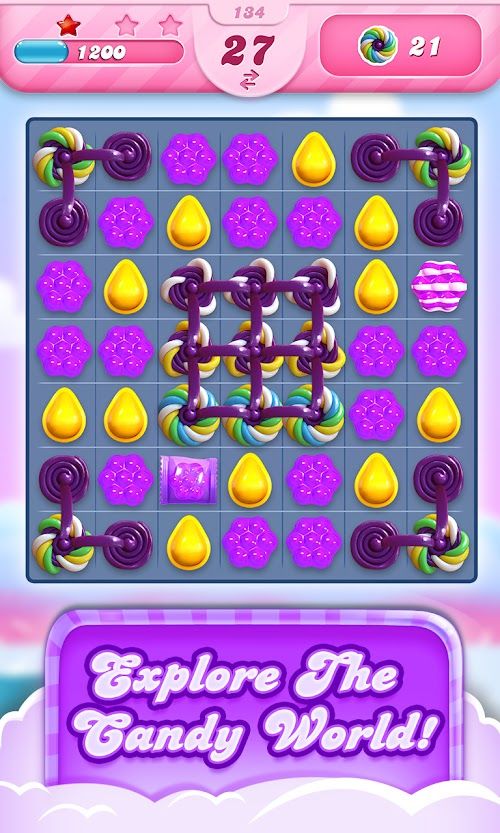 Candy Crush Saga (also called as Candy Crush) is a gem cube game developed by British online game company King Digital. Candy Crush Saga is themed around candies. The basic rule is to line up three to five identical candies to eliminate candies to score points. The game requires different candies to be grouped together and detonated, which will produce different effects and powers. This game has a synchronization function, and the game progress can be switched between different platforms. Candy Crush is one of the most popular games on the Facebook platform with many players.

First of all, this game fully integrates social elements and can meet people's social needs. In fact, if the user binds the game to Facebook, then in the long game line of Candy, the player can see that his friend has arrived at that stop. Different from the general style of just the list, placing the player's avatar on the game map is consistent with the game experience of "Monopoly", which is more vivid. When we reach a new level, players can see how many points their friends have achieved in this level, and if they surpass their friends, players can share their scores on Facebook to show off. So having a friend ranking attracts you to keep making progress. In addition, the game also has relaxing background music, cute game prompt sounds, less detailed graphics, and friendly scene settings such as fruit and jelly, which will make the game more interesting. Moreover, the game is generous with points, which can easily make you and your friends widen the gap. The time-limited switch is adjustment, and all related settings have a degree of relaxation. In some important links, such as when the game enters a new chapter, you must get a "ticket" given by a friend to pass. This restrictive condition has become an extremely important part of game viral marketing. Of course, some players will register some Facebook accounts to satisfy themselves in order to clear the level.

Another advantage is that the game can be synced between PC and mobile games. Unlike many social games on Facebook, Candy has seized the new opportunity of the mobile terminal to synchronize the game progress of the mobile terminal and the PC terminal in real time. For example, when a player reaches the 10th level on the mobile terminal, when he is sitting in front of the computer, as long as he opens the Facebook web version of the game, he can continue the 10th level of the game. When summing up the experience, founder Zakoni believes that the reason why they focus on casual games is that such games are suitable for both PC-side social platforms and mobile devices. Combining the two, users can have a seamless gaming experience anytime, anywhere. In many countries or cities, as long as there is a mobile phone signal and data network on the subway, you can play this game during the subway ride. In addition, Candy Crush can also be played offline, and the data will be updated when it is online. On the contrary, for many games, especially action and interactive games, once the game is interrupted, it means that all previous efforts are lost. Such games are not suitable for playing in such "emergency" environments, such as on the road or on the subway. But Candy Crush does not have this problem, because players can leave first if they have something to do, and can come back when they are done with business, and the game is still waiting for you there. How convenient is this! For example, a friend of mine runs a shop, and he usually plays Candy Crush when there are no customers. When a guest arrives, lock the screen of the ipad, wait for the guest to leave, and then continue. This is an online game mode. So this game can be played on mobile phones, on PC, online and offline, so it can capture a large number of players.

However, the main disadvantage of this game is that the props are more expensive to set up. The reason why Candy ranks No. 1 on the App Store bestseller list and has become an app with excellent income among built-in paid apps has a great relationship with the setting of props. Because every time you enter some new links in this game, the game will unlock various magical effect props. Due to the variety of gameplay settings in the game itself, users are often faced with a dilemma, either re-pass the level, or they need to pay to buy some props. This has also led to complaints from users, because for most players, it takes a lot of money to play the game to a very high level.

In short, although it costs a little to improve the game progress, I think this game is worth playing. It is easy to get started, difficult to master, and players can get a very good experience when they are constantly handling many levels. Interruptible while playing the game, people can play the game in fragmented time waiting on the bus and subway, allowing smooth switching between game and work modes, and also play the game with friends in their spare time.

Candy Crush Saga is an amazing puzzle-solving game popular among numerous fans worldwide. Only by moving candies at your fingertip, you can start a yummy journey of puzzle-solving. Enjoy the upgrading to a higher level and a sense of achievement. All players need to do is to motivate their wisdom to take smart steps in getting candy combos, and they will also attain the rewards of cascades in tasty rainbow color! Plan, Switch and move candies in order to match at least 3 of them in a row. Strategically utilize boosters to remove additional blocks of chocolate. Break through the records and experience the great joy of passing thousands of levels in a single puzzle game. The game contains ads and in-app purchases. It is available for Android and iOS systems. The game now has 33,513,949 reviews of 4.6 stars out of 5 on Google Play.

The game is generally fun to play. You can choose to play alone or invite your family and friends to play the game with you to see who will win. Therefore, the joy of the game can be shared by others as well. Also, you can sync the progress of the game between all your devices pretty easily only if you connect devices to the internet. The game is free for all to download and play despite its in-app purchases, yet you can still turn off the purchase function in the settings. There are thousands of levels available for players to challenge, making it continuously interesting. Moreover, the game is still keeping updating its levels every half a month. Furthermore, there are many chances for you to attain rewards in the game. For example, you can keep a daily check of the Daily Booster Wheel and spin it so as to get rewards for free. What’s more, you can also challenge time-limited tasks to upgrade faster. Lastly, in the game, you have the opportunity to choose between a variety of modes like Clear the Jelly and Target Scores to keep yourself entertained.

However, it doesn’t mean Candy Crush Saga is a perfect game. The game is somewhat expensive in terms of in-app purchased items like boosters and other additional features. Thus, parents should be cautious to decide whether to allow their children to play the game or not in case of possible financial loss. In addition, there are some paid features and bonuses in the game that seem no use at all. So it seems that the game set all these bonuses and paid features to ask players to spend money. Lastly, the ads displayed in the game are kind of annoying because they stop players to close them and returning to the game. Sometimes the ads get in the way of players and even make it hard for players to make moves in the mid of the game!

To summarize, Candy Crush Saga is a comparatively satisfying game recommended to players worldwide. It enjoys a great reputation among a great number of fans across the world due to its pleasing attribute. The game is free to play and features thousands of challenging levels, offering players many ways to gain rewards. Meanwhile, it still has some flaws and is complained by players as profit-driven. To make the game more welcomed by players, the support team and developers of the game should stand in the shoes of players. Finally, pay attention to those players who lack self-control, because they might spend too much money on this game to do in-app purchases. Parents should remind children of the possible financial loss as well. Despite the disadvantage mentioned above, the game is fun and interesting to play.