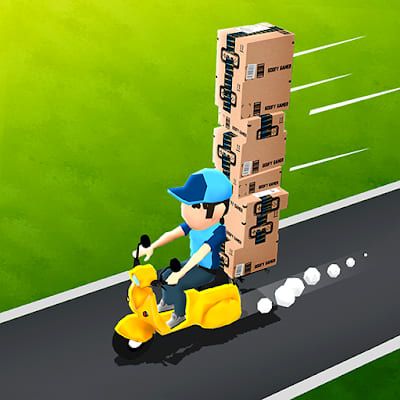 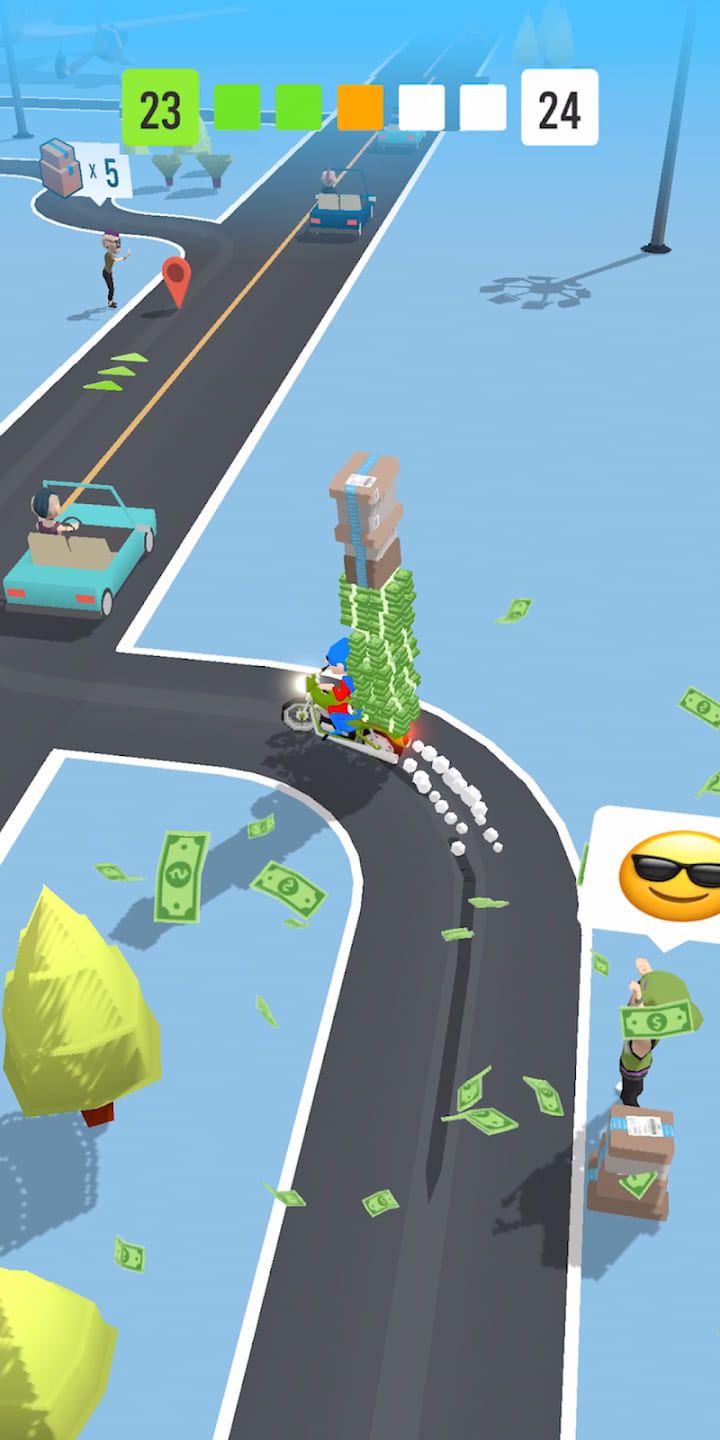 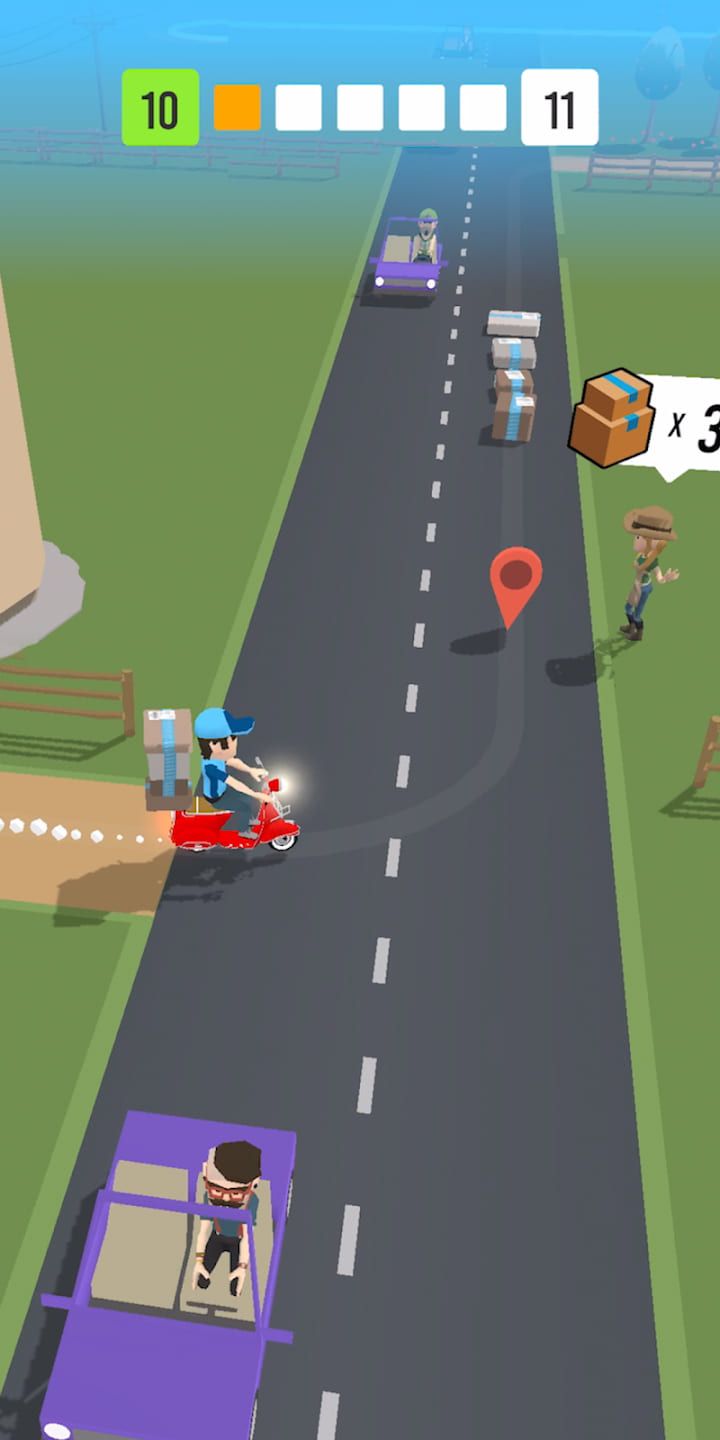 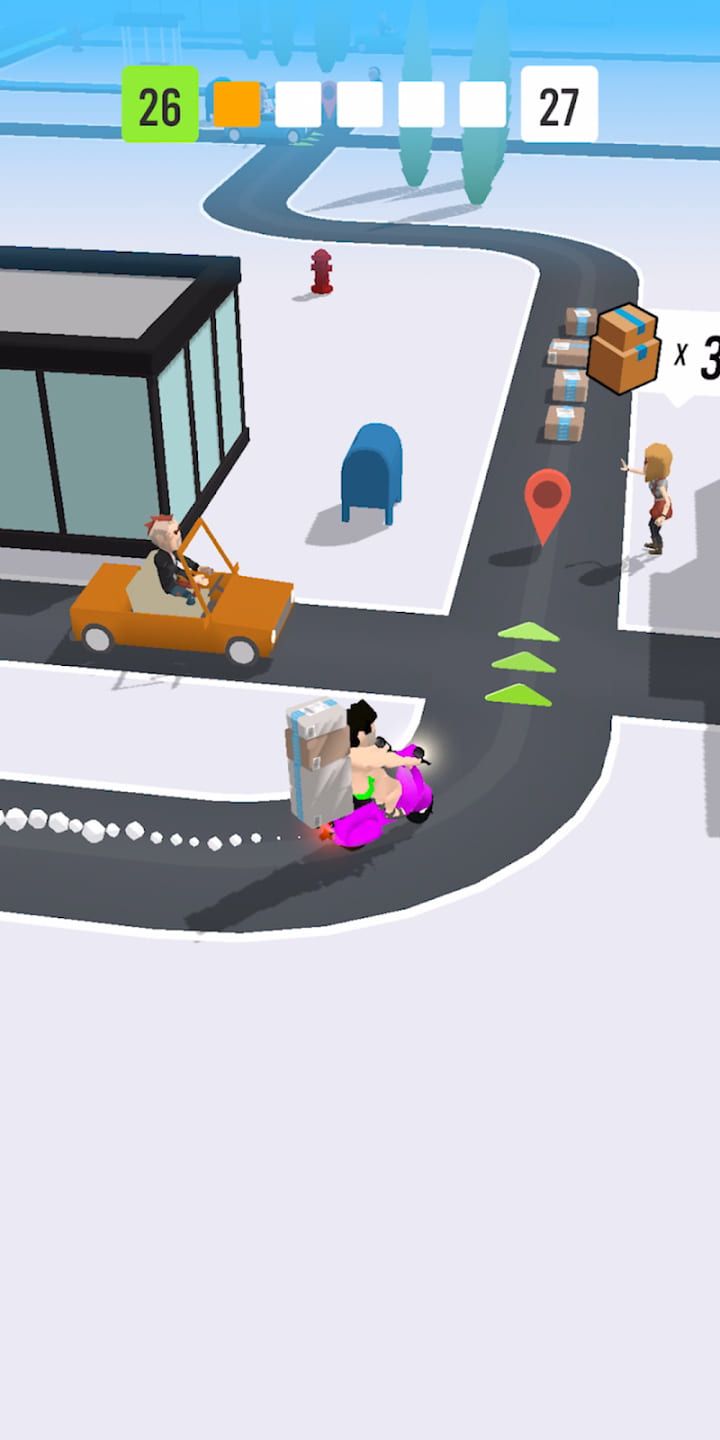 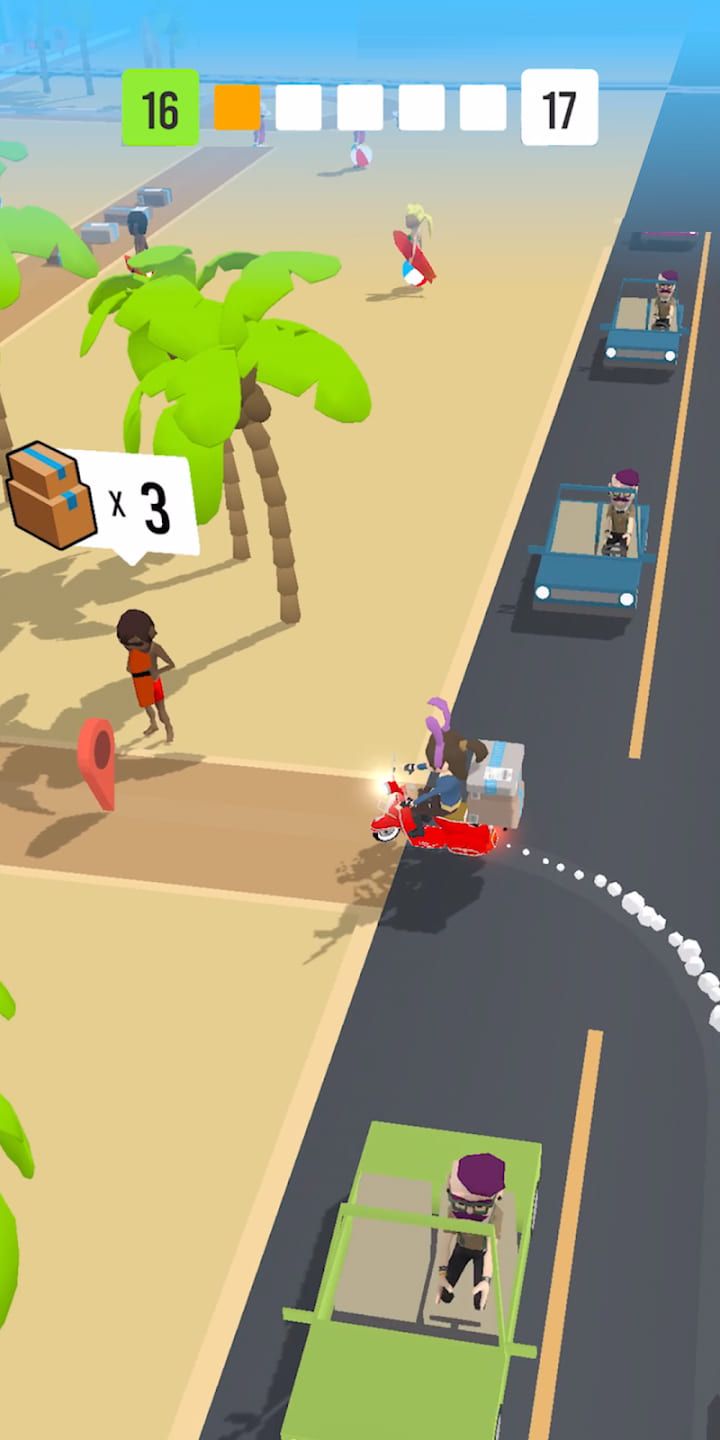 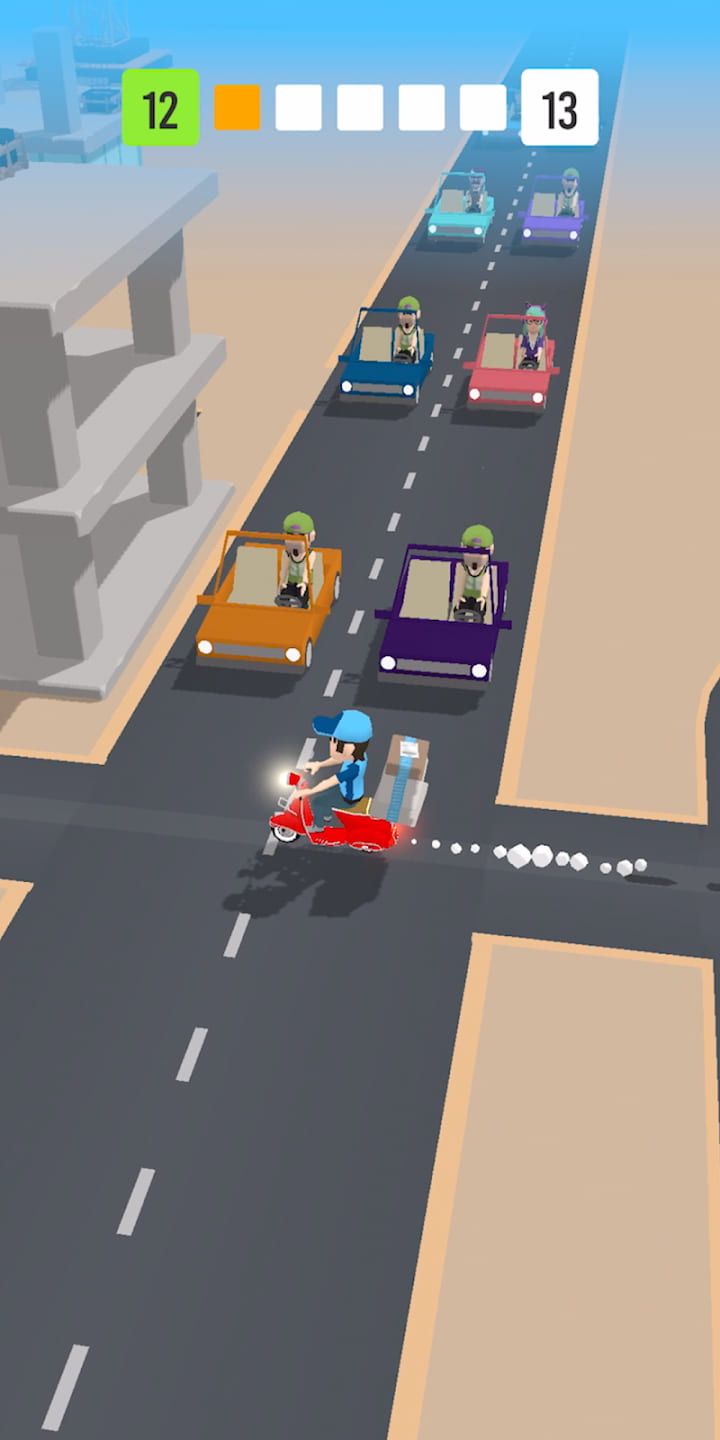 Deliver It 3D is a mobile game developed by Voodoo. This game has many users in many countries and regions. It is a fun casual game with express delivery theme. The game scene is used three-dimensional skills, not only has good art quality, good game perspective, but also enhances the game experience, making players feel very exciting and nervous during the riding process.

First of all, as a very casual game, it also tests the player's reaction speed and ability. The theme of this game is very interesting. The background of the game is that the player plays a very powerful courier in the game. The courier rides his motorcycle on the streets of the international metropolis every day. The courier needs to deliver the express to the customers according to the route specified by the system, while avoiding the cumbersome pedestrians and motor vehicles. This game is essentially a classic management and motorcycle game, it is a mobile game that tests the player's reaction speed. Players need to tap the screen with quick eyes and hands to let the courier move forward quickly, constantly shuttle between pedestrians, cars and even trains. When encountering obstacles, they must avoid obstacles or emergency brakes to avoid traffic accidents. On the premise of safety first, we provide customers with faster delivery services. Couriers can win great rewards, such as upgrading their riding outfits and buying more fashionable items. In this way, even the reward mechanism brings a lot of motivation to players and a very good game experience.

Moreover, the game's screen uses a 3D stereoscopic style. The courier in the game screen, the pedestrians on the road and the traffic vehicles coming and going all make people feel very realistic and vivid. It's as if the player himself is traversing the real street. The traffic scene is also very realistic and detailed. There are traffic lights everywhere on the road, there are many people on the crosswalk, and there are cars, motorcycles and bicycles on the road. This seems to bring gamers to the real road, and even the white car exhaust from the small motorcycle will bend as the motorcycle turns. So the graphics of this game are still very detailed and realistic. This game combines the delivery process and the delivery process. It is presented through the 3D graphic style of the game, which is very innovative.

But the actual experience of this game can only be regarded as a reluctant innovation, it is not a real innovation, because its core gameplay has not made a big breakthrough. In fact, games with such a theme are still relatively common in the market. They are still driving fast on the road by driving a motorcycle, avoiding traffic accidents, reaching the destination to get rewards, and so on. It is very similar to many games on the market, the difference is that it gives more meaning to the format. Merchants connect the fast-moving theme game on the road with the business model of delivery and express service, so that such a service and such a game process have certain social or economic significance. Moreover, although the 3D art style can bring some new ideas to the game, it will also easily cause players to have a sense of visual fatigue, resulting in a repetitive boredom. I think it's a good classic gameplay, but it's still a little far behind in terms of innovative changes.

So in general, if you like racing or motorcycle games very much, then you should also love this delivery game, and the developer of this game is Voodoo, if you are this company fans, then you must try this game too.

The Description of Deliver it 3D

Provided by Voodoo, Deliver it 3D is another typical racing game with recognizable Voodoo features. This online mobile game can be downloaded and played for free. Players can obtain the app on Android and iOS platforms. As a racing game, Deliver it 3D adopts a classic gameplay and mechanism as many other successful Voodoo titles. In this game, players fulfill the task of a delivery man who has to navigate his vehicle with packages on it to deliver them to his customers. The gameplay incorporates a number of conventional elements in racing games: the racing lane(route), vehicle, obstacles and rewards. In order to successfully complete each individual objective in each running session, players have to navigate the delivery vehicle carefully on the route that can involve different curves and turns with unexpected obstacles. Players must avoid being crashed into any of those obstacles, otherwise the game progress would be ceased and the level must be restarted all over again. The game is progressed on a stage-based rhythm. Each stage includes various levels with different difficulty degrees. As players move from one level to another, their vehicles will be upgraded with higher capacity and performance while the complicity of the driving route and the challenge levels of obstacles will also be increased. Like many other casual racing game, the motion control is important. Deliver it 3D adopts a very simple-to-follow and responsive game control. Players simply uses “tap” “hold” and “release” to drive, change directions and deliver packages. After each successful package delivery to the waiting customer, players can collect their game rewards. Fulfilling the target delivery goals enables players to move on to the next level.

1. There is no offline mode of the game for players who do not want to watch ads.

2. The view angle of the game can be a bit too close for players with smaller screens.

Deliver it 3D is a typical racing game with identifiable Voodoo styles. It integrates the core elements of a racer with easy game control. Unlike another type of popular racing games where players need to select portals on the run, Deliver it 3D does not include gate-choosing mechanic in its game play. Instead, it introduces customers on the driving path. This feature makes the game different because customers are not always waiting at the end of the path. Instead, they are often scattered randomly alongside the path, which means players have to pay attention to where their target is and how should they get there safely. Therefore, it is not a simple beginning-to-end playing angle but a multi-target game. This game can appear to be rather easy at its very early stage where the route is plainly straight without many curves or obstacles and the delivery goal is simple. However, as players move forward into later levels, the difficulty picks up noticeably. Players can experience a diverse range of routes with different patterns and turns. Meanwhile, the obstacles are increasing with unexpected hurdles. Besides, the positions of customers can also get trickier. On the other hand, the vehicles of delivery also get upgraded and the number of packages increases as players level up. Players find this game very playable and engaging because of those unexpected types of routes and obstacles. Each time they play, they enjoy something different. However, as a free racing game, some players do complain about the amount of ads and the unavailability of offline playing.