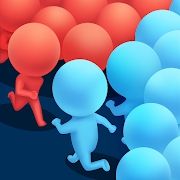 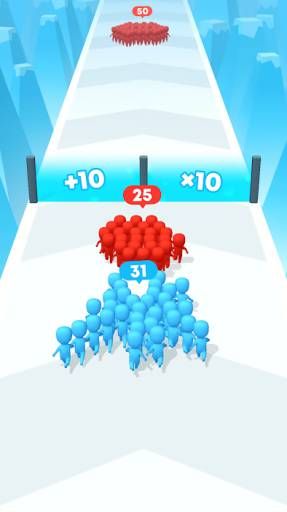 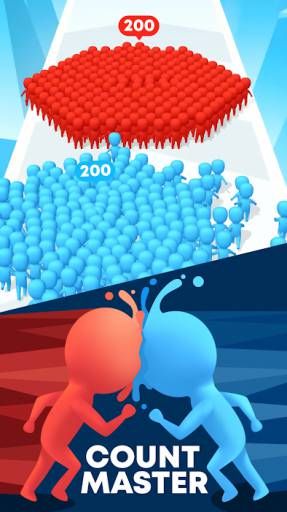 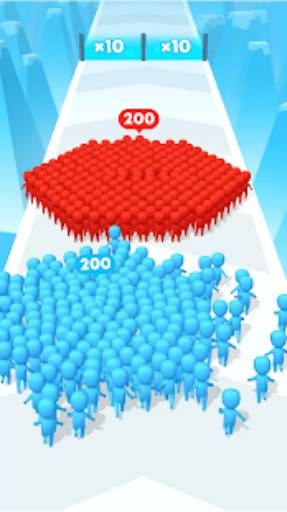 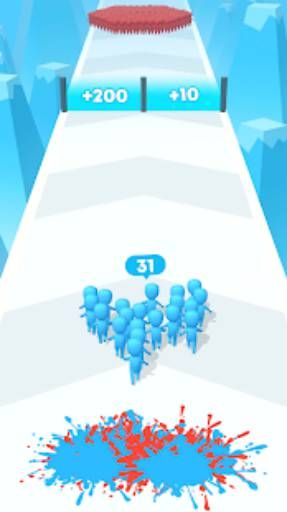 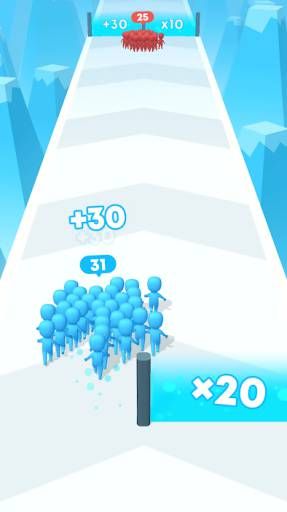 Count Masters is a puzzle parkour mobile game, which is also a very popular mobile game that can support vertical screen recently. While playing this game, players can control a large number of stickmen, experience various levers in the level to expand the number of people, and even breakthrough the many obstacles to reach the bottom of the parkour game. This game perfectly combines puzzle gameplay and action gameplay, allowing players to calculate which lever to choose to get higher returns while running.

First of all, what I think is fascinating about this game is that it combines puzzle game elements with action game elements. Although Count Masters is not the first hyper-casual game that combines puzzle and other gameplay, it is indeed the first mobile game that combines puzzle and parkour. "Bounce and collect" released by Voodoo half a month ago has integrated puzzle gameplay into the casual gameplay of bouncing balls, which not only makes the seemingly simple level instantly soar in difficulty, but also greatly improves the player's sense of happiness and investment. Compared with the drop experience similar to placement, the combination of parkour, popular gameplay, and arithmetic puzzle operation, will have a far-reaching impact.

Secondly, the gameplay of this game can be described as colorful. The gameplay of Count Masters can be described as a combination of hand and brain. Players need to control the stickman to move forward while choosing a route that can maximize the number of the stickman. Avoiding various obstacles and choosing the best route must be guaranteed. Therefore, the player's ability to use hands, eyes, and brains is directly exercised. Although it is just a simple parkour game, it makes the player's experience very rich because its operation is very simple. Players only need to slide a few buttons, they can operate the stickmen, let it avoid dangerous barriers and keep moving forward. It requires players to use both hands and brains at the same time and practices the ability of responsiveness. For example, in this stickman-themed mobile game, players can enjoy the most casual and exciting game in the master stickman fight. This game is definitely more fun than you think, with a variety of fighting styles. The modes can be freely chosen, and each level is very exciting! There will be a lot of traps in the required scene, and you must not enter these traps when you pass the level. The changeable stickman game is here to allow you to fully demonstrate your abilities!

In addition, the scene of the game is aslo not bad. According to many game players, there's nothing wrong with the graphics of Count Masters. This game has a bright scene design, simple character modeling, and refreshing color matching. As well as the randomly changing color application and the seemingly casual but actually tense gameplay are all necessary conditions for players to be obsessed with it.

However, from my personal actual experience, the basic gameplay of "Count Masters" is not very different from similar parkour mobile games, and the innovation needs to be strengthened. If it is said that single parkour is easy to make players feel fatigued due to the fact that the goal setting is too simple, then adding fusion gameplay with real-time computing requirements based on casual gameplay will be much more attractive to users. It seems like that the typical example: 1+ 1 is greater than 2 for theoretical validation.

In general, I think if you like to experience parkour games if you have a soft spot for puzzle games if you are a fan of fusion gameplay, then please don't miss this "Count Masters" easily.

Count Masters is a casual running combat game available on iOS and Android platforms with different providers. It is a simple mobile game with easy control and mechanism. Players lead a crowd of people (or known as your “units”) to run through obstacles and confront units from the opposite direction, and engage in the final boss fight to win the castle. The goal of the game is straightforward: to dodge terminating obstacles and avoid as many hiccups as you can while you are charging your army through the clash with energy units. In order to achieve this goal, players need to make right decisions on the choice of gates, doge or engagement of obstacles and enemies. However, this game is highly competitive and players should get ready to confront a face to face fight with the rivalries anytime anywhere.

The essential element of your game strength lies in the size and number of your units formation. That means the more stickmen you enlist in your formation, the more advantages and better chances you have to beat other players and win in the end. There are a number of ways to increase your unit number. At the beginning of each run, players will be given a certain number of initial units, depending on the coins they have from the previous run. Then once the game kicks start, players can choose to pass different gates with different effects. Some of those gates are units multipliers (x2, x3 or even x5) while others are units minus. Players must watch out and careful navigate their units into the advantageous multiplier gates and avoid the minus ones. However, sometimes it is unavoidable to encounter the minus gates, in which case, players have no better choice but to run through it while usually a multiplier gate is waiting afterwards. Besides, there are different obstacles in front of your units at various locations. Sometimes they’re on the sides of the path and easier for players to doge. Other times, some of them are in the middle of the lane and it’s unlikely for the entire formation to get around the object. Then players just run through such obstacles which are usually less detrimental causing an affordable unit loss. However, it should be noted that some type of obstacles is terminal— the spikes, which once been stepped on would end the game immediately and players must return to the starting point all over again. Yet players can pay attention to this type of hazard a head of the time and press the green button to deactivate the spikes before they bump into them.Apart from the obstacles, the most exciting part of the game is to engaging the opposite running units. The clash is won by outnumbering the rivalry, which explains why choosing the right multiplier gates is important in helping maximizing the units size. At the end of each level, there will be an epic boss fight. Plus, players can also use the coins they earn to buy special skins or gain a larger starting units formation.

This game is very easy to play without a complicated or in-depth strategy. Players do need some calculation and decision-making through the game, yet most of the obstacles come with clear solutions. The game control is minimal and mobile device friendly too. With short gaming sessions and fast-paced and intensity, players can enjoy a blast of excitement during the game.

However, this game like many other ultra casual games, lack a little more twists and turns. The gaming mechanism can be a bit too straightforward and repetitive after a few levels of gaming. What’s more, the upgrade options are mainly limited to skins and decorative things, which does not help improve the gaming performance. Therefore, I would suggest this game works for those who prefer a short-time blast of excitement with minimal plots and strategy involved.