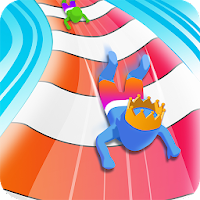 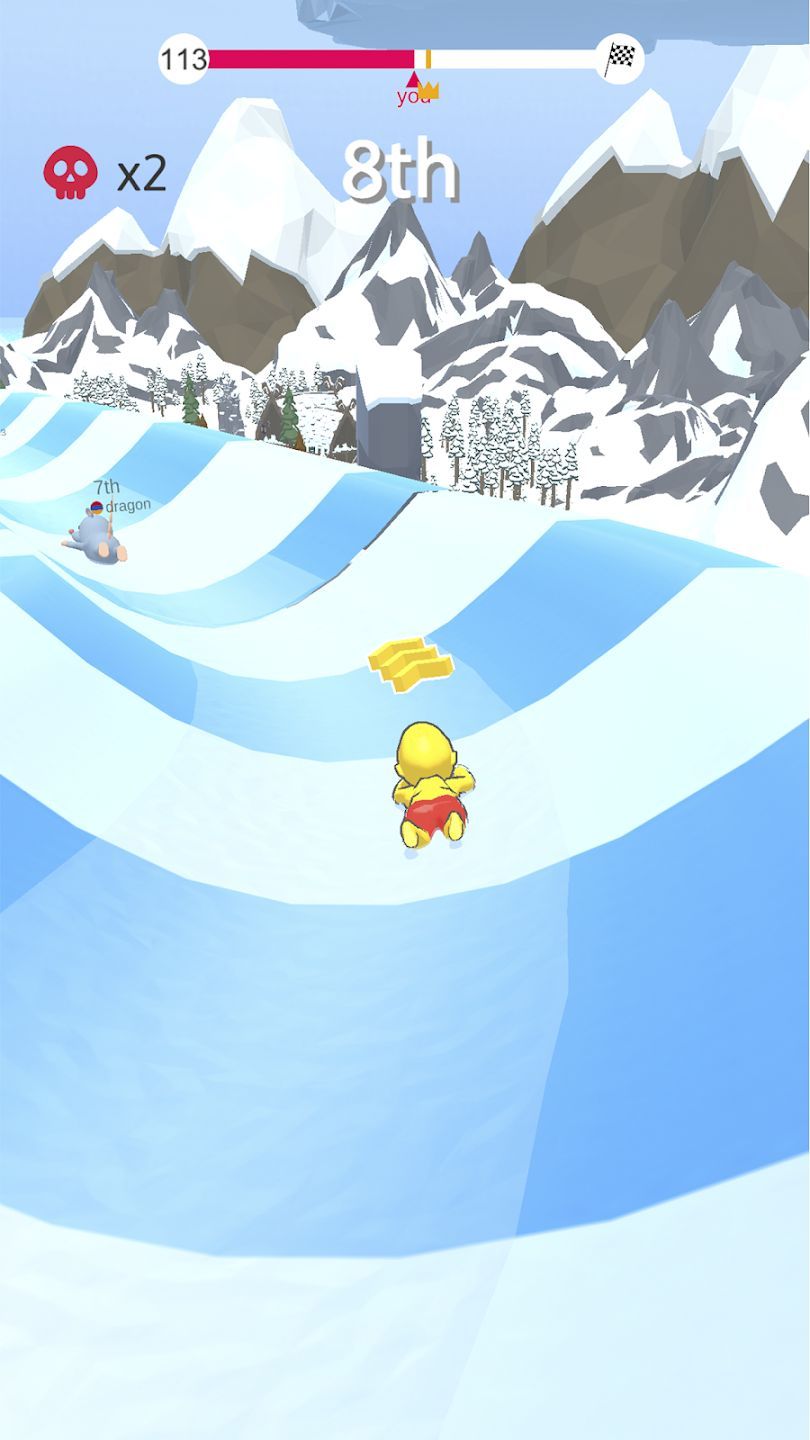 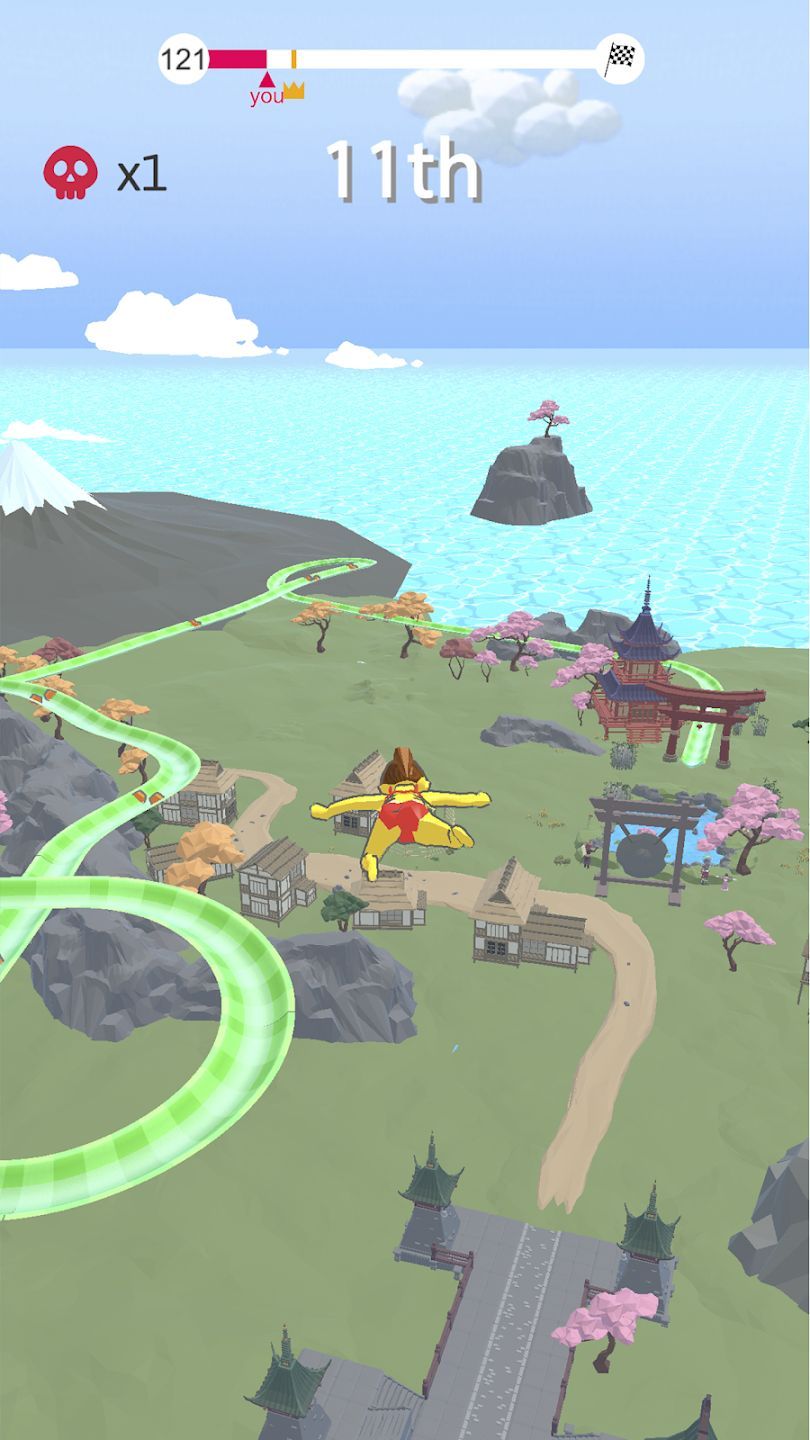 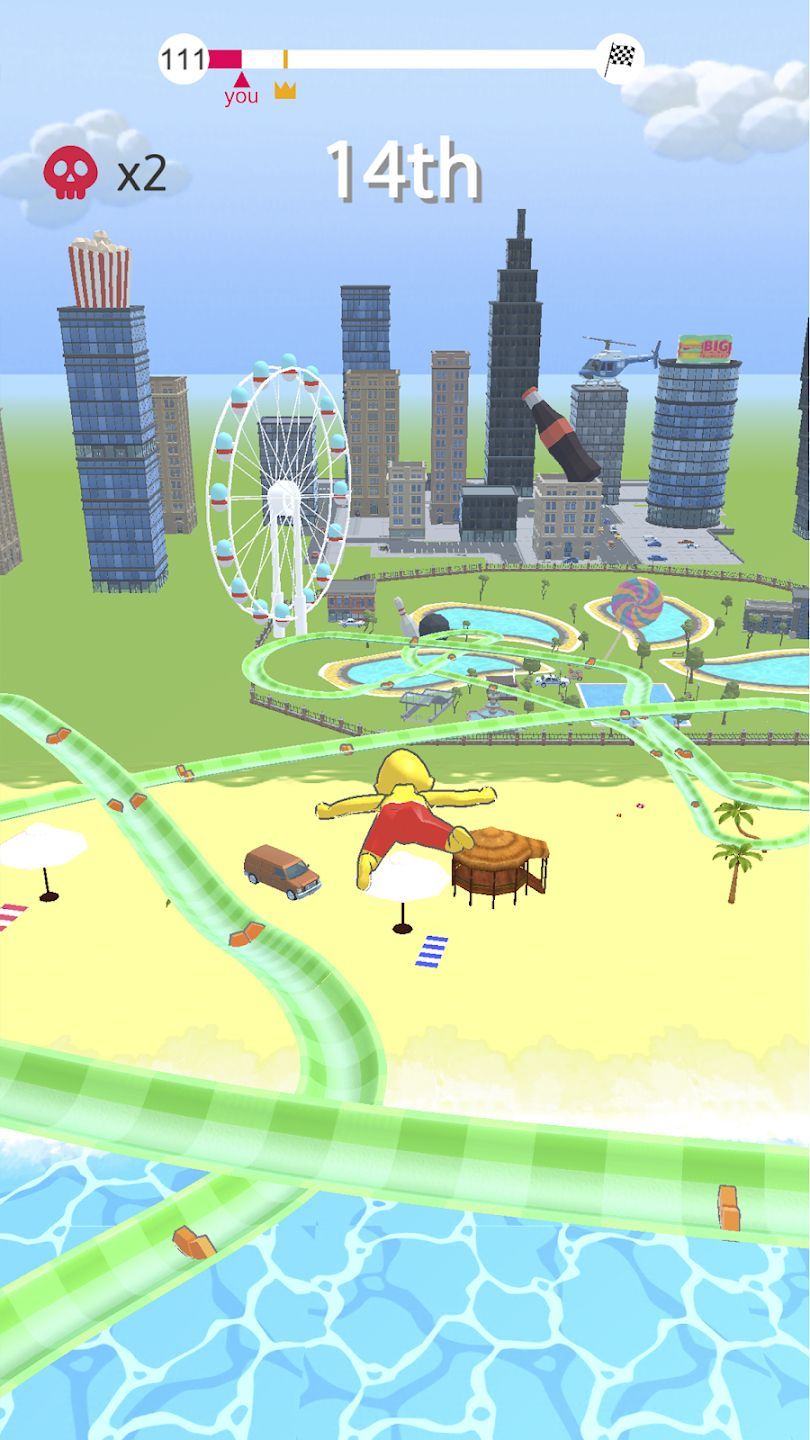 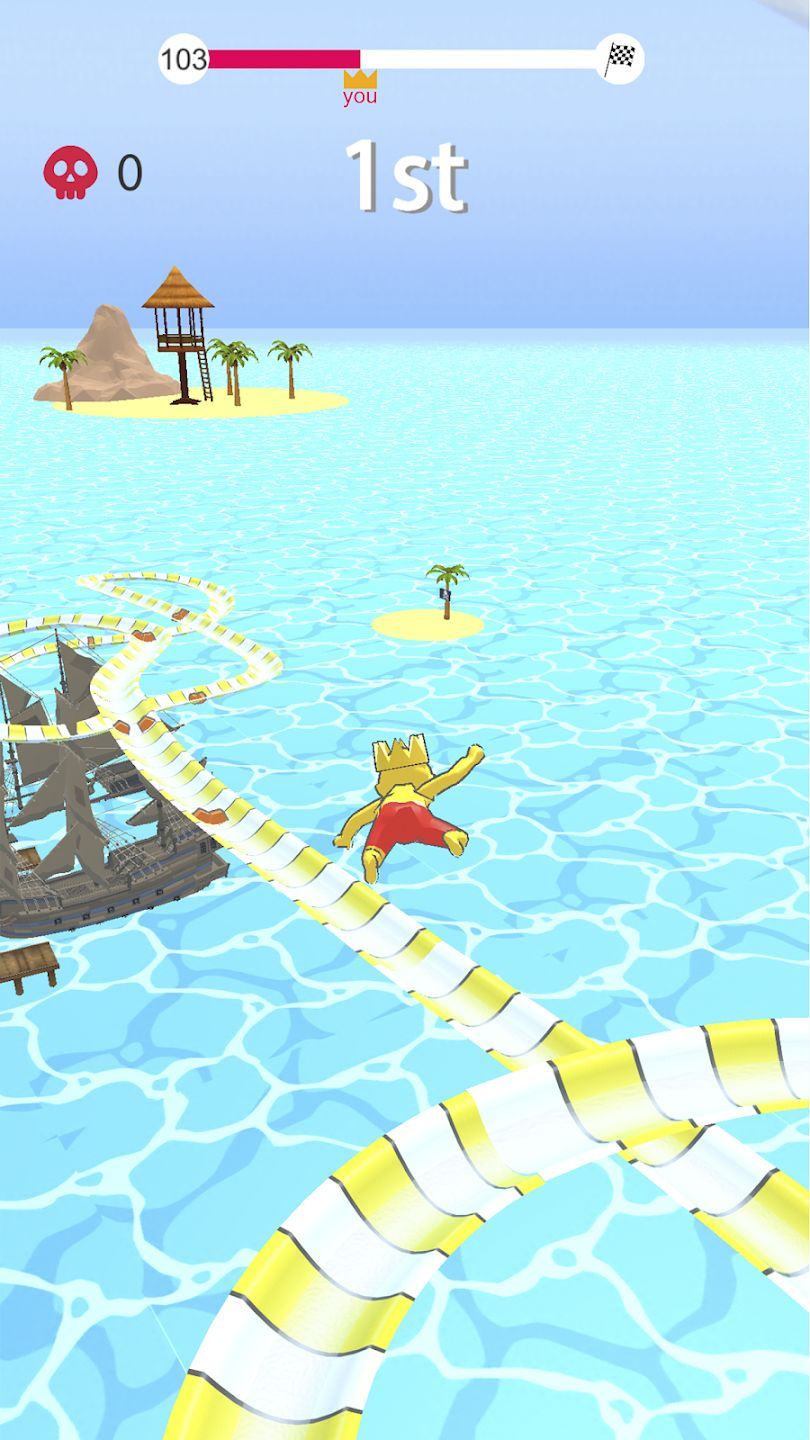 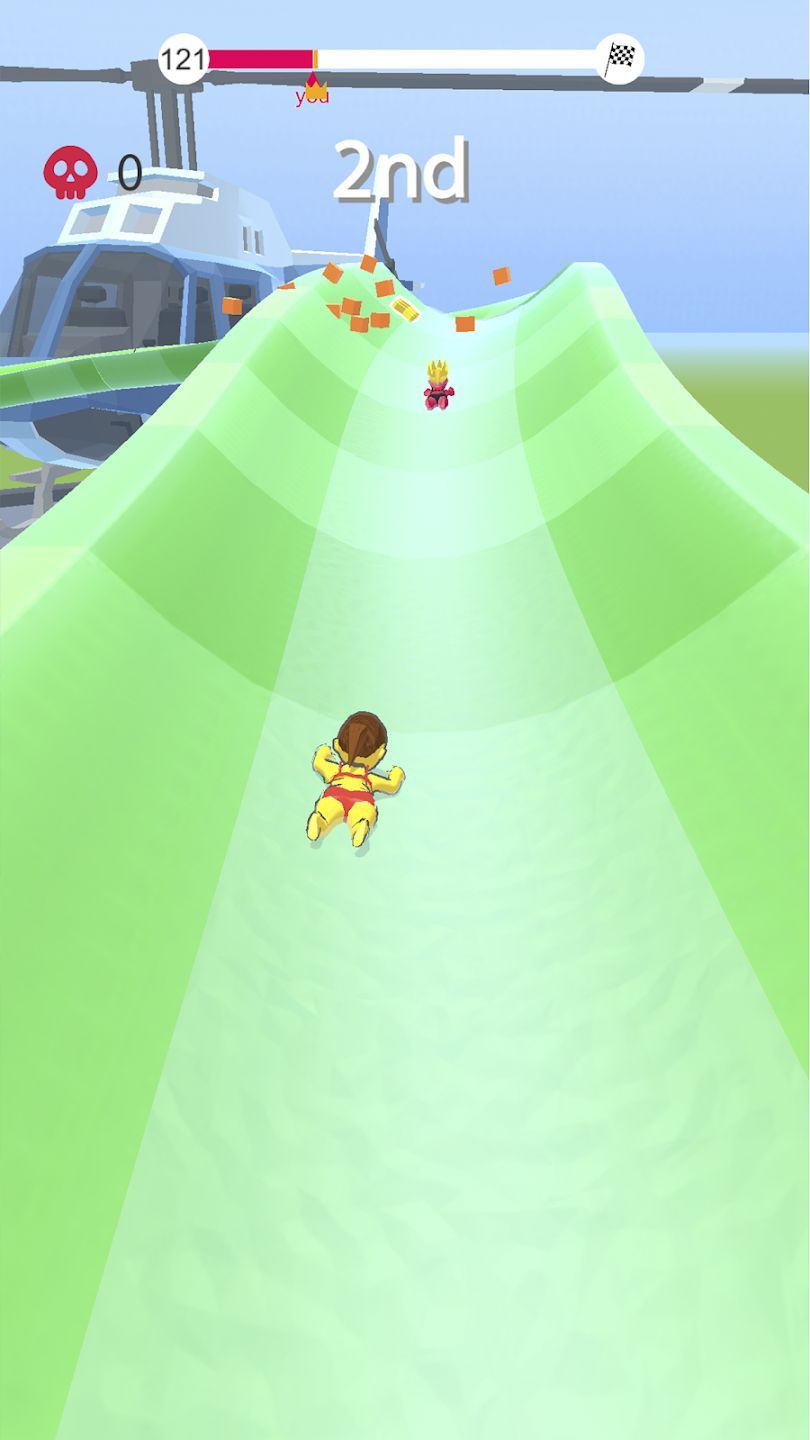 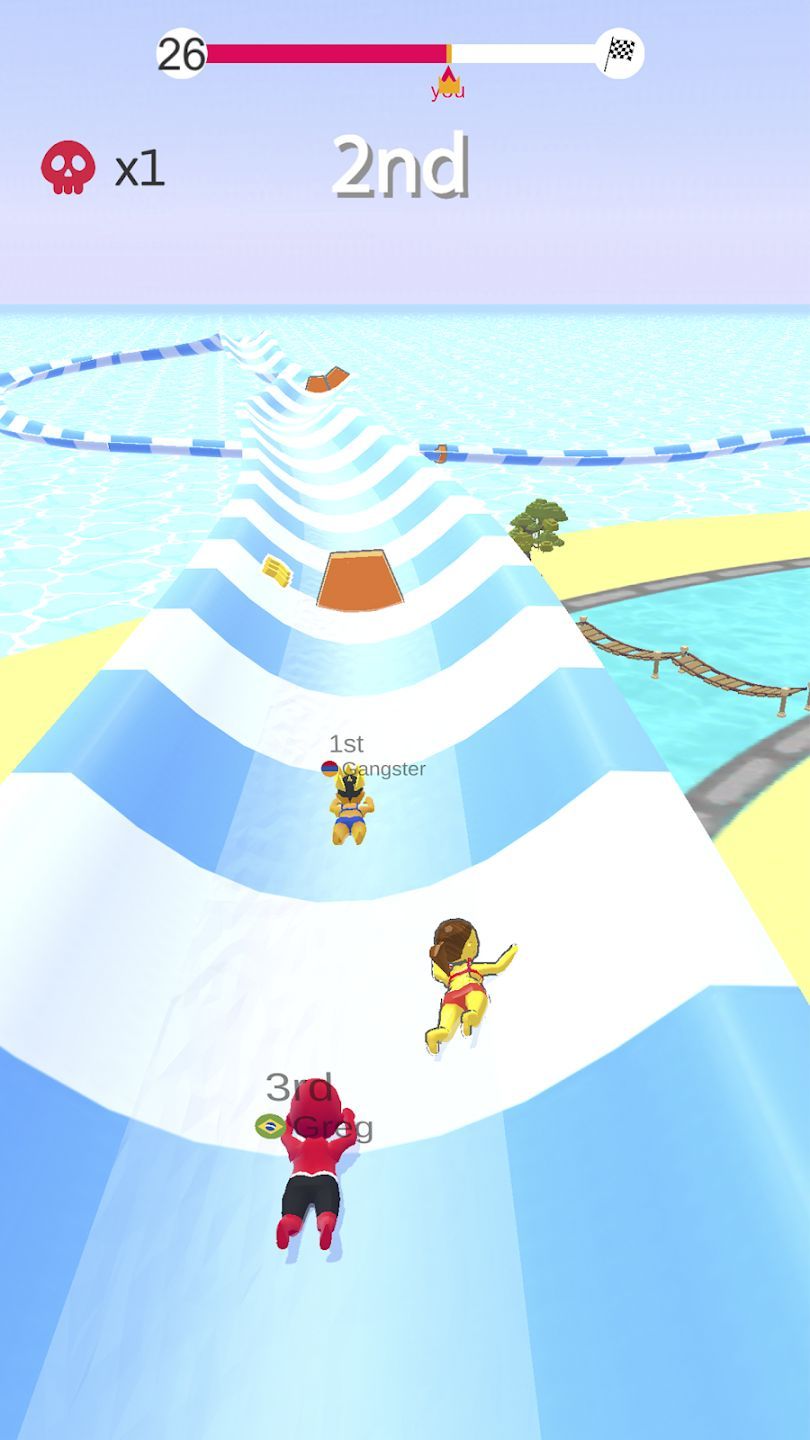 Aquapark.io is a free casual game on webpage, iOS and Android, released in 2019 by Voodoo.  This fast-paced light game is packed with all the excitement, thrill and joy one can possibly get in a speedy 5-10 min. gaming session. As its name suggests, this game is set on a gigantic aquapark and the core drive of the gameplay is all about racing up against your competitors and rushing to be the first one reaching the finish line. Therefore, this game is highly intensive in terms of speed and competition that makes you feel the rush of adrenaline! Players are playing with/against computer robots in this game where inviting someone to play with or paring with others automatically is not available for now.  The gaming proceeding is very straightforward as it is race-result based and players move forward round by round to their next water battlefield.

The gameplay of Aquapark.io is not complicated but it requires players to well control their motions throughout the race, which means they need to master the speed according to their current section of the tracks that can be quite complicated to predict. Thanks to the solid landscape design of the water park, players would encounter twists and turns here and there while they are rushing and gliding through the maze-like facility above the ground. In certain part of the tracks, they need to be careful and keep steady and avoid bumping into others or falling off to the water; sometimes, when they’re paralleling with rivalries, they would gain an even faster gliding speed to try to overtake others. And above all, the most exciting part is perhaps when you intentionally and strategically knock over your enemy to earn your bashing point. Of-course, it is not all about rushing around and smashing others, in order to win, you also need to develop your coping method and find a right timing to jump and short-cut your journey to the end. Players must be extra careful when they do those highly risky jumps and skydives because if you don’t get it just right, you could end up landing on the ground or taking a nosedive into the water instead of the aimed glide, which simply means game-over for you. Apart from the breathtaking racing part, this game is also full of features and cool designs, if you’re so skilled and confident that you can even take your time to appreciate those nice details while other players are experiencing a hectic running through. It should be mentioned that the settings and decos are well-made covering various scenic landscapes. Starting from a typical water game motif of a sunny beach, then it expands to other interesting scenarios, such as water temple, urban vibes and country aesthetics etc. Players can be rewarded while paying to explore those unfolding characters, themes and outfits. They can also use the coins earned in those high kills to purchase new colorful skins.

Therefore, it is a really fun and engaging game for people with short attention span. It’s blitz style gaming session incorporates delightful and exciting elements together. Even if you fail, you can quickly dive into a new round again without a burning-out feeling. Even though, it’s all about winning or losing, you can still find yourself surrounded by a beautiful and cheerful atmosphere thanks to the gorgeous graphic quality of the game. The gaming experience is truly short and sweet!

Indeed, there are other problems occasionally. As many other mobile games that take up a medium –sized space, Aquapark.io may crash with a frozen screen or loading problems. Besides, as this game is fully AI based, which means you don’t interact with real players but robots who may get in your way rather unexpectedly and knock you out of the game when you are so close to victory. That could be quite frustrating for some players, however, as I mentioned before that the gaming session is very short, which means you can always restart without much hassle at all. Therefore, I would just recommend that you take a light heart on this fun crazy water journey.

Aquapark.io is a very interesting action-adventure competitive game. The game is a very good casual video game. The graphics of the game are very simple and comfortable. The design of the slides is very reasonable. Simple graphics and relaxing music add a lot of appeal to this game. The background music is also very dynamic, and the overall style of the game is very cute. In this game, players can control the swipe direction by touching the screen with their fingers.

First of all, what makes this game particularly appealing is how interactive and social it is. In the game, players will have competitive entertainment on the slide. This slide has a large number of players, players can control the direction of the slide by tapping the screen so that we can compete with players from all over the world. In addition, there are many players on the slide, players can see their ranking through the competition, or invite their friends or family to play this game together. These current changing ranking settings will motivate players to slide faster and strive for better rankings. Therefore, players will constantly challenge themselves and keep sliding to achieve higher scores. Additionally, the game's on-screen interface will always display your location. In the game, you can always know your ranking and the distance you have slid, and you can adjust your strategy based on this information. The interface design of this game is very clear and simple, and the blue sea background complements the light-colored slides. The background music of the game is lovely and creates a very casual atmosphere.

In addition, the mechanics of this game are very simple and suitable for players of all ages. The main thing is that we control the screen with our hands to control the sliding direction of the game character. For example, we can make our character swipe left or right by touching the screen, or we can make our character fly in the sky, and then change to a new trajectory, no problem. In addition, there will be a progress bar above the game screen, showing our sliding distance and our ranking at any time. This progress bar changes in real-time, and it reminds us which level we are currently at, which further motivates the player to glide faster and get to the finish line earlier. When players reach the end, they will fall into a pool and our ranking will appear at the top of the screen. At the same time, the number of gold coins we got in this round will also be displayed on the screen. So, this game looks relatively simple, but players still need a lot of skills to win. Since the rail isn't straight, it's very complex in shape and shape, and it's sometimes hard to tell which rail is better. Therefore, players need to master certain skills and fly in exchange for better tracks to get better rankings. During the gliding process, we also pay special attention to try not to collide with other opponents, which will slow us down. But if the player's operation is particularly good, he can also deliberately hit the opponent and let him fall off the track, so that there is one less opponent. Also, in higher-level levels, we will encounter some obstacles on the track, such as some chests. We must take care to avoid these boxes. If we hit these boxes, our swipe will slow down and it's not good for us to get good rankings.

Overall, if you like competitive 3D mobile games and don't mind the occasional advert, then this game is for you.