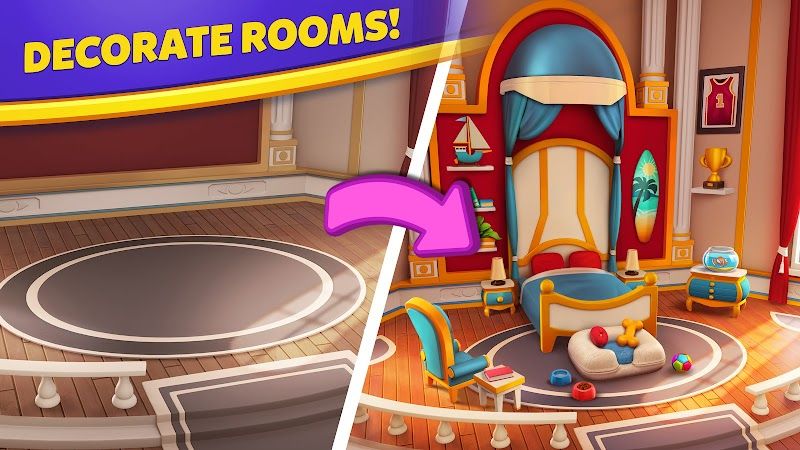 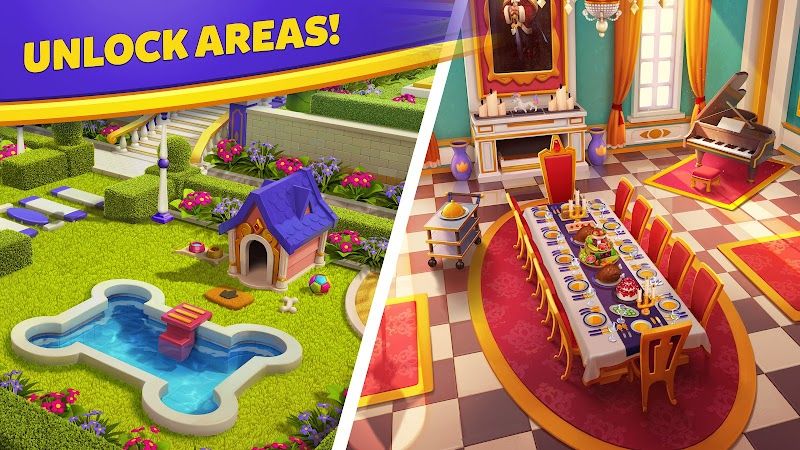 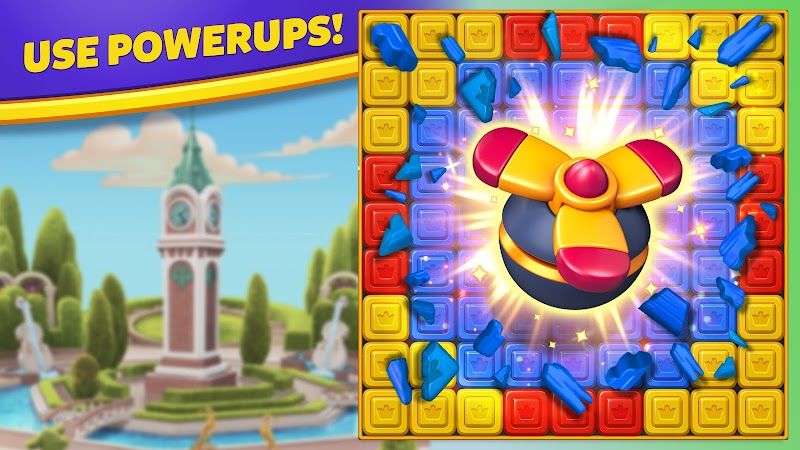 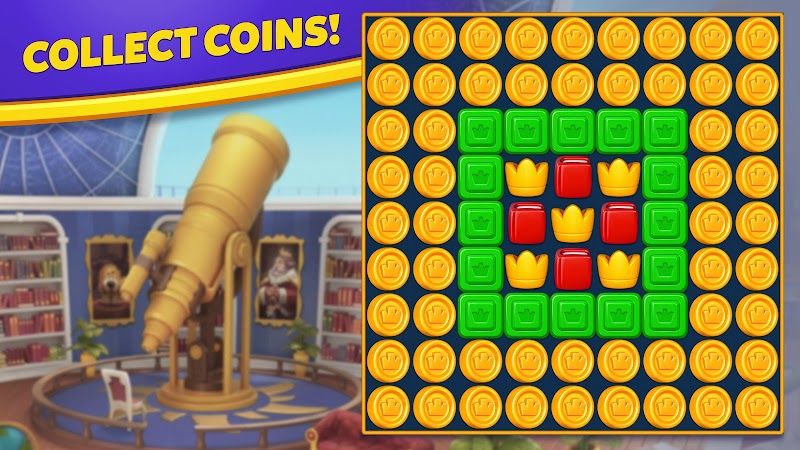 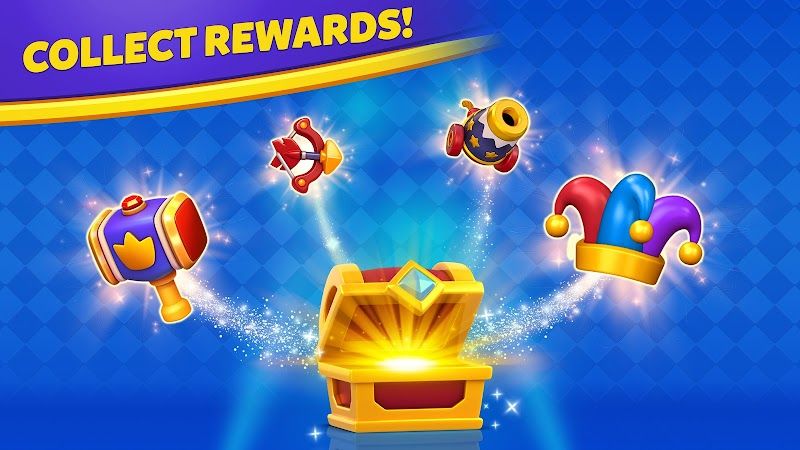 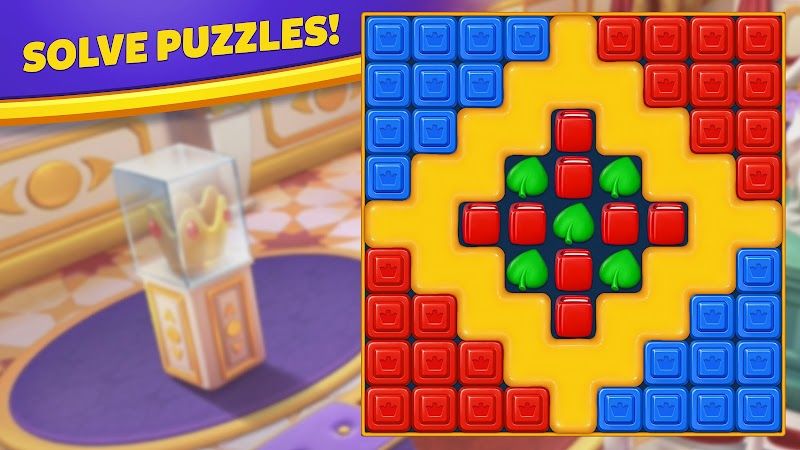 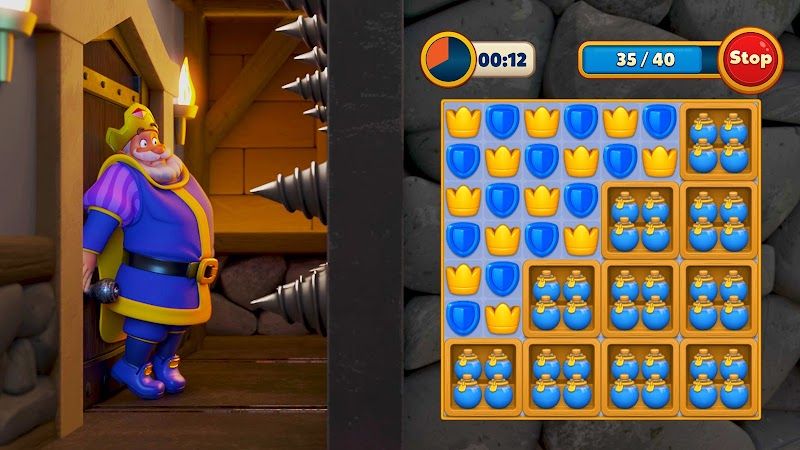 Turkish casual game company Dream Games announced that its first mobile game, named Royal Match, was launched. The founding members of Royal Match came from Peak Games and participated in the development of Toon Blast. Royal Match is very similar to many of Playrix's matching products. Players get action points (stars) through matching, which are used to decorate the castle. When the task of a castle is completed, they can start to decorate the next castle. There are only 2 lines of match-3 and decoration. So how does this matching game conquer players?

Everyone knows that the jump between levels in the current match-3 game is not smooth enough, but the game Royal Match has done a special job in this. Some games make users wait a long time between levels. But "Royal Match" shortens the animation time for players to enter the next level and wait for the reward items to drop, which is a good experience for players. When the player fails and needs to restart the next level, Royal Match allows the player to open the next level with one click without any jumping action. Royal Match starts from the details to make the player experience better. In the process of playing match-3 games, players often encounter a dead game and cannot perform elimination actions. And these micro-innovations are aimed at the two points of players - pain points and hi points. Royal Match selects bright colors and adjusts the shape and size, which is better for players to distinguish and does not bring visual fatigue to users.

Another obvious feature of Royal Match is that game props are distributed to players at a high frequency, and these props are powerful, which greatly reduces the difficulty of players breaking through the level. The scope of props issued to players by "Royal Match" is larger than that of other match-3 games. Elimination of the game, to a large extent, should give players a "cool" feeling. The elimination effect itself is irritating. Following this line of thought, "Royal Match" enhances this feeling, such as more powerful props, special gold coin reward levels, and a sense of surprise.

As for elimination of elements of the same color, the green water bottle will be eliminated. The dishes in the cupboard need to be eliminated by the player multiple times around before they can be eliminated. The letterbox element also has its own rules, such as the player needs to collect the envelopes in the letterbox by eliminating around the letterbox. In addition, many surprises are waiting for players. If enough envelopes are collected, the opening of the mailbox will close, reminding the player that the task of collecting envelopes has been completed, and there is no need to eliminate around the mailbox to complete the task. This design is very hidden, and players who notice this can easily reap the aha moment (surprise moment).

However, from my point of view, the reward mechanism of Royal Match is not very good, that is, players will get item rewards after continuously clearing levels. And with the accumulation of consecutive levels, the richness of item rewards will also accumulate. If the player fails in a certain round and chooses to restart the game, he will lose the props reward for continuous clearance. If a player fails in a certain round, instead of buying gold coins to get the number of steps, he directly chooses to restart the round, not only the previous elimination efforts will be wasted, but the prop rewards will also disappear, which makes it more difficult to pass the next level. In addition, this game gives players a lot of goals, but it requires very few actions to complete, which I think is unreasonable. This difficulty is the same as getting home to pump cash to use more power-ups to advance to the next level, it either requires you to gain life or you have to spend a lot of time waiting until it fully recovers because there are also too many supers between each normal level difficulties to overcome.

On the whole, some small innovations in this game make the game very playable, but these make players spend more time and money to complete them better. They should essentially increase the krypton gold rate. Players who like elimination games must give it a try.

Royal Match is a match-3 puzzle game featuring a king and his subordinates. As a player, you need to help the king to decorate his castle by moving and matching blocks in the same color in a row. There are thousands of levels available for you to challenge. Whenever you achieve a combo, you will be rewarded with coins to unlock new regions, elements for furnishing the castle of King Robert. Moreover, you also have the chance to acquire boosters to carry on the game. As an online game, players can compete with millions of players worldwide in all kinds of events to win ample rewards. The game is free of ads and can be played without an internet connection. It now has 734,846 reviews with 4.6 stars out of 5 on Google Play. The game contains in-game purchases. Next, the advantages and disadvantages of the game will be reviewed.

As for the advantages of the game, first of all, Royal Match is a great and fun match-3 game featuring thousands of challenging levels meeting the needs of players at different levels from green hands to masters of the game. Therefore, players don’t need to worry that the game might be way too difficult for you to challenge. Also, even though sometimes you might be stuck in the game, you can get help from the rewarded boosters to continue your journey. Numerous chances of winning coins and treasures are available. There are also fun barriers that you need to pay attention to like boxes, diamonds, potions, etc. Moreover, when you are decorating the castle for the king, you can explore every feature of the building, like the gardens, rooms, chambers, etc. Furthermore, players won’t be bothered by in-game pop-ups now and then, ensuring them a smooth gameplay experience. Finally, players can share this game with their Facebook friends and compete with them so as to become the number one on the list of the game ranking.

However, the game is still criticized by some of the players due to the following reasons. To begin with, the paid features of the game are quite costly. Furthermore, the updates of the game offer players an inconsecutive gameplay experience. For example, the updates of the game make some of the players lose the chance to get the King's Nightmare while half of the team members have got one. Moreover, the levels of the game are way too difficult for players to overcome. The game makes it impossible for players to win once they reach certain levels unless you pay for the game to buy power-ups and gears. Finally, the portrayal of the game in its promotional ads is somewhat deceiving because the real game doesn’t contain plots of saving the king from dangers.

In sum, Royal Match is a challenging and fun game providing players with a smooth gameplay experience with a variety of choices. It is not only a match-3 game but also a decoration game. Players can expect surprise and great every time they unlock certain features of the game, and they can have interesting interactions with other players online. Yet, it doesn’t mean it is a perfect game. Royal Match is blamed for being too profit-driven, setting levels almost impossible for players to pass unless they pay for it. Parents should be aware of the existence of in-game purchases in the game and warn their children of the possible outcomes of the game. Overall, the game is recommended to those who are free and have some money to spend on the game.