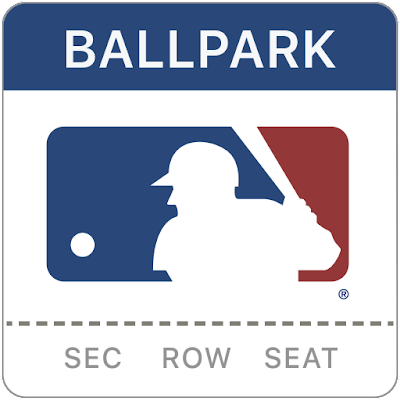 The Description of MLB Ballpark

MLB Ballpark is a mobile tool for Major League baseball game audience to personalize and manage their ballpark visits. It is provided by MLB Advanced Media, L.P and can be obtained from Google Play and App Store for free.  This sports app also contains certain amount of ads and it requires a registration of user account. The major service and functions this app provides include online ticketing, game schedule and practical information, online purchase and other promotional contents. To be more specific, the most important feature is about ticket. Users can check ticket availability on the app and book selected tickets on the go. It allows users to view and select their ballpark and seats. After a successful purchase, players can view their digital tickets on the app with barcodes, which enables them to enter and check-in the ballpark without printing out tickets on paper. Users can also link their online tickets to apple wallet and forward tickets to or cancel forwarded ticket from other people. They can also receive online tickets from other users of the app. Then, users can also acquire various useful information on the app, such as the baseball game schedules, ballpark address, opening hours and parking instructions etc. Besides, the app also allows audience to browse dining options on the interactive map and order food online directly via the app. MLB merchandises can also be purchased there. Furthermore, users can personalize their game watching and team preferences. The app creates shortcuts for future online ticketing and orders according to users’ customizations. What’s more, users can use the app to take notes, pictures and record great moments during each of their ballpark visits. Previous tickets and game watching history are also stored on the app for users to track. Last but not least, the app itself offers exclusive perks to users from their favorite teams and it can be connected to Clubhouse with rewards.

MLB Ballpark generally receives a positive rating on various app platforms. On Google Play, there are over 1,000,000 people downloading the app and about 265,000 users rate it at 4.6 out of 5 stars. App Store sees the same rating with 111,000 users votes. Justuseapp also sees over one million downloads of MLB Ballpark with 4.6 out of 5 rating.

1. The functionalities on this app serve its basic aims.

2. It offers an extensive amount of information.

1. The programming of the app is flawed with multiple glitches and malfunctions. Frequent crashes also occur from time to time.

2. Some key features are unstable such as the accurate display of purchased tickets.

3. Recent app updates removed some of the nicest features in its older version, such as the park visit history.

This mobile app serves sufficiently as an official tool to assist MLB ballpark visitors before and after the events. Its functions and service facilitate a digitalized, on-the-go planning for ballpark visits and it ideally saves time and effort to manage schedules and paperwork. Although occasionally this app might be unstable in terms of its programming, as a basic service provider, it generally delivers a reliably consistent performance, particularly for some of the most fundamental features. Beyond that, it also offers extra benefits as a bonus to enhance the user experience, such as the exclusive team rewards.  Other than that, the latest updates made a major change and users’ previous park visits and the notes/pictures they took are removed from the app. This feature is considered by some people as their favorite app experience while others prefer the streamlined new version. Nonetheless, their feedback has reached the developing team who might further optimize this feature in their future updates.

The Description of MLB Ballpark

MLB Ballpark is a useful app for baseball fans and lovers. It is a good companion for you and it will keep you updated on the information on tickets, rewards, and original content. Moreover, it can help you to customize your baseball trip with a variety of strong functions, like check-in, ticket purchases, etc. By using MLB ballparks, you can also order food and buy other goods. You can totally rest assured when visiting the baseball parks. The app will provide you with the team schedules, sales, and events. When you get lost during your search for any facilities like shops in the ballpark, MLB Ballpark will also guide you to your destination by offering you references with its interactive maps so that you can get food, drinks, and so on. The developers of the app understand that baseball fans would always love to keep a special memory of every event that they participate in, so the app features a practical function of score recording and photo saving. When you just install the app, you can simply personify the app by designating your favorite teams so the app could keep you informed of these teams in your future use. Furthermore, fans can socialize and interact with others who are supporters of the same team via this app as well because it is equipped with a social media feature. Fans can join fan clubs and communicate with each other. The app can also inform you of the places to park your cars and maps. Finally, the app contains ads.

MLB Ballpark has so far received 23,054 reviews on Google play with an average rating of 4.5 stars out of 5. On Appgrooves, it has more than 138k reviews together with an average rating of 4.6 stars out of 5 by over 138.4k users as well as over 1 million times downloads. On App Store, it is rated by 113k users with a score of 4.6 stars out of 5. According to the data offered above, it can be deduced that MLB Ballpark has a comparatively good performance in app stores and it is well-accepted by users worldwide.

1. With MLB Ballpark, users can keep themselves updated on the events and schedules of their favorite baseball teams.

2. It can guide users to find facilities in the ballparks.

3. Users can check ticket information and buy tickets on this app.

5. There are fan clubs available for users to join in order to exchange information about the teams.

6. Every event you visit will be recorded with scores and photos.

1. Some of the tickets won’t be shown on this app.

2. The interface of the app is not user-friendly.

3. The recent updates removed some really useful features, like the data record of past events users once attended.

On the one hand, MLB Ballpark is extremely helpful to baseball fans since it provides users with a one-stop solution for watching baseball events, varying from checking schedules, buying tickets, checking in, to finding facilities on the spot. On the other hand, it does raise some issues for users like its inconvenient operational interface as well as the lack of tickets for certain baseball events. Regardless of the drawbacks of this app, the app is recommended to zealous baseball lovers because it can ensure that users can keep informed of the most recent activities of their favorite baseball teams. Since the app contains ads, users should also take this into consideration when they install this app.