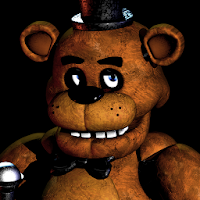 Five Nights at Freddy’s (FNaF) is a horror and survival video game. Against the setting of a Pizza restaurant called Freddy Fazbear’s Pizza, you will play the role of a night shift guard in the restaurant. You are responsible for safeguarding the place at night during which time strange things might happen. The characters of Freddy Fazbear and his two friends, who are animatronic robots developed to entertain customers in the daytime, will act weirdly at night, making unpredictable movements. Your job is to keep an eye on those horrible dolls via the monitor in your office while keeping yourself safe. If you are caught by those dolls, the game will be over. Be aware of the limited amount of power per night so you will not lose the protection of the security doors and lights. It will be an exciting and interesting game to play if you have the audacity. However, if you are easy to get scared, you might need to think it through before having a try.

As a game enjoying worldwide popularity, FNaF has the following strengths. To begin with, the gameplay is simple and easy to control even for new players. Yet, despite the simplicity of the game, it is still pretty terrifying because of its excellently designed graphics, character images, and interface. The fear of people towards images of creepy dolls has been deeply embedded in people’s genes, which trait has been taken good advantage of by the developers of the game. What’s more, the responsive background sound played at the right timing also creates a horrible atmosphere, providing players with an immersive gameplay experience. The first-person view from the camera of the monitor is also very engaging. Lastly, in this game, players can expect an unexpected thrill at any time, which is rather exciting and challenging.

However, regardless of its pros, the game still has insufficiencies as well. Compared with the PC version, this version of FNaF has few changes, leaving fans with a little surprise. Moreover, during the game, players should always be cautious of the limited power, which makes the game hard to play. Furthermore, there is always a delay when shifting camera perspectives from one to another. Also, the background sound is not satisfying. Sometimes, the background music and other sounds could not be heard during the gameplay. Lastly, it is regarded as an overrated game charging higher fees than it actually deserves, especially the money players need to spend to unlock elements in the game.

Anyway, it is a good game worth playing. FNaF’s story background is innovative and rather attractive. The first-person view and the creepy doll lore give players an authentic sense of involvement in the game. Adding to the excellent features of graphics, images of characters, and interface, as well as the interactive sounds, players can experience an extremely terrifying atmosphere throughout the gameplay. The game is easy to operate even for new players. However, we should also consider its shortcomings. As a scary game, it might cause an unpleasant experience for children, so parents should pay attention to the response of their children, and decide whether to let them continue to play depending on their reactions to the game. Apart from the horrible attribute of the game, the profit-driven nature also causes problems for those who lack self-control. Lastly, there is some feedback from players that the sound of the game doesn’t function normally now and then, which requires developers’ effort to fix. In a nutshell, Five Night at Freddy’s is an excellent game for those brave people with proper self-control, so it is recommended if you are one of this kind of people.

Five Nights at Freddy's is a very addictive game. This game is mainly a horror game and is very popular in Europe and the United States.

The protagonist in the game works as a day shift security guard in a bizarre pizzeria for a high salary. In order to attract children, this pizza shop brought a lot of little teddy bears. The cute little toys on the surface will be confused at night, which makes the quiet and boring day shift full of a "happy and interesting" atmosphere. What the player needs to do is to avoid the little teddy bear rushing to the monitoring room to find you "happy play", and to spend five nights "happy and easy". This restaurant is called Freddy's Happy World, and there are several robot dolls in it, one of them is called Bonnie who can sing (that is, the doll whose mouth opens and closes, and then there is a speaker to play with music. There is a little girl in Bitten while taking a photo with it! The little girl has bitten off her frontal lobe but is still alive, this happened in 1987, it is said to be a real event. Actually, this game is terrible. Many gamers are the game Honest supporters, they will play every time the Five Nights at Freddy's or a fan game comes out, but very few people can pass the level. Esc indicated five-star praise and then saw that the bold and humorous anchor played the game.

The content and background of the game are very rich. Freddy Fazbear's Pizza, a well-respected and welcoming pizzeria, is on the verge of bankruptcy as a result of a serial kidnapping of 5 children, murders and doll bites, and new security guard Mike Schmidt, for 120 The dollar commute is guided by secret men in the surveillance room, guarding every hallway, restaurant, and guarding the store's four mascots: Freddy the Bear, Chica Chicken, Bonnie the Rabbit, and the rabid pirate Fox and confronted them for at least five nights. If caught by them, Mike will be killed and stuffed into the beer holster. Later on the seventh night, Mike was killed for fixing the order of the teddy bears.

In addition, the plot of the game is very coherent and reasonable. For example, the safe room appears many times in the game. As a relatively important place in the game, it plays a very important role. The safe room originally appeared because of the snap lock. When the employee was pierced by the mechanical frame and other parts due to the failure of the snap lock, to avoid damaging the customer's play experience, the killed employee needed to return to the safe room for processing. The security room is kept secret from anyone other than employees, and visitors cannot enter except employees, and neither can mechanical dolls. At the same time, the safe room is also unmonitored, so it is suitable for doing something shady (such as killing children).

However, this game is very scary, and the game is full of unknown and helpless feelings. First of all, the sense of helplessness comes from the power that the player can only rely on, and the power is consumed all the time. You can only watch the power loss without being able to defend the toy, which causes terror. Secondly, the sense of the unknown is because the dolls under monitoring are static, you don’t know when they will move and where they will move, everything is unknown, so the fear of sudden shock will also appear. Coupled with the terrifying sound effects and graphics in the game, it is really scary.

In conclusion, this game is very bloody and exciting, very attractive. The compact plot, thrilling music, and bloody pictures in the game bring different feelings to players. The daring players may wish to give this game a try. If you are really scared, you can also play with your friends.

i love your games

They're scary and fun and i love your games