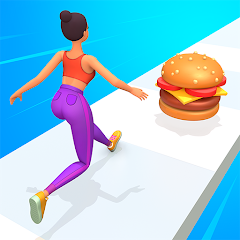 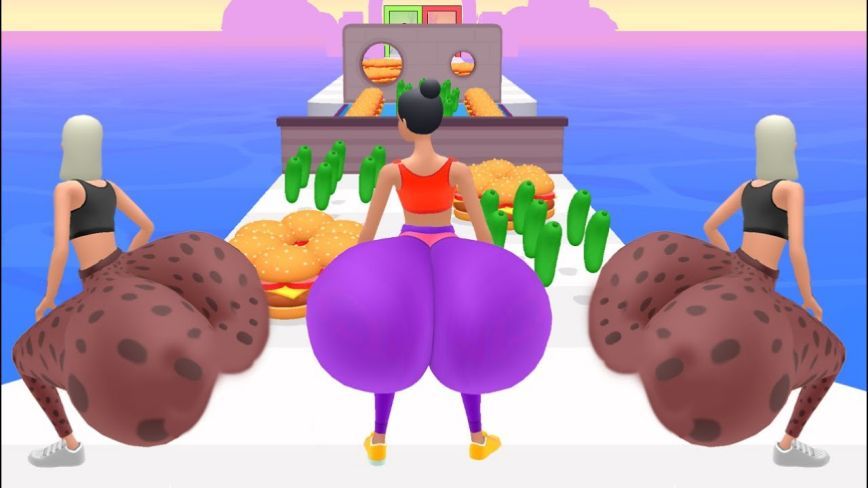 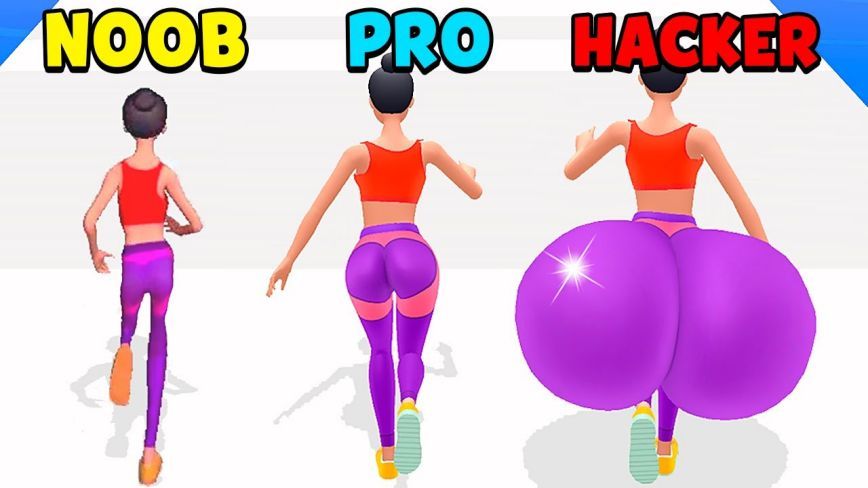 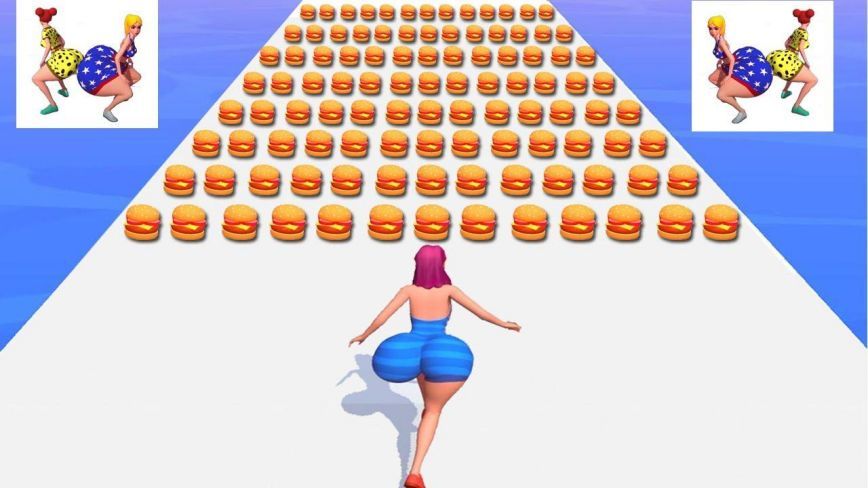 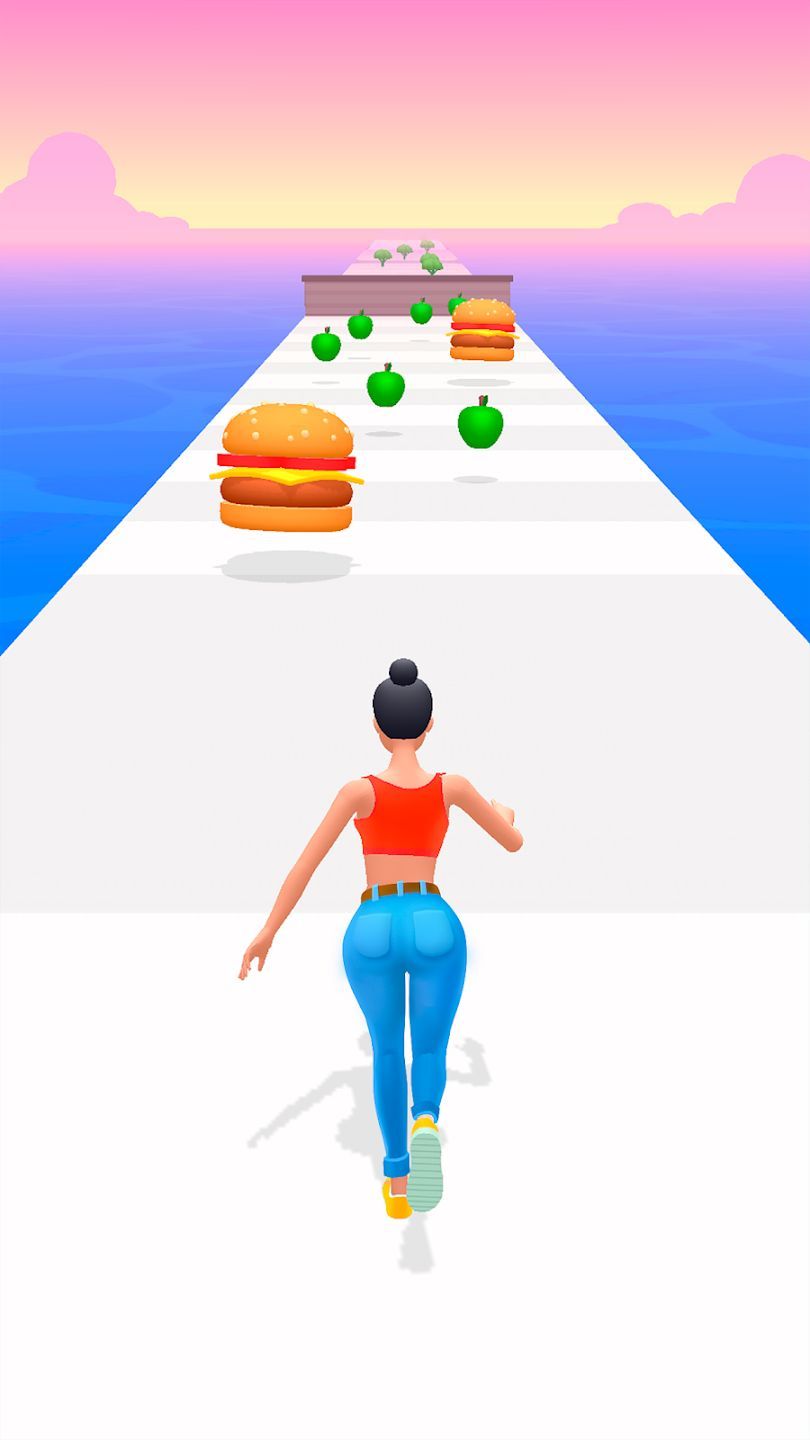 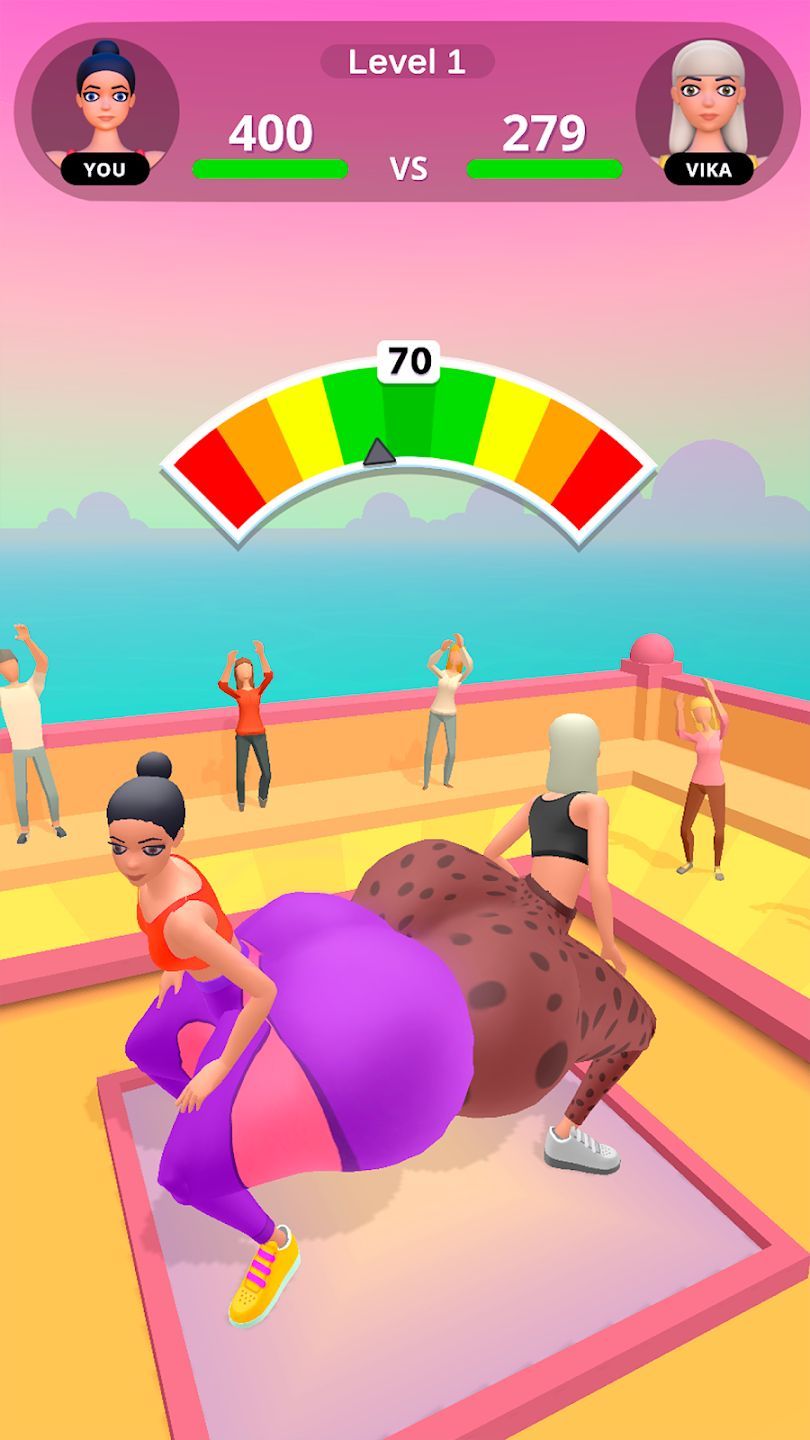 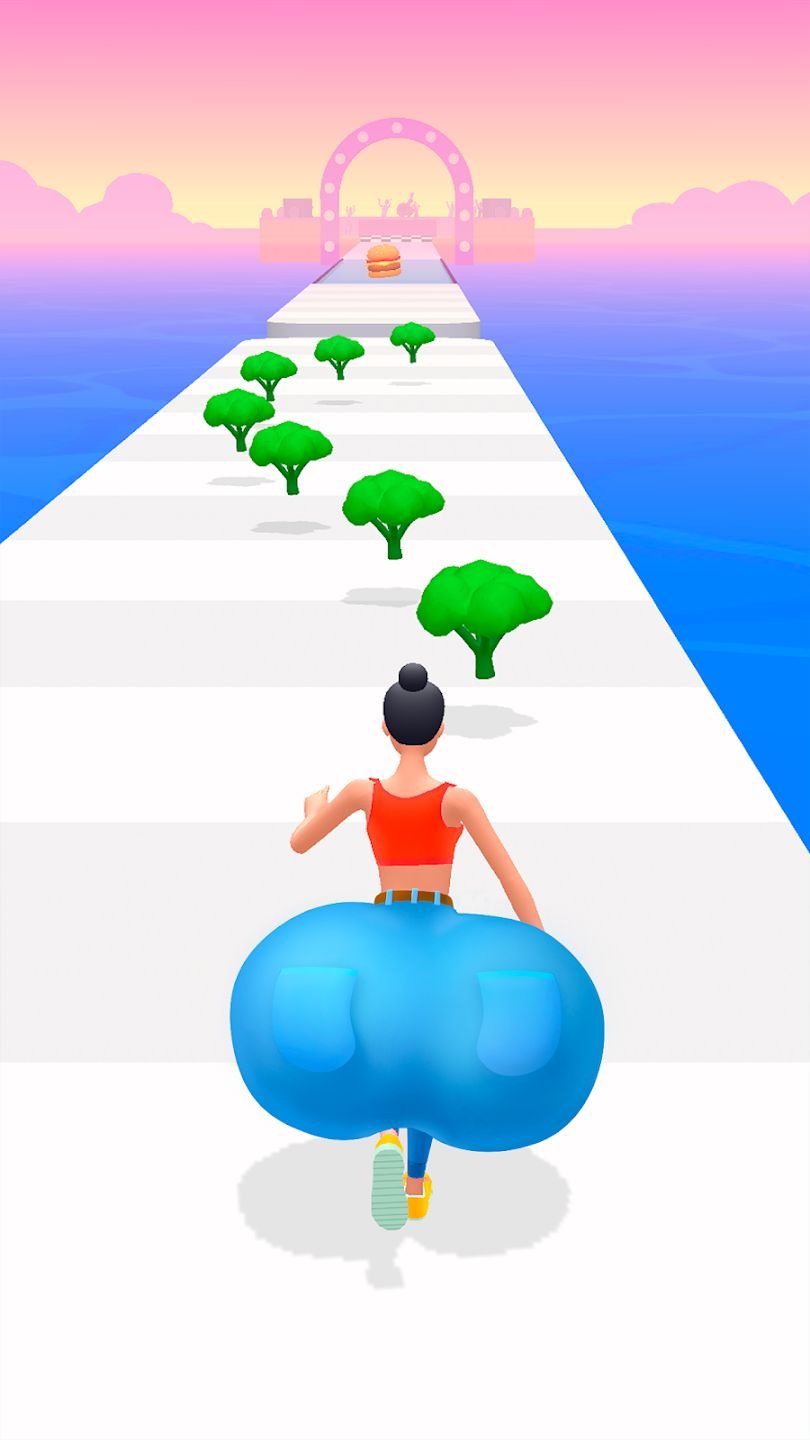 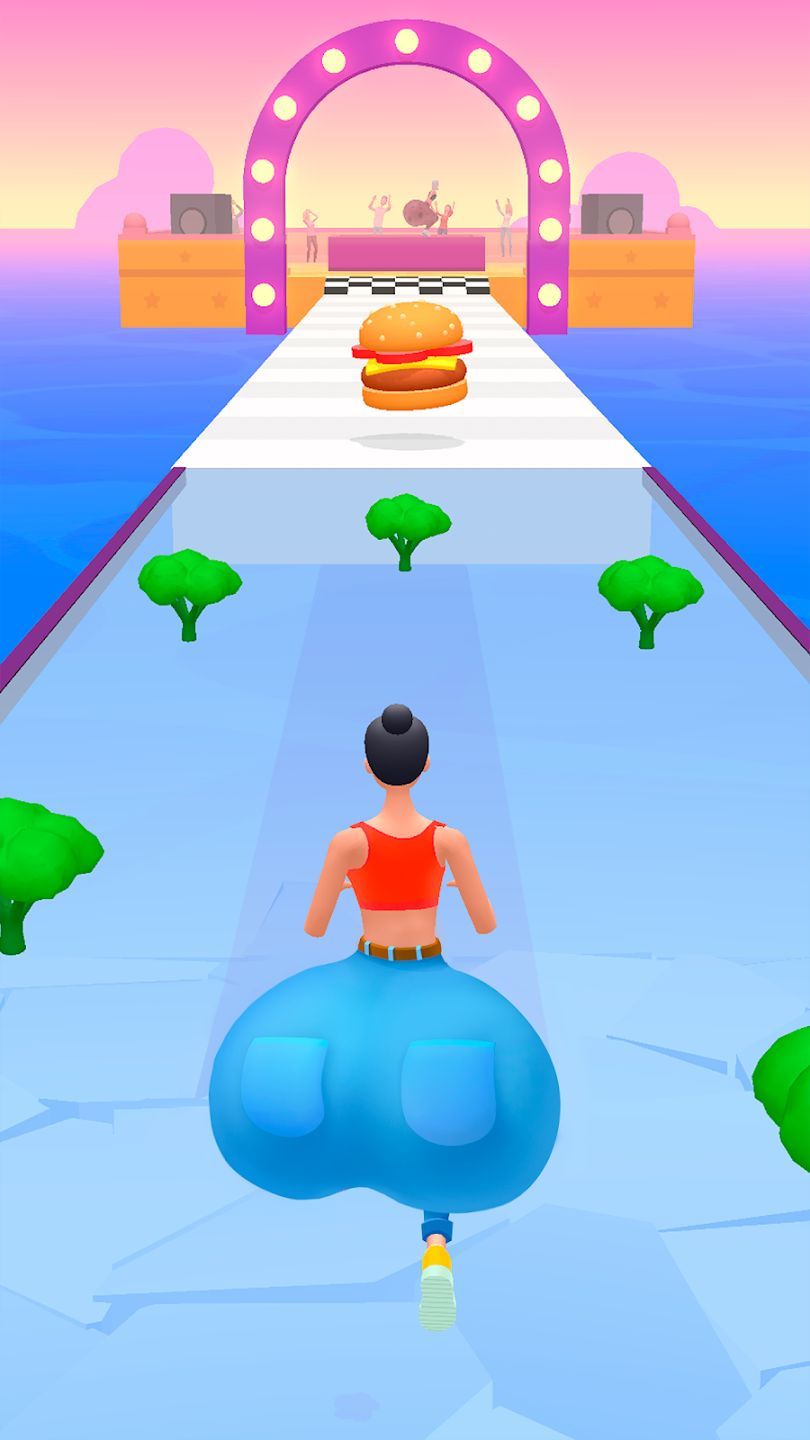 "Twerk Race 3D - Running Game" is a famous parkour game. This game is launched by Freeplay Inc. The game is said to simulate the gameplay of "Airport Security" and the action game "Stickman vs Craftsmen". But Twerk Race 3D is a fun free action parkour mobile game with twerking in the background. In the game, players increase hip fat by ingesting high-calorie burgers, accumulating all their strength in electric hip competitions, and popping opponents out of the competitive arena.

First of all, I think the biggest game highlight of this game is that "Twerk Race 3D" has integrated twerking and parkour gameplay. In the game, players improve their hip strength in the level and build their bodies with the goal of the ultimate twerk dance battle at the bottom of the level. Players can also use the hamburgers, vegetables, and other ingredients in the level to control their figure and make various preparations for victory. This seems very close to real-life because losing weight has always been something that many people talk about. In this game, you can provide diet and parkour to exercise your body, making you sexier and stronger.

Secondly, the gameplay of this game is also very interesting and novel. "Twerk Race 3D" incorporates strategic elements based on parkour. In the game, you need to avoid green vegetables and collect high-calorie burgers to increase your hip weight. Because players also need to constantly pass through the fragile glass platform, players also need to pay attention to weight control. Some strategic choices are also required. For example, players need to select the corresponding holes according to their body size and pass through the wall obstacles.

In addition, the graphics in this game are excellent. The graphics of Twerk Race 3D tend to be cartoonish and exaggerated. The simple European and American 3D cartoon style, with the extremely exaggerated giant hip shape, brings users a surprising visual sense. In the game at the end of the game, the huge giant hip will also be the guarantee for you to win high scores and win the game. As a standard feature of current ultra-casual games, the skinning function cannot be missed, of course. Here are 9 different skin tones, characters that are issued and outfitter and so on. You can earn gold coins to exchange. From the reality experience, "Twerk Race 3D" is based on the standard parkour game and incorporates the twerk elements that are popular in Europe, America, South Korea, and other regions. With this element, it has attracted the attention of a large number of potential users. At the same time, it integrates the strategic content of the game, which enhances the entertainment and playability of the game. The battle function added at the end of some levels allows users to enjoy the fun of fighting against people in stand-alone games. Therefore, it is no wonder that many people like this game with such a sexy theme integrated into the popular parkour game.

However, the audience of this game is still relatively narrow, because this is a game for women, and boys should not like this kind of game. In addition, there will be a lot of advertisements in this game, so I personally don't like it very much, because the advertisements affect my game experience very much. I think ads are the biggest shortcoming of this game, and I hope the developers can reduce the ads a little bit so that I will like this game more.

In general, if you are a parkour game lover, if you have a soft spot for twerking, and if you like a fusion game with a little strategy attribute, then please don't miss this "Twerk Race 3D" easily.

Twerk Race 3D— Running Game, as its title suggests, is a mobile racing game with a peculiar “twerking” feature. It is offered by Freeplay Inc., available on Android and iOS platforms. This game is built on a running game mechanism while it also incorporates a bit of strategy and “dance battle” elements to it. In general, the gameplay is quite simple with easy-to-control movement. Unlike a conventional speed racing game, this game is won by building up your character’s body size throughout the run and nailing a final twerking dance battle with another player’s character. During the running, players will encounter various obstacles and other people on the way, which they need to watch out and avoid bumping into those obstacles; meanwhile, as the main goal of the game is to gain your body size, it is strategically important for players to pick up the right food item to serve this purpose. It is funny that the type of food has an immediate representation in body image(either fat or fit). As the characters run down with random food options (healthy low fat food/fast food with high calorie), although they need to grow bigger in the end to win the game, it doesn’t mean they shall always pick up cheeseburgers instead of veggies. This is because some obstacles might be challenging if the character is too heavy. Therefore, players must make food decisions according to the specific obstacle conditions. However, it should be kept in mind that when reaching the finish line, players want their characters to be as big as they could be for two good reasons: to earn a bigger coin bonuses and to gain an advantageous starting edge in the final dance battle. The final battle is a hilarious touch of the running game where the character exert her incredible butt power to knock and bounce the opponent off of the dancing stage and shake her off up in the air. The further the landing distance is, the more coins and rewards players can win. With those coins, players can upgrade two boosting features, both related to the “flying distance” of your rival in the dancing battle. Besides, players can watch in-game ads to get some of the free upgrades.

In terms of game design and feature, this game seems more than a running game with its extra elements and contents. Players have certain level of flexibility to make decisions while they’re running down the path; they can also personalize their character with various styles and appearances. Plus, the game rewards players new skins at the end of every five levels. However, this game is also problematic in its own way. Trying to add extra funny elements to a conventional casual game is nothing wrong, yet the blatantly womanized feature of this game does arouse disgust and disapproval from many players. The overplay on female body image may not be ill meaning in the first place, yet it is definitely an inappropriate and unthoughtful gesture. This issue can actually be easily fixed by adding a male character to the game, instead of playing on the sexist stereotypes and jokes.

Personally, I think this game can be improved in other ways too apart from the issue mentioned above. The gameplay itself could be more engaging if more upgrades options are performance-related. Currently, there are only two kick-related amplifiers available for upgrading, however, there are plenty of upgrading rooms during the running phase. Plus, it can accentuate even more on the decision-making mechanism for avoiding the obstacles. Those elements are clearly not fully developed and the potentials can still be better exerted.