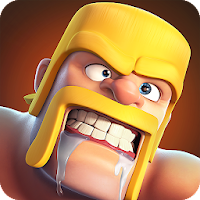 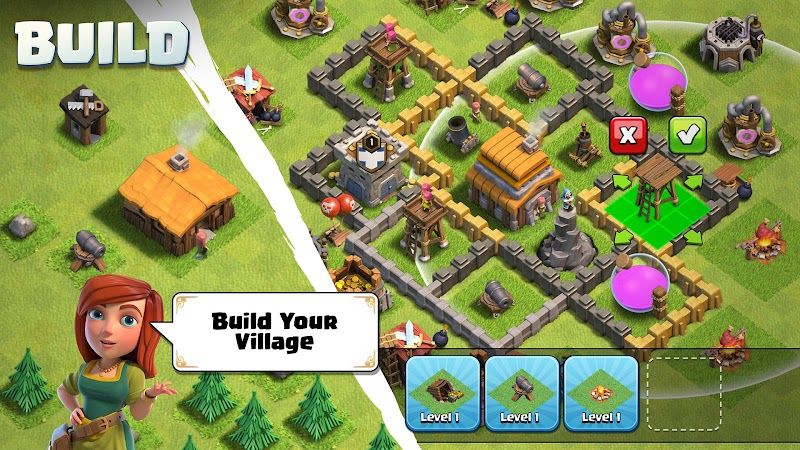 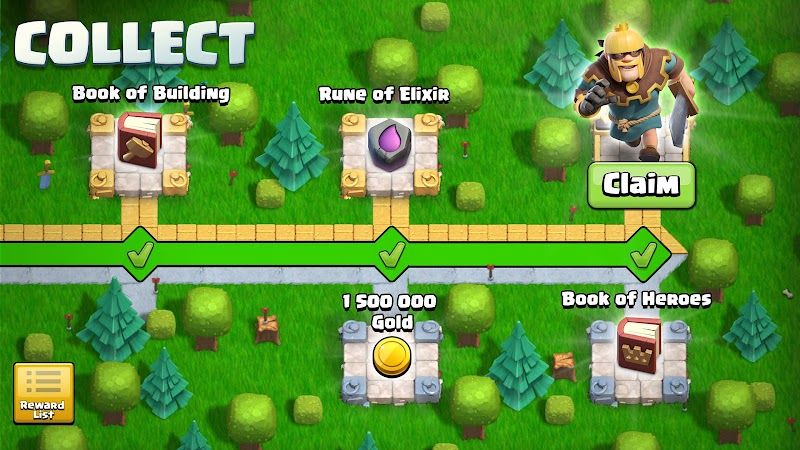 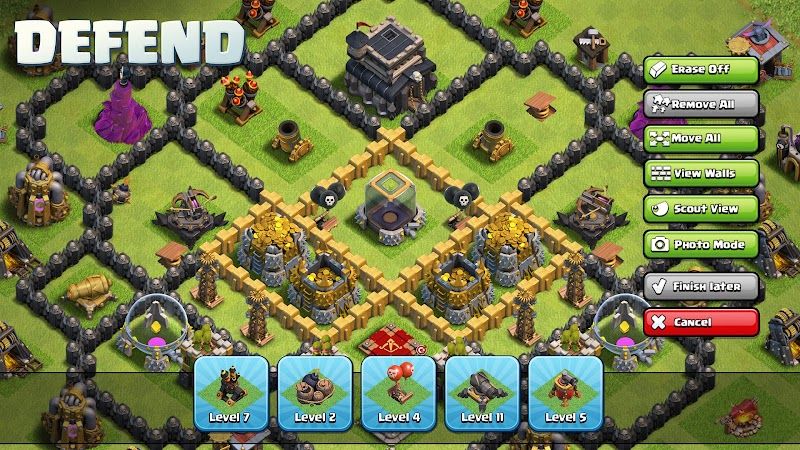 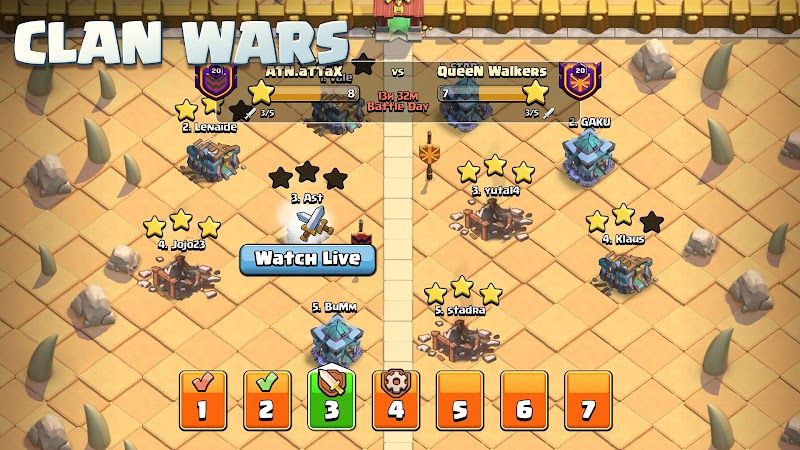 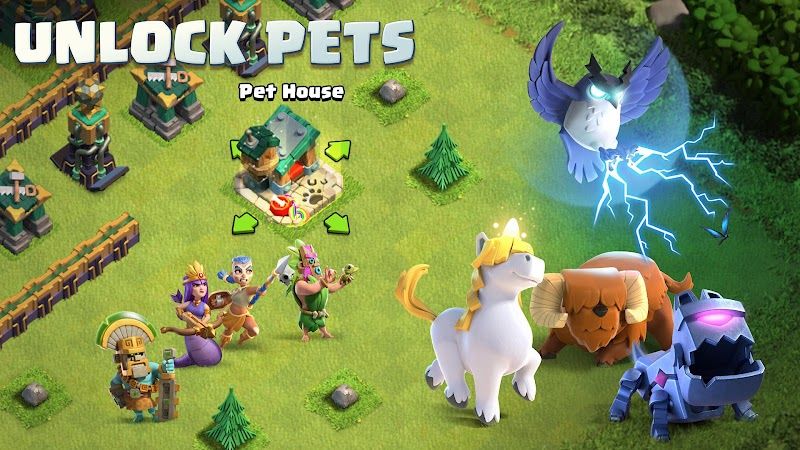 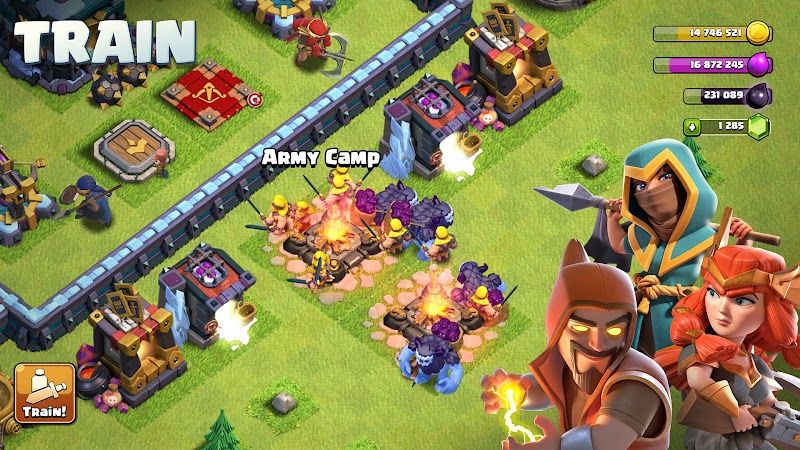 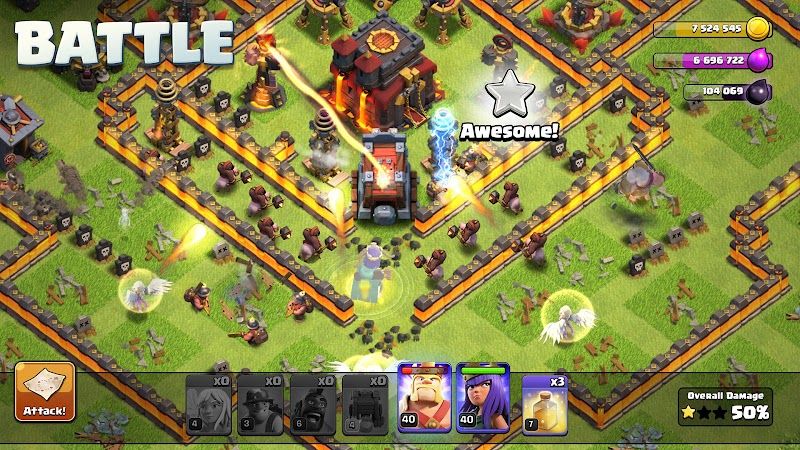 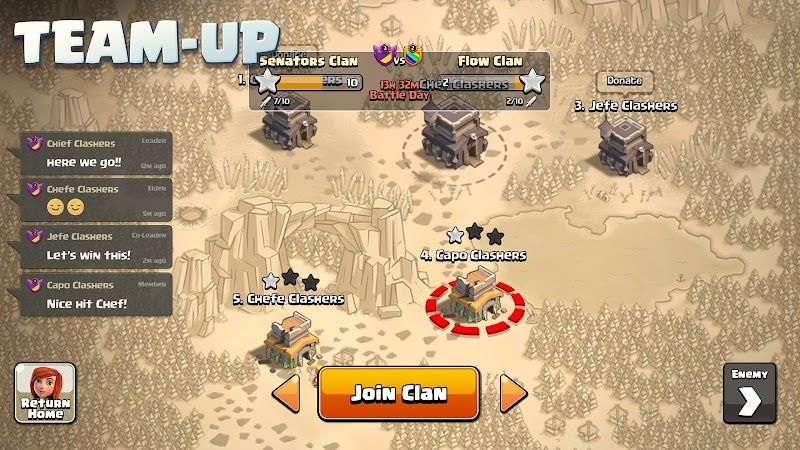 Clash of Clans, also known as COC for short, is a strategy mobile game developed by the Finnish company Supercell Oy that integrates business development and warfare. From the name of the game, we can also know that the game mainly tells the story of the constant conflicts and conflicts among the tribes for their development. The game is a single-player mode in the early stage and becomes a multi-player mode in the later stage. The massively multiplayer online game generally sets up a game network server for the game operator, and the player connects to the server-side of the game operator through the client software to play the game. A typical MMOG can support more than thousands of people playing the game at the same time. This seemingly simple battle contains strategies. When invading or being invaded, you need to know how to arrange your troops and how to defend against enemy invasion. It seems simple but implies depth, which should be one of the reasons why Clash of Clans is well received by players.

The graphics and sound effects of this game are exquisite. In the face of picky players, only by perfecting every detail of the game can we truly achieve what the players want. As an old mobile game, Clash of Clans can always occupy a place in the game rankings and players' hearts despite the continuous emergence of new games, which shows that its strength is extraordinary. The whole game is dominated by green, and you can see a vibrant look everywhere. Surrounded by trees on three sides and close to the sea on the other side, this geographical location is very beneficial to the life and development of a tribe. The picture of the game is very delicate and the colors are rich and varied. If you look carefully, you can see the different colors of each leaf. Snowflakes fell from the sky, and the village at this moment was already covered by heavy snow, just like the real thing. Even the stones are shaded to accentuate their three-dimensionality. The sparkling sea is not a constant blue, and it is not difficult to see that the color of the sea is gradually changing. Sure enough, success still has to be controlled from the details, and, understandably, Clash of Clans is favored by players.

In addition to the beautiful pictures, the sound effects in the game are also very realistic. As soon as you enter the game, you will hear a beautiful symphony, and from time to time there will be bursts of bird calls, reminding you that you are now in a beautiful tribe that is open and belongs to you. When you are building and planning your tribe, building houses will have a forging province, grinding weapons will have the sound of metal colliding, and you can also hear the cheers of the clansmen when the war is won. Everything is so real, it makes people feel like its borders.

In addition, this game has a variety of gameplay, and the staged gameplay is endlessly fun. In the constant competition, the tribe is also constantly developing. Originally, there were 12 copies of Clash of Clans, and 1-6 copies were relatively simple, mainly for novice players to be proficient in various operations of the game and some fighting methods, etc. When you enter the 7th, you should find that there are many resources, hero characters, and unit construction that are difficult to obtain at this time; you can enter the 10-12. Players, then it can be said to be very powerful. After all, even krypton gold is not very helpful in the later stage, and you must spend enough time to manage it.

I think Clash of Clans is a good game as a mobile game. The game not only combines business development and war, but the seemingly simple game is full of depth, especially in terms of krypton gold, it can be said to be a rare conscience. It can be said that Clash of Clans is completely a good game to kill time. If you have enough time and patience, you might as well try this strategy game.

Clash of Clans is a strategy game in which you can join millions of players all over the world to create your village and form a clan, participating in the clan war. A variety of interestingly-looking troops are at your disposal, including wizards, barbarians, etc. The game is free to play while there are some in-game purchases available. You can disable the function if you don’t want to spend money on the game. Players under 13 years old are not allowed to play this game. To play the game, an internet connection is required. Clash of Clans has 58,148,128 reviews with 4.6 stars out of 5 on Google Play. In the next, we will talk about the pros and cons of the game.

Clash of Clan is so popular among players worldwide for those reasons. To begin with, it boasts a lot of attractive features. In the game, players can choose to join a clan with other players from every corner of the world to play, embark on their journey alone, or invite their real-life friends to play with them. You will team up with others to fight against rivals and earn precious magic items. You are the decision-maker of your team and you can make strategic plans to win the battle, together with features of troops, heroes, etc. Once you win the battle, your name will be listed on the leaderboard which can be seen by other players worldwide. You can collect various resources and acquire loot by defeating other players so as to level up your village. Apart from that, you are also responsible for protecting your village against the invasion of enemies with the assistance of multiple weapons, gears, and facilities, such as Traps, Walls, Towers, Bombs, and so on. You will keep entertained by continuously unlocking a series of heroes as well. Practice mode is available for you in case you want to improve your team without too much actual damage.

Despite its diverse attractive features available to players, there are invariably others complaining about some of its shortcomings. For instance, developers of the game are regarded as way too profit-driving, tilting towards the paid players who spend money on the game. Also, the strategies thought out by them are sort of too much and boring. The new content added to the game can only be accessed by a few people who have paid for the game. Moreover, the match-making mechanics are unfair with a low chance of winning. Finally, some players complain that there is no solo or small group mode available in the game.

In sum, Clash of Clans is a fun and interesting strategic game for players who have plenty of time to kill and lots of money to spend. The game features excellent graphics together with challenging battles in which you can demand a team of warriors to fight against players all over the world to protect your own village or earn magical items from others. You can interact with your friends in the game as well. A variety of mysterious items can be unlocked, adding to the great fun of the game. Meanwhile, the game is still criticized for some reasons. For instance, the game is somewhat profit-driven, making the gameplay unfair for players who don’t pay for the game. Also, the content of the game-like strategies is to some extent boring and repetitive. The random match-ups of teammates are also unfair sometimes. Overall, the game is generally a decent strategy game and it is recommended to those who like to play these kinds of games.