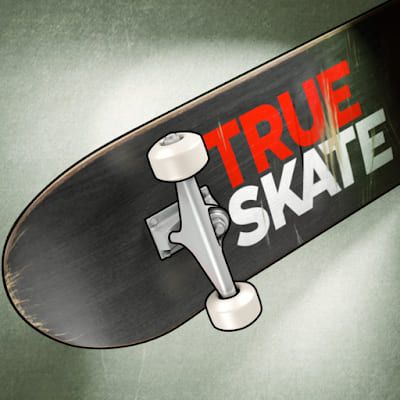 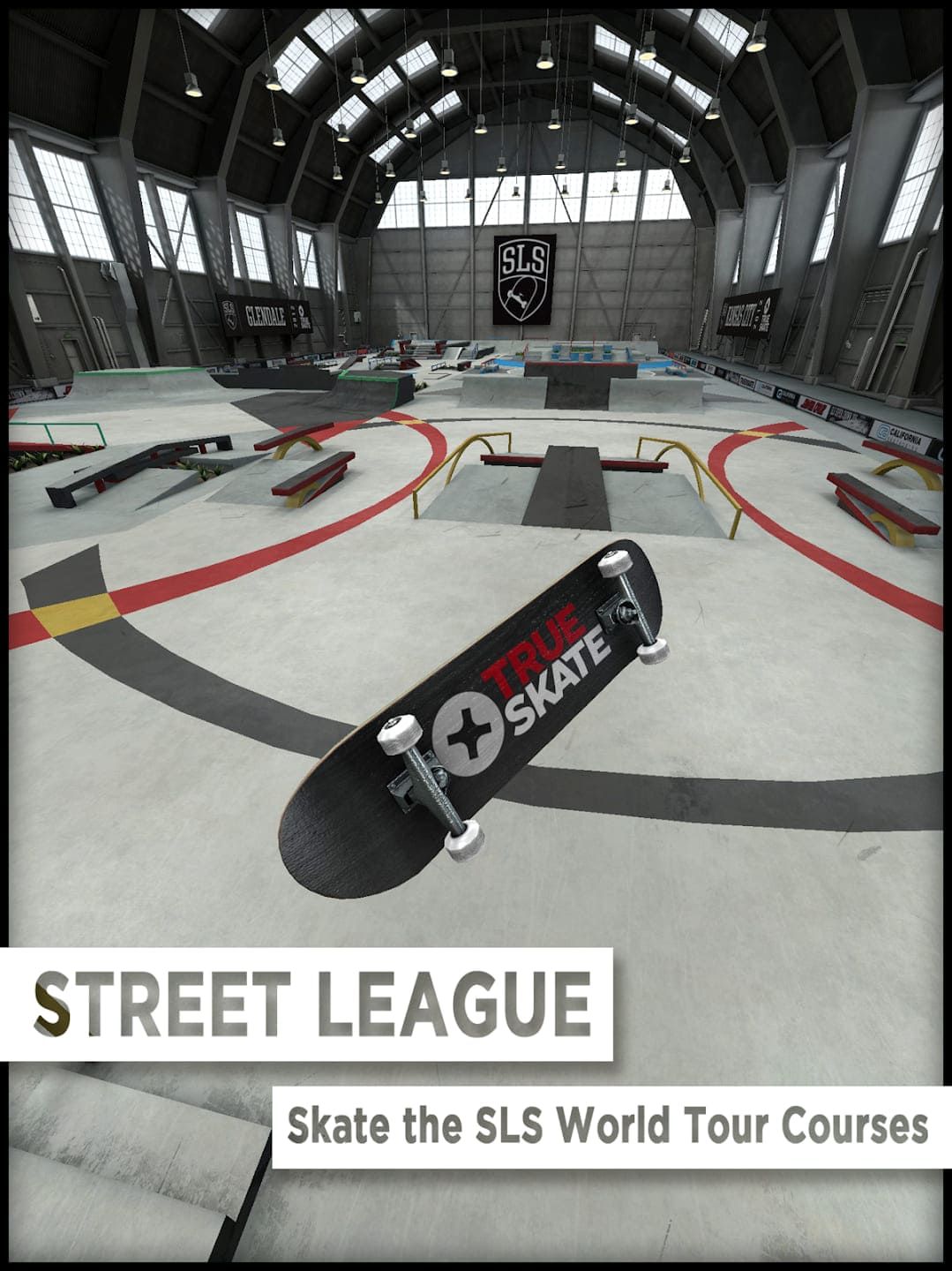 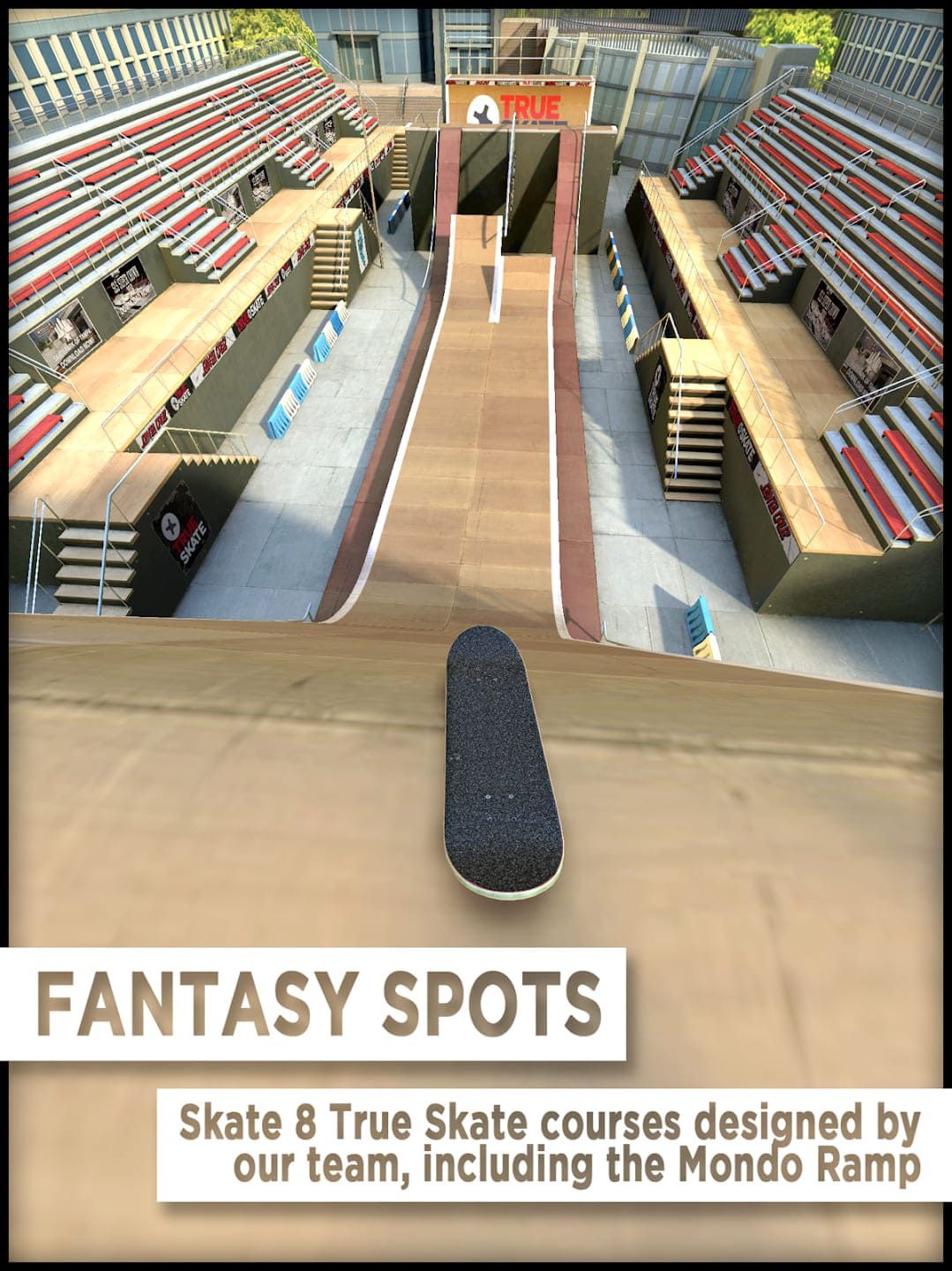 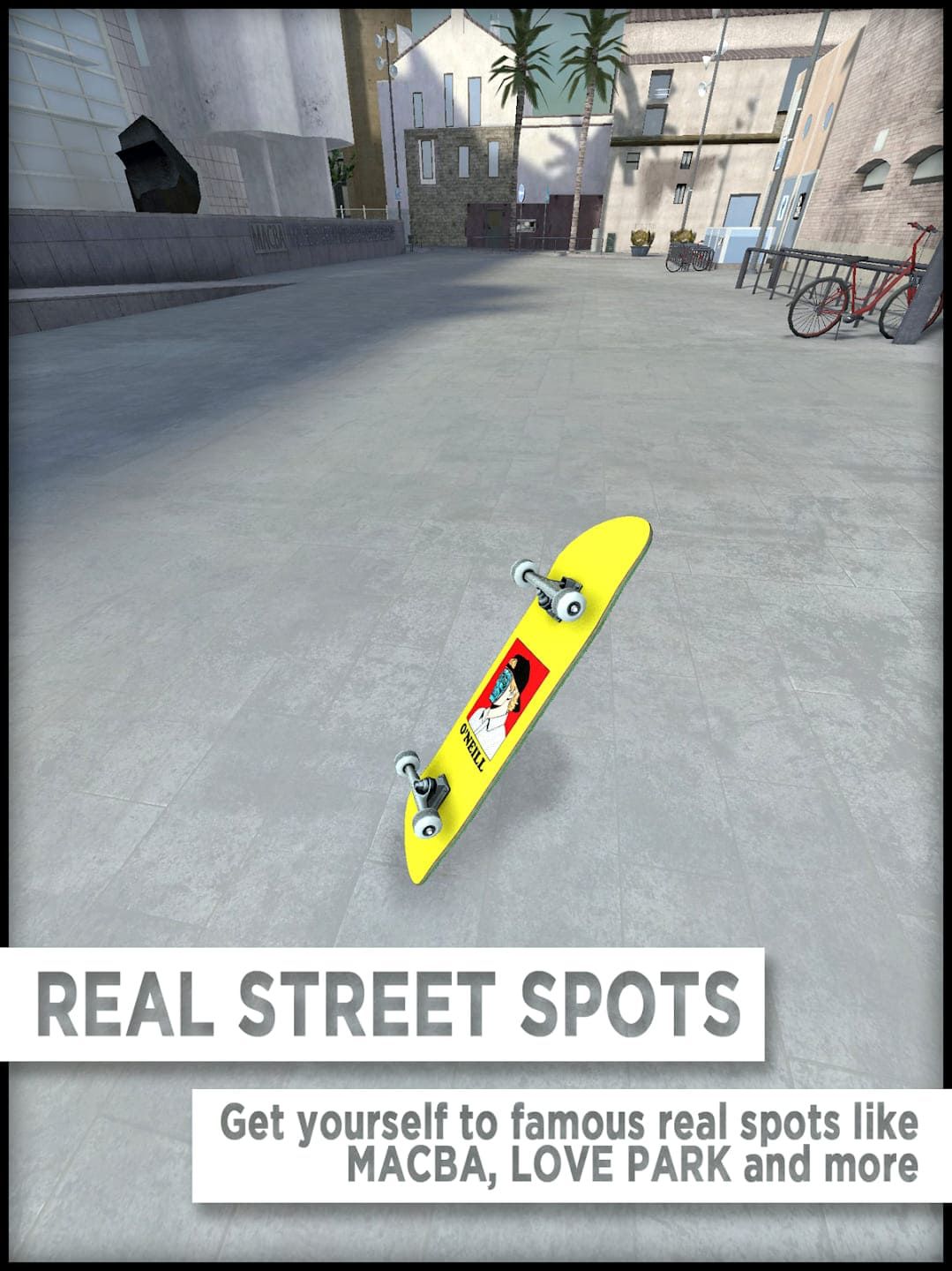 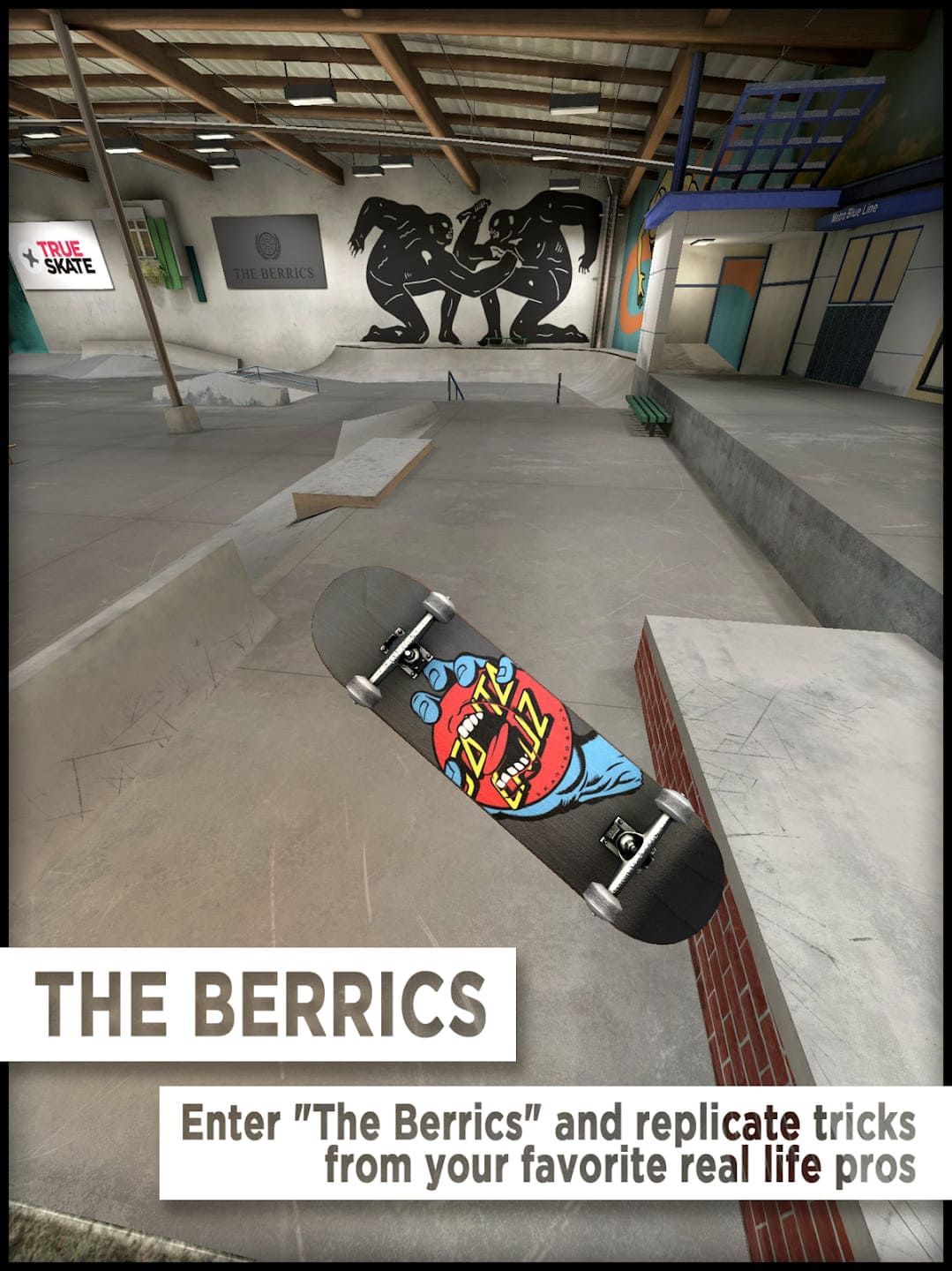 The Description of True Skate

True Skate is provided by True Axis and it can be purchased on iOS and Android platforms at $1.99. This online mobile game simulates the skateboarding sport and it is mainly focused on control and skills in its game play. The initial purchase upon app download allows players to explore one skate park. For more skate parks and other gaming contents, players can purchase them in the app accordingly. This game integrates practice(grind) and skills(tricks) together in its gaming progression mechanism. To be more specific, the main game takes place in those skate parks which involves various types of landscapes and twists. Players need to fulfill each mission and challenge to move forward. To complete a mission, players need to at least complete 70% of the tasks. The higher completion rate players achieve, the better medal reward they can obtain. Depending on their final performance, each mission awards players with gold, silver or bronze medal. Players can improve their result by successfully performing various tricks. Some tricks can bring large bonus and increase the completion rate accordingly. In order to get better in the game, players can spend time and efforts on tricks and grind. Both tricks and practices fall into various difficulty levels from easy, medium all the way to the impossible mode. Apart from the main play,  players can also switch to side games that are based on missions. Players can purchase more missions with real money, or they can unlock new missions through successful completion of previous ones that award them with “True Credits”. TC is a major in-game currency that can be spent on unlocking new missions as well as decorative items, including the design and customized skateboard. Furthermore, this mobile game also offers real Street League Skateboarding courses in its in-app purchase.

True Skate delivers an above-average performance on various app platforms. App Store rates it at 3.8 out of 5 while Google Play sees a 4.3 out of 5 score from 204,365 votes. Aptoide and TouchArcade rate this game at 4.2 and 4.5 out of 5 respectively.

2. Plenty of unlock-able contents and locations with a reasonable price.

4. Good combination of main gameplay and side missions.

1. The game control on some devices can be a bit lagging and unresponsive.

True Skate is a generally well received sports simulation game. It has a high quality game design with nice aesthetic features and smooth graphics. The skate parks are fascinating for players to explore and the playing contents are extensive. The complexity of the skate park layouts increases the playability of the game and it challenges players to keep practicing and getting better. The motion control of True Skate is specifically designed for mobile screens. Players can perform and practice a diverse range of tricks and motion changes with a simple and intuitive touch-screen mechanism. The difficulty level is reasonably distributed in both tricks and practices, where players can opt for the right intensity according to their own abilities. Alongside the main game, players can alternatively play those side missions. Although the game offers mission purchase, players can still unlock new missions without spending money. Successful completion of the current missions can bring rewards to players with the in-game currency—True Credits, with which players can also buy special items to decorate and personalize their skateboards. Overall, True Skate integrates engaging sports simulation and decorative elements together with good playability. Plus, the in-app course is a nice educational touch for those who are actually interested in the sport. Although there are a few technical bugs that should be fixed in its future updates, this game in general is worth playing for its realistic simulation experience and rich gaming contents.

The Description of True Skate

True Skate is a skateboard simulation mobile game launched by True Axis under the official name of the Street League Skateboarding. With a default skate park that can be accessed by all players, there is also additional content of multiple skate parks for players to enjoy after they make in-game purchases. The realistic touch-based physics and detailed graphics render an authentic skateboarding experience for players and players only need to drag their fingers to control the direction of the board. A wide variety of elements are contained in the park in order to enrich players' skateboarding experiences, varying from stairs, and ledges, to pipes. Try to challenge different parts of the skateboard using your skills and sharpen your skills throughout the gameplay process. The actions can be adjusted to the slow motion mode and can be rewound multiple times. Challenge objects with different levels of difficulty and see if you can master all the actions. Target at the top of the global leaderboards and impress others with your excellent performance. Features like the additional parks and locations, as well as courses, are only available for players who make purchases. Apart from the park options for purchases, the game also covers a wide assortment of paid features for players to choose from, including missions, unlimited access to slow motion, board image and wheel color changes, lists, and skateboard packs. It costs 1.99 dollars to install the game on personal digital devices.

1. The graphics of the game is of high quality and detailed, offering players a realistic gameplay experience.

3. The controls of the game are user-friendly and only take players one finger to operate.

4. By making in-game purchases, players can access a variety of exclusive features in locations and unlimited access to various functions.

1. The game is overpriced, not only because of its installment price but also due to the multiple in-game purchases.

2. The response of developers is quite slow.

3. Though it is paid to install and contains in-app purchases, it still displays ads, which can be somewhat distracting for players during gameplay.

Featuring powerful functions to enable players to have an authentic and immersive skateboarding experience, True Skate indeed successfully provides players with endless entertainment and chances to get involved in the sport of skateboarding whenever and wherever they are. You can review the excellent moment of your action by rewinding or slow motion. The worldwide leaderboard will motivate players to compete with each other for a higher place on the ranking list. However, the game contains too many in-app purchases and limited the unpaid features for players to have fun, which is a big disappointment. What’s more, customer service responds too slowly to users’ feedback. Generally speaking, the game is suitable for players who have plenty of time and money to kill, or else it will cost you an arm and a leg. Overall, for players who are interested in learning about skateboarding, the game offers you a great chance to pick up relevant knowledge.