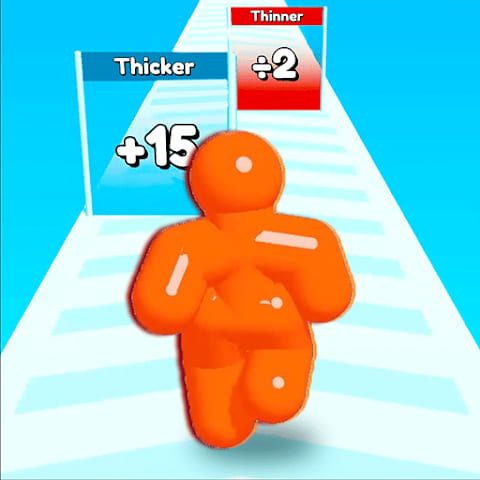 The Description of Tall Man Run

Tall Man Run is offered by Supersonic Studios Ltd., and it is available on both iOS and Android platforms for free downloads. This game can be played for free with ads-walls and it also offers in-game purchase options for upgrades and special decorations. The goal of the game is very straightforward. Players race through the course with numerical gates and various obstacles. Their aim is to pick better gates to boost up their stats and dodge the attacks from the bots. Towards the end of the course, players need to confront a boss. Successful defeats against the enemies will earn players rewards including scores and gems. Scores are the targets of each level and players need to reach certain score to complete the challenge and move forward. Gems are the rarer in-game currencies that can be spent on upgrades. Players can regularly use gems to purchase power-ups to either gain height, size or speed of the running character. Gems can also be spent on decorative items such as special skins and effects. If players do not have enough gems, they can use real money to purchase those items. The control of this game is very simple and minimal on mobile devices. Players only tap, hold and release to navigate the character, run and pause on their running course. To tap the screen, players can choose gates with multiplying effects on either height or width (get taller or get thicker); tapping can also help runner to doge in-game attacks from the bots and other obstacles. When players see moving hurdles, they may release the tap to pause and observe. This helps them get a hang of the motion patterns of certain hazards. Regardless, the goal is to not bump into any of those hurdles, otherwise the level has to be restarted all over again.

In general, Tall Man Run receives a good market rating. It has been installed for over 5,000,000 times and receives a 3.9 out of 5 average rating on Google Play. Users on App Store give it a very positive sore of 4.6 out of 5. Gameloop rates the game at 4.0 out 5 and Compsmag sees a 9 out of 10 score.

1. Tall Man Run can be played in both online and offline modes.

2. The gameplay is easy to follow and very relaxing.

3. The motion control is minimal and intuitive.

1. It might be a bit laggy on some devices.

2. The gaming sessions are 10-20 second long but there are multiple ads in and out of those sessions.

Tall Man run is a racing game designed within the conventional structure of this genre. It integrates four key mechanics of casual racers: running course, gates, obstacles and rewards. The running path is lineage from a bottom down to upward viewing angle. Like many other racing games, this one also integrates gate-selecting mechanism. Gates in this game include both numbers and features. Either choosing to gain height or width, players shall usually opt for the larger number of multiplying effects. Besides, the obstacles in Tall Man Run  combines both computed bots and other hurdles, which adds the playability of the game. At the final part of each level, a boos fight is included. Therefore, this game is packed with many elements such as decision-making, dodging and combat. The rewarding system is also quite classic. Running scores decide the leveling up progress as well as the starting advantage of next levels; gems help players to upgrade along the way as the game is getting harder on higher levels. Overall, this game is coherently made with stable features and interesting gameplay. There are some occasional technical bugs that should be optimized in further app updates and the offer of gems could be a bit more generous.

The game Tall Man Run is a fun parkour game developed by supersonic studios Ltd. The gameplay of this game is relatively simple. The player is a stick-man character in the game. Players need to accumulate strength in the levels to make themselves taller and stronger. Players can destroy the robots after passing through many obstacles. This game is a common stick-man-shaped parkour game. The game setting is very interesting, and some details also show thoughtful design. Very thin stick-man can become taller and stronger by collecting energy.

First of all, this game has different challenges and different levels. The different modes and scenes in the game bring players a very rich experience. Players can choose interesting levels according to their own preferences. The map in the game is also very large, and the player's degree of freedom is very high, but the player needs to control his tall character, constantly advance through the level, and avoid a lot of obstacles to collect more gold coins and obtain more coins. more points. Tall and fat characters are also designed in the levels of the game. Because in general, the taller the player is, the stronger he will be, the faster he will pass the level, and the more points he will get. From the first level, the difficulty is not very high, but as the level increases, the difficulty becomes higher, and players need to have a construction and a tall figure to continue to pass the level. The gameplay of this game is standard casual stick-man action parkour. The stick-man can gain height in the level, and can also increase his waistline, so that the originally very thin character becomes a tall and mighty general. In addition to common computing functions, the game also provides energy collection links, some of which even require players to reach a certain height before they can be obtained, which is one of the reasons why players need to constantly make their characters taller and stronger. The boss at the bottom also requires players to collect all the new energy to have a chance to fight with them. After defeating the boss, players will get very rich rewards.

In addition, the picture of this game is very cute style. The 3D cartoon art style makes the swollen stick-man look like candy, showing different effects. In terms of character skins, this game provides different types of color matching and different types of shapes for players to choose from, including some characters with colorful changing colors. In addition to the different skin colors of the characters, the system also prepares hats and other accessories for the players to decorate these characters, which makes the player's interest a lot higher, because the player can make his character more based on his own subjective habits and hobbies. With personalization. The background of the game is mainly sky blue, and the color of the background is gradient, which is very fresh. The stick-man in the game is also relatively monotonous, and the color is gray, but after the player gives the stick-man accessories and chooses different costumes, the stick-man will become more individual and characteristic.

However, the repeatability of this game is actually relatively high. Although there are many levels in the game, the player's tasks are very monotonous, that is, to pass different obstacles, cross different bridges, etc. to achieve The unlocking of the next level, and the collection of props in the game is also time-consuming. Players need to continuously accumulate points in the process of passing the level, and even need to watch some advertisements to obtain the use of some props. In other words, players need to spend a lot of time and energy in exchange for the use of props. There are not as many types of props in the app store as imagined, which limits the enthusiasm of players, because no matter how hard players try, they cannot get these props very quickly, and it takes a lot of time and energy to explore slowly and collection.

In general, if you are a fan of parkour games, or you are very interested in stick-man modeling, then you can try this game. It allows you to realize your own value by virtue of the continuous accumulation in the game.