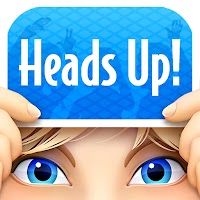 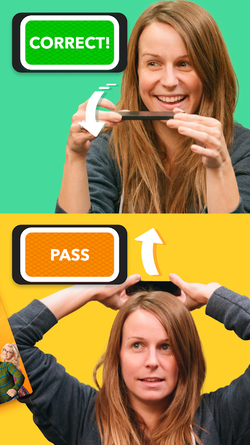 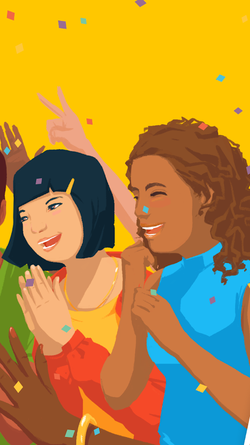 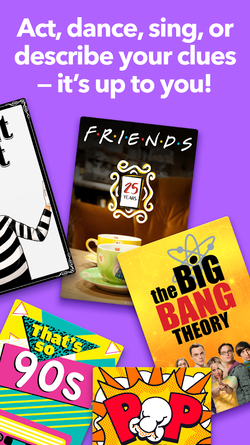 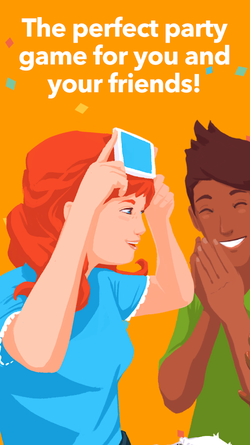 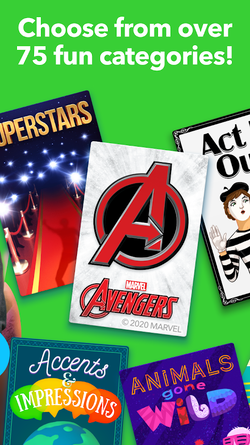 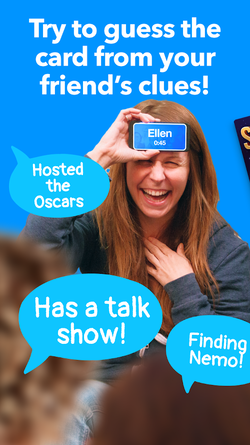 Heads Up is a simple but fun game, it is said that it was popularized by the famous American talk show host Ellen Degeneres. The game is very simple. While playing, one player needs to hold the phone to his forehead, and the other player needs to give hints based on what is displayed on the phone screen, which includes different themes, such as people, accents, animals, and items.

First of all, what I think is cool is that this game format is fun. Heads Up is a game that originated from a traditional face-to-face game, and it often appears on variety shows in various countries. The main content while playing the game is that after the player selects the types of phrase, one person raises the device to the top of his head, and the other person uses non-positive description and body language to perform the text content. And then one player flips the screen down to enter the next word after guessing correctly. Because there is no need to prepare a phrase card in advance, it is very suitable to play at a party.

This game has a very strong social function and also has different modes. Players can choose to play solo or play with a large group of friends at the same time. By default, Heads Up has six categories, each with a decent number of cards. The categories include Celebrities, Movies, Accents, Animals, and more. It's a standard party game that will keep everyone entertained, and it's very simple to play, yet makes people laugh. Indeed, this game is very suitable for everyone to play together at a party, mainly because this game can easily be played by everyone. The game Heads Up itself is quite popular. In the era of electronic products, there is less communication between people, but this app can still increase the communication between people. And the promotion of Ellen Show has made this game a thing that is accepted by the upper class. So there is a certain inevitability to the popularity of this game.

The promotion and positioning of this game are very good. As just mentioned Elle. Ellen's star power is indeed a major factor in user growth. Ellen has a lot of apps under her name, and they are all doing well because she is trying to promote these apps. The publicity in the ellen show is very powerful. Many celebrities who are guests have played this game with Ellen, and these stars are also very powerful and expressive, so the effect is very good, you can see Emma Thompson's issue, is going to laugh. Ellen shows are very popular in the United States. The audience is either star-chasing teenagers or housewives. They want to play the same game with their favorite celebrities, so they go to play this game. Moreover, the audience of Ellen Show is generally teenagers and housewives, and these two groups are also the main groups for parties, and it is natural to promote the active atmosphere at the party. Therefore, the target positioning of this game is very clear and full of temptation.

In addition, although this game is simple to play, it has certain challenges. Because this game especially tests the player's ability to associate, as well as the tacit understanding between the two players. After all, a person's understanding of the same thing is different, so the ways of presentation is also different, which tests the player's expressiveness and tacit understanding. Indeed, these joyous challenges add some fun to a boring life, right or wrong. You can experience a lot of challenges, make players laugh, and let players experience a sense of accomplishment.

However, the limitations of this game are also obvious, that is, it is very suitable for offline development, but not very suitable for online. Now that the new crown pneumonia epidemic is particularly serious, everyone is maintaining a safe social distance, and people's gatherings have been greatly reduced, so this game has a lot less use. Although this game can also be played online, I think it is far less interesting than offline play in terms of interactivity.

In general, this is a very fun casual challenge game, which tests the player's logical thinking ability. It has a wealth of topics and a variety of contents, allowing everyone to challenge as much as they like. Here one person describes it in body language and someone guess. So see who can guess more correctly, and pass the time!

Offered by Warner Bros. International Enterprise, Heads Up! is a widely recognized word-guessing gaming app originated from its physical card game  packs. It is a popular party game for family and friends with simple game rule and relatively large catalogue of game themes. The app is available on Android and iOS platforms with in-app purchases for different items. The gameplay is rather easy to follow given its party game nature. You can play either on solo player mode or team mode. As a solo player, you play for your own victory as a guesser, while other people will give you clues for guessing the correct words you hold up on the screen to your forehead. There are various of categories and themes you can choose from before the game start. And once kicking start, you’re given 60 seconds to guess each given word. If you are struggling with the answer then you can simply skip to another one. Besides, you can choose to play under a regular difficulty level or opt for a challenge play, which gives you higher score counts in the end. Whoever has guessed the most words in the end wins the game. The team mode follows the same rule, but the difference is that players are divided into two groups and each team member takes their turn to be the guesser and clue giver. And clue givers can only give hints for their own team guessers. The winning team will be the one who got the most number of words guessed right.

This game has been very popular and a crow favorite on parties for quite some time since its release. Indeed, the word-guessing gameplay well fits a group gaming dynamic and its rules are quite easy to follow and kick a start. Besides, the categories it offers are quite mainstream and cater to a wide range of tastes. Themes such as guessing celebrities and music and popular movies have long been well-received. Apart from shouting out the clues of the words, player can also opt for a silence category “act it out” where they must use non-verbal but body language to give hints. Another feature that makes this mobile app version appealing is the game recording option, with which players can save their fun party moments with their family and friends and they can share those on social media directly.

Indeed, the mobile version does have some technical hiccups, such as the motion freezing issues and auto logouts, which can be rather annoying as a party entertainment.

In general, this game has been popular for a reason even though it is nowhere near really innovated and unique. Its popularity mainly lies in the generic categories that have already been proved popular among the public. Heads Up! simply incorporates those popular elements and themes together and packs them in one game, which makes it quite handy for a group of people to play. Another important reason why it is well received is that the game pace and rhythm fit a group event or party dynamic well. The genera gaming time lasts about 25-30 mins, which is around the average attention span for a group of people; This guarantees a relatively diverse contents to be guessed in each round of the game without dragging too long till everyone loses the patience; besides, the 60 second ticking clock creates a good amount of excitement and intensity of the game while the “skip” option keeps the game from being too stressful for players. To put it another way, such pacing and mechanism make sure players acquire some short-time excitement without feeling burned out in a reasonable game session. However, this does not mean the game is perfect. Time-tested it may be, I still find some problematic things in its game design. For example, the single player mode and team play are essentially incompatible as the former’s victory relies on the clues given by other competitors. Regardless, I think this game might be a hit or miss for most people assuming players more or less know what the game is about before they decide to purchase or not.