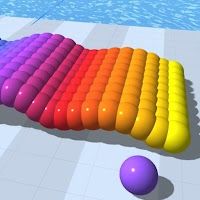 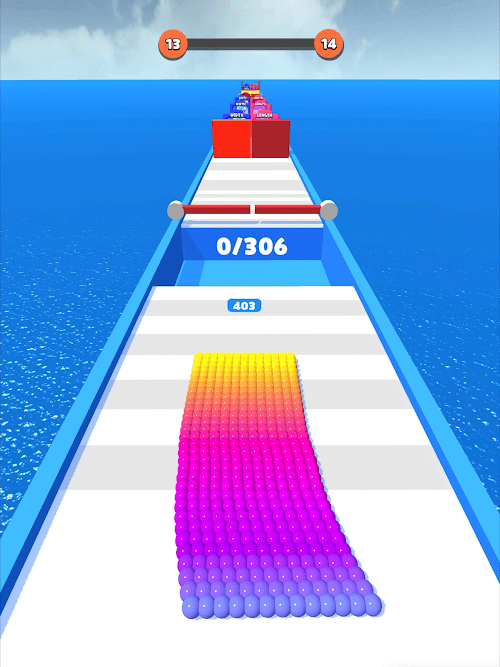 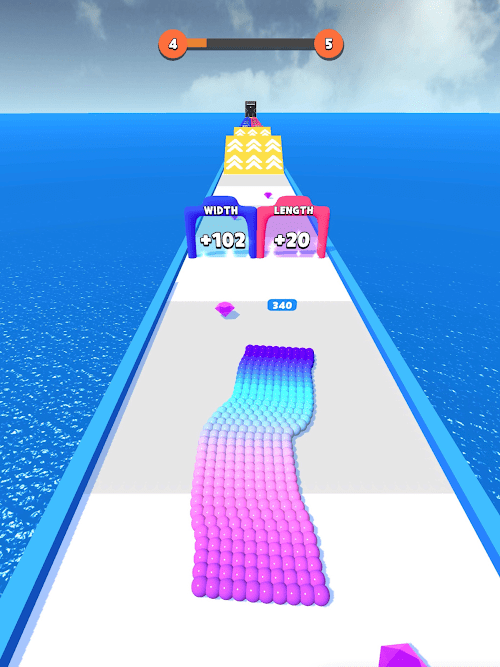 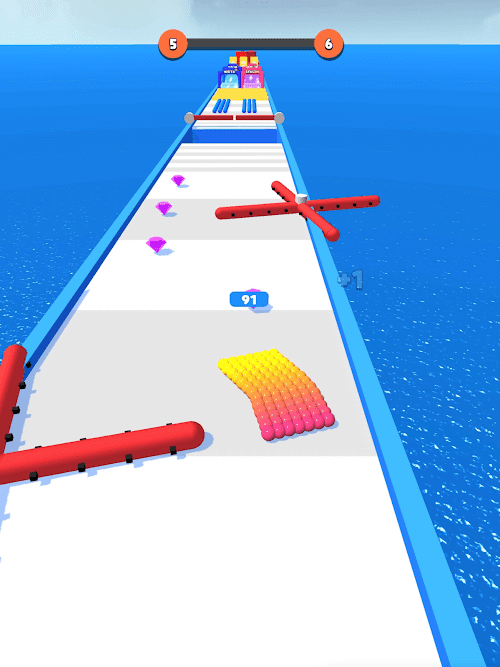 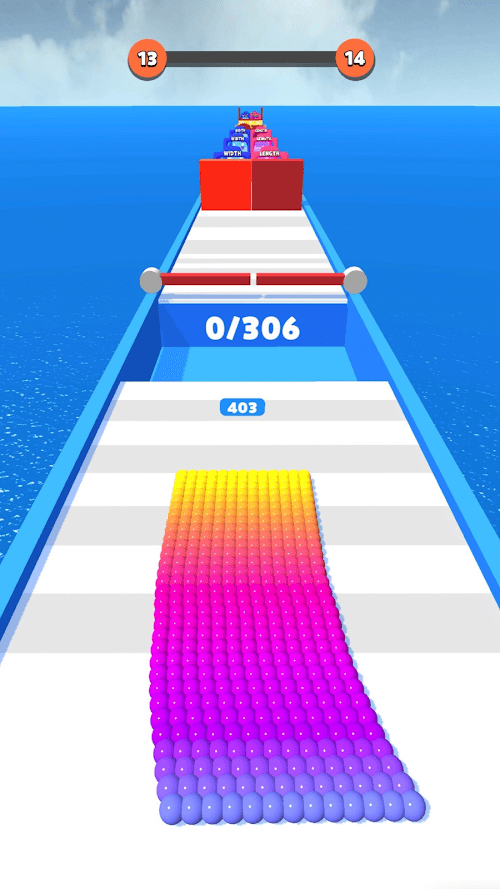 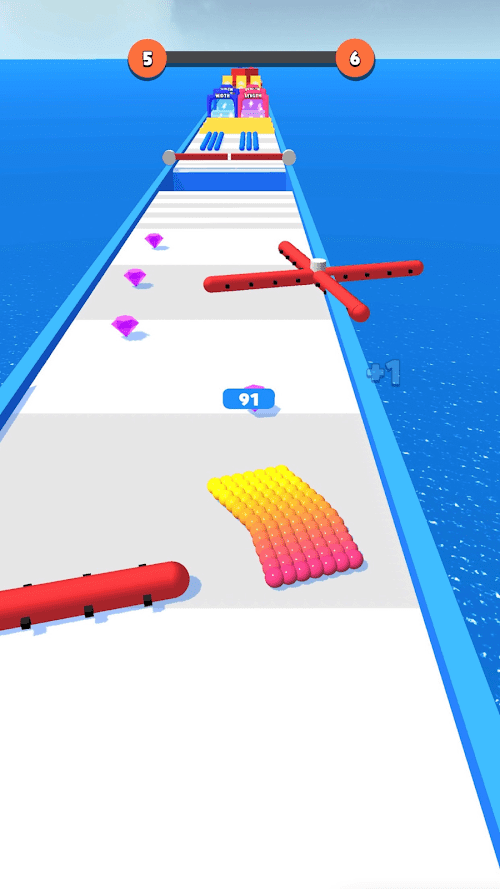 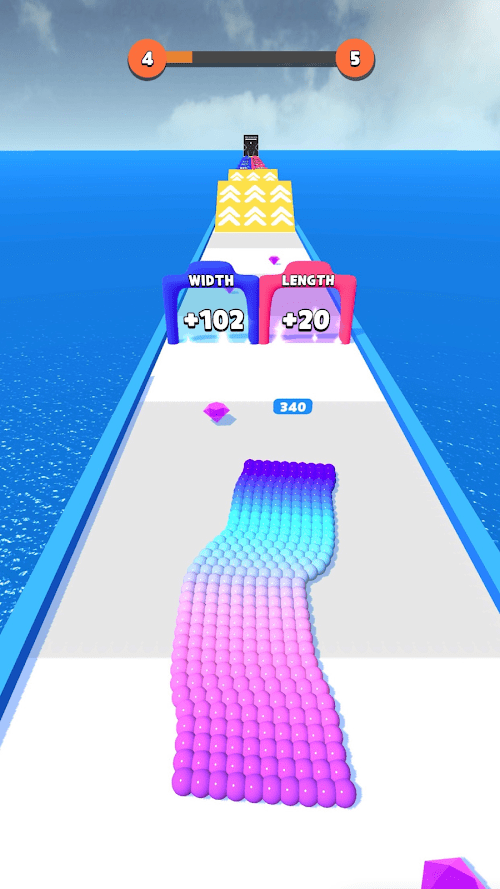 Canvas Run is a 3D mobile game developed by Voodoo in 2021. This easy and delightful game can be run on both iOS and Android devices covering all age groups, which makes it an ideal option for those who are looking for a relaxing gameplay. The rules and game control are rather simple and family friendly. Both children and adults can enjoy this game in a totally laid-back mood and your boring hours will be brighten up by those vibrantly colored balls. The goal of the game is very straightforward – forming your own canvas made of colorful balls in various formations and patterns and navigating your way through all the levels of different obstacles and boosting your total score. And the game control is absolutely minimal which means you basically just keep swiping across your device screen back and forth, left and right to guide your ball legion as you wish to pass through or shy away from the barriers along your way. Well, it might sound oversimplified, yet there are so many twists and surprises while you are playing all along.

Throughout the game, players can roll and extend their balls in two different formation dimensions: horizontally widening or vertically lengthening them. Either way makes sure the volume of your canvas remain consistent and caters to your aim of the current challenge. You can flexibly adjust your formation to get through the obstructed landscapes smoothly in each scenario on the platform. This decision-making mechanism adds more surprises to the game where a diversified collection of landscapes may be encountered, including walls, turning wheels, ramps, arches etc. Those twists and turns beef up the gaming excitement and occupy your entire attention.

Although the gaming mechanism and design seem plain and simple enough, gamers would not necessarily find this game too easy to play. Instead, in order to get a higher score in the end, players need to develop their own coping strategies to deal with the constantly changing patterns of obstacles that enrich the gaming layers and experience.  At each phase of the scenes, players are allowed to make choices that lead to different results. Selections include the number of balls, the direction of stream extensions, number deduction walls, gems to collect and so on. Those somehow unpredictable and inconsistent motifs offer a lot of fun rather than a straight-up scoring gameplay. Besides, the bright color scheme of the game design and vibrant 3D graphics make it all too easy to spot on your aims and targets without distractions and ambiguities.

Therefore, it is safe to say that Canvas Run is an enjoyable game for all regardless of their age and gaming experience. The simple yet delightful visual effect and quick-start gaming mode enable this game to be extremely accessible. And the generally straightforward gameplay with a little twists and drops here and there well balance the relaxing vibes and challenging kicks.

On the other hand, there are some downsides of the game. The most obvious one is the repeatedly complained advertising, which can be rather distracting while you’re submerged in your run. Another issue that may happen occasionally is the distortion or glitch of the scenes during some jumping motions. Apart from that, I also find this game somewhat addictive, which of course could be both a positive and negative thing depending on how far you go.

Overall, I would say Canvas Run is an excellent time-killer and mood-changer. You can play it in your sleepy boring afternoon, or you can go for a run during a busy crazy day to wind down your nerves and let the lovely color enhance your mood. Families with children may also find this game entertaining and relaxing. Just make sure you do not over exhaust yourself in those ball streams.

Canvas Run is a very classic parkour game. The overall operation of the game is very unique, and players can complete the challenge through flexible finger swiping.

First of all, this game is a test of the player's finger reaction speed, because the main task of the player is to control the character and let the character run forward sharply. Because the road ahead has different high and low buildings, players need to jump and climb flexibly between the flexible floors. When passing through the acceleration belt, gamers will also jump higher and farther, which is beneficial to help you get rid of other competitors and reach the end of the race better and earlier. Players have many actions in the game, such as wall jumping, high jumping, cat jumping, precise landing, etc. Players can get more skills by constantly upgrading and getting gold coins so that they can run faster. The faster you run, the more likely you are to be the first player to reach the finish line.

In addition, this game also has a very rich variety of props. The gameplay of this game is very simple and easy to use, but if you want to play it particularly well, you need a lot of skills and a lot of props. In the system, players can use different props to defeat other enemies to win. Moreover, these props can help you reach the end quickly, and can also help you to attack the enemy, so it is very important to get the props. Game props are very important, but how do get them? Players can pick up some props during the game. For example, in the game scene, some props can be found in some hidden corners. In addition, players will get an increase in points or an increase in gold coins in the process of playing, and these items can also be exchanged through points or gold coins. Another way is to buy or watch ads. With these props, players will be more likely to win the game.

However, in this game sometimes you need pay money to reach a relatively high level. Because in this game, you want to get more props, mainly by charging money to become a VIP member of the game, or constantly watching some video advertisements. Because if you watch the video, he will reward you with some props, so from this point of view, that said, this game is still a bit of a waste of time. And the continuity of the game screen is sometimes not very good. For example, I occasionally encounter some freezes. I don't know if it is because of my personal network problem. I sometimes experience lag when playing this game, I think it may be the reason why I am playing this game in a bad network environment.

In general, if you like action and parkour games, I think this game is very worth experiencing because it is very smooth and the visual effects are very good. The music background is simple, but it fits the theme of the game very well. Of course, if you want to keep rising to a higher level, and then successfully win each level, I think you need to watch some advertisements to a certain extent.