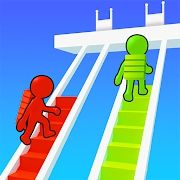 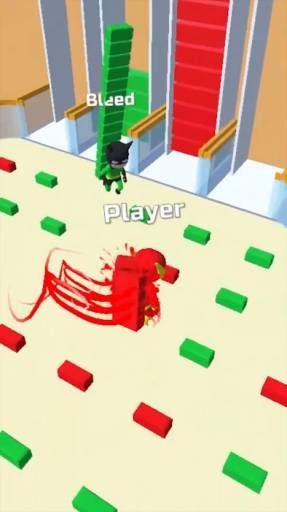 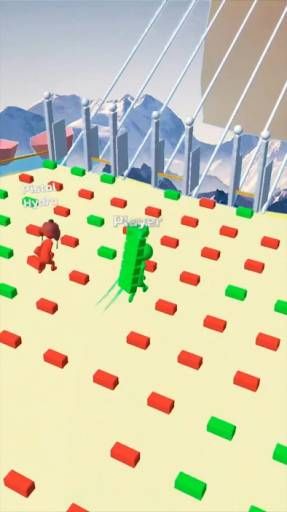 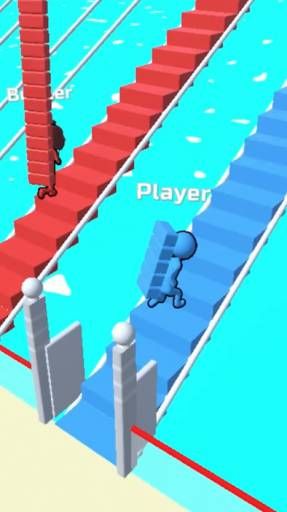 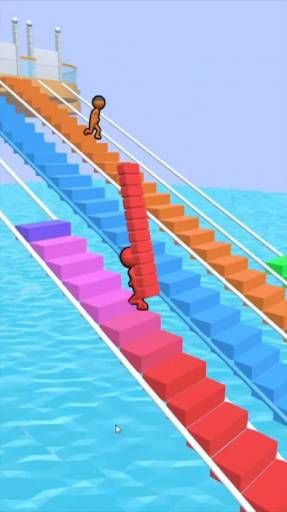 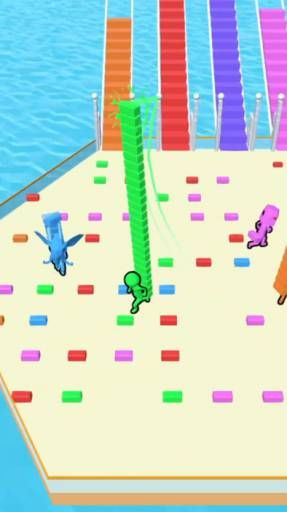 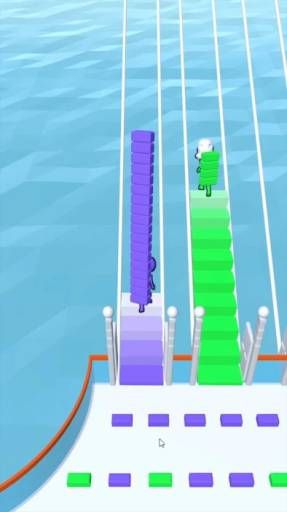 Bridge Race is a magical parkour game, as well as a casual competitive free mobile game. The theme of the game is building a simple bridge. The game was launched by a foreign game company named Supersonic Studios. Players wear stick figures of different colors in the game, collect bricks with the same skin color in the field, and lay them on the bridge frame to build their bridge. To enhance the entertainment of the game, the number of bridge frames that can be built in each level is less than the number of players participating in the game, that is to say, players in each level need to build bridges of their colors under a limited framework, which is rich in competition. It also comes from this. This game not only tests the player's hand speed but also tests the player's strategy ability. Players need to be the first to break through the finish line at each level.

First of all, it is worth mentioning of Bridge Race is an interesting mobile game of brick-moving type. Compared with the more popular easy decompression theme game "I am the Strongest" in the past, this game draws on the previous game. The collection and construction of the gameplay, and then add competitive attributes to the game by setting a limited bridge framework, which strengthens the player's entertainment in the game. After all, compared with level games, competitive games with competitive attributes are more in line with the entertainment characteristics of most players. I think this is one of the important reasons why Bridge Race is particularly popular.

In addition, the gameplay of this game is very unique. The gameplay of Bridge Race is mainly divided into two parts, namely collection and construction. Each level map in the game is the same. In the beginning, 6-8 people will collect bricks of the same color as themselves in the same open space, and choose a bridge frame to lay at will. When the bridge laid by the player is completely connected, it will be Access to the next venue. There are two points to note here. First, since the number of bridge frames that can be laid is less than the number of players, players will compete for a limited number of bridge frames, at which point players need to fight for ownership of the bridge by overriding other people's colors. Secondly, players should not be complacent even if you are the first to pass the first level. And three bridges are waiting for the player to build in each level, so whether it is the first to pass through the first or the first to get ahead, and the player has the hope of winning the level.

The graphics and art style of the game are very good. To make the game as a whole based on real effects, the level scene with the endless ocean as the background also brings players a more realistic entertainment experience. Although there is no setting in the game where players can fall into the water, it can still bring players a lot of associations through the pictures of the scene.

From my experience, Bridge Race looks like a casual mobile game, but it has a more intense competitive mobile game color. Whether it's collecting bricks and building bridges to compete for the chance to reach the end, or passively counterattacking and covering the bridges built by the enemy with the bricks you collect, these invisible confrontations are always present in the game. Moreover, with the setting of triple levels, players need to pass three identical levels in a row and survive in the increasingly competitive struggle to win the game.

To sum up, I think, if you like to experience the big smash (io) type of games, if you are a fan of games such as "Moving Bricks, I'm the Strongest". If you are a fan of stickman games, please don't Easily miss this Bridge Race.

Developed by SuperSonic Studio Ltd., Bridge Race as its title suggests, is a mobile racing game with bridge building element. It is available on App Store and Google Play with over 1,000 levels and large variety of colors and character styles to choose from. The game play contains two parts: collecting blocks of the same color as the character in a speedy way and then use the blocks to build your bridge. The block collecting process is highly competitive and speed-intensive. Players must try to pick up as many blocks as the can in a shorter time than other players to gain themselves a timing edge, so that they can complete their bridge faster. The blocks will be scattered around the interface with an auto-refill mechanism and players need to quickly spot on and pick up their objects as many and fast as they can. They can also refer to the road maps to play all around the world. Apart from the actual gaming, extra decorative and customization features are offered and players can choose from a wide range of colors and styles to build their special characters. Besides, the latest version also integrates side challenges where extra coins are rewarded. Plus, players get to interact with others through competing with one another to climb the leaderboard. What’s more, this game is available both online and offline. In other words, players can earn extra bonus coins when watching ads in online mode. And there are also other purchase options such as the Bundles that provider further personalized decorative features and items.

The core gameplay of Bridge Race is simple. Players need to first pick a color of their character and then pick up the blocks of the same color as their bridge building materials. The game control is very minimal— simply rush through the blocks in the designated color collect as many as you can. At the same time, players can launch attacks on other players when they notice that their blocks outnumber another player. In that case, players just simply bump into the other one with less blocks and throw him off his balance, which will force the other player to restart the collection all over again. However, players also need to keep an eye on their unfinished bridges where other players may place blocks of their own colors to interrupt the progress of their rivalries. In that situation, players can overlay and cover the blocks with the correct color to resume the bridge construction.

Bridge Race combines two elements together— exciting racing game and fun construction game. However, it can be perceived that the game is heavily accentuated on its speed element. The graphics and color scheme are not that impressive in general, especially the characters and blocks are not in a vivid 3D visual style. It’s major attractiveness is the fast-paced gaming session with a short-term blast of speedy excitement, where players do not need to resort to any strategy or calculating, but pure pleasure of racing and competition. However, a lack of creativity and twists somehow makes the game appear repetitive from a certain point.

From my point of view, I think the game can improve itself by enhancing the other element of its gameplay. More design feature and strategies may be integrated into the bridge-building process, so that the game can have a better balance and rhythm of racing and relaxing. What’s more, the upgrading options can be extended to more categories since the current range is mainly decorative and not impacting the racing performance. With more speed boosters or even attacking perks, this game would have been more engaging after a few rounds of progressive momentum.