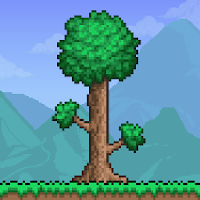 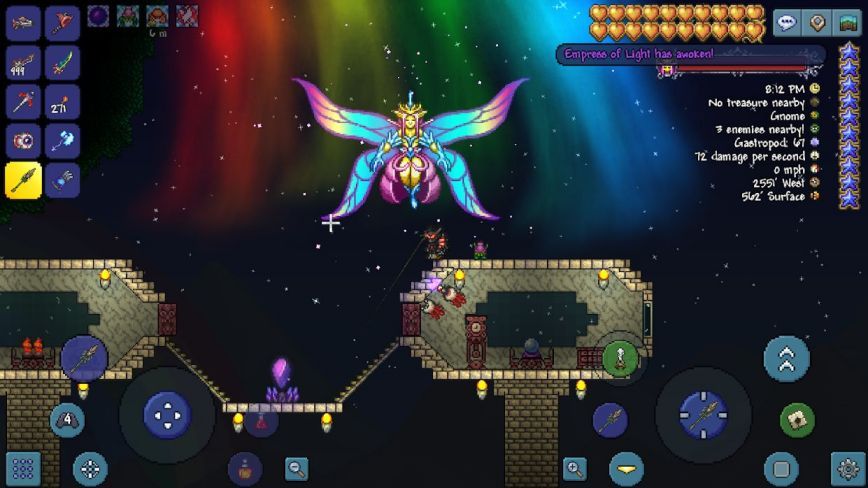 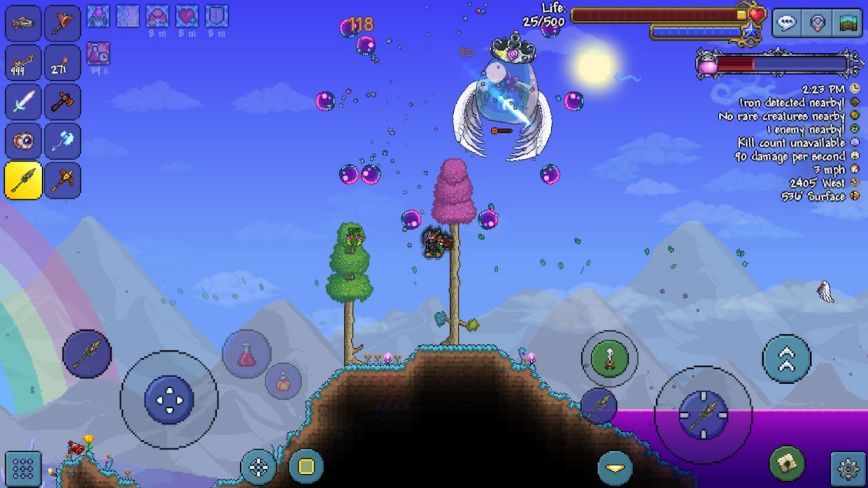 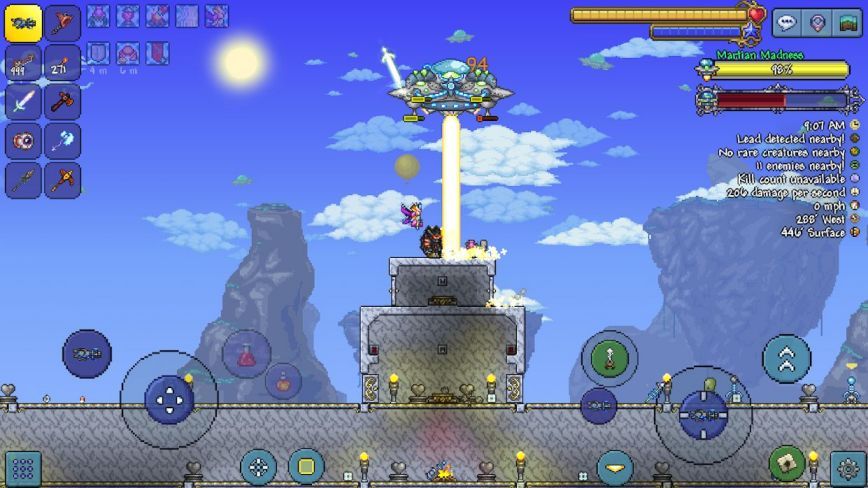 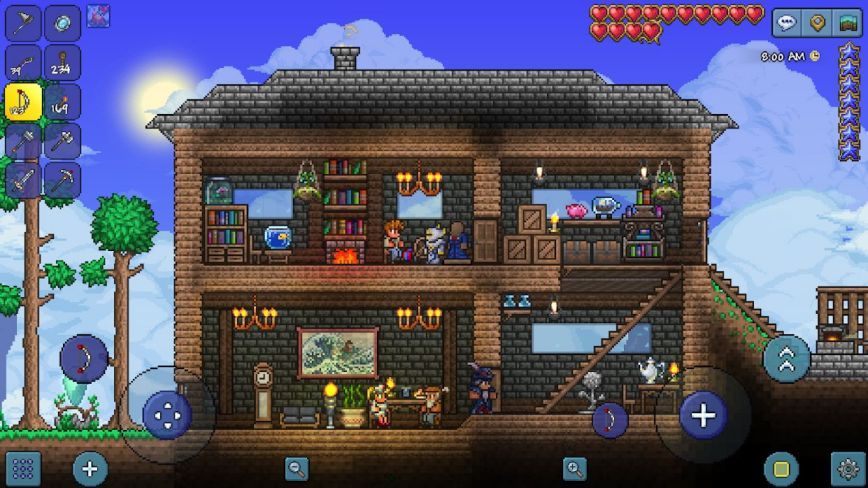 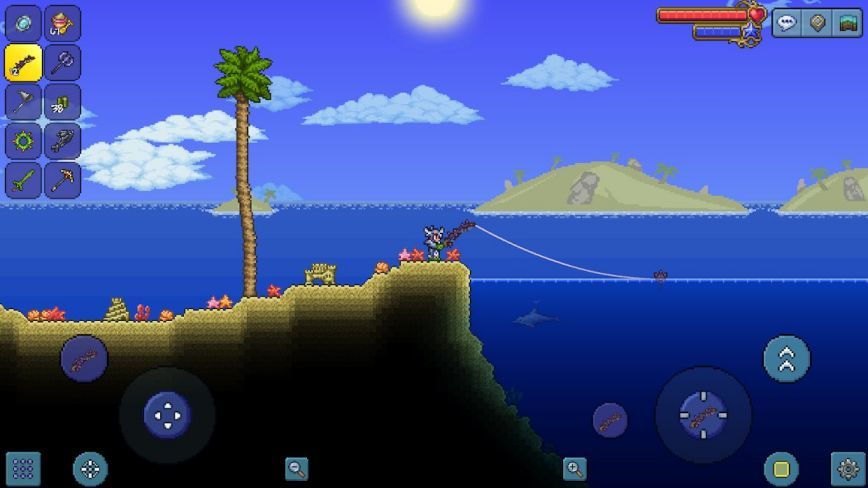 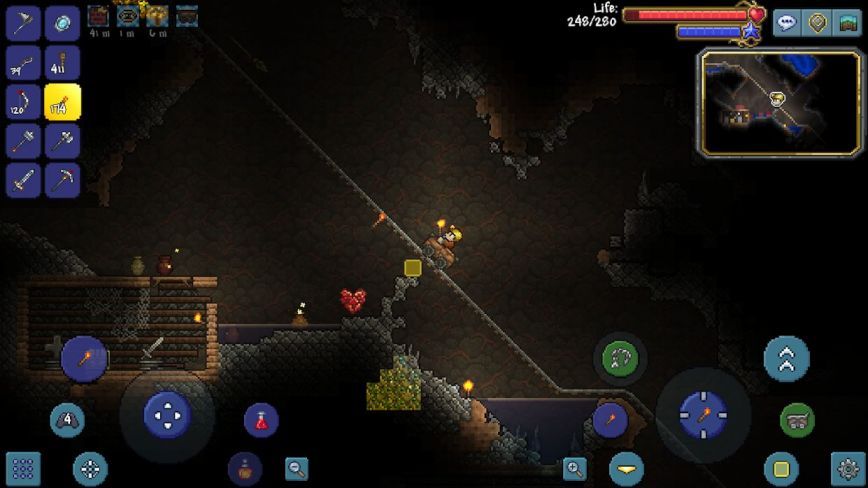 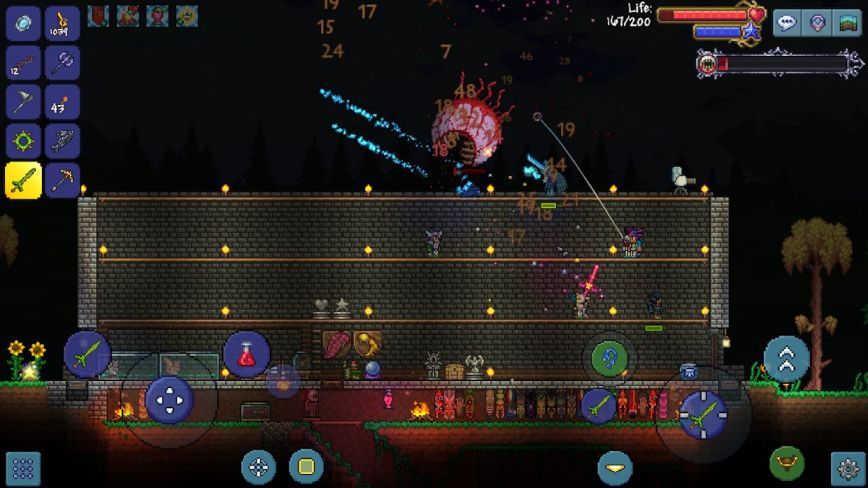 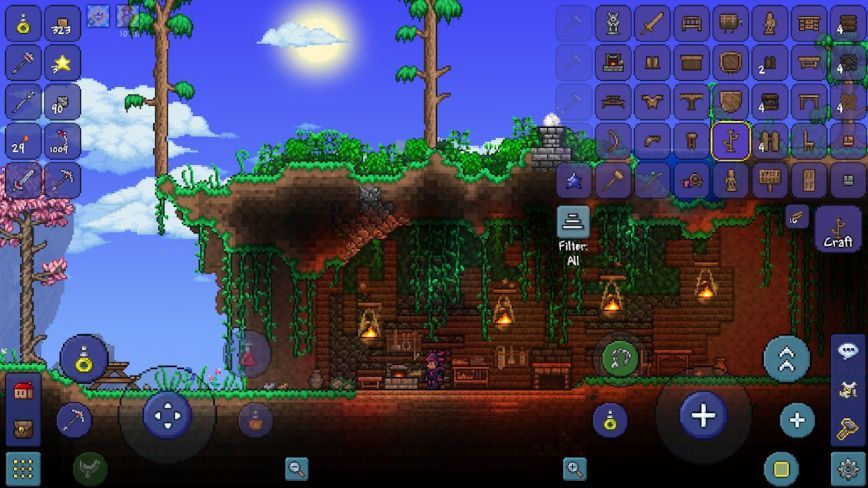 Terraria is a 2D side-scrolling open-world sandbox game published by 505 Games Srl, where players must collect resources and loot to become stronger. As the player's power grows, the player will fight more and more bosses. But what's interesting is that the game has no ending, even if the player defeats the final boss, you can continue to play in the same world. There's even extra content after fighting the final boss. This includes the fact that to craft the best items in the game, the player must defeat the final boss multiple times to collect his drops. This also applies to most other bosses in the game. If players want their loot, they must beat them multiple times.

Terraria starts out simple. Players have control over the characters they create as they are dropped into a slightly customized but mostly procedurally generated world. Players start with just a few basic tools. The in-game NPCs will then give the player some introductory tips to get started in this brand-new world. The player can explore and do what you want, and the player has absolute freedom to destroy and create, to explore and build. However, life in this new world is not without dangers. Players will soon discover that they are not alone and that monsters will hunt you down at every turn. As players explore the world deeper and deeper, they will discover more deadly enemies.

Players simply use a few simple tools to start the game and then fend for themselves in the world. Players must chop down trees, mine precious ores and collect loot from treasure chests to become stronger. As the player progresses and fights bosses, the player can acquire better gear. Terraria has about 10 main bosses for players to fight. All of these will provide players with important tools and materials to continue leveling up.

Terraria, despite its 16-bit look, is probably the most beautiful graphics you'll ever see in this style. It's pretty hard to make a 2d pixel style game that looks good. Terraria uses wonderful vibrant colors and backgrounds to make a beautiful game that truly stands out in its class. Its animations are also pretty good. Everything feels fluid and elegant. The movement and fluidity of the monsters in the game, from the player's movements to the sword's swing, is excellent. This is even more evident when it comes to in-game magic. Terraria found the perfect balance. The look and feel of the game's spells is powerful and responsive, but that doesn't overwhelm the player's vision.

Terraria works well. It always has a smooth frame rate, even when there is a lot of action on the screen during boss fights. Even in handheld mode on small screens, players will find they can keep up. It initially takes a minute or two to load the game, but once the player enters the game, the game doesn't load anything anymore. This is great because it helps keep players immersed in the world and focus on their creation.

Terraria is not only a fun adventure exploration game that will keep players hooked, but there's a lot of content you'll want to play repeatedly. Players can play or get all NPCs in different styles of combat. There's a lot of cool stuff in Terraria that I haven't covered, and it's up to the player to explore on their own. Trust me, once players start experimenting with Terraria, it's going to be attractive enough for you. It offers so much content that players can keep playing for hundreds of hours. If you like adventure games, or games where you must fight many bosses to progress, Terraria is the place for you.

First of all, the content setting of this game is very interesting. When you first enter the game, you can see a wizard NPC with a random name walking back and forth, he will tell you a lot of information in the game, but he will not give you any tasks, such as collecting a few farms such as wood task, he will only give you one suggestion after another. In a separate tutorial, you can learn some basic operations and knowledge, but the tutorial also doesn't tell you what goals and tasks you will have. re-logic wants to give players more choices, but when faced with a huge sandbox map, players cannot accept a large number of settings in a short period. If there is no guidance, players will be at a loss. What players need is not complete freedom, they need guidance, otherwise, they will be confused, re-logic expresses their desire to guide players with guide NPCs, they hope to guide players to discover new content in various ways, and The method of guidance is not the traditional variety of tasks, and relies on appropriate prompts and reasonable settings.

Second, this game will allow players to choose their own goals through game settings. When entering Terraria for the first time, I believe that many players will walk around to observe the world constructed by this game. This is a short-term exploration in the early stage. At this stage, players should not be given too much information. The right amount of information can attract and guide players. When the player makes a workbench under the prompts of the initial exploration and collection and the guide, the player can find that many items are waiting for him to explore the mobile phone, and the desire to collect and explore becomes stronger, which is then transformed into the player's game motivation. There are no tasks in this process. Players feel that they have discovered these new contents independently, and their pride can also be converted into game motivation. This naturally allows players to continue playing. The entire game process is guided, and re-logic also sets goals for the players. It does not use the form of tasks and does not write them out. Instead, players can set their own goals through setting. Do players want to collect more items? Adventure underground. Do players want to craft more items? Craft various item crafting equipment. Players know that building qualified houses can get new NPCs under the guidance of the wizard, and players will collect various materials to build houses. The wizard will prompt the existence of the boss, and the player will collect the props to summon the boss, meet the conditions for the boss to appear, and prepare the battle items. The player knows more information under the guidance of the guide, and this information gives the player a goal, and the player can choose freely, and at the same time, his freedom is limited. Players will not be able to obtain a large number of shadow mines without killing the eyeballs. If they do not kill the world eater, they will not be able to make perfect use of the shadow mines and to kill the world eater, they need to use bombs to blow up the corrupted stone that requires at least the shadow draft to dig up, and then smash the shadow. Ball, which requires exploration to collect bombs or obtain NPC, players can get guns and NPC when smashing shadow balls, bring goblin army, meteorite and world eater, and then need to save strength to enter the dungeon, and then go to hell.

More importantly, in the whole game process, players can acquire goals naturally and unconsciously, and the goals are related to each other, forming a coherent game experience. re-logic is very smart, it does not use various farm tasks that bore players, and uses the game's settings to interlock with each other, leading to one content after another, and making players feel that they have discovered it by themselves, and gain a sense of pride. Many sandbox game creative games fail. Sometimes it's not that they are not good enough or creative enough, but that the goals are too vague and the players feel confused. Re-logic does not use tasks in the sandbox world and allows players to complete the goal step by step, which is a bold design. Players who want better building materials and better equipment cannot ignore the boss's advice from the guide. The success of re-logic in guiding the game process stems from the successful use of players' curiosity and various desires. The difference between the game and the reality is that in the game if you do as required, you will get a reward, and the system will not corrupt or default, that is, the player will be rewarded for their behavior. Return is not everything, but no return is impossible. Players continue to explore and fight, obtain rewards one after another, and improve their technology. Next, they must design content so that the rewards obtained by players can be useful, otherwise designing so many rewards will only make people boring.

However, more difficult environments and monsters are designed in this game, which is too difficult for many players to persist. The difficulty curve of the game is determined by the player's progress in the game. With the player's free exploration, players can discover the more difficult parts of the game by themselves. Usually, the difficulty is generally increased as the task progresses, but Terraria's method is that in various environments of the game, players can feel the difference in the exploration, and then freely choose to explore. According to the difficulty of the environment, players can find places that can be challenged according to their current equipment and technical level. In this way, the rewards given by the game can be freely chosen by the players. and use. Players are stimulated to obtain rewards, and in the next environment, they can use the current rewards and technical improvements to obtain new rewards. This is a cycle of the game fun, and the overall difficulty is relatively high.

To sum up, the design of this game is very unique, and it is more suitable for players who like sandbox games. This game uses tasks to improve the player's equipment level and technical level step by step while increasing the difficulty, to control the difficulty curve. Terraria uses the form of a sandbox to allow players to choose the difficulty independently by using the difficulty and reward differences of different content of the game, which virtually constitutes a difficulty curve from easy to difficult.