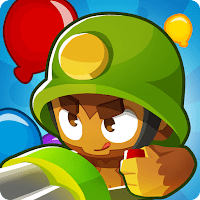 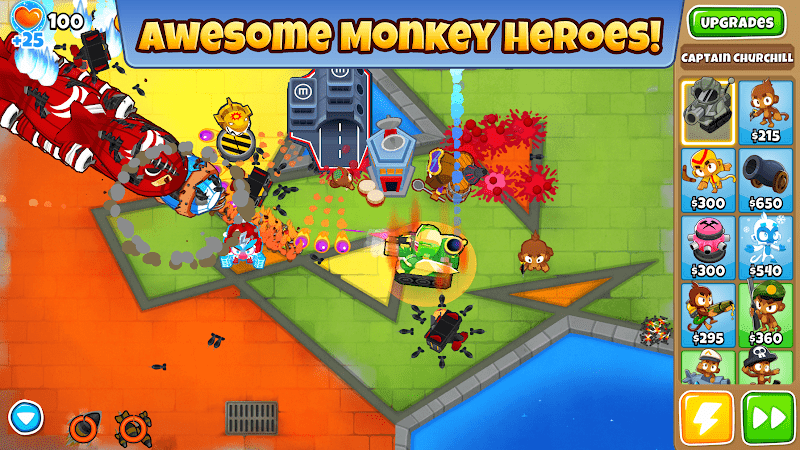 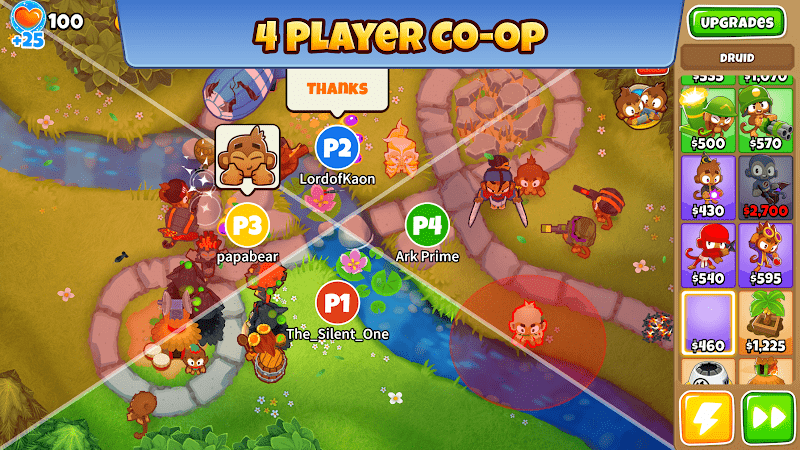 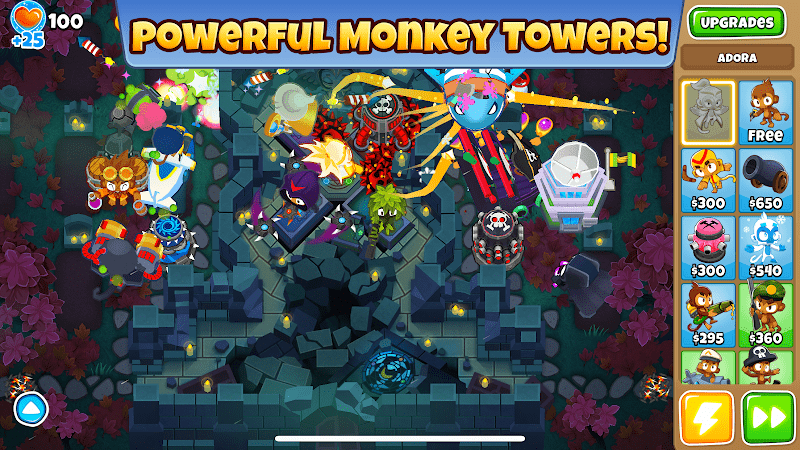 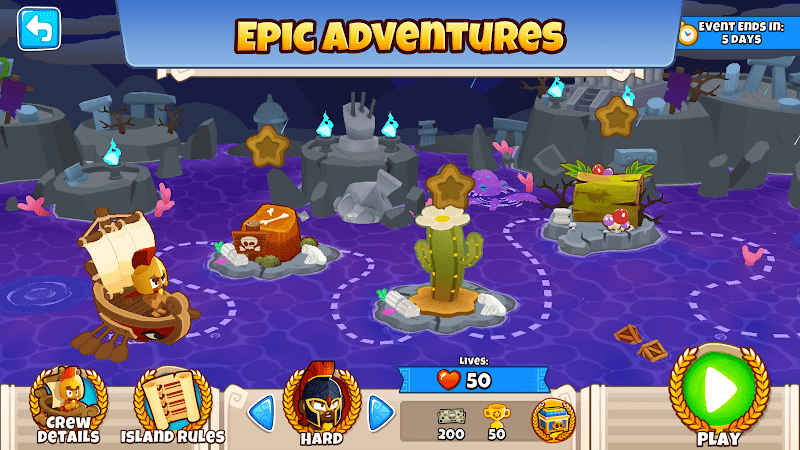 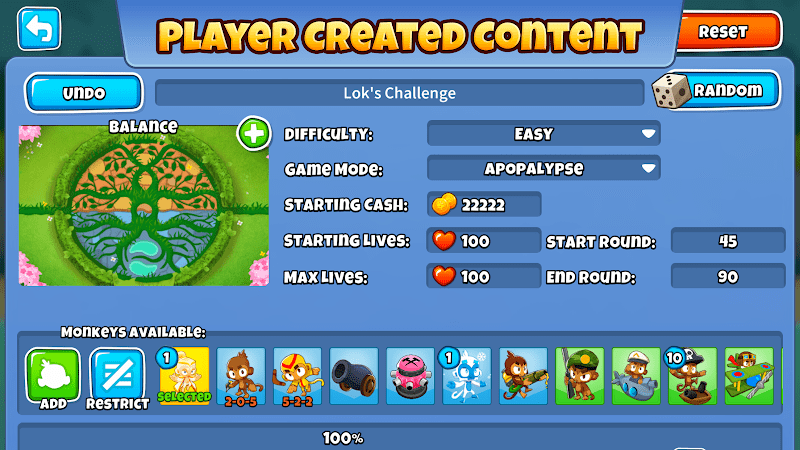 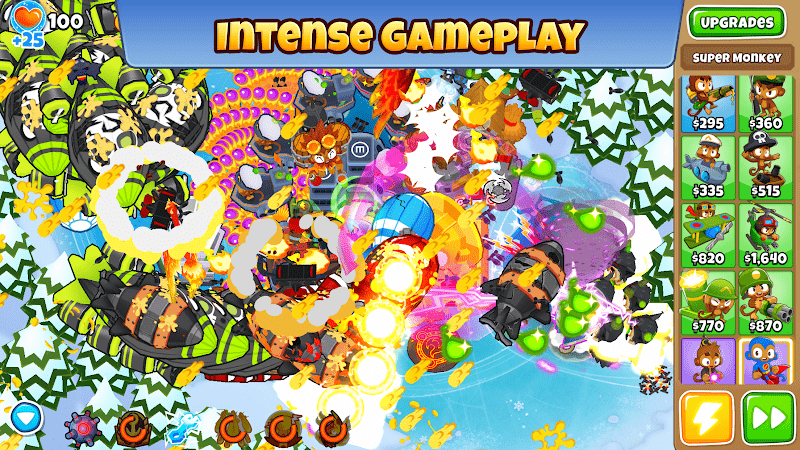 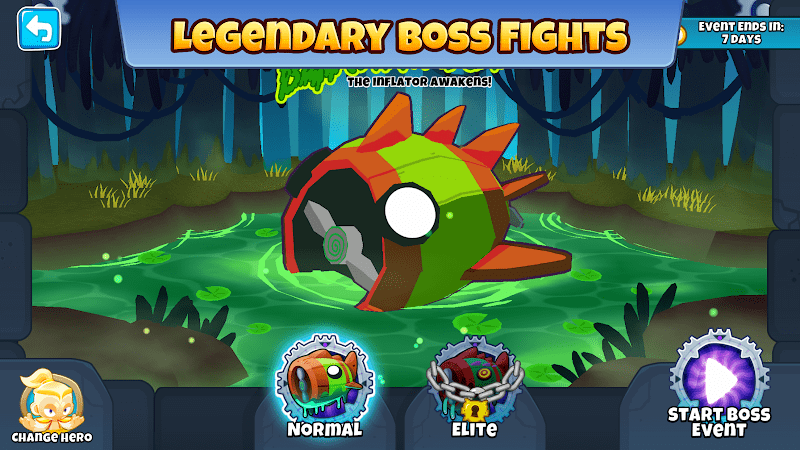 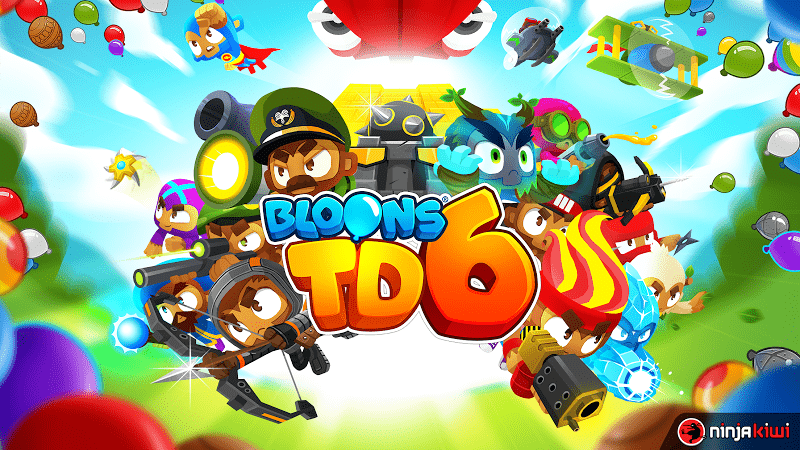 Bloons TD6 is a strategy game available on app stores. Its diverse variety of monkey towers and heroes gives players a chance to customize their characters and the game as a whole. There are 22 types of monkey towers and 13 kinds of heroes available, and every monkey tower has 3 ways to upgrade. The game support 4 players at the same time. Players can unlock many cosmetic elements by winning trophies during the gameplay. Battles of the game have their respective maps. Players can play the game anywhere, even when they are offline. There are altogether 56 customized maps with different levels of challenges. Boons TD 6 keeps constant updates and the developers of the game are quite responsive, responding to players' feedback in an instant way. Bloons TD 6 doesn’t involve any real money in terms of the in-game item purchases. Also, you can cancel the function of in-app purchases if you would like to.

Bloons TD 6 is a good game receiving many positive comments on various platforms. As for the reason why it must have something to do with the following several points. First of all, it has an eye-catching interface and its 3D graphics are really pleasing to players’ eyes. Secondly, it offers players a multitude of choices, ensuring a great extent of freedom for players to customize their games. Thirdly, the game mode involving 2-4 players in a round is very interesting and can make players socialize themselves while playing an online or offline game. Fourthly, the price of the game is reasonable. Players can buy 8 skins for 10 dollars. Moreover, its developers are very diligent and keep updating the game now and then, which offers players up-to-date gameplay experiences. Lastly, the game doesn’t require an internet connection for players to play y with. Players can still enjoy the game even in its offline mode.

However, just like every coin has two sides, Bloons TD 6 also receives negative comments from the other small group of players. To begin with, some players complain that the game keeps almost daily updates, which makes the loading of the game quite time-consuming every time they open the game. Also, some players say that the game is very buggy and has many glitches. For example, if you play the game offline and can not update the game due to the loss of internet connection, the game will refuse to let you play the game, which is quite paradoxical regarding the claim of the game—it can be played offline. The connection is dropped now and then even if you play the game online. Furthermore, the game is criticized as a monetization game. Players need to spend quite a lot of money in order to play the game well.

In a word, Bloons TD 6 is a well-recognized game among players. It wins many players' recognition for its customization function, the excellent design of 3D graphics, multiple-players gameplay mode, and reasonable offering of price. But, players should still be cautious before deciding to download and install the game, because the game is also criticized for being too buggy and profit-driven. Its controversial offline mode function is also disappointing. Lastly, though being very active in updating its versions frequently, it also causes some problems for players due to the consumption of time to load the updated game version and unexpected glitches after the updates. Thus, think about it carefully before you play the game. Anyway, it is generally an enjoyable and excellent game. So if you are interested and you have time and money, you can have a try.

Bloons TD 6 is a 3D tower defense game. First of all, the picture and style of this game are very delicate and delicate, and the content of the game is also very rich. First of all, because it is a 3D effect, it is very refreshing. It is said that there are 30 brand-new maps in the play, as well as many 3D objects that block the line of sight, all of which are very three-dimensional and vivid. Various monkeys and various types of skin are also very fine. There are different heroes in the game, and these heroes have different stunts. In fact, the highly skilled monkey has over 20 signature upgrades. In addition, each hero has two balloon-busting skills, and players need to develop new game strategies based on each hero's abilities and synergies. Therefore, for players, this game requires strong thinking ability, constantly trying and changing their strategies, so as to achieve upgrades. I think this game trains the player's IQ very much because the player needs to use each hero and monkey according to the characteristics of the balloon and let them beat the balloon. The maps in the game are very attractive. The gameplay of different maps is also different. According to different maps, players can achieve higher free game rounds. There are also many new balloons in the game. These new balloons are different in appearance, such as purple balloons, wall painting balloons, and murderous nitrogen balloons. Of course, then adding a variety of new balloons that are difficult to deal with increases the challenge of the game, and these new parts also encourage players to challenge themselves.

In addition, I think the very good thing about this game is that it is a single-player offline game. That is to say, players can start the game anytime, anywhere, without WiFi and traffic. Because of the current environment, many times we have no way to use data or WiFi, so we can play this game to pass the time, for example, when waiting for the bus at the bus station, or when queuing for shopping, we all This game can be started. Each game of this game is not very long, so we can start at any time, which brings a lot of convenience to players. The difficulty of each game has increased, and the new game modes have become more abundant, such as some monkeys that will be restricted, MOABs with double health, very cruel rules, etc. These game modes Give players more choices.

However, this game also has its shortcomings. I think the biggest disadvantage of this game is that it is difficult for players to immerse in it, and it is also difficult for players to continue to play the game. , because although there are many types of upgrade routes for towers in this game, the similarity of game content is also very large. A lot of people say that the sun god mechanic is very interesting, but when the black sun hits, they don't want to play anymore because it will discourage players. So I think the uniqueness of this game is still relatively weak, players are easily bored, and some players even play this game while doing their homework. Because this game does not require too much energy, players can stop at any time, and there is not much urgency and pressure.

Overall, this game is a very good tower defense game. The 3D effect of the game is also very good, the content is also very rich, the design of the tower and the effect of attacking the tower are also very fulfilling. But if you reach a certain level, for example, when you reach level 70, you may have to spend money to buy some tools such as modifiers, otherwise, it will be difficult to continue to upgrade. So overall, this game is very good, and it is said that this game is still being updated continuously, and new gameplays are constantly being added. Overall, it's a great tool to pass the time.

it's a cool Game.