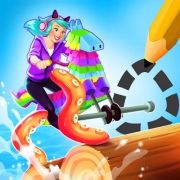 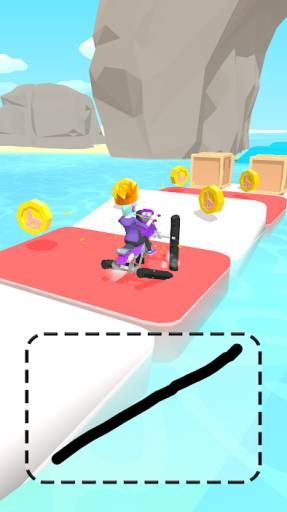 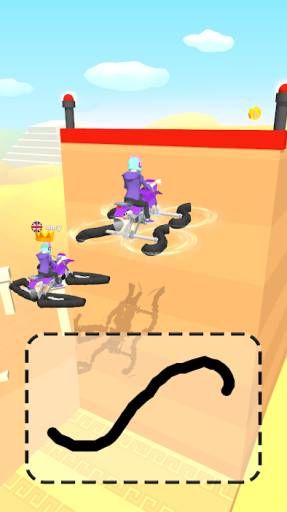 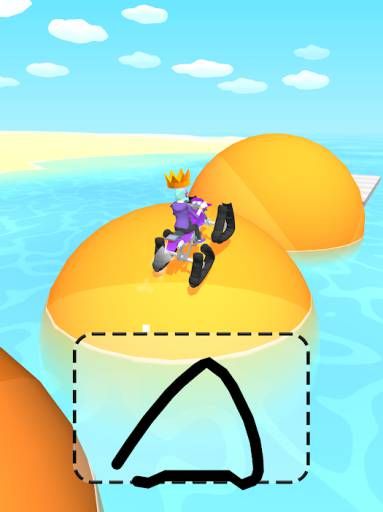 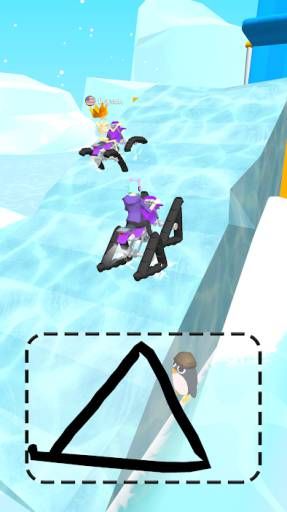 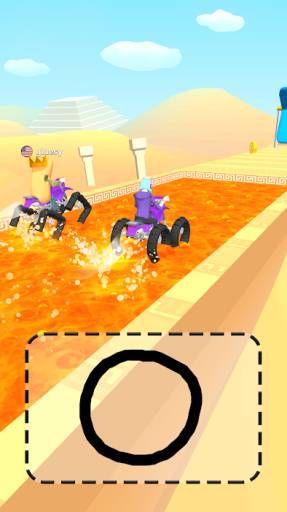 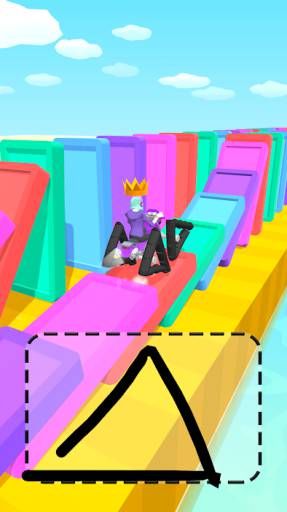 Scribble Rider is a casual game developed by Voodoo combining multiple gaming elements of speed racing, strategy making and puzzle solving. Available from 2020 on iOS, Android and webpage, this game incorporates the regular features of Voodoo casual games with its unique touch of creativity. The gameplay takes the general form of a race game where players are given a vehicle (a quad motorcycle) and ride it to overtake other competitors and reach the finish line first. However, unlike other regular racers, Scribble Rider does not assign players with pre-made vehicle modules, instead, it gives players a ‘wheel-less’ motorcycle and allows them to design their own tires in cope with each level of racing.  The gameplay is rather simple: players can doodle the tires in a designated area on the screen and the vehicle will be equipped with the customized wires to roll on each specific landscape and terrain with various speed and fraction levels. This is currently a single player game where you compete with another automatic player as your rivalry.

Although the game is won by reaching the finish line first with the fastest speed, players cannot gain the speed automatically via choosing better vehicles as they would in other car-race games. In Scribble Rider, the speed of your motorcycle is all depended on your instant real-time judgement and tire-design of the current specific terrain and land structure, which keeps changing from level to level. As you start, the road condition is less complicated and it’s rather easy to draw simpler wheels to get through the challenges. However, as players ride further into the landscape, the roads get increasingly bumpy and tough with unpredictable puzzles and obstacles, where players need to resort to their whim of creativity and outside the box thinking. Its most prominent feature is that players can fully exert their unlimited imagination beyond the conventional knowledge of tire shapes, which can be anything they draw in this game.  Therefore, it wouldn’t be surprising to see spiral, sharp-angled or even indescribably messy ‘wheels’ as long as you believe that very design works best for your challenge. Besides, players can also occasionally pick up boosters and other serendipities along their rides; in some parts of the map, they even need to come up with wheel designs that allow their vehicles to dive into the water or fly above the ground. If you are very ambitious about this creativity-intensive game, you can also play on the tailored mode where you can customize the road conditions and landscape layouts in the workshop and challenge yourself with your infinite creativity. Apart from those special game features, Scribble Ridder is also one of the recent Voodoo productions with easy one-button control mechanism and nice smooth animated graphics.

The most attractive element of this game is obviously its total freedom of wheel-design, which makes this game more than a brainless speed game, but rather a strategy-based racer. At the same time, as a casual game, the gaming pace is relaxing and not intensively frustrating. Players can get a right amount of excitement on both speed control and creativity. The diversified content of road terrains and map levels well entertain players with good amount of entertainment.

At the same time, this is could have been even more amazing if more effort was put into it.  Some players complain that the game only allows single player mode, and it could be more fun and interactive if multi-players is available. Beside, this game could be more tasteful if the developer enriches it with better audio-visual effects. Last but not least, parents shall watch out that the game has an age limit of 12 and it is rather an addictive game for players lacking self-control.

Overall, Scribble Rider is definitely worth downloading and playing, especially for those who want to try a racing game in a different style and mechanism. It absolutely encourages you to be creative and develop your problem-solving skills in a fun and relaxing way.

Scribble Rider is a game that features traits of various types of games, such as car racing games, hands-on games, skill games, puzzle games, strategy games, etc. Therefore, it can not be summarized simply by a single word. In this game, players will draw a circle of tires for their cars at the bottom of the screen before starting the competition with other players in every round. The game is controlled by AI, and you need to try your best to draw an appropriate shape circle to generate wheels for your vehicle. If you become the first to reach the goal, you will be awarded coins. Players will not only play the game on ordinary racing courses but also on a variety of courses featuring dominos, ice, beach, etc. You will experience all kinds of scenarios in each round of the gameplay. The game currently has 435,822 reviews with 3.9 stars out of 5 on Google Play. It contains in-game ads and purchases. So what about its pros and cons? The following part will direct our attention to these aspects of the game.

The game is quite popular among players due to those reasons. First of all, the mechanics of the game is quite simple for players to understand. All players need to do is to draw a circle for the wheels of the car in order to drive the car faster and reach the final goal. Secondly, players can customize their cars in accordance with different kinds of situations, including scenarios in which players need to swim or fly. Moreover, there are a great number of levels for players to challenge, each featuring different scenarios, making the game fun and attractive. Furthermore, players can invite their friends to compete with them. Last but not the least, players are allowed to customize the course as well.

However, despite its great popularity among players, the game still meets some criticism from some players out of certain reasons. For instance, the game contains too many ads, which makes the game quite unplayable since the ads disturb the gameplay experience of players all the time. Next, it actually doesn’t make a lot of sense no matter what kind of circle you draw since it doesn’t make a lot of difference in terms of the performance of the car. Also, though it seems like you are playing with other players in the game, it is not multi-play at all, and your opponent is actually supported by AI. Lastly, the game gets quite repetitive as the progresses of the gameplay. Therefore, players might easily get bored of it.

Overall, Scribble Rider is an innovative game with a great idea of drawing circles to make wheels for cars. The game is easy to understand and master, and there are a variety of courses available for players to challenge. Players can also customize the courses according to their own likes. There are tons of levels available for players, each with interestingly designed courses. Players can invite their friends to play with them as well.  However, players might also be unsure about the meaning of drawing circles since in some cases, even if you draw a similar circle as your opponents, you might still fail. Also, the amount of ads has reached the point of driving players crazy. The game is recommended to those who have plenty of time to kill and those who have a good sense of self-control. Parents should be aware of the in-app purchase feature of the game and warn children of the possible outcome if they misuse the game and spend too much money on it.