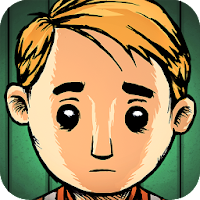 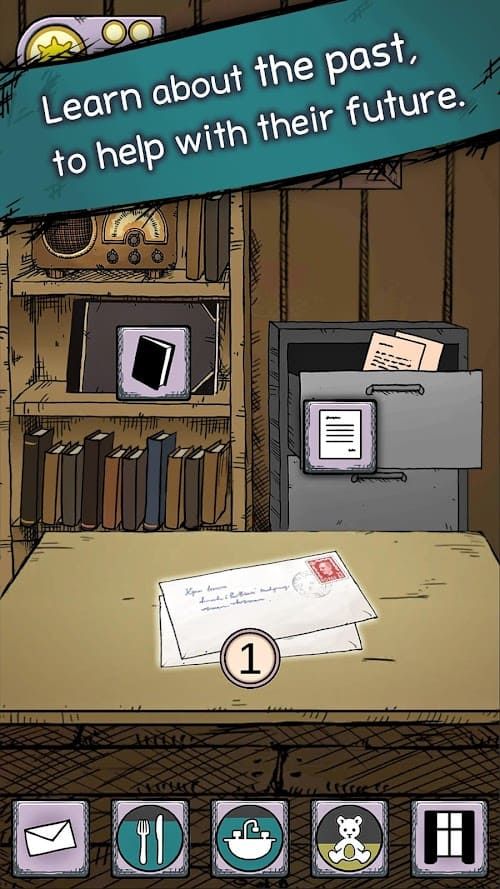 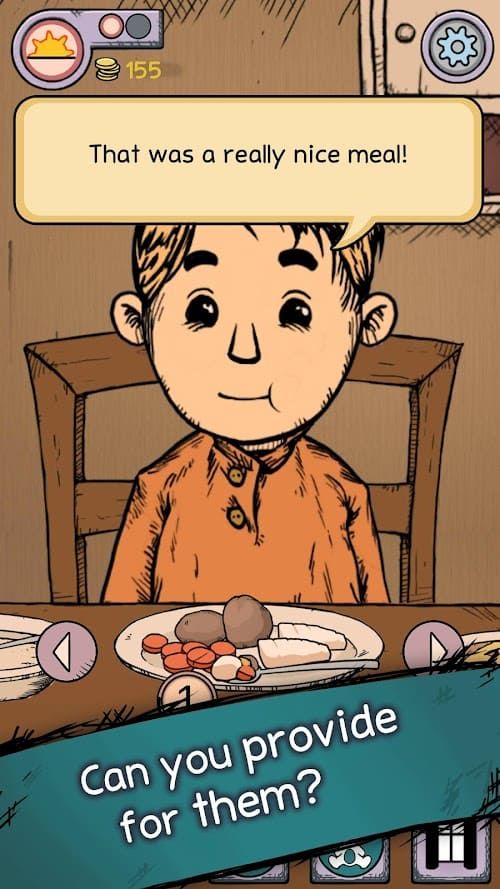 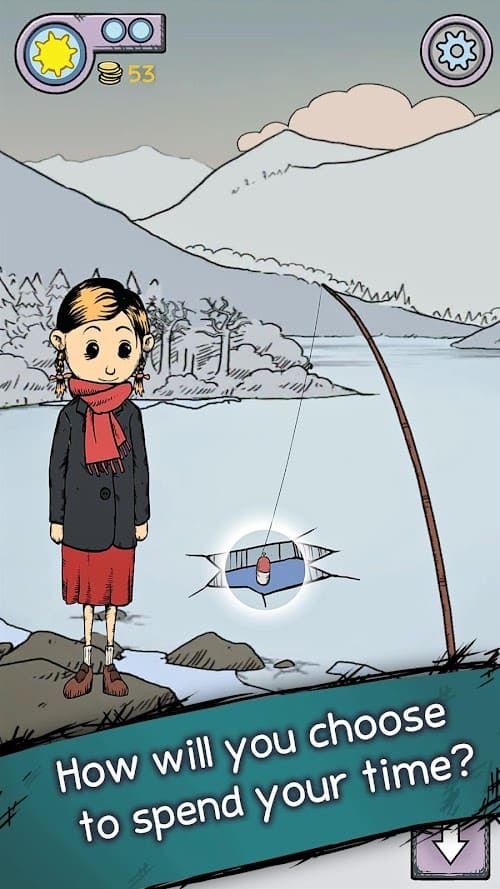 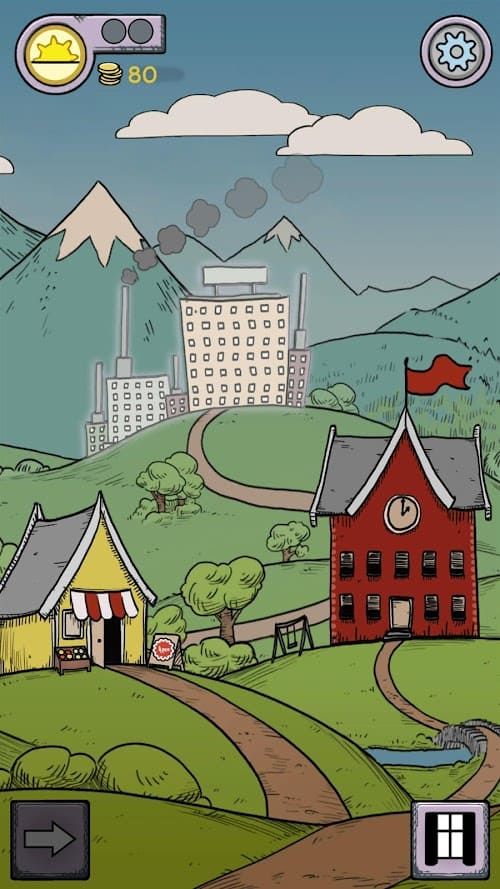 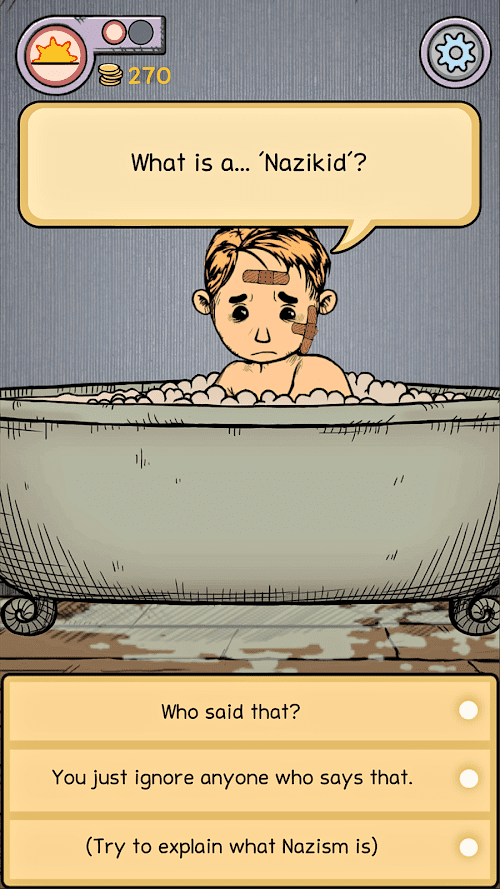 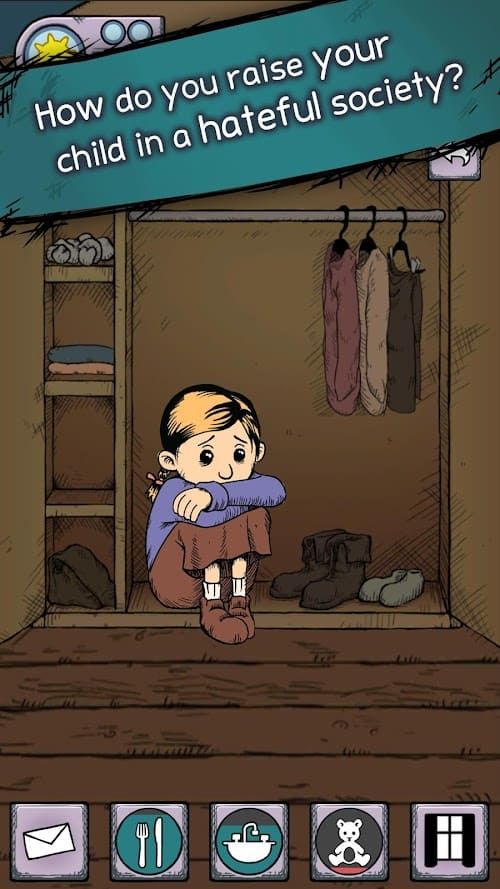 My Child Lebensborn was released by a Norwegian developer -- Sarepta Studio in 2018, intentionally on the exact same day (8th May) when the second world war concluded in Europe. It can be acquired via Android, iOS and Steam. The game is a heavily story-based and role-play nurture game where the tale unfolds in a unique setting—post-WWII Norway that is just breaking free from the occupation of Nazi Germany, whose atrocities and wrongdoings severely traumatized and radicalized its victimized society and its members. Amid complicated social sentiments of strong anti-fascism, German hostility, and PTSD of the war,  there is a silent and less-talked about group in the society: the so-called ‘Nazi-kids’, namely children/orphans who have German heritage during the wartime and were left behind in the enemy(victim) society when the war ended. This game is inspired by genuine stories and historic events—‘the Lebensborn children.’  Players are given two choices to start the game: they can adopt either an innocent German girl (Karin) or a boy (Klaus). Their main role is to parent the child of their wartime enemy in various way of communication, interaction and decision-making. Since the child has a unique social identity during a hypersensitive time in history, the story is filled with nuanced and complex sentiments and emotions that would trigger your contemplation and reflection from time to time during your gameplay.

The most outstanding feature of the game is the narrative style of storytelling. Players are fully immersed in the post-war social atmosphere where all sorts of emotions—joy of victory, pain for the lost loved ones, trauma of the holocaust, hatred towards the enemies, reflection on the war—mingled together. This complexity makes the discourse multi-layered instead of a conventional good-evil dichotomy. Raising a child of someone you and your society hate provides a special perspective for average people to review the history they’re familiar with yet do not necessarily fully understand.  In the gameplay, players (parents) have to constantly confront with a disturbing and heartbroken reality that splits their psyche apart. Seeing the child being abused and victimized by their own ostensibly righteous social members, parents have to find an emotional and rational balance to stay sane and fulfill their childrearing duties. The most common interaction between the character and the play is to answer questions, which are usually gripping and cruel to provide a simple answer. In doing so, players are allowed to give different responses that lead the storyline to different directions. Besides, players’ decision-making would also notably play an unneglectable role in character’s reactions and personal growth in nuanced ways. By answering character-building hard questions, players are shaping the children’s worldview and personal development. Apart from such spiritual and psychological challenges, players also need to manage other daily life related issues in a post-war society where material life is scarce and shortage is normal. Parents in this game are just like parents in reality who have to strike a work-family balance so that they have enough materials to support the family while also spend enough quality time with their mentally dependent children. Therefore, playing this game takes players to another reality where they experience something ‘real’ yet unfamiliar, as well as something they are familiar with in their own day-to-day life.

This game definitely provides a meaningful angle for those who are open to different narratives on a rather hegemonic history discourse. It is provocative in arousing your empathy and reflection through its engaging storytelling, which not only encourages you to play, but also can somehow be educational in its own way. Plus, the game is currently available in many languages such as English, Spanish, Russian, Indonesian and so on. The graphics of the game is well-made with its own unique taste.

Mostly the game receives great feedback and it influences many players in their own personal growth. However, it should be noted that this game does set an age limit of 12 (13 in Germany) since it may contain some if not none suggestive and abusive contents that are too harsh for young children to process. Therefore, parents should keep an eye on those things and offer adequate mental support when their kids are exposed to the gameplay. There might also be some payment issues when you try its free Lite version and decide to make a purchase; other than that, users might occasionally find problems when downloading a different language.

That being said, I think the minor issues of the game are totally overshadowed by its unique story and thought-provoking content. It is definitely beyond an entertaining level of gameplay, instead, it offers a different perspective, a personality-building opportunity for those who dive into the world of the game and come out with something meaningful.

This game is a classic development game. I especially like this game because I find it especially healing. When I first started playing the game, the interface reminded me that some of the money players paid for buying the game would be donated to the War Children Project. The Children of War Project is a program dedicated to better protection for children born in war. The game will also give a web link, we can access the specific content of this project, so I think this game is very user-friendly.

First, the game is set in 1948, after the end of World War II. During the year, as an ordinary Norwegian citizen, you adopted a child named Karin. This child is a German child born in the Nazis' Fountain of Life project. It is said that the game is based on real events, and after World War II, many children were treated like Carlin. Nazi Germany established a government agency in 1935 based on the theory of racial eugenics. This agency is ostensibly designed to ensure the nation's health standards and protect the nation's mothers and babies. But in reality, they would look for unmarried women in Nazi Germany or neighboring countries, let these women have children with German officers, and put these children up for adoption by other parents. At the same time, to allow women to have twins or multiple births, the Nazis conducted experiments with Jews and Eastern Europeans in Auschwitz in Poland. It is said that more than 1,300 pairs of twins were born in this experiment.

The setting of this game is very attractive and cruel, and it evokes our empathy and makes us wonder what the child is going through. So in this game, players have to contract Karin's simple things like breakfast, dinner, bathing, sleeping, etc. At the same time, players also have to go to work in the factory to cover the expenses of the entire family. On weekends or vacations, players can go fishing, play games, etc. with Kalin outside of work. Every time Kalin came home in the evening, he was covered in ashes, and sometimes he was not very obedient. So this game is very close to reality, let us immerse in the game very quickly. In the game, you need to protect the safety of this child in the harsh environment after the war. Although this is only a seven or eight-year-old child, if the German label is attached, everyone will think that he is guilty. . Therefore, Kalin, the protagonist of the game, was the target of bullying by school teachers and other children since childhood. Many people called him a Nazi brat, a bastard, etc., and some even beat him. Teachers at the school would scold Karin for cheating or violence when he was studying hard, and students would isolate Karin in groups and even beat him. Kalin's grandparents were also very unfriendly when they visited Kalin, and they even cursed Kalin. Carlin's father, a German military officer, had remarried, and he didn't want to have too much involvement with him, and his mother didn't want to hear from him again. So Carlin is tragic. In such a tragic encounter, we are very sympathetic to Carlin, and we are also furious with those bad people. We even hope to beat every malicious person and use our fists to make him recognize the truth. . It's a pity that the game doesn't give players many options because we don't have a way to choose the option of beating others. Of course, there are also a few good people in the game, such as Karin's school teacher Bird, he will stop other children from bullying Karin, and will help Karin in learning, he will also praise him and encourage him He even protected him personally.

But this game is very depressing, because the background story of the game is too tragic, and players have very limited choices. Many players want to work hard to nurture their children and approach everything with a positive, optimistic, and open attitude. But the background of the game is not the modern social atmosphere, and it is different from the style of most of Europe in our impression. This is the social atmosphere after the Second War. Victims often turn to abusers, and there are many things in this period. In this environment, gamers and children can only comfort each other. Until the end, the ending of this game did not give players a good consolation, because the ending was very tragic, and many players said it was unbearable. In our opinion, with such a well-behaved child and such a kind parent, we should have had a happy ending, but we didn't.

In general, I think this game is very suitable for those who have independent thinking, the ability of judgment and strong heart, but not for those who are weak in heart, because in this game, we will encounter many tragic things, we must It takes a strong heart to overcome this tragic emotion.