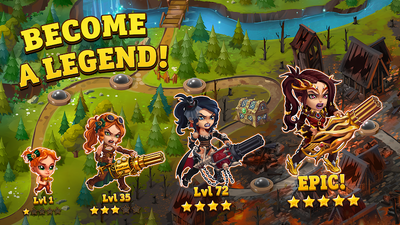 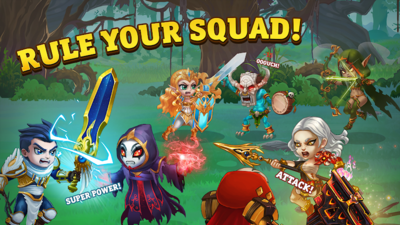 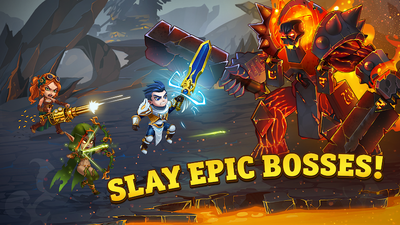 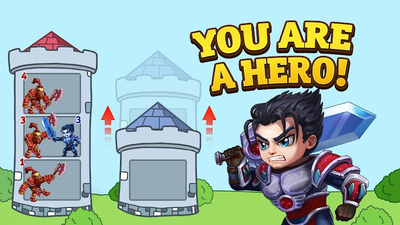 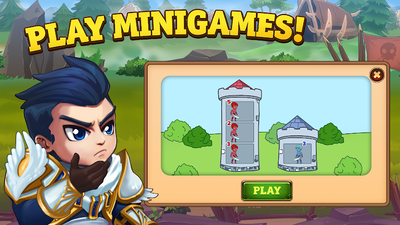 Hero Wars–Fantasy Battles is a Q version 2D fantasy-style RPG page game. In the game, players explore the world of heroes, gather heroes from different regions and races with their specialties, fight against evil forces, and save your kingdom. This game is a role-playing game, its operating platform is Facebook Gameroom, and the game language is English

The combat system of this game is very perfect, mainly automatic basic attack and a manual big move. The game begins by giving players a character named Galahad, a grinning giant with a big sword in hand, and follows the game's novice guide into battle. The battle mode of "Hero Wars" reminds me of Dota Legend. It is also an automatic battle setting. What the player has to do is when the game character is full of rage, the player can click on the avatar to zoom in on the move (after the novice will unlock the automatic release). The picture quality cannot be said to be very fine, after all, the 2D cartoon style, but the small special effects during the battle are richer. Especially after players collect more heroes, the battle will be more exciting. Moreover, this game adopts a reasonable hero collection system, which is to collect hero characters by way of fragment collection and random drawing. I believe that many players like this card drawing and collection setting. The collection system in "Hero Wars" is a very common use of Soul stones (soul stones), that is, fragments of livers to extract heroes and diamonds to open boxes to extract heroes.

The main development system of this game is to rely on the game level to upgrade and improve skills, which is relatively complete and has good playability. All heroes have levels, equipment slots, and stars. The levels include skill level, hero level, and team level (player level), which is also a common setting. Team level is superior to hero level and superior to skill level.

Each hero has six pieces of equipment, all of which can be dropped in the dungeon. Collecting a complete set of equipment can summon dragons, you can upgrade the hero, that is, change the color. The promotion of stars depends on the accumulation of Soul Stones, then it can be produced in the dungeon, local tyrants can buy it in the store, or you can pump it. In addition to these basic settings, Hero Wars also has a skin system, the players can change the skin for the hero, the skin will not only change the hero's appearance, but also bring a lot of attribute bonuses, and the skin can be upgraded. The skin fragments are generally only available in Outland (boundary land), and sometimes there are opportunities to obtain them in individual activities. As the player's Team level increases, more modules will be unlocked in the future: Arena (Arena) for PK with other players, Outland (Frontier Land) copy that produces precious skin fragments, Grand Arena, Stone Tower, Guild, and so on. It is very possible to make a few foreign friends even in the game

However, the point worth complaining about this game is the skill level of the game, which is also the first routine in this game. The team and hero levels are obtained by fighting or taking experience potions, but only 10 skill points can be added each time. Like physical strength, you have to wait for recovery. What if you want to have more skill point allocation? Yes, please recharge to become the VIP of this game. Then I will talk about another routine of this game by the way, because the equipment is produced in the copy, it is inseparable from the brush, everyone will think of the function of sweeping. In fact, in this game, Samsung can also sweep after passing the level, which is the Raid in the game. This process consumes players' lots of time and patience.

In general, Hero Wars-Fantasy Battles' combat system, and the details are well handled. For example, when zooming in, you can see the changes in characters' expressions, and the special effects of skills are rich! Due to the many elements that need to be developed in the game, and there is no skipping battle, no X2 acceleration, the rhythm is very slow, and the sweeping function has to spend money to unlock this setting, it can be said that the country has a long way to go! However, players who want to make friends with English-speaking people can try the game out.

Developed by Nexters Global Ltd., Hero Wars - Fantasy Battles is an online mobile role play game in a fantasy setting. This app is free for downloading on iOS and Android platforms with in-app purchases. The game story starts with the occupation of land by the evil Dominion army , and the players must organize their own team of heroes to defend and reclaim the peace of the world. There are multiple ways of defeating Dominions: the most direct one is the face-to-face firepower combat on the battlefield; others methods include completing quests , fulfilling campaign missions and autoplay during offline time etc. The major gameplay though, is centered on the collection and upgrading of heroes. This game is definitely packed with actions, combats and violence as it’s heavily war content-based. The hero-related tasks are first recruitment, then team assembly and training until players can upgrade their heroes and unlock new skills as well as joint a guild. Apart from this major theme, there are certainly a lot more side events and contents players can pay attention to and gain extra rewards. Therefore, this is a complex mobile RPG with rich gaming contents for players to uncover and enjoy.

The gameplay and mechanism take some learning curve for players to get familiar with because the game incorporates quite a lot of things in the app. While players are battling with the villains as their major goal in the game, they also would participate in various events, both regular and time-limited ones, such as the dailies, where they could gain bonuses and random rewards. They’re also given different quests for necessary resources and even bigger prizes depending on the nature and hard level of quests. Some of those rewards can be quite useful in their recruitment of heroes because some of them might straight up be prized heroes that players could enlist in their teams. When it comes to hero collections, they come from different sources. As players get through the missions and quests, they would pick up hero soul stones along the way, which can be used in hero evolution as well; besides, they also receive heroes from rewards mentioned above; plus, heroes can always be acquired through in-game purchase. Players gain as many heroes as they can and the very best ones would be chosen to form a potent hero team, which constantly enrages in those exciting pvp arena battles.

Players can experience a lot of fun storytelling and engaging firepower combats in this packed mobile game. What’s more, they also get to enjoy various side events and mini-games which includes the fun epic puzzles. The game also integrates certain social features and players are able to add and invite a lot of friends and gaming buddies. Admittedly however, some limitations and errors do occur sometimes. For example, some players may encounter loading, crashing and updating issues depending on the devices they use; and the mini games are limited in certain game chapters and there are some inconsistencies between the game contents and the ads promotions.

Overall, this game is worth playing and it incorporates as much fun contents as it possibly could as a RPG designed for smaller screen users. This game is very suitable for those who enjoys both role play as well as the team combats playing mode. The arena battles are epic wars for multiplayers and the characters in the game add a lot of flavor and plot to the general story background. The rhythm of the game is also well-paced, centering on the development of heroes, from recruiting, training to promotion and evolution. Players proceed the game along with the heroes and characters, and they also get to use autoplay mode in those grinding tasks. Therefore, it is definitely a good RPG choice on the go.