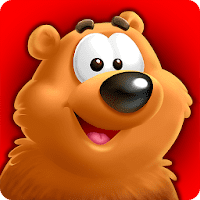 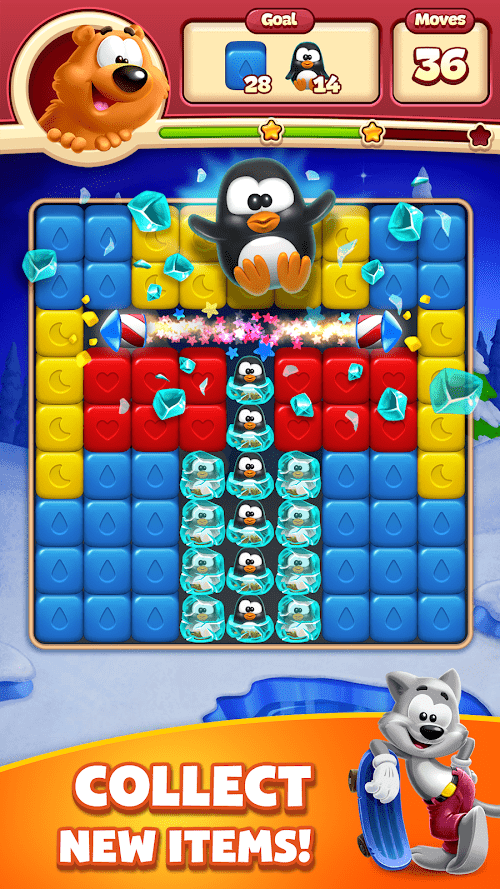 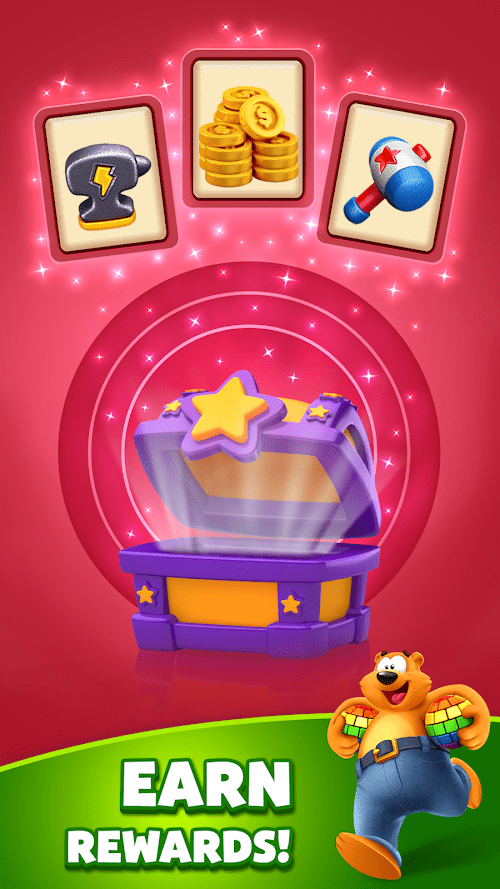 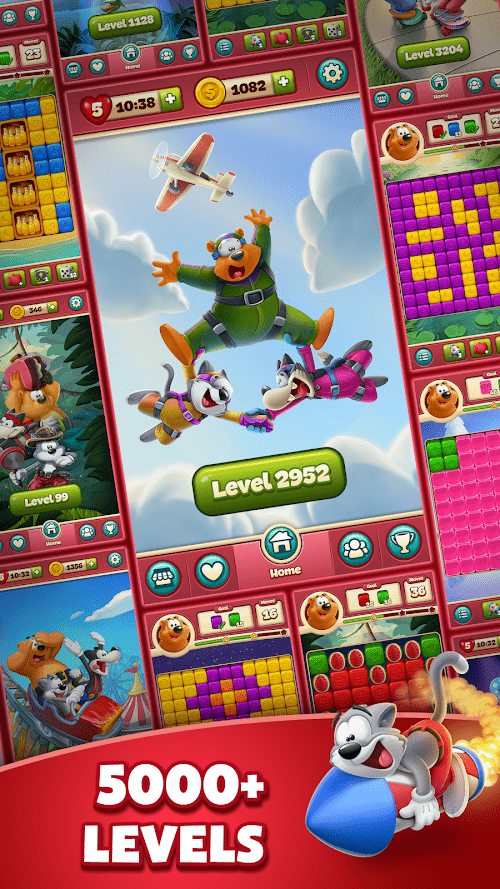 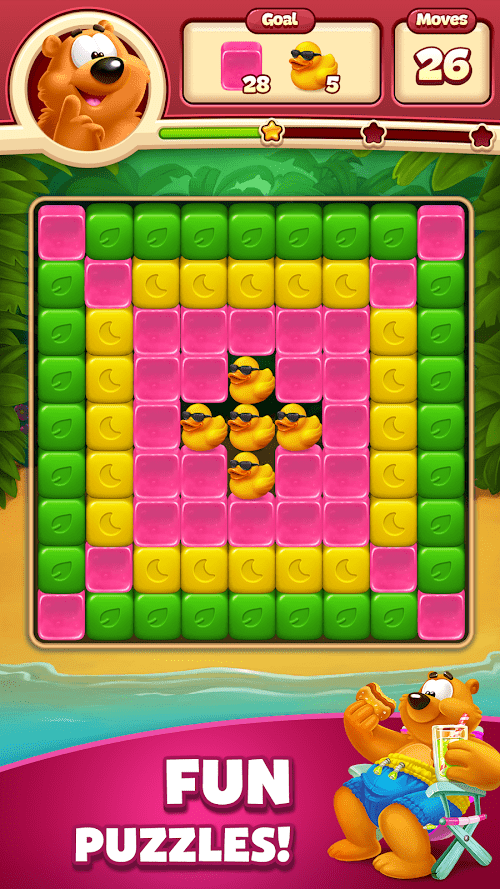 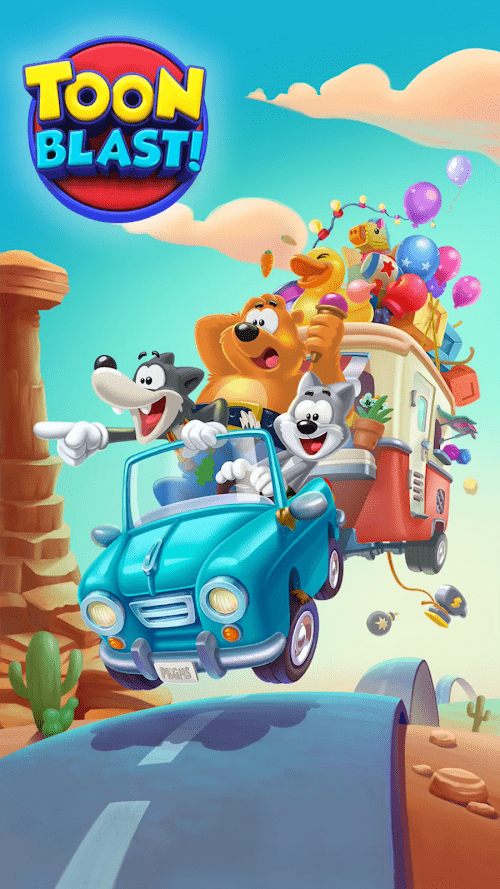 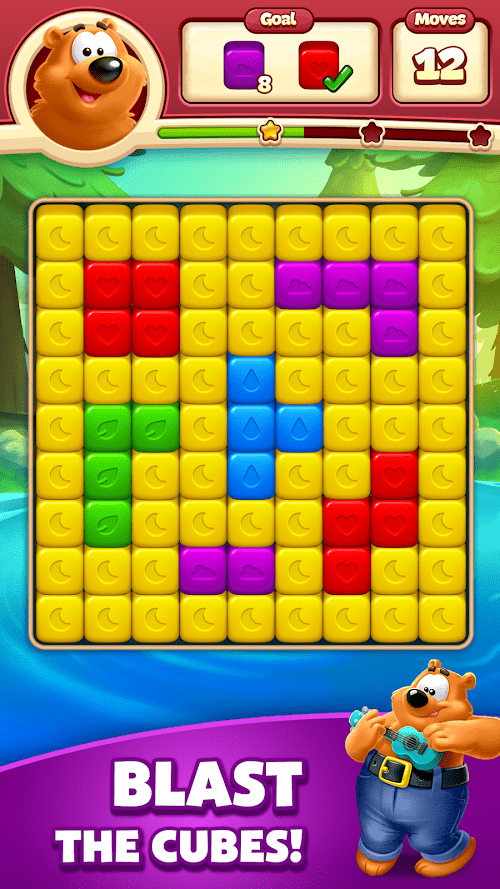 Toon Blast is a puzzle game created by the makers of Toy Blast. It is available in iOS and Android app stores. In the game, you will help cartoon characters go through all kinds of challenges, which makes the game quite fascinating for players. You will match colorful cubes to achieve combos to pass different levels. For example, you might be requested to clear a certain amount of cubes in certain colors within a round of the game, and you might be asked to remove enough cubes for balloons to fall to the bottom. If you achieve to clear several cubes at the same time, you will be rewarded with game tools like disco balls and bombs, which are game boosters helping you quickly remove a large scale of cubes. The number of combos will determine whether you succeed or not. You can meet many players like you in this community, making the game competitive and fun at the same time.

As for the game’s highlights, it can be summarized as the following points. Firstly, it offers players an immersive gaming experience featured with cartoon characters. Secondly, its levels are challenging and its episodes are pretty interesting. Thirdly, there are useful boosters available that could help players pass difficult rounds. Fourthly, in the game, players can find their community to team or compete with. Fifthly, players can sync their gaming experience between their different devices like phones and tablets. Finally, it has issued 50 new levels with new episodes of Galaxy Mission.

To comment on its pros and cons. On the one hand, the game has multiple pros. To begin with, it is a game interesting to play. It features player-involving episodes of adventures by cartoon characters, which make players engage in the game in an immersive way. Moreover, it has a player-friendly and good-looking Interface. The game interface is easy to understand and operate. Moreover, the colorful designs of the cartoon characters, cubes, boards, and other tools are pleasing for players’ eyes. In addition, players can find an interactive community and supportive team in the game. By joining the game, players can interact with other players in the community, form their teams, and compete with other teams. Lastly, it provides players with a smooth gaming experience without interruption. Unlike other puzzle games, Toon Blast does not force players to watch ads and they can directly skip the ads.

However, on the other hand, the game is also criticized for its cons. The addictive attribute of the game can cause a negative effect on players. Because it is a very interesting and challenging game, players with weak self-control might spend too much time on the game. Also, it might result in a costive gaming experience. The random set of extremely challenging rounds will need players to spend money in order to continue to the next level. Furthermore, players might come across inappropriate content in the game. Since players can interact and chat with others in the game, there is a possibility of seeing inappropriate speeches, which can’t be displayed to children. Finally, the existence of random characters during the game is quite confusing. During the gameplay, some unknown cartoon characters will pop up now and then, making players wonder who on earth they are.

In sum, the puzzle matching game provides players with fun and challenging game experiences without forcing them to watch ads in different rounds. The degree of difficulty will increase during the progress of the player’s level. At the initial stage, players only need to take limited steps to clear a required amount of cubes. With the upgrading of their level, they will be required to remove a specific amount of other elements like balloons and bubbles. Now and then, they will be rewarded with tools functioning as boosters like a hammer so they can progress faster. It is a great design because it can keep players entertained. The community of players are friendly and competitive. You can either collaborate with or compete against others during the game. Despite its random cartoon characters, addictive attributes, costive experience, and potential of inappropriate content, we have to admit that Toon Blast is a great game worth your time to have a try.

Developed by Peak, the same developer of Toy Blast, Too Blast is a free to play casual puzzler, available on iOS and Android platforms. It is based on a conventionally familiar gameplay rule where players need to combine and tap at least two or more cubes of the same color on the interface to create a blast so they get closer to their target goals in each challenge level. At the same time, it also integrates a fun story plot into the gameplay where a Toon gang made of three cute characters(a cat, wolf and bear) is waiting for your friendly assistance in their wild adventure. By solving puzzles on each level, you are helping those characters on their journey. The game rule is quite simple. At the beginning of the game, players will be given five lives which would be deducted one by one whenever they fail to pass a level challenge; however the lives will be renewed automatically in every 30 minutes; or they can be obtained from teammates on request. Players can not only touch the basic cube combinations and trigger a standard blast, they can also create special items gained from events, rewards or purchase; and even create further combos from special items which would significantly boost players blast and cube elimination power and achieve their goals even faster. However, it must be noted that only a limited number of moves are allowed in each level to reach the goals of leveling up. In other words, running out of moves before completing the goal means a live deduction for players.

What makes this puzzle game different from others alike in this saturated gaming genre is that Toon Blast is social interaction leaning, instead of merely focusing on its single-player features. That is to say, players are offered two type of playing modes with their corresponding events and features. As a single player, there are multiple rewards-binding events to participate, such as the Crown Rush awarding boosters; daily challenge of combos with free coins rewards etc. Meanwhile, if players play on a team event, then they will be participate in a number of one v.s many or team v.s. team competitions, such as team tournament, where they and their teammates would be rewarded with stars or big prizes if they defeat their rivalry teams.

The game is certainly relaxing and fun to play with a very easy and traditional gameplay mechanism that requires a short learning curve. Besides, its character design and graphics are also attractive and add extra fun to the game. What’s really inviting is the interactive feature this game offers. In other words, players are pretty much encouraged to join the team events and  interact with others. This way, they can boost their rewards from the game, and also stay motivated in the game for a longer period, even after they finish all the levels and eventually join the champion league, which is a team-centered game mode. However, some players may find it less compelling to play repetitive contents once they join the league. For this when wish you focus on a single player mode, the updates of contents and new levels should keep up. Apart from that,  a few years after this game’s initial release, it has been upgraded with greater pay- to-win tendency.

From a socially interactive perspective, I think this game does make its effort in bringing players closer and creating a gaming community with a large active user base. However, as yet another casual puzzle game whose competing market is quite heated and saturated, which somehow inevitably leads the game mechanism into the deeper pocket of players, which is always the major reason to discourage players from returning.