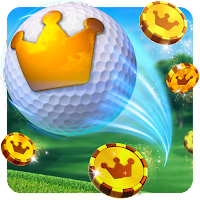 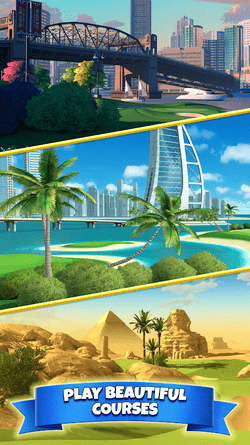 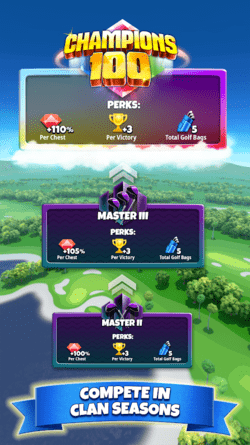 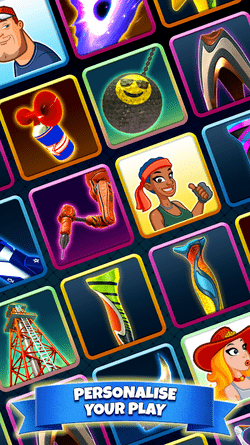 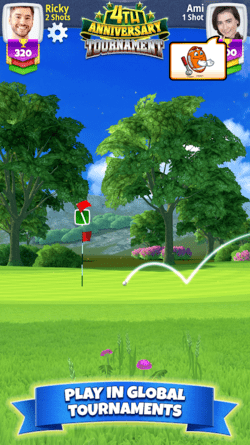 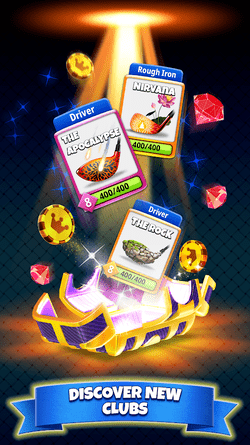 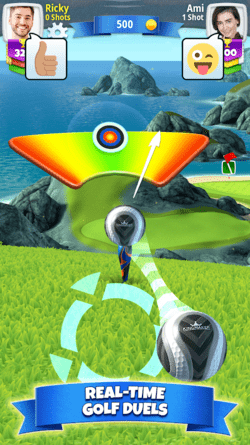 Golf Clash is a multiplayer game with provides players with a real-time experience. In the game, you can learn golf courses with players worldwide and participate in tournaments to gain awards. You can even challenge your friends on social media one on one. The game is rather interestingly challenging because you can get upgraded and unlock skills and new clubs as the improving of your golf playing capability. Your final goal to achieve is to be the King/Queen of Golf Clash. It is a highly efficient game because of its quick-fire gameplay mode. It features an innovative shot system that is easy to comprehend yet hard to master. The game offers a variety of training courses through which you can sharpen your skills. Club card bonuses are available to you if you can achieve weekly promotions. The most interesting and engaging feature would be its golf tournaments every two weeks, in which there are different players from all over the world. During your gameplay, you can share your thoughts and feelings with your teammates and opponents in a chatbox with emojis. You can also record the replays and share them with your friends on social media.

Wining a lot of good reputation from players, Golf Clash boasts the following advantages. Firstly, it has excellent graphics and animation designs. Secondly, it is a very engaging and sociable game because you can play with others in the same clan or against them. The most interesting thing is that since there are weekly global golf tournaments held, you can play with or against players from every corner of the world, and sometimes you can even form national teams to play. The game is rather challenging and there are diverse courses offered. It is a good time-killer. Lastly, the customer service of the game is pretty satisfying, and developers are very responsive to players’ feedback. Their service can be recognized as informative, responsive, and fair. Thus, it is a fairly good game for people to chill out with.

Yet, the game is also very controversial due to some of its innate flaws. First of all, you must ensure that your network connection is stable before you play the game. Secondly, it takes a considerable amount of money for players to play in the long run. The vicious competence between you and your opponents in the level of clubs or kits invariably make you vulnerable to in-game purchase in order to upgrade yourself. It turns out the result of the game is comparatively unfair, sometimes depending on how much money you are willing to spend on the game. In a word, people who lack self-control should be cautious in joining the game because it might lead to financial loss.

In a nutshell, playing Golf Clash is a good game for people to kill their time in a pretty interesting and challenging way. The game’s design of graphics and animations are beyond the average level, and the forms of competitions are fun to watch and engage in. The sociable feature of the game maximizes players' gameplay experience by allowing them to share their thoughts and feelings with others across the world, and even to compete with others in the game. Meanwhile, we can’t deny that the game also has some flaws. For example, it requires stable internet connections to function normally, and its profit-driven in-game purchase has formed vicious cycles among players, leaving players a negative impression of the game. No matter you take which side, Golf Clash is a game worth playing if you are good at self-control (or else you might lose some money when you play it).

Golf Clash is a casual competitive online game based on golf rules. The game is mainly embodied in the form of golf competition between players, which is simple and easy to understand. There are also various modes such as weekly league, friend battle, golden ball, and so on. This game is simple to operate and easy to use. Every battle will have different changes due to different opponents, different terrains, different wind directions and different operations, and different tensions, excitement, and fun.

First of all, this game is a very low-level casual, easy-to-play golf game without losing depth. Although not everyone can afford to play golf, considering the leisure attributes of mobile games and golf itself, a golf mobile game can easily bring more intuitive fun. Golf Clash, developed by Playdemic, combines easy-to-learn controls with well-designed gameplay for online matchmaking. The game begins with a short tutorial for beginners explaining two different gameplay mechanics. First, you have to decide how far the golf ball will go. For most people, the first shot wants to go as far as possible, but then, it must be a combination of distance and hole. Then, you can hit the golf ball to hit the ball, of course, you can also pull the ball to the blue target position at the bottom of the operation interface to serve. Also, the sweet spot is easy to spot, so players don't have to bother to guess. After that, a target with a moving pointer will appear, and your goal is to shoot the ball when the pointer is in the center of the target. Of course, that's easier said than done. Depending on your performance in the game, you can get different feedback, and if the movement is perfect, the ball will only be affected by the wind. If it is good, the ball will move in the direction of the pointer; if the operation is bad, it will hit the ball in the bushes or bunker. As you get closer to the finish line and you need to tap the golf ball, the game operation will change slightly. You still need to put the ball, but there will be a cyan path on the grass. You need to put the two The combination of the two can achieve a perfect blow.

Secondly, this game has very perfect game mechanics and a rich competition system. The game provides novice teaching. After the novice teaching, you can start matching directly, but what is certain is that although it looks like an online search your first opponent is likely to be AI because the opponent will be able to do it anyway. won't win. After that, you can choose to match online or challenge your friends. You can also choose different tournaments. You need to pay an entry fee for each game. If you win, you can get double gold coins. The number of trophies you have has an impact, which is also the main reference factor when ranking and matching. The number of trophies added for each win is mainly determined by the opponent's ranking, so novice players will never meet experienced players. The matchmaking mechanism is very simple. The one who hits the hole with the least number of shots wins. If both sides use the same number of shots, they will enter the tiebreaker, and the player who hits the ball closest to the hole wins. Like many mobile games, players will get treasure chests after winning, and you can open gold coins, gems, upgrade cards, and other similar items. Upgrade cards are primarily used to level up the club, and the higher the level, the better your accuracy, power, and in-game help the club provides. You can unlock a lot of clubs and upgrade them to the top level, which undoubtedly adds a lot of repeatability to players who like to collect.

However, this game still requires players to keep making money for it. The payment point of the game is mainly to draw cards. In addition to clubs, players can also buy card packs. Special cards can have different advantages, such as wind resistance, longer distance, etc., and these can only be purchased through gems. Gems are paid items in the game, which can be used to buy clubs, balls, and treasure chests. Players can also use gems to directly open chests obtained from online matching without waiting for time to unlock. Online matchmaking will lose most of the time before you master it, and the game doesn't have a training mode, just like life doesn't have a rehearsal, every time it's live. Through constant practice, you will gradually master the skills of winning, but each game can be nerve-wracking because one of your mistakes often means you are out, and it is more interesting that different field positions may also affect the outcome.

In conclusion, this game is a very fun competitive game and it is worth recommending to everyone.