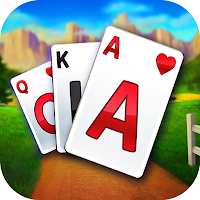 As a Hawaiian Solitaire poker game, Solitaire Grand Harvest is very interesting and helps you enrich your life. This game combines the gameplay of solitaire and social gambling while ensuring the player's stand-alone experience, and this game can be regarded as a new game. For example, games in this category are more like a marathon than a sprint competition.

First of all, Solitaire Grand Harvest not only has huge levels and slight business simulation elements but also adds social elements. That is totally different from match-3 games, because the great innovation of Solitaire Grand Harvest is that it combines the mechanics and gameplay of TriPeaks on the basis of ancient card games. While retaining the essence of the mechanism and gameplay, it has been processed and transformed, opening up the chess and card game market. new blue ocean.

The picture effect of this game is very beautiful, and the exquisite 2D game picture will make you fully appreciate the vitality of beauty. Sunshine, sand, tropical plants feel like you are on a tropical island during your vacation. A variety of backgrounds and card styles bring a tropical flavor to Hawaii. The background music of the game is pleasant and lively. It makes people feel as if they are in the embrace of the sea. The strong exotic flavor will make players truly feel the charm of the Hawaiian style. Especially in today's pandemic of the new crown epidemic, playing cards in this game scene is also a very good choice. With its simple rules and expressions, this novel poker game has always had a large audience in the European and American casual mobile game market.

On the other hand, however, the scoring mechanism of this game is based on the number of consecutive cards that players move back. Accordingly, the difficulty of the game is relatively low, and it is difficult for players to maintain long-term interest in it. First of all, in this game, on the premise of not changing the cards turned over in the deck, the more cards the player moves back at one time, the higher the score and the richer the rewards. In addition, corresponding props are also set in the game, such as universal cards, cards that change the deck, etc., which greatly reduces the difficulty of players, making it difficult for some players to gain a sense of challenge and achievement from the game.

This game received a lot of good reviews. Overall, if you like classic free solitaire games like Klondike, Pyramid, FreeCell, or Spider Solitaire, then you'll love the Hawaiian Solitaire experience at Solitaire – Solitaire Grand Harvest. Actually, judging from the game Solitaire Grand Harvest, poker gameplay has become a very important trend in the field of casual games. Casual mobile games in many countries and regions have begun to integrate poker gameplay with elements such as match-3 and level plots.

Developed by one of Playtika studio—Supertreat, Solitaire Grand Harvest is a top F2P mobile card game, available on iOS and Android platforms. This game well incorporates a traditional Aloha Tripeaks Solitaire gameplay with a lovely farm theme. Players can enjoy the fun of both card games and various farming activities in this mobile game on the go. The card game mechanism drives the farming activities forward and makes gaming progress as tripeaks puzzles are solved and more crops are planted and harvested. Players need to accomplish the goal of each level of card puzzles to gain starts to build and upgrade their farm; besides, they can also participate in various events and special activities to win extra gifts and rewards to speed up their gaming progress.

The gameplay of Solitaire Grand Harvest follows two closely connected tracks. The main theme of the game is to build a farm, which involves various activities such as planting crops, raising barn animals, attending and harvesting crops, decorating farm houses etc. In order to carry out those farm building tasks, players need to win each level of Tripeaks puzzles, so that they would win the stars and other rewards to “spend” on their farm building. Apart from the straightforward gaming progress, plays are also given side missions, daily challenges and other random surprises to earn extra bonuses, stars, credits and gems to gain perks and progress in the main gameplay. Occasionally, with a bit of luck and sharp mind, they would also gain some special treats that add spices to the game. Another attractive feature is the possibility and options for the personally-tailored design and decors for the farm. Players can discover more of personalized elements with the rewards they earn; they are also likely to extend the gameplay with more contents as they win higher credits.

Solitaire Grand Harvest is definitely a game for all. It is quite simple to start off and the farm theme is relaxing and fun, which adds more attractiveness to a card game. Besides, the game imagery design and graphics are very beautiful with nice details and styles. What’s more, it regularly offers special editions and themes in different seasons, which echoes the farming theme really well. Players can also share their enjoyable gaming experience with others on social networking by hooking their account to Facebook. Indeed, there are critics about the game being somehow addictive, which could be either a good or bad thing depending on the playing behaviors. Apart from that, quite a lot players find that the difficulty level soars up at some point and the gem rewards get smaller as they proceed in the game, which is often criticized as an intentional mechanism to trigger in-app bonus purchases. Some occasional the online purchase causes errors in payments as well.

Generally speaking, the game quality matches its high rating. It well balances the brainy sharpness and the sit-back relaxation. The farm building related elements definitely add more flavor and fun in this otherwise conventional Tripeaks Solitaire game. Card game driven farm building is a novel mechanism to push game progress. Players can switch between being alert and winding down through the well-paced game rhyme. The most fun part of the game is that the farm regularly upgrades and adds new crops and exclusive decorations for keep players staying fresh and hooked up with the game. Another thing to point out is that the simple farming and harvesting progress easily satisfies most players psychologically. One can always find a sense of content and accomplishment in this effort-reward based game. Therefore, I would absolutely recommend this wonderful mobile card-based farming game to anyone who seeks both excitement and relaxation.