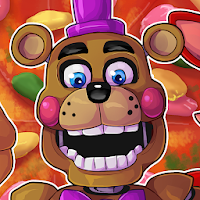 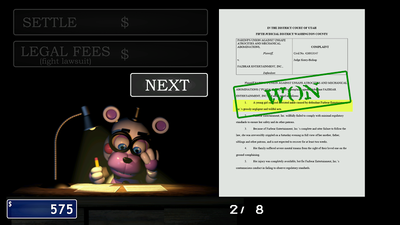 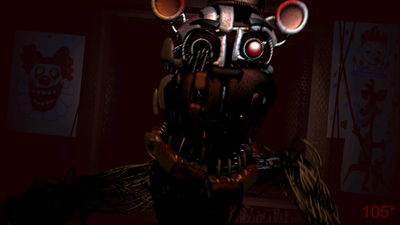 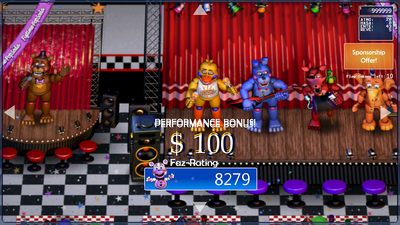 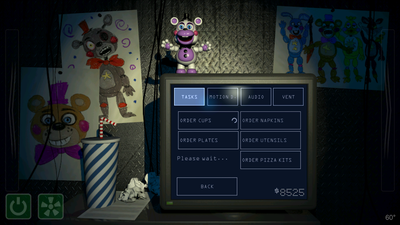 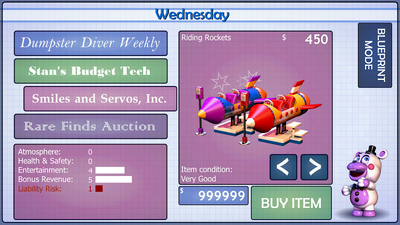 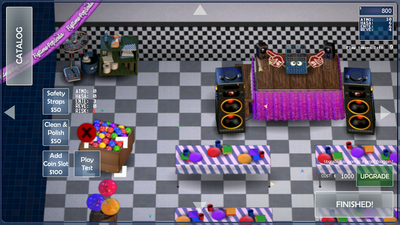 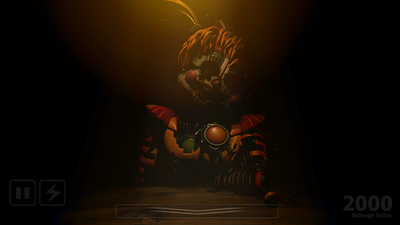 FNaF 6: Pizzeria Simulator is a business simulation and survival game published by Clickteam USA LLC. It is also the sixth game in the Five Nights at Freddy series. In this game, players will start with a pizza shop, and they will make the pizza themselves, for example, placing toppings such as pepperoni, pepper, onion, tomato, pineapple, olives, and peppers according to the pizza taste. After the pizza is made, players can control an electronic animal such as Freddy Fazbear to distribute the pizza to customers. As the owner of a pizzeria, players need to build and manage their pizzeria. They need to buy equipment for the restaurant and set up restaurant seating before the store opens each day.

Players can see a list of tasks for the day on their computer and want to complete them. During the game, players can monitor motion detectors, audio, and air vents from their screen. Then, the player will enter a terrifying and great adventure. Players must be very careful in facing emergencies because everything in FNaF 6 will be surprising. Players do a lot of things every day, especially avoiding that animatronics propelled by electromechanical devices. But the most important thing is not to get caught by this terrifying animatronics or the player will end the game. In FNaF 6, players repeat completed tasks multiple times until their six working days are over.

FNaF 6: Pizzeria Simulator has a lot of strong horror elements. Players must prepare from the bottom of their hearts and face all these terrifying animatronics with a cool head before the game begins. Players will find that it's not easy to be the owner of the awesome Freddy Fazbear's Pizzeria franchise. There are many similar activities to running a restaurant, but there are so many different things to do. Players will not only have to put in the effort and time but will have to find other ways to attract customers just like any other restaurant owner. Not just making sure the equipment is running well before the pizzeria opens its doors, making amazingly satisfying and delicious pizzas for customers, but even arranging great shows, promotions, discounts, or gift giving. Therefore, no matter what difficulties or perils players face, they had better not give up easily. Players should know that FNaF 6 still has many complex puzzle games waiting to be challenged by them. Players need to work on these puzzles that are not the same type, and they need to take different steps and think differently to solve the problem. It's not difficult to win, but it's not easy to persevere after the difficulties. But players won't get bored because they get a sense of satisfaction once they have successfully solved a puzzle once. This sense of satisfaction will give players the courage to continue to face difficulties.

After closing the doors of the Fazbear's Pizzeria franchise, the player's quest isn't over, or even half-finished. Players beware of animatronics that may be lurking in the vents. If the player feels unusual, immediately turn the flashlight towards the vent and scare the animatronics away. This way the player can end the day smoothly. By the next day, players will be able to use their previous earnings to buy new equipment for the restaurant. This will also greatly affect customer satisfaction.

Overall, FNaF 6: Pizzeria Simulator is a fun business simulation and horror point-and-click game. Being a point-and-click game, players can directly control their characters through a point-and-click interface and can move around and touch the available characters to accomplish their goals in the game. All this is very simple operation. As a business simulation for building a pizzeria. Players need to make the perfect pizza and keep customers happy. When more customers like to walk into the player's pizzeria, they can win more coins and use the money to choose decorations for the store to upgrade the pizzeria. But players need to pay attention to the pros and cons of buying equipment for restaurants. This requires players to make smart decisions related to the pizzeria business. Keep at it, and through the six days in the game, the player is sure to become the best pizzeria operator.

According to the time calculation, FNaF 6: Pizzeria Simulator is a plot that takes place after the FNaF3 haunted house is burned. Therefore, in FNaF 6, mechanical dolls based on FNaF 3 and FNaF 5 dolls appeared at the same time. Considering Henry's motivation, it can be considered that the time points of FNaF 3 and FNaF 6 are not far apart, so there is not enough time for the fifth generation to occur. after three generations.

FNaF 6 follows the plot of previous generations, allowing players to dive deeper into the game. The story in the game develops FNaF 6, and the remaining souls that have not been liberated exist in three mechanical dolls, namely Spring Trap, Puppet, and Kannad. Henry felt that he was responsible for all this happening, and to stop these broken things, he made up his mind. The spring trap escaped from the haunted house, Kannad wanders around the sewers, and the puppet has been missing since the second generation. It was very difficult for Henry to find them, so he had an idea - not him to find them, but to let them find him. To lure the three mechanical dolls to him, he opened six generations of pizzerias. It is for this reason that the Sixth Generation Pizzeria is more like a trap to lure mechanical dolls than a restaurant, and it has successfully performed its mission. But something was wrong - it lured four dolls instead of three.

In FNaF 6: Pizzeria Simulator, the background, and content of the game are more fleshed out and detailed. The first one is about spring traps. After the fire in FNaF3, the mechanical play has changed (I don't think there is a causal relationship between the fire of the three generations and the change in his appearance), and the name of the doll has also changed from Springtrap to Scraptrap (hereinafter referred to as the abandoned trap). Abandonment traps appear in the back alleys of pizza shops because of six generations of pizza shops. The second is a puppet. To free his daughter, Henry specially made a black bear doll Lefty (the full name is Lure Encapsulate Fuse Transport and Extract, that is, seduction, compression, fusion, transfer, extraction) to lure and capture puppets. After Henry placed Lefty (hereinafter referred to as Xiao Zuo) in the back alley of the pizza shop, he successfully captured the puppet-the puppet climbed into the interior of Xiao Zuo. The origins of the third and fourth dolls are a bit more complicated, both from Kannad. There are four dolls' souls inside Kannad, but in addition, there is Kannad's Will Book.

Secondly, the operation of the game is also inherited from the previous games of this series, making players both familiar and fresh. In this game, because the four mechanical dolls don't look easy to mess with, and they all appear in the back alley of the pizza shop, the four Rong Xiong, Xiao Zuo, Abandoned Baby and Abandoned Trap is called "back alley four" rogue". That's how Michael came to work as a night security guard at Six Generations Pizza, and since every night (or every other night) one of the four hooligans appears in the back alley of the pizza shop, his (part of) job is to recover the mechanical dolls that appear and make sure of them. Record the behavior of the TA. After the four hooligans were successfully recovered, the soul liberation plan officially began, and fire swept the entire pizza shop. Rong Xiong, Abandoned Baby, and Abandoned Trap were all burned by fire; although Xiao Zuo was not burned, judging from the full name of Xiao Zuo's name, the puppet's soul should be freed; Michael has experienced family Death, being dug out is also not human. Although theoretically, it is possible to live forever, it does not seem interesting to live like this; because Henry initially proposed to open a pizza restaurant, Henry felt guilty and felt that he had considerable responsibility for all these tragedies. The souls of Huanxiong, Huanhu, Bella, Elizabeth, and Charlie were freed in the fire; Henry chose to be burned to death by the fire with his daughter, and the soul ascended to heaven; in the fire of the pizza shop, Henry gave Michael an escape route. The road, but Michael chose to end his life in the fire; as for William, he went to hell because of too many evil spirits and turned on the UCN mode. At this point, the story finally came to an end.

However, this game series has many questions due to the unclear introduction of some plots. For example, why can a soul possess a mechanical doll? Do all mechanical dolls attract souls? Remnant is mentioned many times in the official manual and the sixth generation plot. What does this have to do with the mechanism of soul possession? What does fire have to do with the liberation of the soul? There are many similar problems. And so far, no one has been able to give definite answers to these questions. All players can do is make guesses, and then modify the original plot to accommodate their guesses, but often find that the revised new plot is contradictory.

In general, if you play FNaF 3, you can also play FNaF 6, because the backgrounds of the two are very similar and closely related.