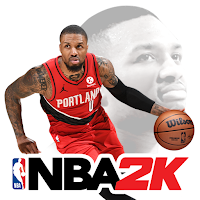 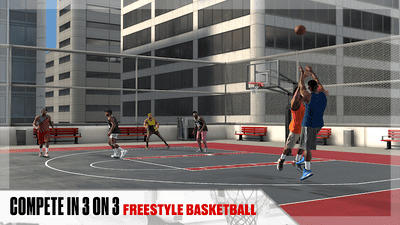 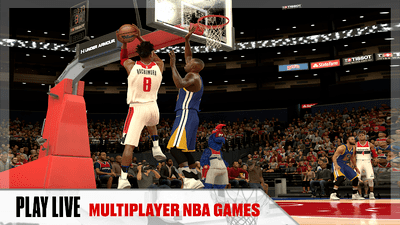 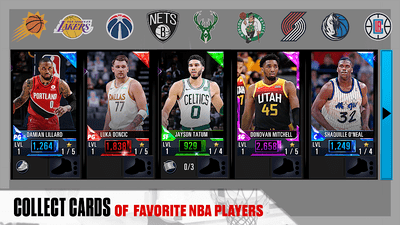 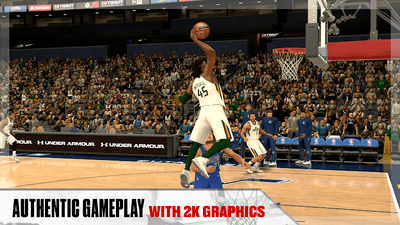 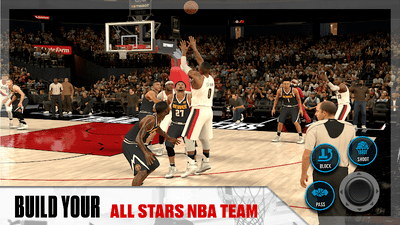 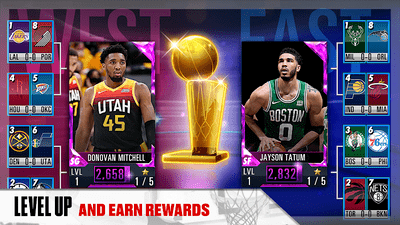 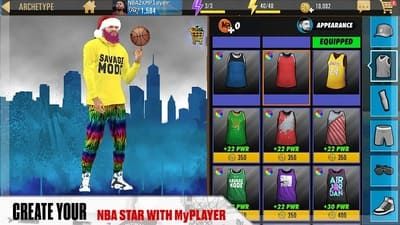 NBA 2K Mobile Basketball Games is a sports game providing players an authentic experience of playing basketball as professionals in the NBA. In the game, players can build their all-star teams and play with NBA legendary characters like Michael Jordan and Kobe Bryant. The game sets daily goals for players to challenge, making players entertained all the time. There are different modes of gameplay at different levels and involving different numbers of players. For example, players can choose either to play 3v2 or 5vs according to their own wills. Players’ tasks are to build their NBA teams and advance their professional careers. Players should collect cards of NBA players and create their own dream team. The game is played online so an internet connection is required. In the following part, both of the game’s pros and cons will be reviewed.

NBA fans can’t resist the interesting and challenging game of NBA 2K Mobile Basketball Game because it features so many classical NAB elements. First of all, players can choose NBA superstars as their team members and customize their own teams, making themselves feel a sense of leadership. Secondly, there are diverse play modes for players to choose from, giving players a great extent of freedom to customize their games. Especially the real-time mode, in which players can compete with millions of others worldwide. The daily objectives and rewards keep players encouraged to sharpen their skills, and those challenges make players feel a sense of achievement. The community of players online and events held now and then make players feel a sense of belonging. Also, the high quality of graphics and vivid actions of characters are visually pleasing and offer players an immersive gameplay experience. Furthermore, the game is free and won’t cost players plenty of money. Therefore, the game is suitable for players who are interested in basketball, including young kids.

But there is also negative feedback about the game which can’t be neglected. To begin with, NBA 2K Mobile Basketball Game is criticized for having too many bugs. For instance, some players complain that the screen doesn’t function normally. Every time they click on the screen, there is no response. Others say that the game crash all the time when they intend to load the screen. Moreover, the game is regarded as unfair. Some reflect that sometimes even though they have teams with stronger power, their team will still be beaten by the weaker ones. Lastly, since the game should be played online, an internet connection is a must, causing problems for those players who can not access properly the internet. Thus, think it twice if you want to have it a try.

Anyway, NBA 2K Mobile Basketball Game is a fun and enjoyable sports game featuring tons of popular NBA elements, including the selection of NBA superstars, NBA star cards collection, lifelike moves, and graphics, diversity of gameplay mode, etc. Its community of players worldwide also offers players a chance to communicate and compete with people who share the same hobby with them. Still, we can’t deny its occasional flaws, like the glitches of game crashing and mal-functioned screen occurring now and then, the unfairness in the team-play, the requirement of internet connections. However, despite all the before-mentioned disadvantages, compared with other profit-driven sports games, NBA 2K Mobile Basketball Game is player-friendly with high-quality graphics and content. As a result, there is no doubt that I would like to recommend the game to people who love the sport of basketball and who are fond of the NBA. Because generally speaking, it is an interestingly challenging game. So don’t hesitate. Download and install it on your digital devices now.

Developed by 2K, Inc., the same creator of other major NBA 2K game titles, NBA 2K Mobile Basketball Game is a free online basketball game for players on smaller screens. It is available for downloading on iOS and Android platforms with in-app purchase options. This mobile game incorporates various elements of playing as a pro in NBA season and managing a dream team at the same time. In other words, players of this game play a double-role of both basketball player and team manager. As a professional basketball player who chase a NBA career, you must participate in different events and fulfill various goals and objectives. These events, objectives and challenges come with rewards as you play through and achieve the goals. As a team manager, you have to think strategically to carefully hand pick your super star players and build a dream team; at the same time, you also need to boost the team training effect and take your team to some limited events and win exclusive rewards. What’s more, this game also offers regularly updated new themes and events for you and your team to explore and take on challenges. Players can collect the legendary basketball cards to glorify their team rosters and claim huge rewards. Plus, an unique customization feature is also available to personalize your favorite players.

Like other popular titles developed by the same creator, this mobile game also features itself with high quality graphics and solid gameplay performances. Players can gain an authentic NBA professional level action and motion experience; apart from that, the camera works and options also enhances the sports nature of the game, not to mention the intuitive and flexible control of the game on the go. There are definitely a lot of events going on and multiple things to do for players either they are focusing on the player role or manager tasks. Basketball players get to take part in the daily objectives which enhances their performance and stats and offers rewards accordingly. Besides, there are a number of playing mode for them to select. They can do their practice drills in 3v3 freestyle; or they can compete in 5v5 matchups; and of course they can join the real-time pvp massive multiplayers with the online community gamers. On the other hand, players conduct the team management in a more strategic way. By collecting cards of their favorite NBA players, managers can enlist their top players and strengthen up their team capability. Moreover, the special MyPlayer feature allows tailored customization of players, which would add even more odds to your team’s victory. Another nice feature of the game is that it integrates the gameplay sessions throughout the entire NBA season and playoffs, creating a realistic basketball team playing and management game ambiance.

Although the game mechanism and motion/action process are quite satisfying, it does cause some systemic errors, mostly in the form of constant crashes, forces shutoff or auto logouts, which can be quite distracting for a sports game where stable control and consistency really matter.

Generally speaking, this game is a reliable 2K basketball mobile game, with quality graphics and motion controls. The gaming contents are quite rich and diverse as well and the new player modes and events continue to enhance its playability for a longer term. It is defiantly good choice for basketball fans and especially those NBA loyal audience. Through this mobile game, players can gain both the authentic experience as a top level basketball player, as well as a strategic team manager. It wraps up many aspects of the sport and league events in this mobile app for players to gain an all-round NBA simulation experience.

this games great and its as good as nba 2k23