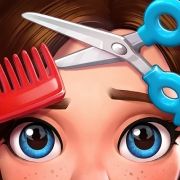 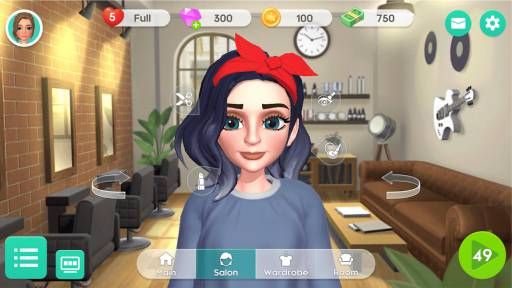 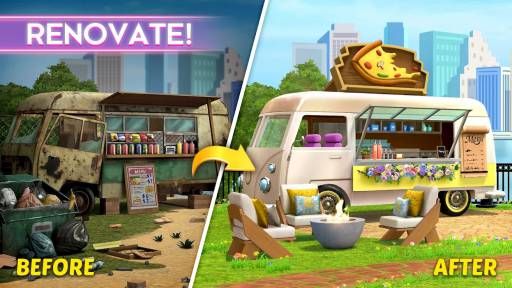 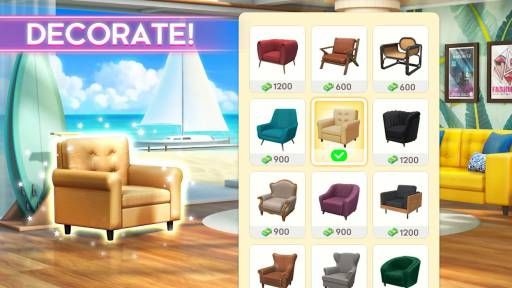 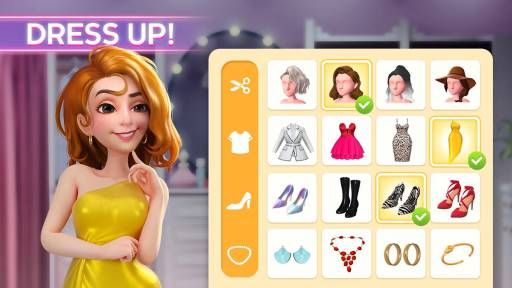 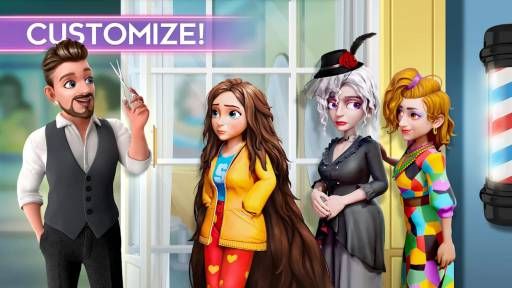 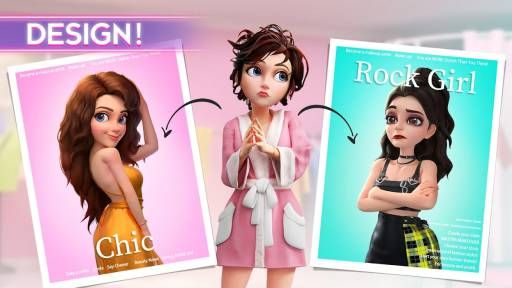 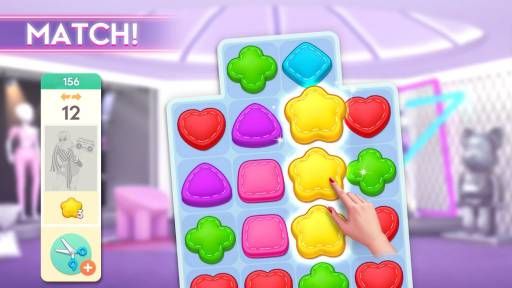 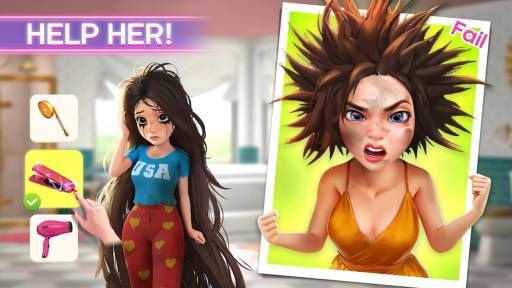 Project Makeover is a matching game, and the gameplay in the levels is still the traditional way of completing the different level goals. The storyline outside the level is rough as follows: the player plays a designer and leads a three-person design team, responsible for redesigning and restoring the three parts of makeup, clothing, and decoration to neat and delicate appearances for various sloppy customers. By the way, players have to solve the problems that customers are currently encountering in the plot. For example, the player needs to try making a graduate who has just entered the workplace, into a white-collar woman who can adapt to society, or restore the uncle in the garage, which is covered in oil and sloppy, into a refined and outstanding man.

First, the game's levels connect the level line to the storyline. In PM's level currency loop, the gold coins obtained by clearing the level are directly used to advance the main storyline, and the currency for purchasing level items is released in the mainline storyline so that the level currency and the story currency can advance simultaneously. Although the experience of the purple diamond is very stingy, players still recognize this point based on the performance of the results.

In addition, this game also retains the experience core of the plotline and innovates in system packaging. PM changed the original single-package renovation to parallel promotion from three dimensions of makeup, clothing, and decoration. Different dimensions give different performances, which can effectively alleviate the long-term fatigue caused by repairing in a single dimension. Make-up, Dress up, Decoration, three dimensions have many successful products in all kinds of ultra-casual and casual games, and there are many intersections and commonalities in their user positioning and experience, which reduces these factors to a certain extent. The cost and probability of failure after the fusion of various gameplays can even achieve the effect of 1+1+1>3 after being handled well.

Not only that, but the system design of this game is also very refined and decent. There are two good system designs, one is the avatar system that uses banknotes to turn around. In this system, players can use the decorations dropped in the level or buy decorations with banknotes to dress up the player's image and use this image to participate. Enter the simple social gameplay of other players - like, add friends, etc. Although we are accustomed to this system in many games, it is very appropriate in the system and settings of PM. What is appropriate? My definition is accomplishing the greatest system purpose with the most restrained system design. I also infer that this system will have a very prominent role in supporting player fission and enhancing the game viscosity of social players. Another system is the side storyline unlocked with the main storyline: as the player’s main storyline progresses, a sideline storyline based on performances will be gradually unlocked, performing some skit-sized sideline stories, and giving players a small amount of currency. In my opinion, the main purpose of this system is to design exquisite short stories through the plot, to bring players some more complete and expressive plots, and to enhance the player's experience of the game plot and the mainline itself. The complexity, function ratio, and performance of the two functions are actually for the mainline and level services. If you don’t play, it will have no impact on the mainline. If you play, it is also a system that serves the performance of the mainline. There is no additional burden on the player's core gameplay time, but the playability and long-term goal are very strong, which is a very lightweight system design in the game.

However, personally speaking, under this design, the link between the main plotline and the level line is a little weak. The promotion of the plotline and the promotion of the level line are not strongly connected, which also makes When I play this type of game, with the advancement of the game levels, in the later stage, the pursuit of the plotline and the level line is gradually disconnected, because there is no need to advance the plot synchronously. Thus this would lose the fun of unlocking the plot.  It is played purely as a level-oriented game because I found that the plot is similar and very long, and I am too lazy to watch it.

Overall, this game is worth a try for those players who like both matching games and slot games.

Developed by Magic Tavern, Inc., Project Makeover is a mobile puzzle game with a strong fashion and decorative motifs. It is available for downloading on iOS and Android platforms. This game integrates a conventional match-3 puzzle game with fashion and living space makeovers. Like other games in this category, players need to play through those puzzles and achieve the level objective to gain the capacity to achieve the decorative goals of the game.

The puzzle-solving part of the game should be not unfamiliar to players who have ever played a match-3 of any themes. The mechanism is classic with no surprises and hiccups. You swipe across the interface to connect at least 3 consecutive items of the same color and shape to eliminate them until you hit the objectives in each level. On top of the basic gameplay, players can always create more -destructive- combos to generate boosters to reach the targets faster. There are a few common power-ups patterns players can try to observe and create when they play, such as the Rockets, Firecrackers and Rainbows. Trying to create booster can help players save some moves before they complete the goals, as they are only given a limited number of moves in each level. Apart from those boosters that players create while they solve the puzzle, there are also in-game boosters ready at the beginning of the challenge. Players can activate those when they move into higher levels that are usually much more difficult. Plus,  there are 3 tools(scissor, comb and perfume bottle) that players might resort to when they need emergent aids before their moves are running out. With the rewards gained from solving those puzzles, players can shift their attention to the decorative elements of the game. Like many other match-3 puzzles, Project Makeover also involves redecorating living spaces, such as changing wallpapers and adding nice furniture. However, its major feature is about helping a characters to change or enhance their appearance attractiveness. There is a large collection of fashion-related items from the head to the toe, covering outfits, hairstyles, Make-ups, accessories and more. What’s more, the most fun part of the game probably lies in the personalities and reactions of the characters who have urgent needs of appearance makeovers. Players will encounter with “clients” from all walks of life and some of them are drama-queens. This funny touch of the game adds so much spice to the otherwise relaxing and calm decoration game.

Project Makeover has been listed as Editor’s Choice on Google Play with large amount of downloads. It is very easy to get started as the match-3 game is no stranger to anyone. The game also has enough levels to offer so that players can be addicted to those endless puzzles. At the same time, it also offers a large variety of decorative items and possibilities, players can be kept fully preoccupied in this game. With a large catalogue of fashionable collections, players enjoy a large flexibility of customizing their clients and behold their unexpected reactions. Furthermore, players can get involved in a bunch of mini games and side events where they can get refreshing contents and more extra rewards. Surprisingly, sometimes, jackpots await in your email box as the developers would sometimes random send out gifts directly to users email address.

However, there are also common complaints about such casual game. Mostly those fashionable items are too costly and the free ones are not necessarily the ones catching players picky attention. For more stylish ones, players usually have to pay real money to upgrade. Besides, the waiting time for life renewal in the puzzle games can be rather too long. All these mechanisms point to the same direction—pay for the better gaming experience. In general, this game is still very solid as it incorporates quite a lot of contents into the app, and it definitely delivers the quality that corresponds to its download numbers and reviews.