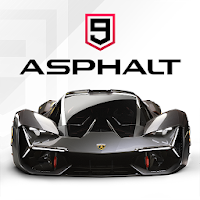 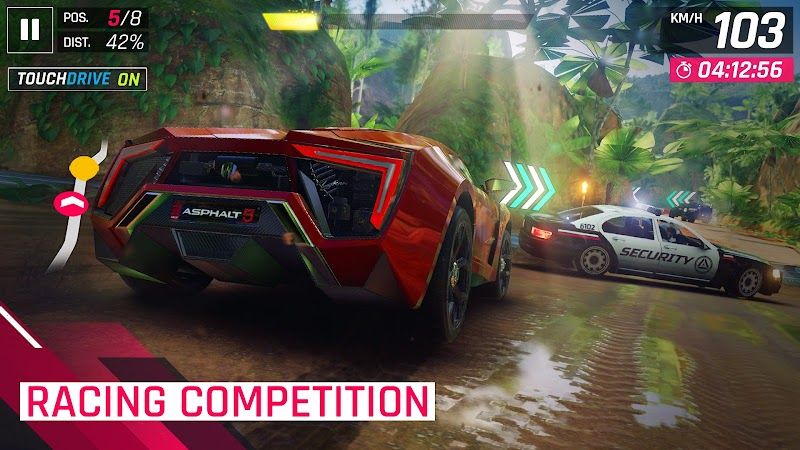 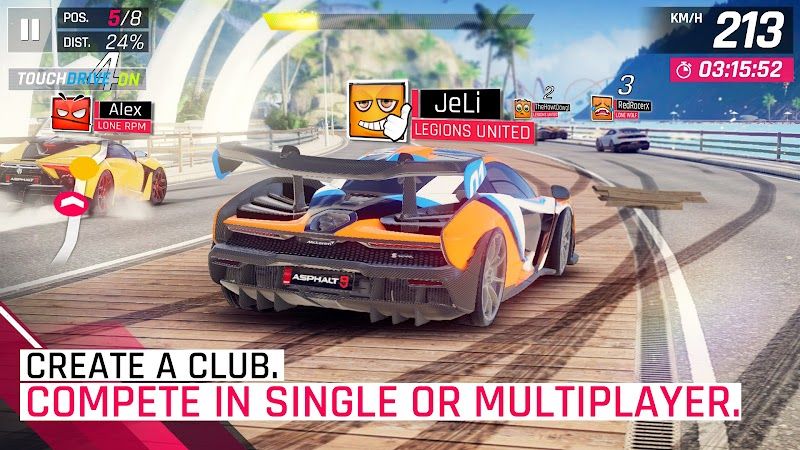 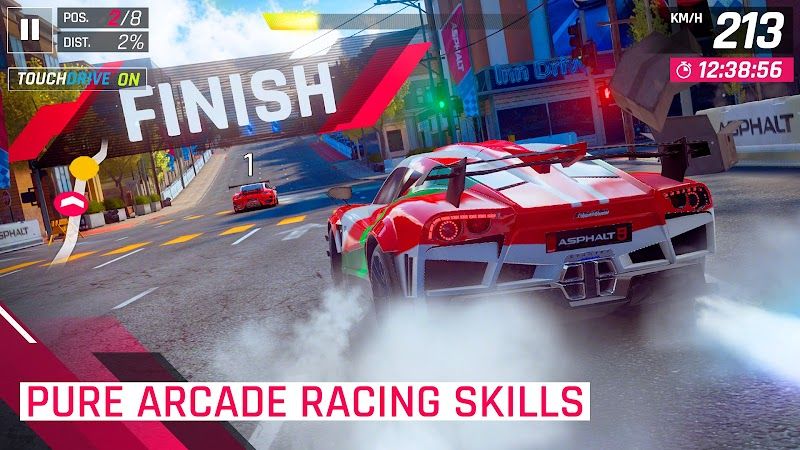 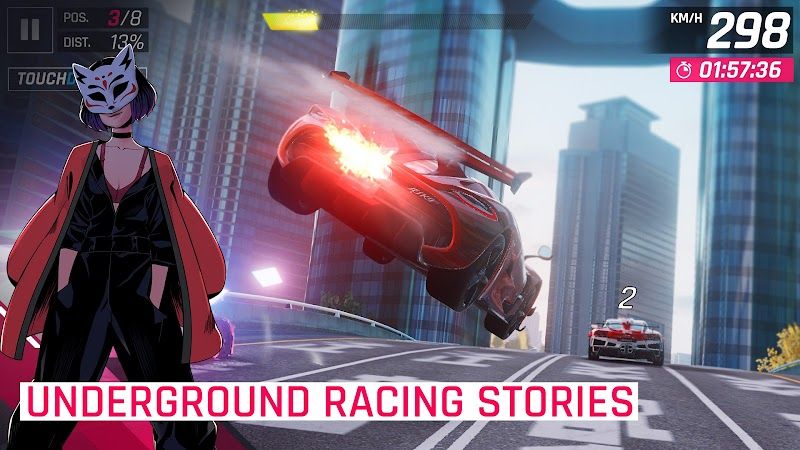 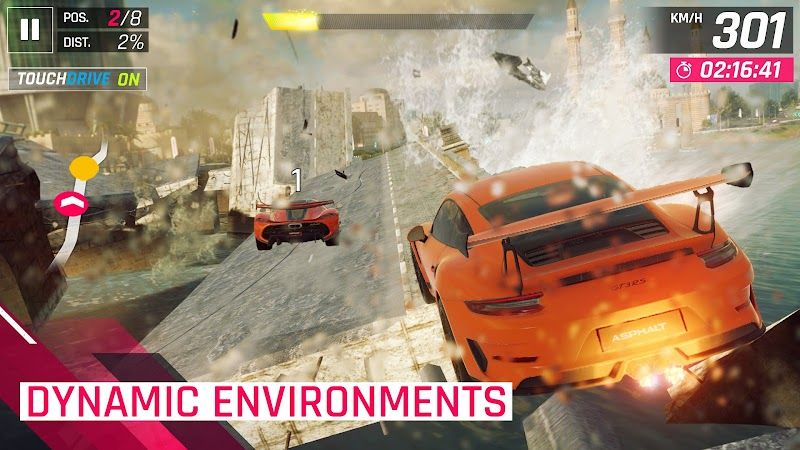 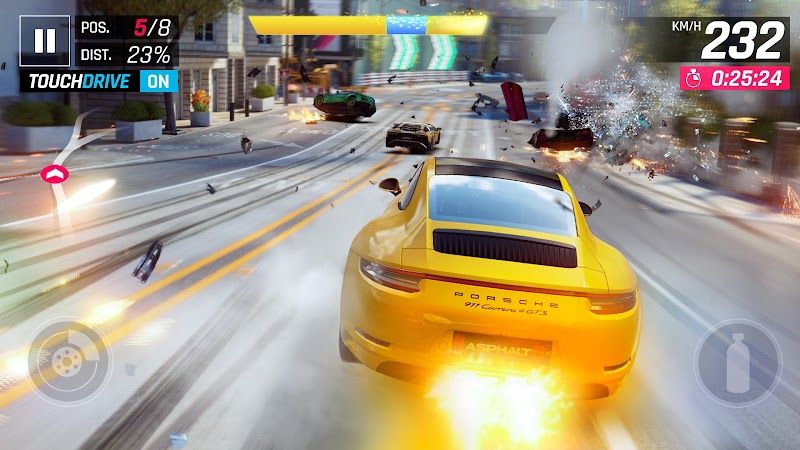 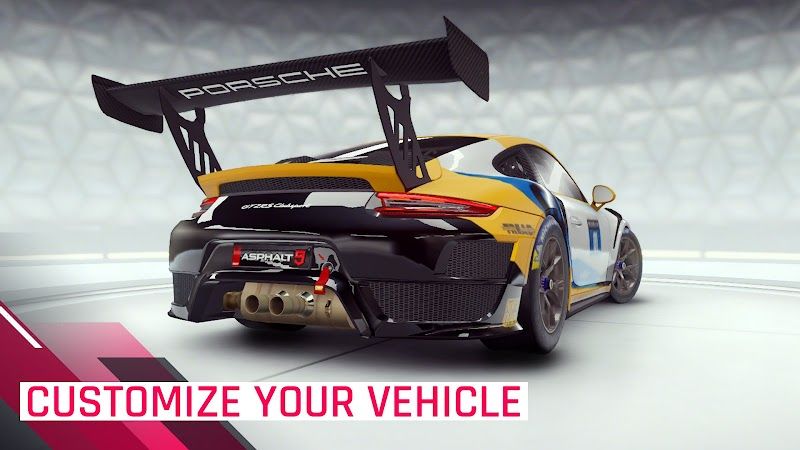 First of all, the controls of this game are very simple. Players can use the tilt panel to steer, tap the left and right screens to steer, or use the virtual steering wheel to steer. The game also uses the characteristics of the Asphalt series and the nitrogen accelerator. The Nitrogen Booster allows the player's vehicle to increase in speed for a short period but does not consume Nitrogen value during the game. There are many ways to use the Nitrogen Booster to get Nitrogen, such as destroying other drivers' cars, using stunts to gain Nitrogen buffs on the track, tail-flicking, clearing obstacles, and more. In high-speed collisions, in high-speed collisions with other drivers' cars. Hitting another driver's vehicle or wall at high speed will cause the vehicle to be destroyed, but will then respawn slightly back from the point of damage. Each track has a different way of playing. The main gameplay, such as the classic race, is like a car race, using a variety of vehicles to get first place. The game of contagion is quite special. After a while, the trailing driver will turn green and become the infected driver. The driver has unlimited nitrogen, but at the same time a timer will appear, the time will be zero and it will explode, the driver will recover and will not explode again until another door hits another infected driver, or hits another Infected rider. The gameplay is diverse, giving players different game feelings and experiences.

In this game, another good point is that this game supports multiplayer real-time battles and has strong social functions. In many people's games, players can compete online with other players in time, and win different leagues to receive special rewards. Players can also participate in daily or weekly tournaments to beat other players. In an instant attack, the vehicle must cross the finish line before the instant attack. Regarding the knockout, after the race starts for a while, the timer of the last driver will turn into a red timer, after which the driver will explode and will not be revived. When the player presses the button twice, the vehicle's speed increases, releasing a purple pulse from the vehicle.In addition, players can participate in daily or weekly tournaments, and there are also multiplayer game modes, even competing with other players in different leagues to win for special rewards.

However, compared to the previous A8, although the image quality improvement of the A9 is obvious, the operation mode is greatly below the standard. Maybe some people say that my level is not good, I admit that I was really good in the A8 career race until the fifth season, but the new model really made me very uncomfortable. This kind of car doesn't need to look at the road and only needs a little bit Racing or Asphalt. Then I changed the operation mode and then found that the new car of A9 is still not very easy to use. Compared with the A8, the initial racing car of the A9 is indeed faster, but relatively speaking, it is also "lighter". If you flick the taillights, you will not know the whole car where to go. If you are accustomed to the feeling of the A8, when you are to play the A9, you will feel not smooth. In addition, I wonder if the interface UI of the A9 is thicker? I don't like this kind of technology-rich design. On the other hand, such as the racing car display is also trembling in this rough UI, I can no longer watch the racing car with half of the screen.

To sum up the progress of the A9 compared to the A8, the picture, cool is just one word, I will only say it once! For example, cars with different jet effects will also have different special effects, and even add a spiral jet left and right, service! There are also some small details like the salute at the finish which looks great.

Asphalt 9: Legends is a car racing game featuring world-famous car brands and manufacturers. Players will be able to play the game in either single or multiplay mode with a variety of location choices. The game allows players to customize their cars with powerful and advanced parts along with decorating the appearance of their cars, including the painting, the types of wheels, and so on. Players all over the world can participate in the game to compete for a place on the ranking list worldwide. Asphalt 9: Legends is rewarded with the “Editors’ Choice” Awards and has 2,414,372 reviews with 4.5 stars out of 5 on Google Play. It contains in-game ads and purchases. The next part will focus on the analysis of its strengths and weaknesses.

When it comes to the features worth compliments, first of all, just like what has been mentioned at the beginning of the review, the game allows players to choose their cars and customize their cars according to their taste. Also, the control system of the game is excellent. The game features not only manual controls but also auto controls. The manual control experience will make you feel like you are playing as a professional car racer mastering the car by steering along with the courses. As for the auto control, it will allow you to turn your attention to other surrounding features during the gameplay like the environment, sound, graphics, etc. Also, the game offers events and career modes as well. In this mode, you will be able to experience different kinds of activities up to 900 types with a time limitation and a story background. In addition, the game offers players more than visual enjoyment over the excellent graphics and smooth controls, but also a comprehensive sensation of car racing, making it a quite immersive gameplay experience. Furthermore, in the multiplay mode, players could form clubs and compete with other players to reach the top of the leaderboard. In each round, the game permits players up to 7 to compete with each other. Finally, there are also four cultural phases each featuring a type of new car, including GT in phase one Europe, Senna GTR in phase two Asia, XJ220S TWR in phase three America, and Ultimate RS in the last phase.

However, it is not the whole story. Asphalt 9: Legends also has some controversial drawbacks that dissatisfy players. Taking the control system, for example, some of the players report that the controls are not that responsive and it takes time for the car to respond to the instructions of players, which to some extent has a negative impact on the gameplay experience of players. What’s more, there are some stubborn bugs existing in the game. The game crashes during the gameplay occasionally, making players quite upset about the loss of their scores in the game. Last but not the least, it is quite hard and time-consuming for players to upgrade their cars to a level that players think is competitive enough.

Now that we have reviewed both sides of the coin, we can come to a conclusion that Asphalt 9: Legends is a competitive and fun car racing game. It offers players a lot of choices in terms of car brands, appearances, gameplay modes, control systems, etc. However, the support team and developers should take players’ negative feedback into consideration as well in order to make the game grow even more popular among players all over the world. The game is recommended to those who are racing car fans but not recommended to young children since there are in-game purchases.