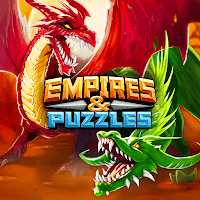 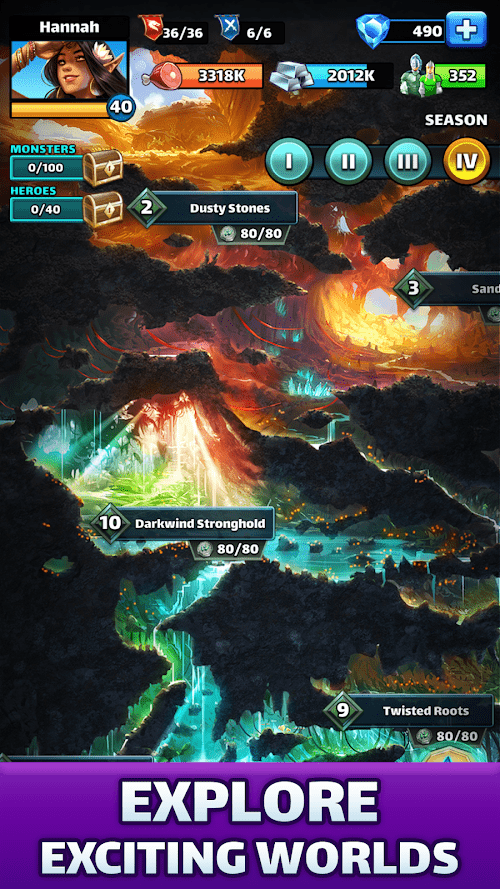 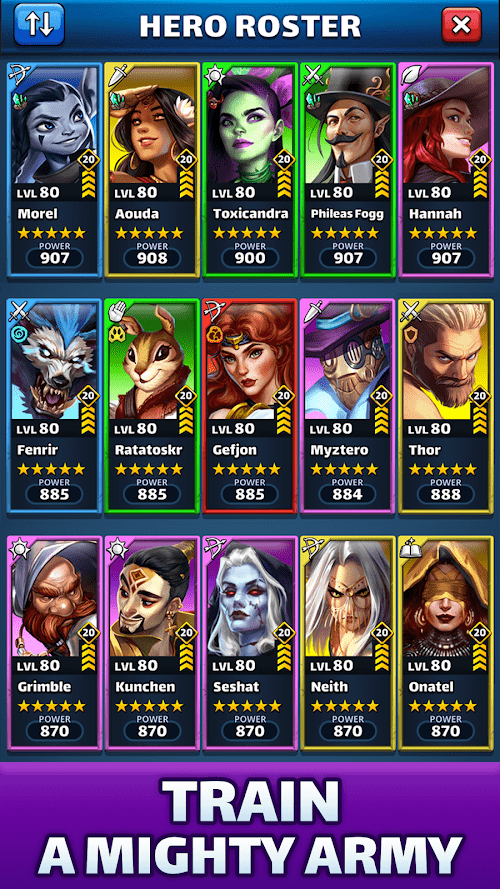 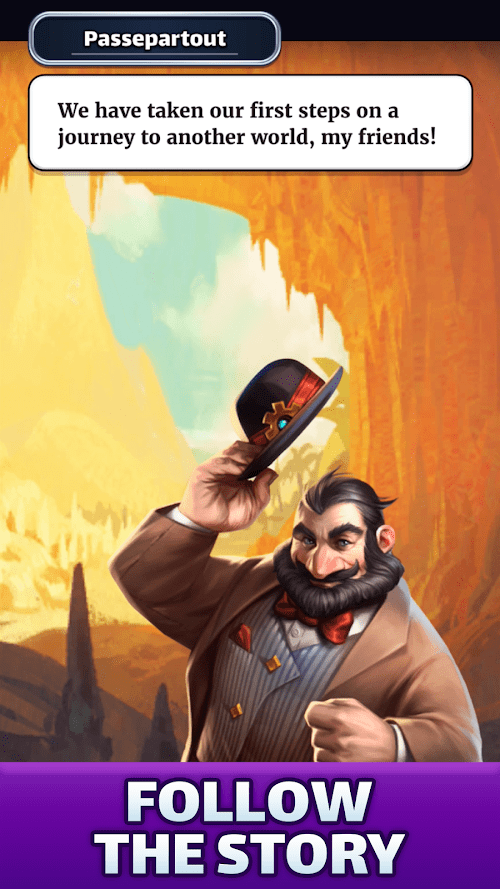 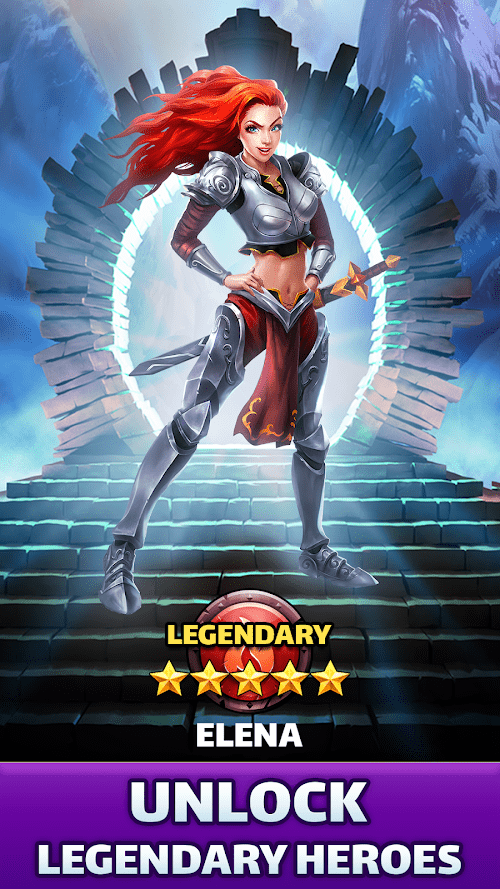 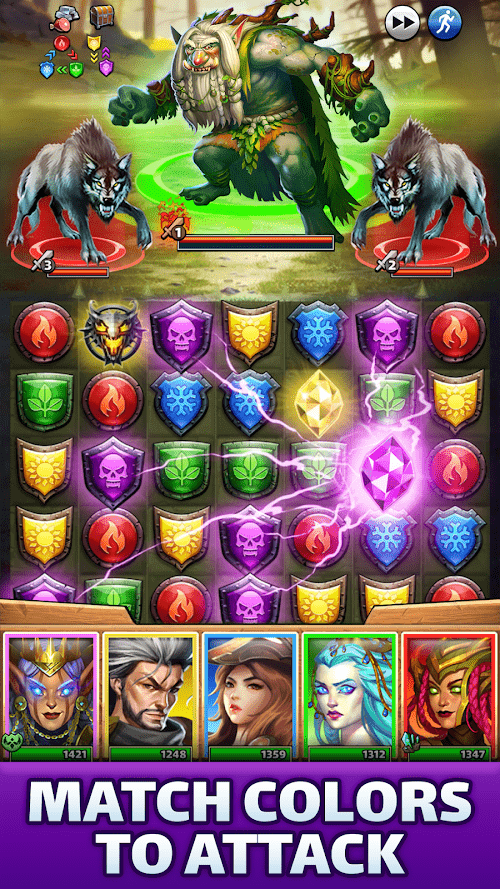 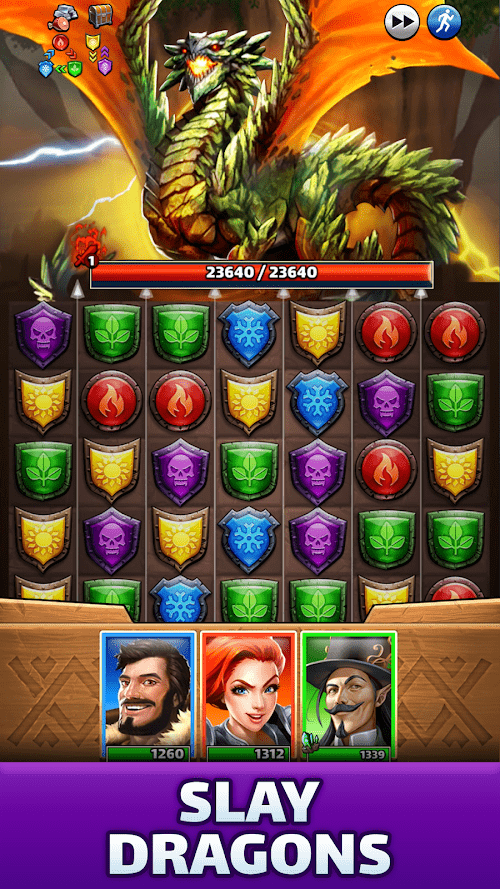 Empires & Puzzles was developed by Finnish studio Small Giant Games, and the game has a great design, user experience, engagement, and retention. An innovative take on RPG games is that it combines matching combat with fortress building, plus exciting PvP duels. In most matching RPG games, the elimination of gems of the same color will trigger related characters to deal damage to a fixed target or all enemies. Whereas in Empires and Puzzles, the removal of the gem will release the soldier from that location, which means that only enemies directly above that location will take damage.

It's important to mention that game developers place a high priority on the onboarding process of their games, which makes them very easy to pick up. Most mid-core RPGs are competing for a limited player base, and the fact that if you launch a new game you're going to have to lure players from other games is difficult and expensive. The developers wanted to make Empires and Puzzles a hit game, and the long tutorial showed the risks they were willing to take to get there. Given the plethora of games that appeal to players on smart devices, the conventional wisdom among developers is to get players into the game as early as possible. Too many tutorials, especially when players have encountered similar tutorials in other games, can cause them to uninstall the game after a few minutes. So, I think the overall appeal of Empires & Puzzles is that it's an entry-level RPG. The developers set the threshold very low, and at the same time gave it extremely deep meta elements and numerous gameplays, allowing players to deeply explore the fantasy world. This game has attracted many players, and today's RPG game fans love this game, thanks to the specificity of the gameplay.

This game has also done a good job in social aspects and game experience. Players can join the legion and complete the task to have the opportunity to get higher star cards. The game also provides PVP online battle gameplay, where you can fight against players around the world, of course, also in the form of matching cards. Unlike many mobile card games, Empire and Puzzles also add gameplay similar to SLG construction. Players can get different materials after each battle. These materials can be used to upgrade castles and build buildings with different functions. Buildings, such as resource buildings that produce iron ore, technological buildings that can train low-level heroes, etc. Of course, since the cards are divided into 1-5 stars, the payment points are mainly for players to draw cards. The cost of drawing five-star cards is relatively high. Even if you join a legion, it takes a lot of time to get these cards, and the game is similar to SLG products, you can often see limited-time promotions. STUNNING GRAPHICS - Experience nuanced monsters, magical creatures, loot, and superheroes in a majestic fantasy world in a visual feast. This refreshing free-to-play RPG fantasy game combines magical fighters, epic matching battles, and grand castle fort base building with intense PvP duels for a hearty magical action drama.

However, there are also some players who complain that this game is just "Puzzle and Dragons" or "Dream Monster" with a new art style, which lacks innovation. Indeed, in terms of the form of battle, "Empires and Puzzles" is indeed the case. In the battle, you need to create your own deck, activate card skills through match puzzle-solving, and fight with the enemy, and matching skills can help you deal more damage. Moreover, you can also draw cards in the game, and the star rating of the card will directly determine the combat effectiveness of the deck. Compared with similar games, the RPG elements of this game are relatively more complex. In addition to matching, each card has exclusive skills, which can be clicked and released after the energy is full. The cards in the game are divided into different colors, and there is a relationship with each other. Eliminating the corresponding color can attack the enemy of the opposite color, and can accumulate energy for the cards of the same color. If there is no opposite color, you can increase the energy of the hero card. After the slot is full, you can click to attack the enemy.

In short, Empires & Puzzles is an overall good RPG game. It adds matching gameplay, RPG collection and development, team battles, PVP, and other elements. It is recommended that those who like RPG games experience it.

Empires & Puzzles is a match-3 game featuring unique elements of RPG, battles, and fortress establishment. Players could challenge others in the game to gain upgraded gears. It is a mixture of both fighting and puzzle games. To make it possible for your troop to win, you need to rack your brain to solve puzzles by moving and matching three blocks in the same color in a row. Therefore, you can enjoy the effect of fantastic combos and acquire special gears like shields. There are altogether 3 seasons available for you to explore. The game has 2,233,081 reviews with 4.2 stars out of 5 on Google Play. It contains in-app ads. There are also in-game purchases available. Mild violence might be involved in the game. So parents should be cautious if their children choose to play the game because it might lead to unexpected outcomes of financial loss and misconduct. The game is free to download and install for players. The following parts will mainly focus on both sides of the coin--the pros and cons of Empires & Puzzles.

On the one hand, Empires & Puzzles is an excellent game with these amazing features. First of all, the graphics in the game is skillfully designed with extreme details. Players can enjoy the visual pleasure of observing every detail of the characters and monsters, loot, heroes, and the game world as a whole. It will guarantee an immersive experience of gameplay. Moreover, it is also a sort of a strategy game because you need to manage your own military base, train the troop and grow resources. It is a great chance for you to challenge your IQ to make the best out of your limited power. Build an invincible fortress to protect your people from the raids of other parties. Furthermore, the game also entertains players by encouraging them to start their collection of hero cards. By collecting those cards, you will have hundreds of warriors and military at your own disposal. In addition, you can upgrade your characters by training them and equipping them with mighty gears so as to strengthen your forces. Since it's an online game, you can also initiate intensive raids with players leading other empires to have great fun. Once you defeat your enemy, you can acquire tons of loot from the hand of your rivals. What’s more, crafting your own unique weapon is possible in this game. Everything in the game could be upgraded only if you want. Apart from being a match-3, battle, and strategy game, you can also experience the relaxing joy of the game by farming the land and gathering precious resources. Because the game is played online, players invite their friends or randomly pick other players to form an alliance to fight against monsters.

On the other hand, however, the game is also scolded for being too profit-driven. Despite the fact that around 100 dollars have been spent on this game, players can only stay with their low-level heroes without succeeding in attaining higher level one though it is claimed that there are hundreds of them available to players. The titans are extremely hard to challenge with as well. It turns out that the game is not that friendly to players who don’t want to spend a penny on this game as well.

In conclusion, Empires & Puzzles is a fun game feature a series of elements worth compliments. Yet it still needs the support team’s and the developers’ effort to try to stand in the shoes of the players in order to improve the game.