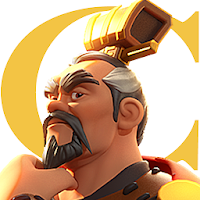 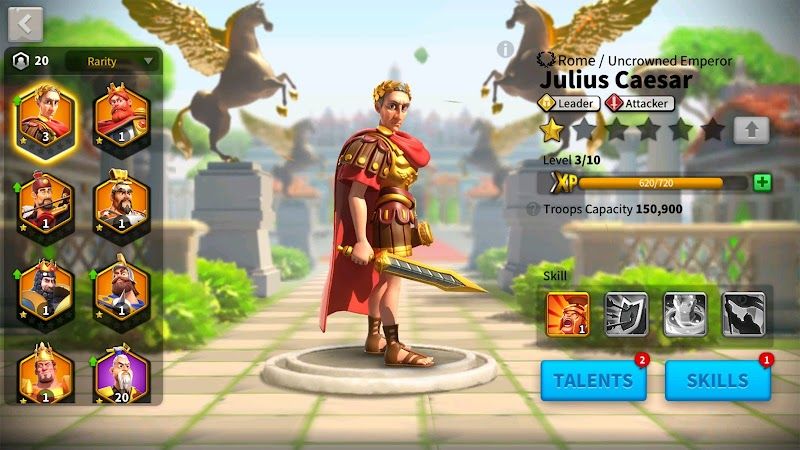 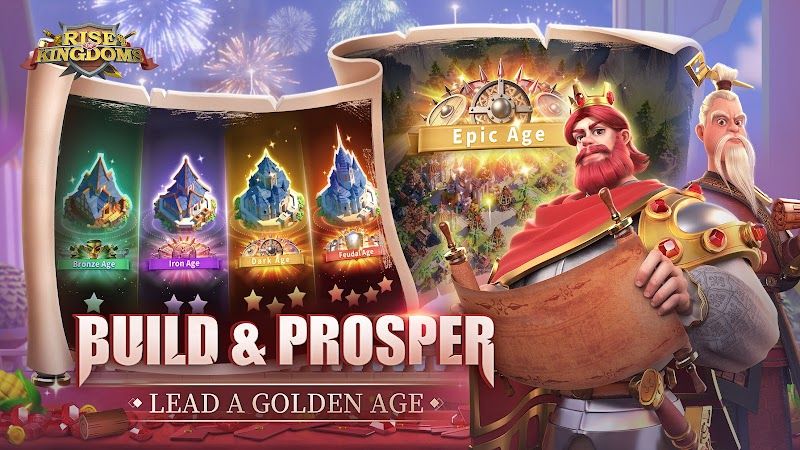 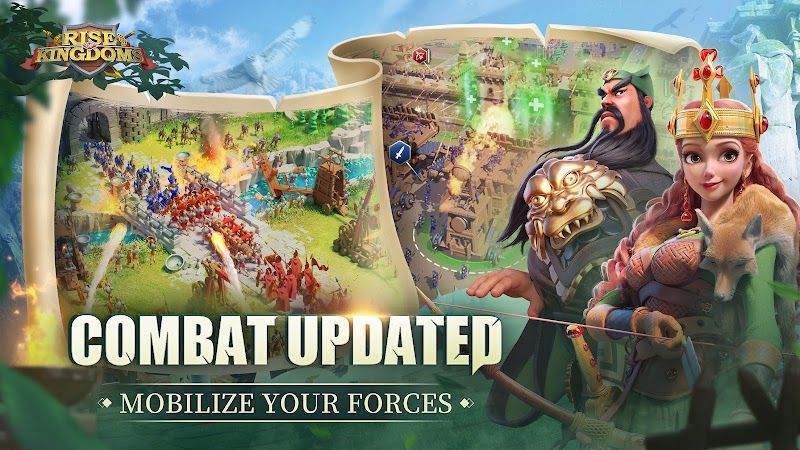 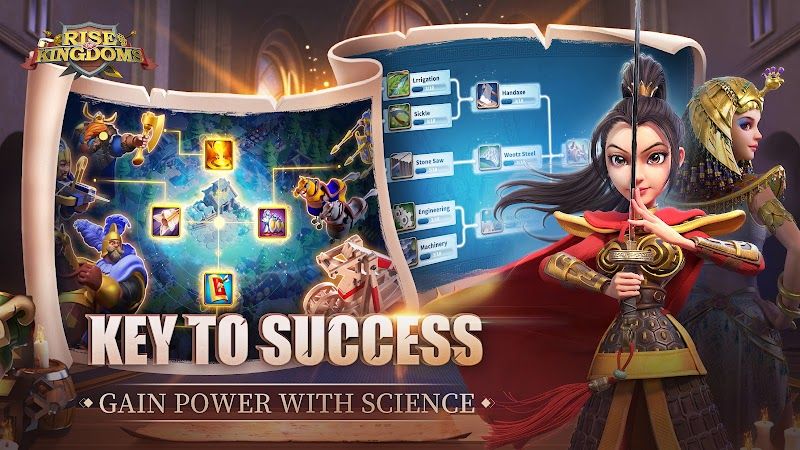 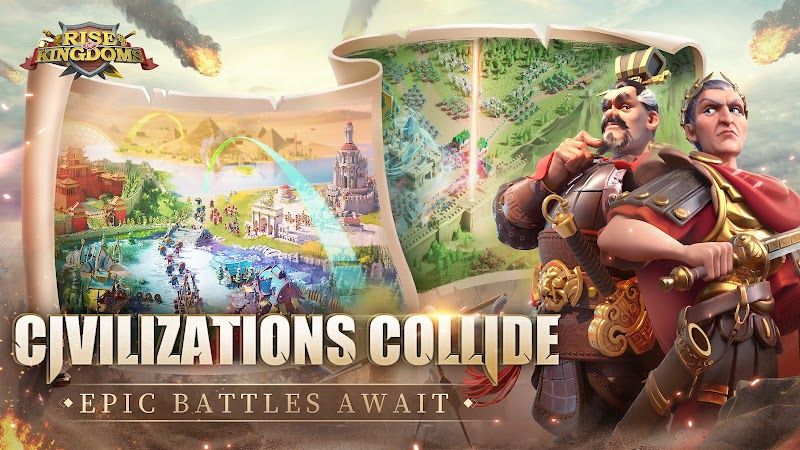 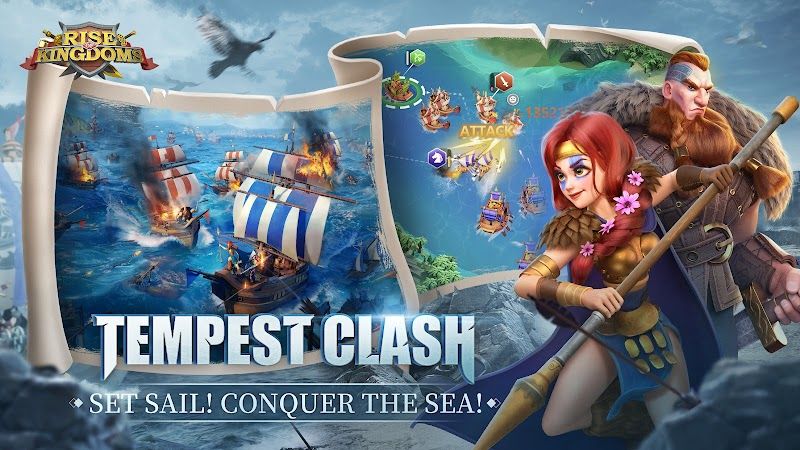 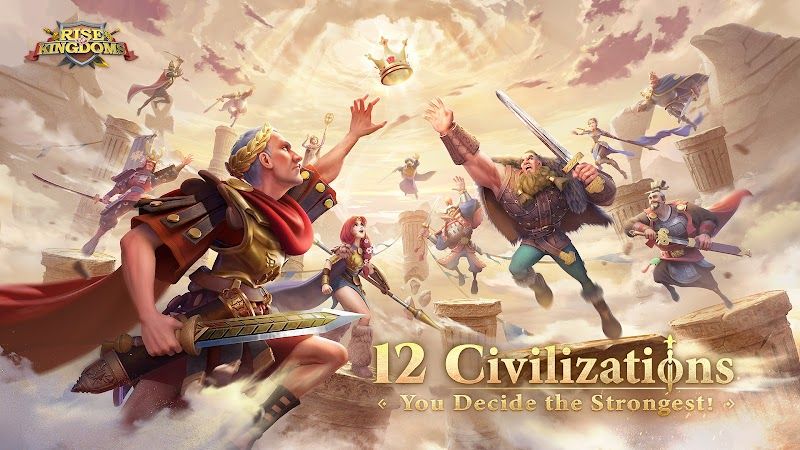 Rise of Kingdoms: Lost Crusade is an SLG game, developed by Legou Company in Chengdu, China. The gameplay of the game is mainly based on the battle of Mengmeng, calling other players to ally together. The gorgeous game scene makes players' eyes shine, and the game screen is even more shocking. There are tasks from various countries in it, which makes you more enjoyable.

First of all, this game has its game characteristics. In the game, you can gather other players to expand the territory and conquer the city. The battle route is decided by the player, and the player can beat the enemy to the bottom with the help of allies. There are also many commanders in the game, including Cao Cao, Joan of Arc, and Caesar. They are all based on historical restoration tasks, and even the modeling and dubbing are very similar. In the world map, you can see a verse nearby and move on. Each player can have a different city layout, and each city has a different architectural style as if this is the player's city.

The part of manipulating the new map makes the player's eyes shine. This game has carried out a drastic reform of the big map, and there are many bright settings in it. For example, this game enables players to manually operate troops and find their way on a large map, so that they do not need to return to the city after the expedition, which greatly increases the player's strategic choices, and the player's troops can finally be manipulated like living people. The setting of multi-troop flanking increases the importance of the battlefield location, and also increases the strategic choice of the game. Players can build alliance plots connected to alliance fortresses, and at the same time achieve competition for higher-yielding resource fields through alliance plots. This design sets a common goal for players, guides players to form a group, and enriches the gameplay of GVG. The map is gradually opened through scouts, and it feels very good to explore unknown territories. At the same time, it takes very little time to explore each time, and it also plays a role in pulling online and online. And on the big map, players will find barbarian tribes, villages, and mysterious caves, and can get rewards from technology or troops. Random events bring a sense of surprise in the early stage.

Also, some of the details are well done and deserve compliments. First of all, the free hero treasure chest can be obtained quickly by increasing the level of the tavern. This sense of growth is very obvious, which is rarely provided by other similar games. In the game, the main base will be upgraded every few levels combined with the progress of the times, and most of the building models will be replaced, giving players a deep sense of substitution. The map in the game also supports infinite zoom, players can use it at any time, making the player's game experience very coherent. In addition, NPCs will move on the big map, and players have a strong sense of substitution. There are still a lot of details like this, and it can be seen that the R&D team is very serious.

However, I think the disappearing mechanism of resources does not play its due role, which is the shortcoming of this game. There are a few remaining resources to collect on the map. Players are reluctant to collect resources for fear of trouble, and they also occupy a lot of places for new resources to be born. The experience is very poor. At the same time, there is no strength verification of resources, so that low-level players can also mine high-level resources, which has a crowding-out effect on high-level players. High-level players are also forced to increase the operating frequency, and the mining speed is determined by the players themselves, so high-level players can only play low-level players. Reduce your mining speed and experience poor. The construction progress bar will display the construction time, construction target name, and quantity in turn, so it is not convenient to check the time all the time. There is no prompt to purchase when there are insufficient props on the building page. You need to click the prop icon to prompt the purchase in a pop-up window, which is not easy to guide players to purchase. The commander upgrade page does not provide multiple-use items, and the click experience of hundreds of items is poor. On the dispatch queue page, there are locks under the two queues, but the unlock conditions are not displayed, which is inconvenient for characters to obtain too much text on the page, which reduces the expressiveness of the screen.

In general, the game "Rise of Kingdoms: Lost Crusade" is quite innovative in terms of a large map, exploration, operation, etc., and the quality of the art style is also very high. For some details and UI polishing, there are reasons to believe that the developers will gradually optimize the solution after the launch, and I also hope that this game can bring innovation to the SLG category and get rid of the stereotyped COKlike.

Rise of Kingdoms: Lost Crusade is a battle game set against a story background of ancient times. There are 12 nations with different civilizations that are at your disposal. Write the history of your civilization according to your own decisions by launching fierce wars to be the master of the whole world. You can also become a respectful leader awed by all your people. The game has 2033400 reviews with 4.4 stars out of 5 on Google Play. There are no ads displayed in the game, ensuring players a smooth gameplay experience. Also, in-game purchases are available. Therefore, parents should remind their children of the possible outcome of spending too much money on this game. In the following sections, the review will mainly focus on the exploration of the pros and cons of the game.

As for the reason why the game is so popular among players worldwide, first of all, it is because of its brilliant story background. The rich historical background of the game has educational significance for players, and players can be the master of all 12 civilizations. Summon your capable warriors to fight for the future of your nation, expanding your territory and conquering the whole world. Secondly, players can experience real-time battles with other players and check the progress on the map. You are allowed to participate in or leave the battle whenever you want. You can utilize different strategies to support your teammates and attack enemies. Thirdly, the game provides you with a pretty smooth battling experience by offering you a world map without seams. You can gain a comprehensive picture of what’s going on in your game world, preparing you to meet upcoming challenges. Fourthly, the civilizations in the game are all unique from each other with their own characteristics, varying from units, advantages, to buildings. Fifthly, you can freely explore the land of your own and carry out research to learn the land better. You can enter a variety of facilities and buildings like caves, temples, and tribes to interact with your rivals. Furthermore, the game allows you to move your military force without any restriction. In addition, you can ally with other players to fight together against powerful enemies in ways of composing strategies. Finally, tons of famous characters in history will be at your disposal. You can demand them to carry out attacks to win the battle.

Yet, it can’t be denied that the game still has its own flaws. For instance, it’s pretty hard for players to acquire enough resources to level up their troops and build their own kingdoms. It is quite consuming to upgrade the team. The rewards of the victory of some battle are also insultingly little. Also, the migration rules set many limits for players under certain ages. In addition, paid features are encouraged by the game and those who are unwilling to spend money on the game might have a tough time playing it well. Lastly, the recent updates of the festival version are meaningless in the eye of some players.

Depending on the analysis of both pros and cons of the game, we can conclude that Rise of Kingdoms: Lost Crusade is comparatively fun and challenging to play for players. Its design of graphics are amazing, and players are allowed to explore 12 civilizations playing the role of a leader who will be able to summon troops and be respected by their people. However, there are still some drawbacks that can’t be neglected. The game is recommended to those who love battle games and have plenty of time to kill. Or else you should think it twice before installing the game.