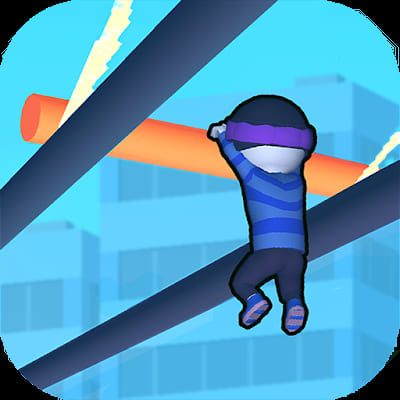 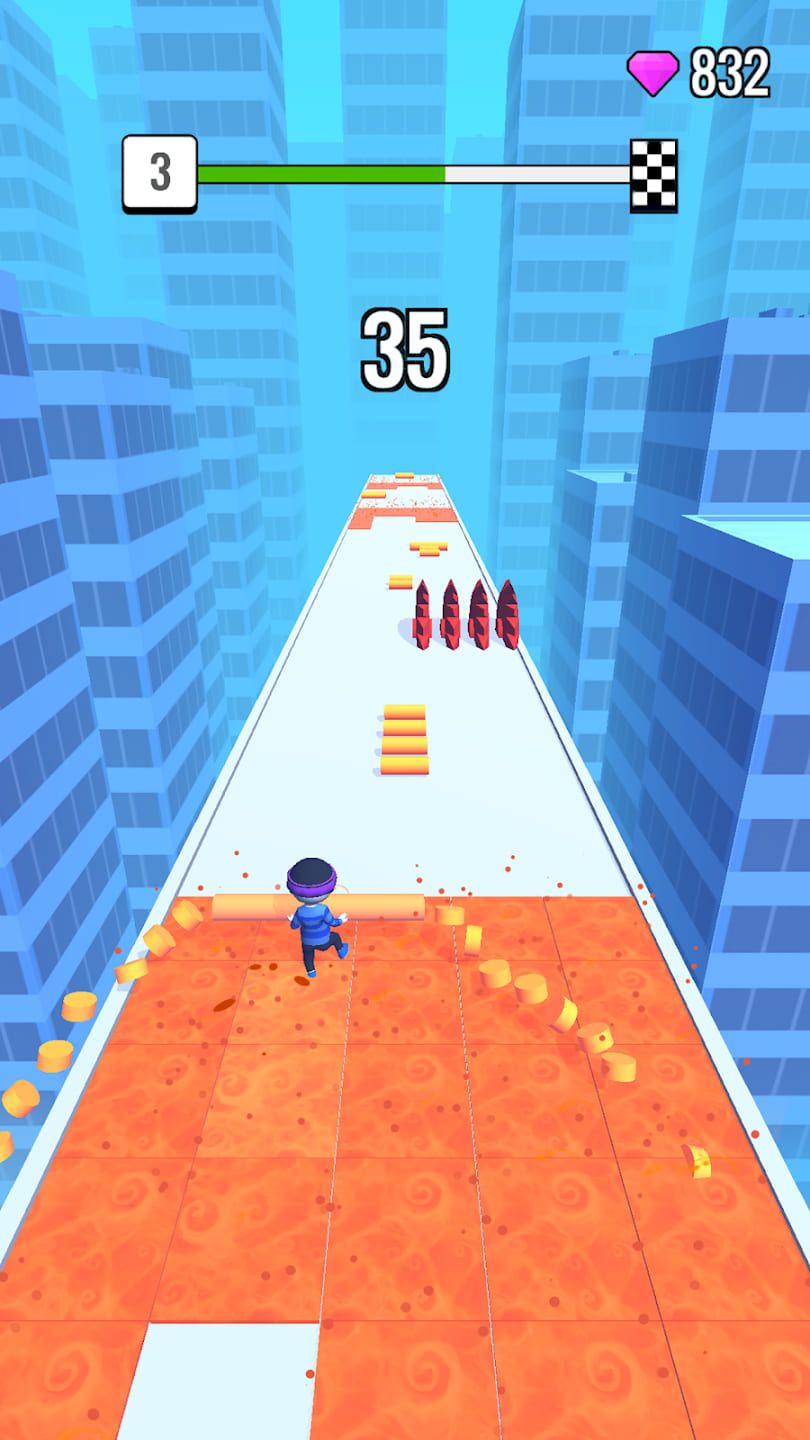 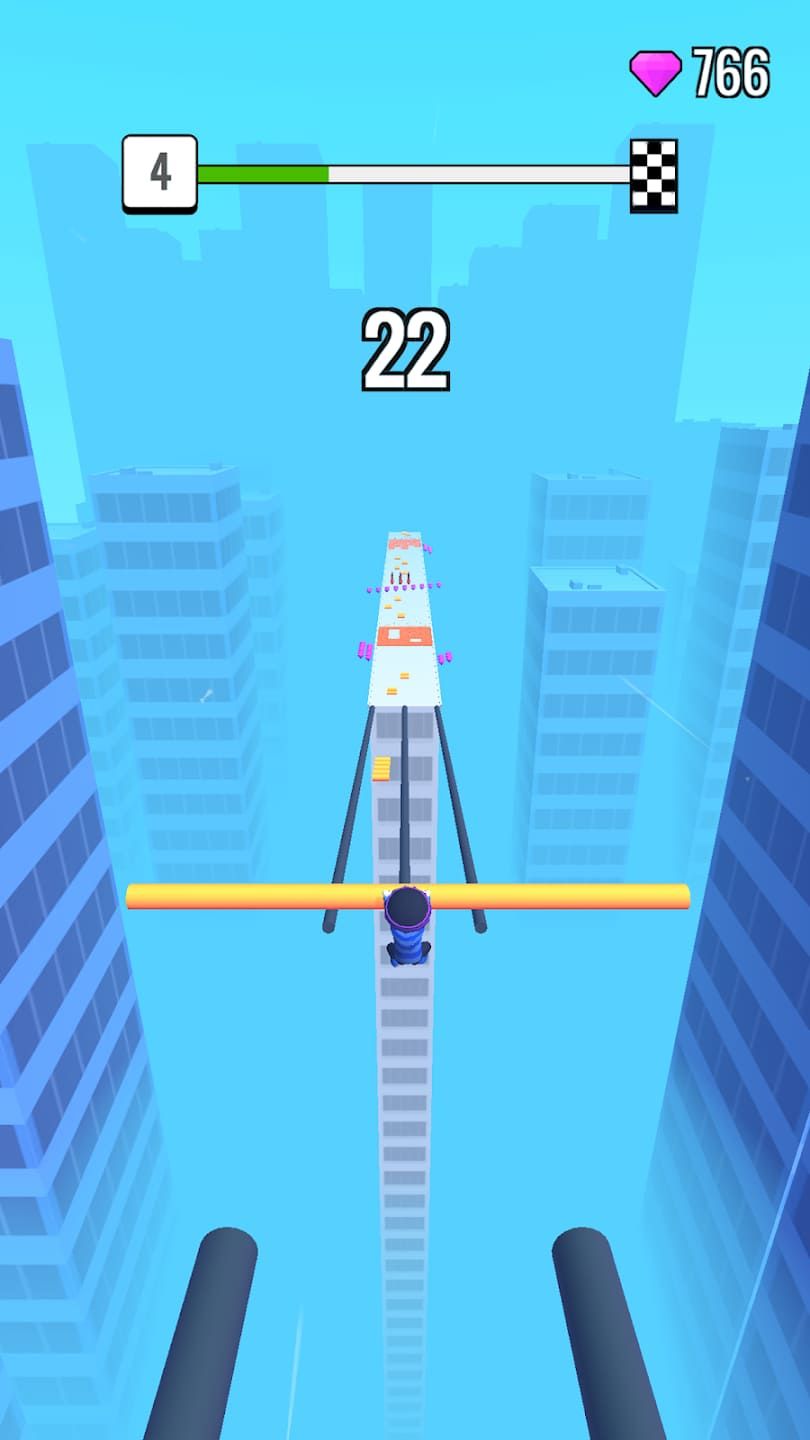 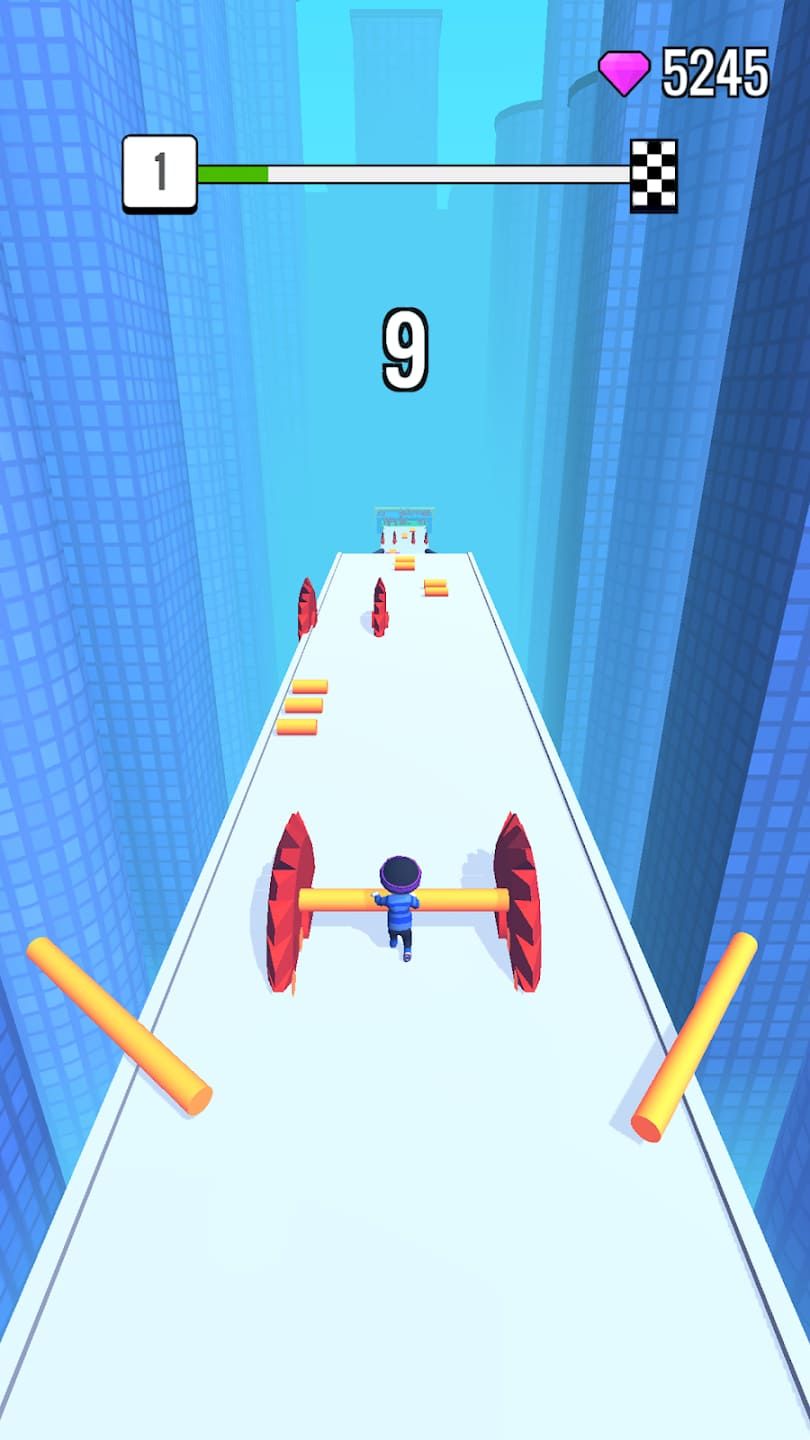 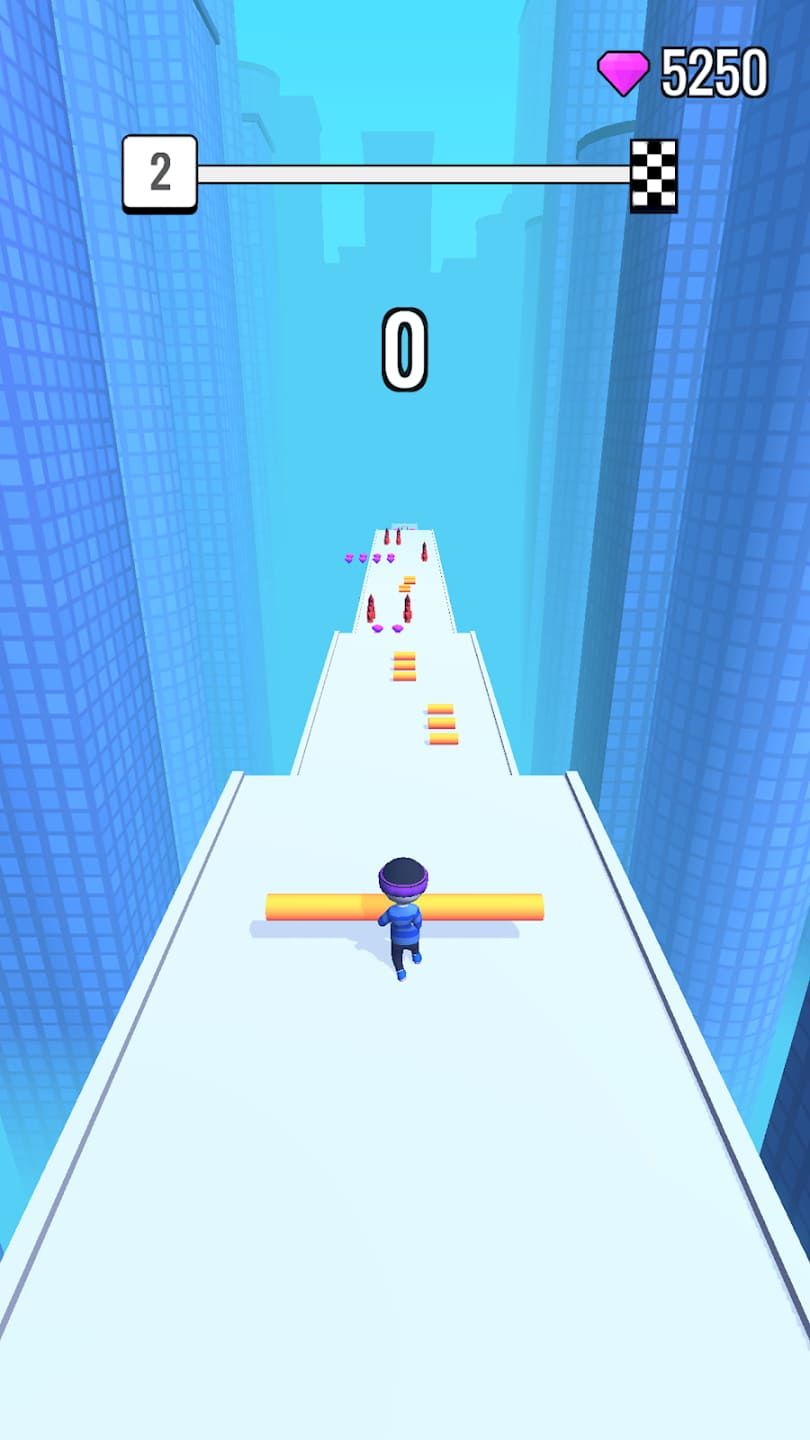 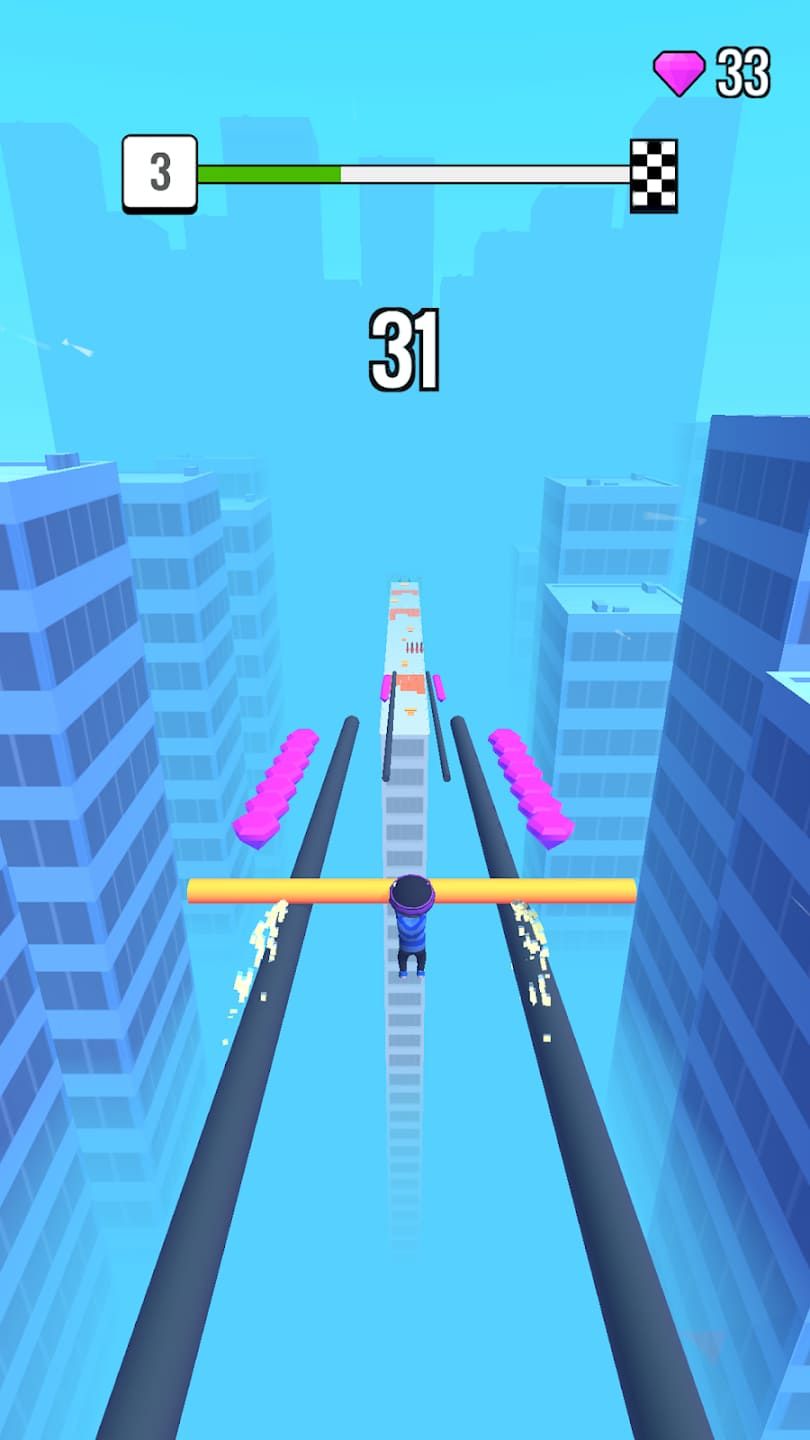 The Description of Roof Rails

Roof Rails is a mobile racing game developed by Voodoo studio and was released in 2020 on iOS and Android platforms. In this game, players run with a large log or a pole in their hands on the racing course known as the ‘rail’. Meanwhile, players are aiming to run over other logs in order to widen/extend their own logs. Just like many other racing games, speed is not a major winning factor in this game. Instead, players need to dodge obstacles and pick up useful items. In other words, players must try to avoid hitting damaging lava, dangerous buzzsaws, and other hazards so that their logs wouldn’t be shorten. The ultimate goal for players is to run through and complete each level with the largest pole possible which brings them the largest bonus.

The control and game mechanism are rather easy and straightforward. One of the two core parts of the gameplay is to avoid obstacles. The motion control and movement is quite simple and intuitive. The other part of the game is to pick up useful things including the in-game currency—gems. Players can pick up gems while they run down the rail. Besides, they can also gain extra bonus gems according to their performance on each level. In other words, the better players run, the larger amounts of gems they would be awarded. In terms of game progress, players would notice that the difficulty level of the game is gradually picking up as they move further into the gameplay and encounter more challenges. In general, players need to run from the beginning of the course to the end in order to finish a run. Sometimes, it is also possible to take a short cut when players run into a lava pit so that they would reduce their potential log loss as much as they can. As for the gems, players can use them to purchase decorative outfits to build an aesthetic style.

Roof Rails receives a generally good review and rating on major app platforms. On App Store, it is rated as high as 4.5 out of 5 stars by about 211.5k votes. Google Play saw a bit lower rate at 3.8/5. Other gaming app download websites such as Bluestacks and Yandex gave this game a 3.9 out of 5 score.

1. Simple and engaging casual games designated for mobile users on the go.

3. The levels are quite addictive and challenging.

1. The motion controls can sometimes be laggy.

2. The in-game currency is not very useful in terms of helping improve the game performance.

3. After certain level, players may find this game a bit too challenging.

Roof Rail is another typical Voodoo styled casual mobile game. It is featured by the vivid brightness and easy gameplay. Players do not need a long learning curve to understand what is to be expected in this racing game. The game mechanism is a classic formula: the character with certain object, the obstacles and the pick-ups. In this sense, this game resembles most other casual racers in game design. However, there are certain fun features such as the types of items players can pick up as they run down the course. For items like gems, players can use their pole to pick them up since they’re hang-ups. For other items such as the extensions of the log, players cannot use the pole to get it directly, but rather have to bypass them by the character. The game might seem easy at the beginning, yet it picks up rather steadily. Thanks to its engaging and addictive feature, players often pave their way through to the more challenging part of the game without feeling drained.

The Description of Roof Rails

Roof Rails is a running game in which players should grab the rails while running and take advantage of them in order to reach the next roof. By continuously collecting the items on the road, your pole will grow accordingly. Try your best to persist till the finishing point. By playing this game, players can have a chance to relax and relish themselves. In the game, all you have to do is to control the actions of the character and let him jump from one roof to another. Throughout the process, the character will keep holding a rail so that he could keep up. Your final goal is to reach the end without falling in the mid of your running. You should keep the rail long enough so it can keep you running. There are a variety of hindrances set along the course which can shorten the length of the rail if you accidentally run into any of them. Try to collect all the scattered pieces of rails so that your pole of rail could stretch further. When it comes to the interface of the game Roof Rails, the graphics are designed in 3D and of high quality. The controls of the game are also easy to learn and use. All you need to do is to swipe through the screen to control the moves of your character. The game is a rather fun and addictive game. Since the game is free, it contains a certain amount of ads. The game also contains in-app purchases.

On Google Play App Store, the game Roof Rails has been downloaded over 50 million times. It receives a rating score of 3.8 stars out of 5 as well as 155 thousand reviews. On App Store, the game enjoys a pretty high rating score of 4.3 stars out of 5 and has been commented on by 53 thousand players so far. The app store performances of this game a lot between Android and ISO app stores.

1. The game is easy to play, featuring quite user-friendly controls.

2. The rules of the game are easy to understand, and players only need to run through the course with the longest rail poles.

1. As the progressing of game, the game could get somewhat repetitive.

2. The ads in the game are somewhat bothering players.

In general, Roof Rails is an excellent time killer and could be played whenever and wherever you want. One round of it could be easily finished within several minutes so it could be a great relief for people who stress out sometimes without occupying too much time. The controls it is easy to operate and players only need to swipe on the screen in order to make the character move. Also, the graphics design is also of high quality. Its 3D graphics offer players an authentic and immersive gameplay experience. However, the game is still criticized by some players due to some of its drawbacks. For instance, though the game is easy to play and fun at the initial stage, as the progressing of game, players may find this game quite repetitive in content. What’s more, since the game is free for players to enjoy, it contains a certain amount of ads in order to make money, which is somewhat a waste of time for players to watch throughout the gameplay process. Anyway, despite the flaws mentioned above, the game is recommended to players who want to relax a bit. Parents should be careful if their children want to play this game since it contains in-game purchases.