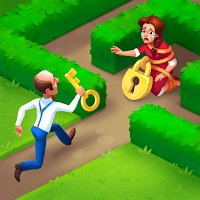 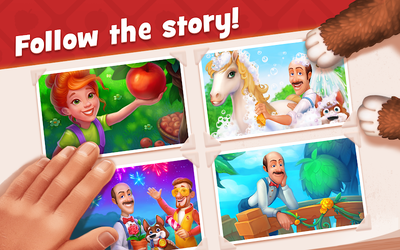 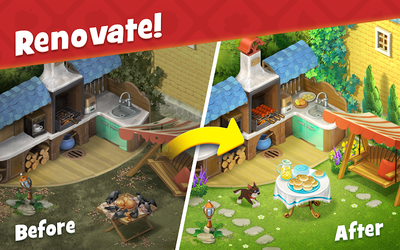 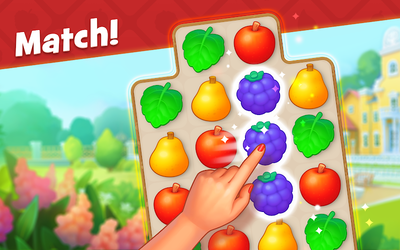 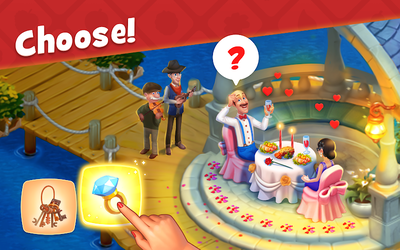 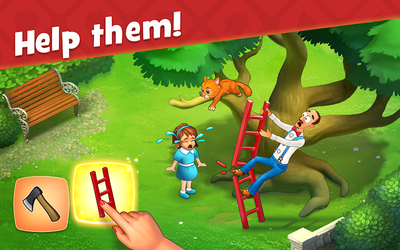 Gardenscapes is a casual game. Players collect stars to obtain resources through elimination gameplay, constantly unlock garden facilities, and decorate different areas of the garden to restore the thriving scene of the garden in the past. The game has beautiful graphics and a storyline. Lots of twists and turns and lots of fun.

Gardenscapes is a game that combines simulation management and elimination, which is very interesting. The main scene is a large, long-abandoned garden full of weeds and dilapidated, which the player inherits from his grandfather. The main line of the game is that the player inherits a manor, and there is a housekeeper to help you manage the manor. At the beginning of the game, the old butler will entrust you with a manor that has been deserted for a long time, and then players need to renovate the manor step by step according to various tasks. Friends are either neighbors or skilled workers, or the protagonist or a former good friend of the uncle. Catching up with old friends in my renovated manor is a wonderful feeling.

The elimination method of this game is also very innovative. Players need to complete various specific elimination tasks in the elimination mode. The elimination method is the traditional "three eliminations", and can only be connected in a straight line. When 4 identical fruits are eliminated at the same time, they can get artillery props. Clear the surrounding fruits, when you eliminate 5 of the same fruit at the same time, you can also get bomb props, which can destroy the fruits in a wide range around, so it is easy to achieve the goal by making use of these powerful props. Clearance mini-games You can get a star after completing a mission, and use the stars to complete various activities in the garden. There are multiple parks in the manor, and each park has a theme, such as oriental theme, fountain theme, horse farm theme, dinosaur theme, starry sky theme, etc. There are also some plot advancements when building the garden. In addition, the game also launched Halloween themes, Christmas themes, and so on. There will be league rankings every two or three days, and there will be additional rewards for top rankings. As the plot progresses, there is a dog, a cat, and a horse in the manor. We named the dog Omega, which is the electronic version of Omega, and we have to go to the competition. Earn gold coins through the game of finding hidden objects and repairing the garden step by step, and now the developer has launched a mobile game of the same name!

Compared with other match-3 games, stories like "Gardenscapes" are relatively rare. In the game, Austin, the housekeeper, will always interact with the players and cooperate with the current trend of social software. In the past, in stand-alone games, You can only communicate with the outside world through phone calls and letters. In the mobile version, a community interface similar to Facebook has been added. You can become friends with other characters in the game and learn about their lives through dynamic news.

However, this game in the mobile version is not very fun. The scene and purpose in the mobile version remain the same. The same is to help the garden return to its former beauty, but the hidden object game that originally earned gold coins was changed to a match-3 game. Maybe it's because match-3 games perform better on mobile devices, but I think that the original Hidden Objects game can make the whole game more in-depth and playable, which is a little disappointing.

In general, Gardenscapes is a fun and interesting puzzle game with exquisite style and simple operation. A variety of ways to play, and rebuilding your home by yourself can also allow players to fully display their imagination. Interested players must not miss it.

As one of the best hits from the “Scapes” series developed by Playrix, Gardenscapes is a popular casual mobile game combining both puzzles and storytelling together. It is free for downloading on iOS and Android platforms with various in-game purchase options. The game is very relaxing and fun to play with limitless puzzles levels and a large variety of decorative options and tasks waiting for players to explore in their wonderful journey of garden restoration with a groups of adorable characters. On the one hand, Gardenscapes adopts a conventional “match-3” basic gameplay mechanism for its puzzle-solving level challenges; on the other hand, it reveals a mysterious story with hidden secrets and hints as the game proceeds; on top of these two main features, players also get a full experience of garden repair, decorations and re-makes with beautiful natural themes and motifs. This mobile game integrates all these elements and gameplay well in a lite app and players can always get some cozy garden time on the go.

Gardenscapes is running on a day and night gaming circle. Each new dawn opens a new gaming circle. Players make progress of the game through beating each puzzle level which allows them to fulfill each single garden task they’re assigned. Those tasks are garden restoration and decoration related, and some of them take one while others take multiple steps to complete. Beating one puzzle level gives players one start power to take a step in tasks, such as clearing the bushes, repairing a water fountain, planting corner flowers, installing garden lanterns, changing yard benches  etc. Completing those tasks allow players to unlock new areas and upgrade garden decorations; it also gradually reveals secrets and plots through in-game conversations between characters and discovering hidden corners.

This game is very relaxing and easy to play as it is based on a familiar match-3 rule. However, what sets Gardenscapes apart from other match-3 puzzlers is the well-designed details and motifs. This game is highly garden-themed with a wide variety of decoration options and the imageries are all nature inspired with beautiful flowers and plants, as well as other natural aesthetics. What’s more, the game is also trying to incorporate social elements. Players can have in-game chats with other players and participate in competitive events; they can also give and seek help to and from the gaming community. For example, it’s encouraged to ask for free heart support from others so you don’t need to wait extra time or pay for lives to continue playing. Although some players may find this game very addictive and prone to spend actual money to purchase boosters and bonuses, it is not necessarily inevitable to do so in order to go further in to the game and plot. This is because the game also offers a massive amount of events where players can gain loads of fun and loads of extra rewards outside their main gameplay track.

What impressed me most about Gardenscapes is the range of events this game offers. There are simply numerous opportunities for players to get extra fun, extra perks and most important, to experience different themes and styles in this magic garden. Unlike most other puzzle games, this game provides so many ongoing events to keep players preoccupied. They can participate in those events as single players or with a team. Many events are regular and take place in different frequencies; there are also long lists of events with diverse themes according to different seasonal features, holidays or natural landscapes. Others events are decoration related, and they are the gems of the game because the designs, motifs and vibes are very enjoyable and players can easily indulge themselves in a fantasy-like world of natural beauties. All in all, it is a very recommendable game for all players, especially those who seek a cozy and ambient game with relaxing gameplay, beautiful designs and interesting stories. Gardenscapes wraps up all these nice elements in one total package.