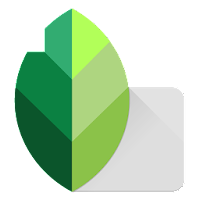 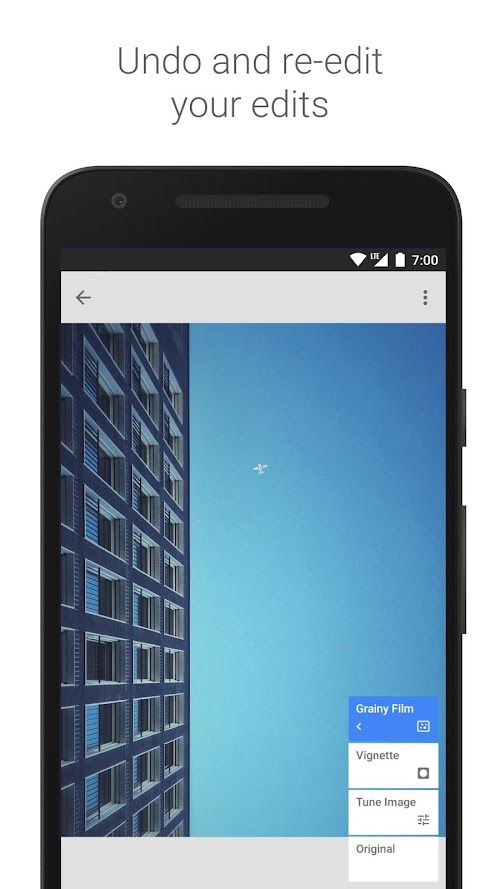 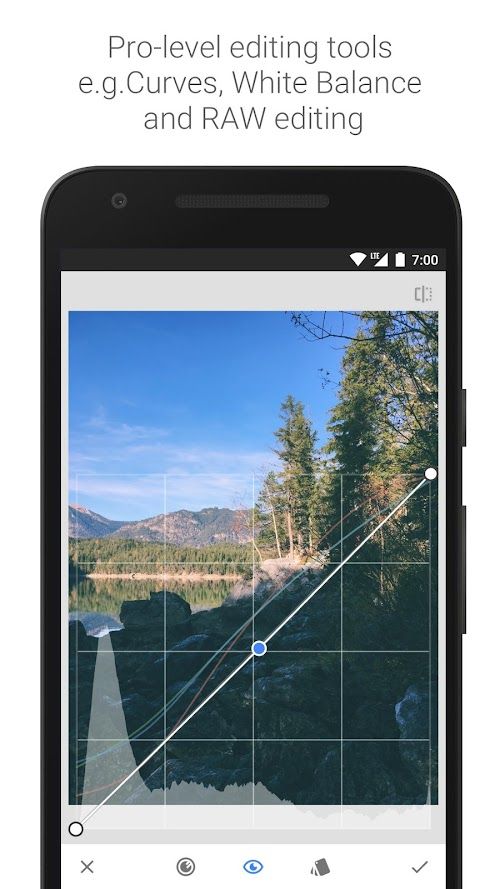 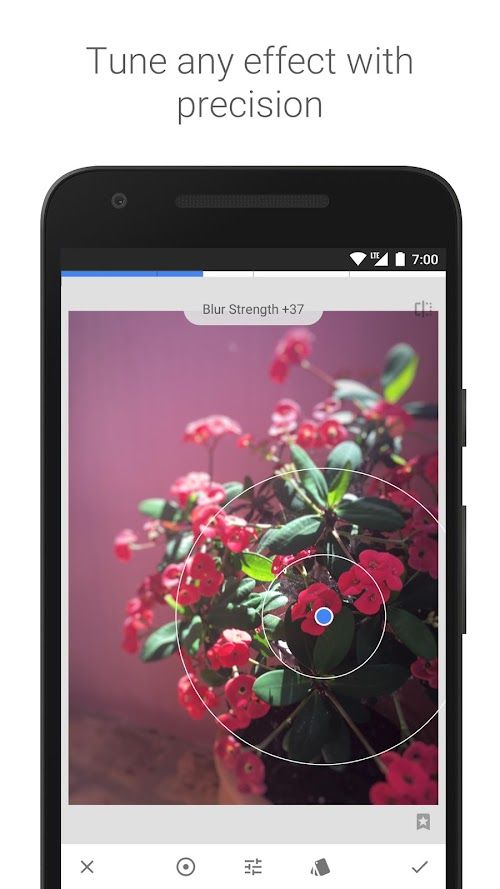 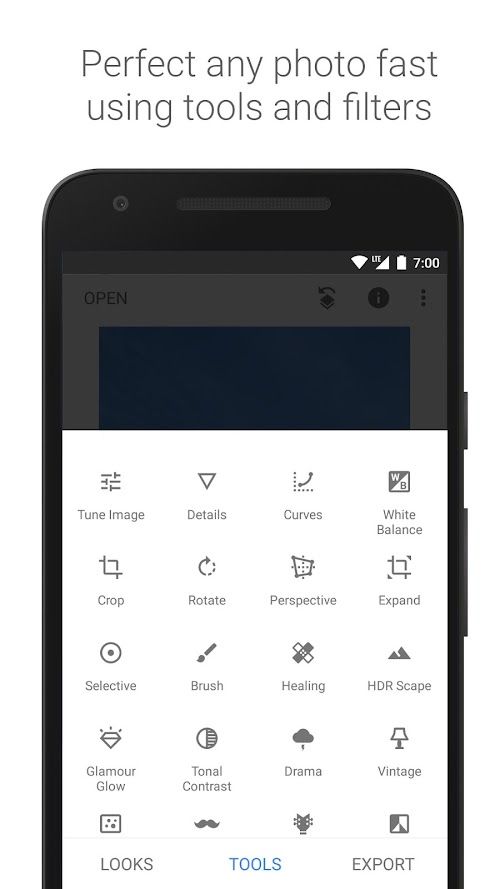 The Description of Snapseed

Snapseed's background is that it is a quasi-professional retouching app developed by Nik Software, which previously developed third-party filters for Adobe. In the early days, Snapseed once occupied the top of the Apple App Store photo editing app with its powerful local control functions and filters and was recommended by many media. And with the acquisition of Nik Software by Google, Snapseed also became a Google product.

It has high ratings on both iOS and Android markets, and it has over 100 million downloads on Google play. Rated 4.4 out of 1,499,823 votes on Android Market.

1. Snapseed is simple and easy to use and has unlimited application potential. It has long become a must-have app for photography veterans and photography rookies. It is the mobile version of photoshop, whether it is curve adjustment, color tone, contrast, detail adjustment, etc., the operations that need to be performed on the computer can be done in the mobile version of snap speed.

2. The conscience is that it has neither advertisements nor payment, and the retouching function is so powerful. You know the most expensive things sold in the application market are some image processing tools. So, it's not easy for Google to insist on making Snapseed free.

3. It has very tall, tall, and cool special synthesis effects, such as double exposure language, etc., so it is the conscience of retouching software. It is also very easy for him to get started, because the operation interface of this software is very intuitive, and most of the adjustments appear in the form of templates, so both novice and veteran can use it.

1. Snapseed's character beautification effect is much weaker, and there are fewer types of brushes. The perspective and expansion will cause some problems when dealing with architectural photos with a special perspective.

Snapseed is a free app for Android and iOS mobile devices. Snapseed was a Google acquisition designed to enhance Google's Photos functionality, and now it's a Google app with powerful photo editing filters that you can download using your smartphone or tablet. Nowadays, mobile phone photo editing software is overwhelming. I believe that every photography enthusiast’s mobile phone is full of various apps, and 64G, 128G, and even 256G of memory are not enough. Some consider Snapseed better than Instagram because It aims to constantly improve its photo editing and thus become part of Google and other software. In fact, Nik Software, the company that originally made Snapseed, has developed a wide variety of photo filters and plug-in products with great success. This is a fashion photo technique used by many professional photographers. HDR is available as a setting on many smartphones.

Snapseed is sometimes described as an Instagram competitor. This is slightly true, as both apps allow you to take photos from your phone or tablet, apply filters and share them on social media platforms. Instagram makes it easier to use dots, filter, and share meaning. Snapseed is more of a tool for artists with advanced features. This is the app you use when it takes you longer to make more advanced content. It also means Android users don't have to be jealous that their friends' iPhones have better Instagram filters.

What can you do with Snapseed? In fact, Snapseed is a photo editing app that offers filters to increase or decrease the saturation of images. It has a healing brush, vignette, glamour glow filter. Brightness levels can be precisely controlled using the Curves filter. Snapseed adds more mobile expertise to Google's portfolio. Google+ photo editing and filters are fine, but they mostly stay on the desktop, whereas Snapseed's filters are on your smartphone, where you might be taking photos, and they're more powerful.

The Description of Snapseed

Developed by Google, Snapseed features all required functions that a photo editing app should have. There are altogether 29 filters and applicable features at users’ disposal. It supports pictures in the format of JPG and RAW. Also, several different photos can be combined within one with the help of this app. The controls are user-friendly as well. You can conduct all the basic operations in terms of photo editing, including tuning, cropping, rotating, etc. Moreover, apart from adjusting the quality of the photo, you can also add extra elements to the photon in ways of inserting texts. It doesn’t contains in-app purchases and ads.

Snapseed has 1,513,593 reviews in the Google Play store with 4.4 stars out of 5. In Appgrooves, it has 1.5 million ratings with 4.4 stars out of 5, along with over 2 million reviews and over 100 million downloads. It has 7.7k ratings on the App Store with 3.6 stars out of 5. Generally speaking, Snapseed is a comparatively popular app with comparatively satisfying performance in app stores. It is available to both iOS and Android users and we can see that the app gains greater recognition from the latter group of users.

2. Add extra features to the photo, including texts, other photos, etc.

1. Some of the functions don’t work properly, such as the exposure feature.

3. Red-eye fix function is not available.

Do you often use photo editors to polish your photos and share them on social media platforms? If so, I believe that Snapseed would be a wise choice for you to use. There are no in-app purchases and annoying ads affect your user experience when editing your photos with this app. It is equipped with all the basic photo editing functions, supported by a powerful control system. You can select from 29 types of filters and other features to make your photos more attractive than what they originally looked. If you want more than the basic editing features of a photo quality editor, you can also add extra elements to your photos by inserting customized text content and adding another photo into the original one. However, despite its powerful functions, the app still has some disadvantages and insufficiency. For instance, there are no red-eye fix and photo collage functions that are used in high frequency in other photo editors. In addition, when users try to export a photo that they have to spend plenty of time editing, it might turn out that they are unable to save the edited photo properly and they can only do a screenshot with it. Finally, the app still has some bugs to fix because sometimes certain features might not work properly when users want to use them. On the whole, Snapseed is a good choice and a useful tool for those who often need to use photo editors to improve the quality of their photos. It provides you with free and convenient photo editing services that might cost some money for other apps. Therefore, the app is recommended to people who are in great need of photo editors. As for the drawbacks of the app, the developers and the customer service team should take users’ feedback into consideration in order to find solutions to those problems yet to fix.