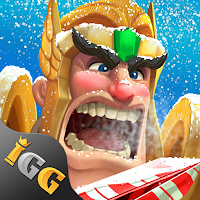 Lords Mobile: Tower Defense is the world's first AAA mobile game masterpiece created by IGG that combines real-time strategy and role-playing. The game was officially beta on September 27, 2017. The game tells that in the fantasy world, in order to snatch the throne of the king, the lords of various countries build castles and recruit various heroes to improve their military strength, to achieve the dream of dominating the world and becoming the strongest king.

As for the general gameplay of this game, players who have played business games should be able to get started quickly. There are very friendly novice teaching and pop-up system. In fact, it can be said that in the first two days of entering the game, as a novice player, you can completely follow the novice tutorial. At the beginning, the tutorial will teach you to build and upgrade buildings, and then you You can follow the guide to build buildings, upgrade, fight monsters, recruit, and teach you all the novice teaching in the early stage, and you don't need to use your brain at all. Of course, the game interface is also densely arranged with a lot of content, and the game will suddenly pop up a window for you to remind you to register or recharge with your real name, especially for real-name registration. , lest I forget that I am an adult.

The gameplay of male and female players in this game is the same. Due to the cartoon style and not enough eye-catching hero characters, people cannot stimulate people's desire to collect. Secondly, the strategic requirements of the game setting are not particularly high, and the gap between all players is not too large. The gameplay is the same. "Kingdom" also cooperated with Kurt Hugo Schneider, one of YouTube's most popular music "youtube masters", to create the new theme song "Lords" for the game, and use the form of music to drive "Kingdom" to expand its influence. In addition, the game supports many kinds of languages and even dialects. For players who want to learn English and Japanese while playing the game, you can actually use this game as a software that teaches you foreign languages and accompanies you to play. I do not know if it is because of the use of IOS. After I entered the game, I saw various languages on the world channel (is this the international server?) There are English, Japanese and Chinese, and even Spanish and Cantonese, and they also come with a translation system.

However, this game is very unfriendly to players who don't have money. Krypton gold players in the game have only one choice: to recharge and continue to recharge. When you have more money, your fights will last longer. Every fight in the game will cause serious casualties to soldiers. It is common and normal to kill millions of soldiers in one fight. The resource root time spent healing wounded soldiers is horrific. And if you don't spend money on these things, you can only fill it with your own time as a farmer. But this is not an option that everyone likes, after all, not everyone likes me to play this game as a QQ farm. Because you have worked so hard to cultivate the land for a year, if you are not careful, you will return to before liberation overnight. And there is also the fact that in this game, civilian players will never be able to beat the kryptonite players. Whoever has more kryptonite is the boss. This is the real reality of this type of game. For example, a player like me who has completed more than 70 days, if you are a gamer of krypton gold, you can recharge the money as soon as six or seven hours to reach my level of 70 days, you know that this game is not suitable for non-krypton How unfriendly the gold stall is.

On the whole, this game has a certain reflection as a slg game's strategy. The game has interesting and innovative places, and the lord's skill equipment also enriches the game content. However, due to design reasons, the player's choice is too single.

Released by Chinese developer IGG.com, Lords Mobile: Tower Defense is an online mobile strategy game that also incorporates certain elements of role play and simulation life games. The game is set against the story background where the ruler of kingdoms is absent and the world is chaotic and waiting for reunification by a powerful new leader. Therefore, the main goal of the game is to conquer the world and build your own kingdom. In order to achieve this, players mainly will be conducting two types of general tasks: war tasks and building tasks (which also includes farming). Each of those tasks integrates various options and things to keep players quite preoccupied throughput the game.

On the one hand, players are involved in military related gameplays, which includes a series of collaborative activities. Starting from enlisting heroes from all backgrounds and species, players build their own army; then they train the army, organize their troops formations according to the situation and enemies. This is where the main strategy comes to play because players must choose the most efficient formations and types of troops they deploy according to their military campaign tasks. They also need to understand the hero system quite well to make sensible decisions in matching the combats skill with personal skills of heroes when they pair troops and heroes together. Besides, players can also form a team of five heroes to take on a RPG styled pvp campaign. At the same time, players also need to make alliances with others and participate in side events such as joining a guild to resist the common enemies. What’s more, players also have access to the global Lords Mobile gaming community and challenge competitors across the world. On the other hand, players also get involved in various fun building related activities, such as farming, mining, harvesting, building castles etc. For both war and building, players need to establish their strategies to make the most of the suitable heroes with their tasks. Those two aspects of the game are cooperative and interconnected. Players need assistance and support from one game aspect to another. The main decision-making strategic part comes from the judgement and familiarity with the hero system in this game; while other tasks are less intensive and brings fun vibes to this game.

This game is mostly appreciated for its rich contents and good characters fabricated by its complex hero system. There are always plenty of things for players to do to gain a diverse gaming experience. Plus its excellent 3D graphics adds bonus to the game display. What’s more, there is a large catalogue of combat and troop types as well as tasks types. This challenges players to make correct decisions accordingly and match the event with heroes that best suit the quest. Another aspect that really catches attention is the merge of various game play styles in one mobile game. This is an ambitious attempt for developers to add in a bit of everything (strategy, RPG and SLG) yet it’s definitely worth the efforts and this combination enhances the depth of a mobile strategy game. Indeed there are some complaints from other players, such as the cheaters and robots the studio allows would demoralize and dishearten other honest players.

Nonetheless, this game still has so much to offer and in my opinion, its well-handled genre combination brings more challenges and fun to the game  at the same theme. Although it doesn’t exclude the the infamous bots in the gameplay, which might be unfair and distracted for some players, yet generally speaking this game makes a great effort and takes a great length in its game design and contents.