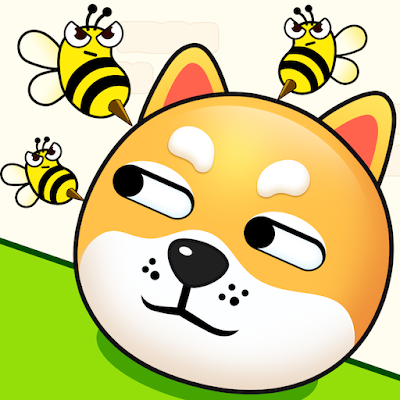 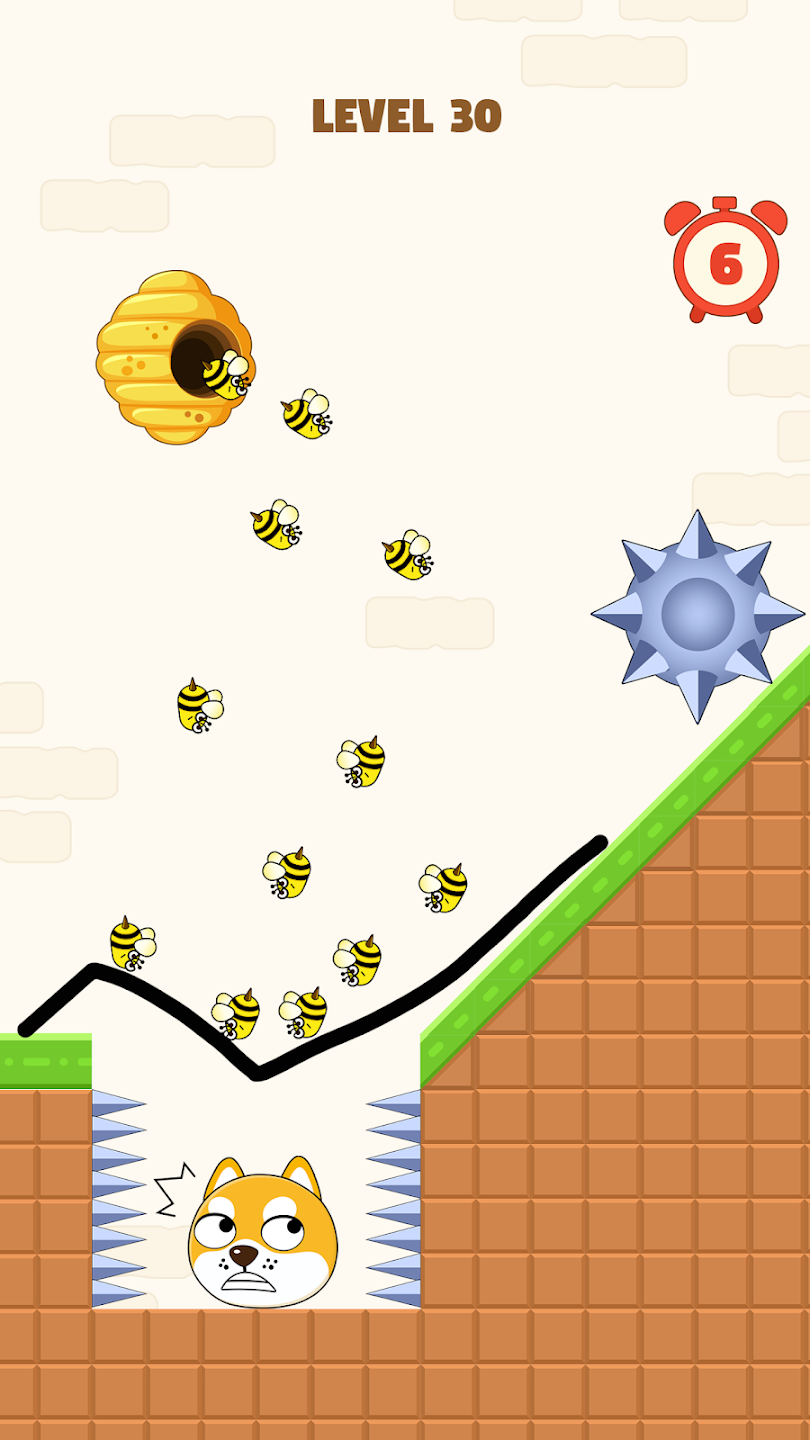 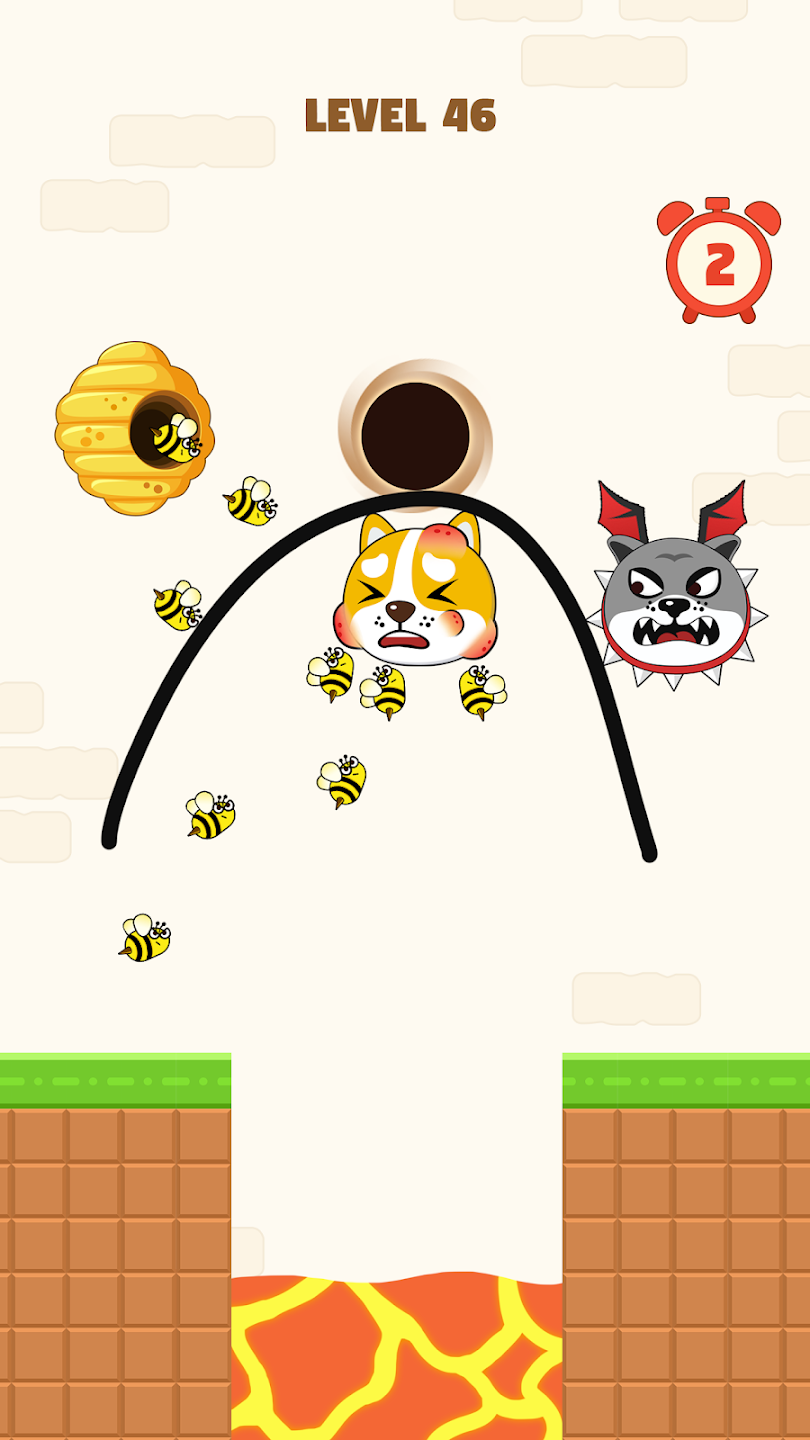 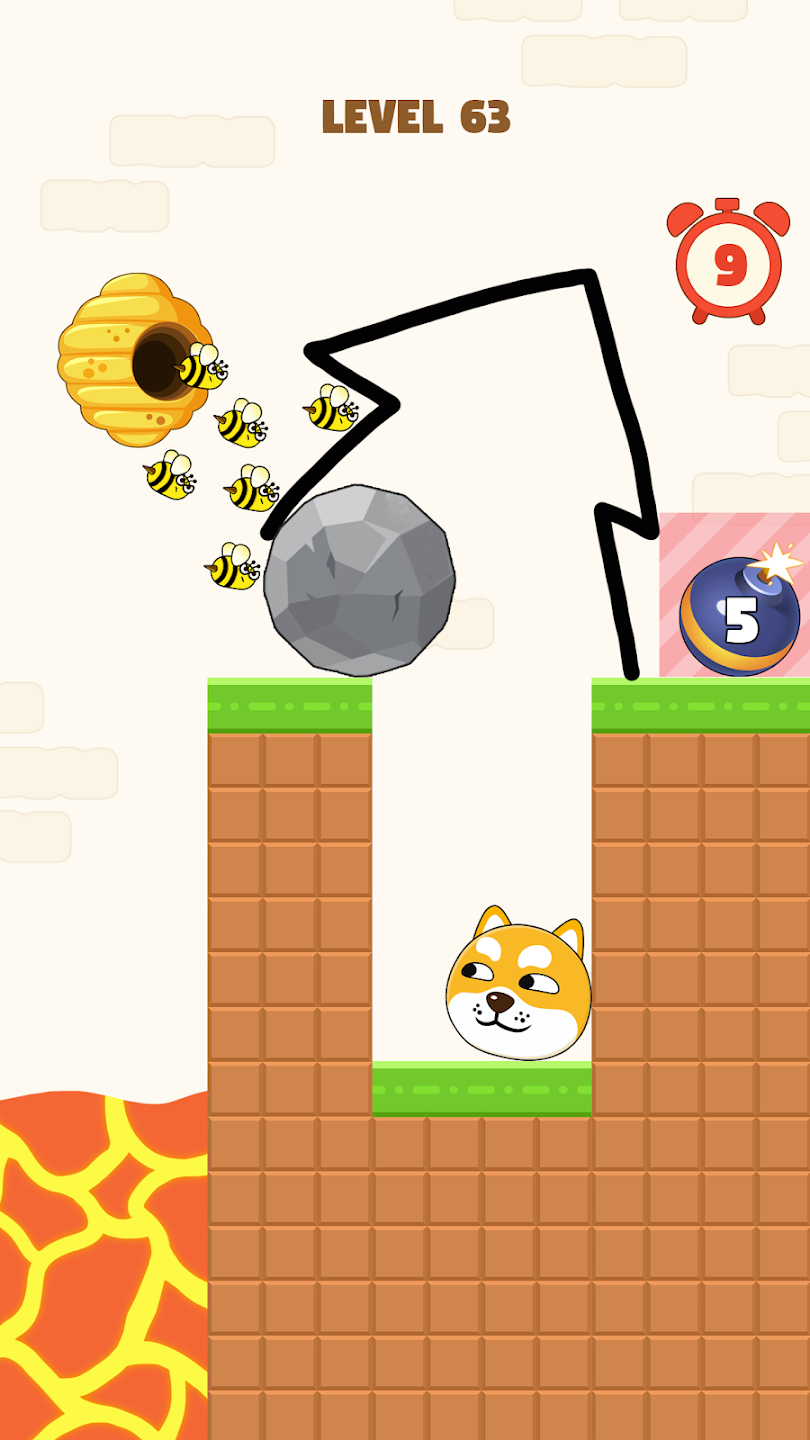 Description of Save the Dog

Save the Dog is developed and recently released by Fun Space Limited in July, 2022. This mobile game can be obtained from main stream platforms including android Google Play and iOS App Store. The game can be downloaded for free while there are also several in-app purchase options. In order to successfully download and run this game smoothly on your devices, it is recommended to make sure your mobile system is iOS 11.0 or above. The size of the game itself is rather lite with only 112.7 MB in total. Save the Dog falls into the category of casual puzzle game and it is very children/family friendly. With an age limit of 4 and above, this game can be enjoyed by many families with small kids. The goal of this game is quite simple. As its title suggests, the ultimate task is to protect the dog from the attacks of the bees from a hive. Players need to draw a “wall” to keep the dog safe from attacks. This wall should be sustained for at least 10 seconds of constant bee attack. The control of the game is to hold and draw. Players can play intuitively and draw flexible lines that circles its character. It is fun and relaxing with many funny stickers and facial expressions of the dog.

1. This game is very suitable for children and families.

2. It is relaxing and it trains the brain in a fun way.

1. Some levels might be too easy for more experienced players or older kids.

2. The ads are a bit excessive behind the paywall.

This game is a simple and relaxing puzzle games that is highly recommended for parents with young kids. The theme and goal of this game is very children friendly and the design of the artwork is simple and adorable. The funny facial expressions and cute collection of stickers can easily draw children’s attention. It is not only a good time-killer; meanwhile, it also helps to train the brain of players. Easy as some of those levels may seem, the game can actually train your brain in a very relaxing way. The game adopts a very simple control: players only need to hold and draw with their finger on the screen of their devices. There’s no limitation on the shape or directions of the drawing. Any curve would work as long as it encloses the dog and block it from the attacks of the bee. If players draw a complete and closed pattern then they can let loose their hold; otherwise, they need to hold the curve they draw for at least 10 seconds till the bees back off. This simple mechanism trains players to think creatively and coordinate their finger motions with their thought. It is particularly good for kids who are developing some major brain coordination abilities. Playing this game can help them better control their consecutive thinking,  concentration and finger flexibility. Parents can also build a fun and lay-back relationship with their children by achieving the goal together in a supportive way. The downside of the game is the amount of ads, therefore, it is recommended that players purchase the ads-free version for 2.99 dollars to better enjoy the fun drawing.

Description of Save The Dog

Save the Dog is a puzzle game for players to kill the time and relax when they feel stressed out. To play the game, you need to draw lines on the screen using your fingers in order to make barriers so that the dog in the middle won’t be attacked by the bees flying around from the hive. The attack of the bees will last for 10 seconds every round and during the attack, you need to keep the dog protected from the bees by drawing lines of walls. The game involves players’ in-depth engagement and active brain activities so as to save the doge. In terms of the method of playing the game, first of all, you should swipe on the screen to draw lines of walls to protect the doge from the attacks of bees; secondly, you should keep holding the lines within 10 seconds so that you will always keep the doge save; thirdly, once you achieve to make a protective pattern which can keep the doge secure, you can stop drawing; fourthly, after finishing your drawing, all you need to do is to wait for the bees coming out from their hive to attack your doge; Fifthly, after they come out and start the attack, see if your pattern of walls can hold for 10 seconds. If your pattern can, then you will win the round of the game. When it comes to the basic features and highlights of the game, first of all, the game features a multitude of methods to clear the bees; secondly, you can easily take advantage of the default patterns in order to win with more efficiency; thirdly, you will be able to observe the amusing expressions of the doge throughout the gameplay process. Furthermore, the game contains tons of challenging and interesting levels for players to play. Lastly, players can customize the game by choosing different kinds of skins so that they could save more than just the doge but also chicken or the sheep, making the game even funnier.

On Google Play, the game has been downloaded over 1 million times with an average rating of 3.3 stars out of 5. It also receives 8,800 reviews from the players. On App Store, the game enjoys a higher rating of 4.1 stars out of 5 together with 442 comments.

1. It provides a variety of choices for players to customize the game, including the skins and the patterns.

2. The funny expressions of the doge entertain players a lot.

3. The game is easy to understand and operate.

1. The game contains ads that might bother the gameplay experience of players.

2. The BGM of the game doesn’t flow smoothly.

In sum, Save The Dog is a good choice for players who simply want to kill their time and relax a bit. The game features a variety of patterns that can be used for players to win the game more quickly. Also, players can save more than the doge but also other animals like the chicken and the sheep. The game provides players with a good opportunity to practice their problem-solving skills. Meanwhile, the game also contains some drawbacks. For example, some players are not satisfied with the over-ridden ads while others are complaining about the background music of the game. The game also contains in-app purchases so parents should be careful if their children play the game in case of potential financial loss. Anyway, it is a fun and addictive game and is recommended to those who want to have fun.