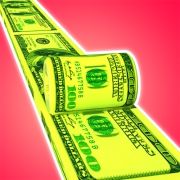 Money Rush is a parkour and puzzle mobile game, which is launched by Rollic Games. The background of this game is to collect coins of various denominations in the game, and then the game players earn a lot of profits after passing the game level. The levels are filled with traps of various basic math problems, and there are also various obstacles preventing players from obtaining high profits. Players need to control their characters to run in different scenes and collect more money. Players can choose from a variety of different tracks. Different tracks have different challenges, and the speed will continue to become faster. It is a very test of the player's reaction ability. There are many different obstacles, and players need to be flexible to avoid them.

First of all, the theme of this game has its characteristics. Money Rushing is a classic action parkour collection mobile game. It adopts the recently popular puzzle parkour game fusion mode so that players still need to choose their advantages through the comparison of addition and subtraction while parkour. This mode breaks the brainless operation characteristics of parkour gameplay and reduces the player's tired experience due to homogeneous operations. At the same time, the spinach gameplay set at the bottom of the game also greatly enhances the fun and excitement the game brings to players. Although the core gameplay of "money rush" looks more like a puzzle parkour mobile game, I feel that the spinach setting at the bottom is the essence of the game. After all, in the operation of changing the theme of parkour games, foreign R&D teams have made a lot of attempts in the past two years, from various occupations of human beings to various animals, machinery, and even anthropomorphic nail art. Come in. The spinach gameplay at the bottom is more attractive to players who are used to parkour. The operation is also very simple, players only need to swipe the screen to operate, which is very easy.

In addition, from the experience, Money Rush has three relatively excellent settings compared to similar parkour game competitors. The first is the decentralized protagonist, which is indistinguishable from a single protagonist or a multi-protagonist in similar games. The game not only divides three types of currencies, large, medium, and small but also considers the corresponding denominations for the three types; Second, the puzzle obstacles added to the level make the game more fun. After all, simple collection and parkour are simple, but combined with simple calculations on obstacles, the difficulty of comparison and selection will increase a lot. The third is the game of spinach at the bottom. The seemingly random game of spinach not only allows players to obtain higher additional income but also mobilizes the enthusiasm of players to a greater extent, increasing the driving force of trending players to play the game.

However, as for the picture scene, the picture of Money Rush is considered to be quite satisfactory, with neither exquisite and delicate patterns nor textured effects with rough edges. Although this game has made some unique designs in the game skin settings, for example, the basic skins in the game are coins of different denominations, ranging from 5, 25, and 50. In order to make the game more fun, especially added Instead of coins, skins such as sushi rolls with different skins and gears with different designs are used. On the whole, the graphics of this game are not too outstanding, lack innovation, and lack delicate depiction.

In general, if you are a fan of action parkour games, if you have a soft spot for puzzle parkour gameplay, and if you like to try simple and fun spinach gameplay, then please don't miss Money Rush.

Developed by Rollic Games, Money Rush is a casual running game available on Android and iOS platforms. The gameplay is very simple and straightforward. Players start their run with a group of coins. They will encounter obstacles and different gates as they run down the track. Decisions must be made quickly in order to doge detrimental barriers and maximize the coin multiplications or reduce the inevitable losses. As you are running towards the finish line, the more coins your end up with, the higher your final score will be. When players finish up each level, they will be shown their rankings among other players throughout the world. At the same time, they will also be given random gifts and prizes.

The game is very simple to understand and the motion control is minimal. Players basically swipe left and right across the screen to lead their coin teams navigating through hurdles and gates. Although it is a running-based game, players also need to make quick calculations and judgements when they’re in front of the gates. Those gates are different coin multipliers and minus. Each gate further divides into two passes with different multiple or minus times (e.g. -X2, X5...) players must timely spot out the most rewarding gate pass so that they can make the most out of the multipliers and maximize their final scores. Sometimes however, players might come to multiple minus gates at the same time. Then, they must do the math of less loss and pick up the gate route to minimize the coin deductions. When players have won enough coins, they can start to upgrade. There are a few upgradings that are helpful for the game performance. Players can simply accumulate more coins so they can gain an initial edge at the start of next level; or players can enhance their stats to improve their running performance. And of course, they can always spend the coins on extra special skins to upgrade the looks of their flashy coin army. Plus, the decorative upgrade can also be available through watching ads. This type of upgrade doesn’t really have an impact on players gameplay and final performance. Apart from the upgrades, players can also pick up special rewards by their random discovery of keys. When players have collected three keys, they will be able to open chests to claim some extra prizes and bonuses. However, it should be noted that to pick up keys is not your priority when you’re on the run. Focusing on avoiding obstacles and selecting the right gates is the most important goal of the game.

Undoubtedly, Money Rush is a very simple and addictive game. It’s hassle less to kick start without hiccups. It is very fast-paced yet the gaming sessions are blitz short, so players can get a well-balanced thrill and relaxation. It is less likely to burn out even the game proceeds fast. Besides, the game also integrates light-hearted and rhythmic sound effect that motives players to keep rolling. What’s more, the ranking at the end of the level connects players across the world.

However, this game also inherits some common problems. In terms of gameplay, this game isn’t really that unique from others games alike. The basic elements remain the same as runner, obstacles and gates. And the game control resembles the simple swiping as well. Other that the contents, the programming is also flawed including freezing, crashing and other technical errors and malfunctions. Therefore, I don’t particularly think this game is a must-try because there are plenty of alternatives of the same genre available. If anyone who’s interested in a money rolling racing game, this one might work; otherwise, it’s mostly a hit or miss game.