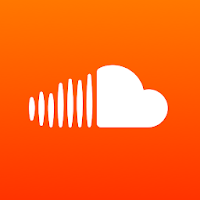 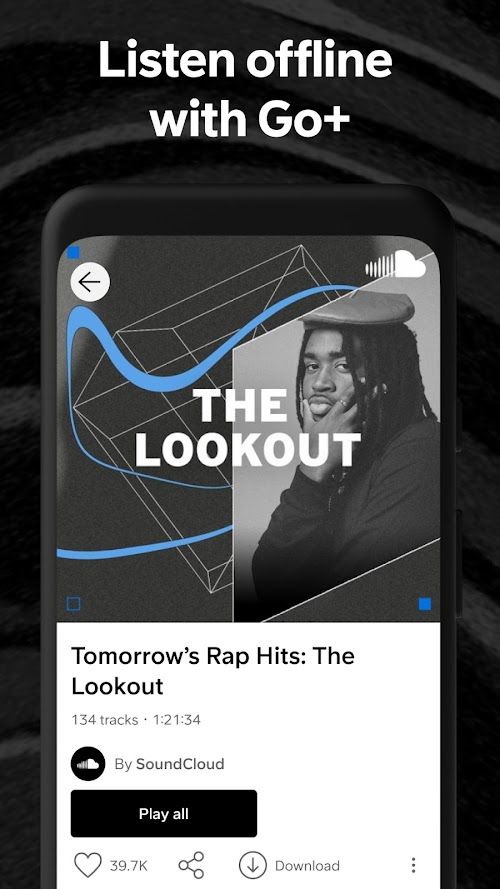 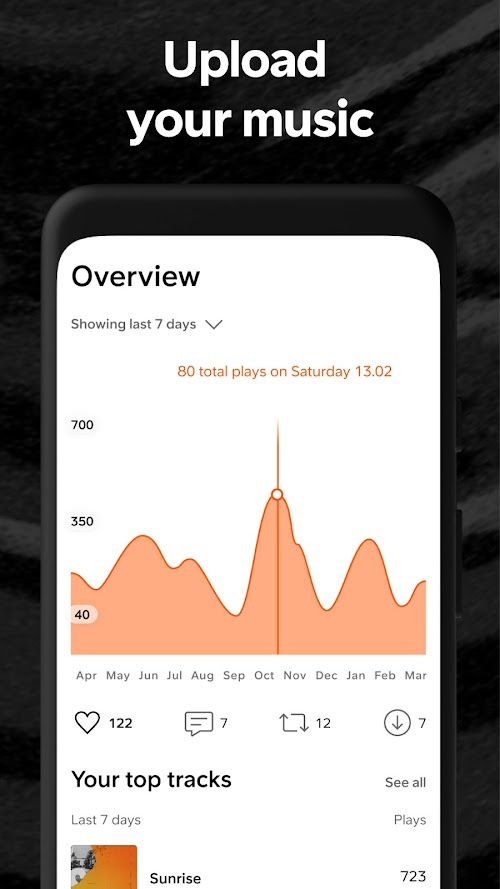 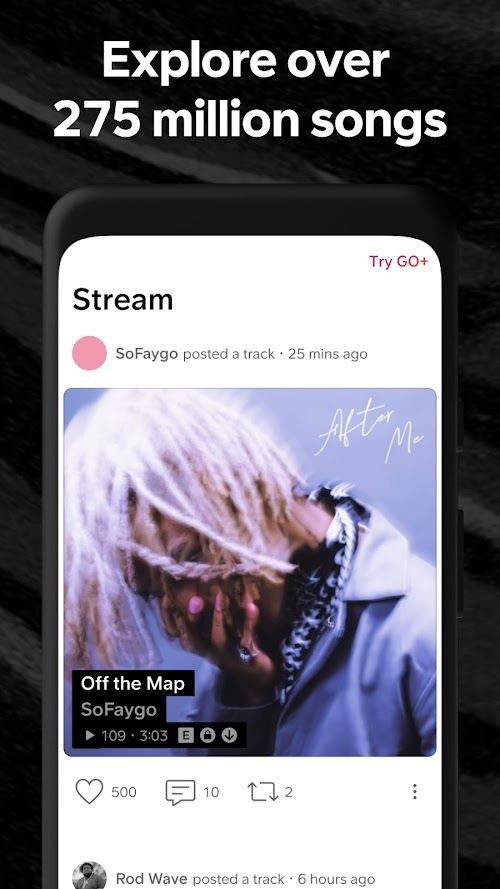 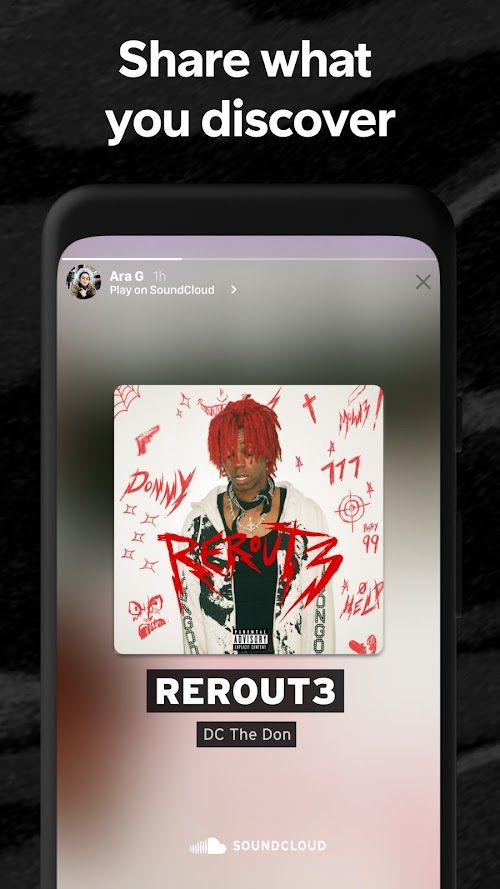 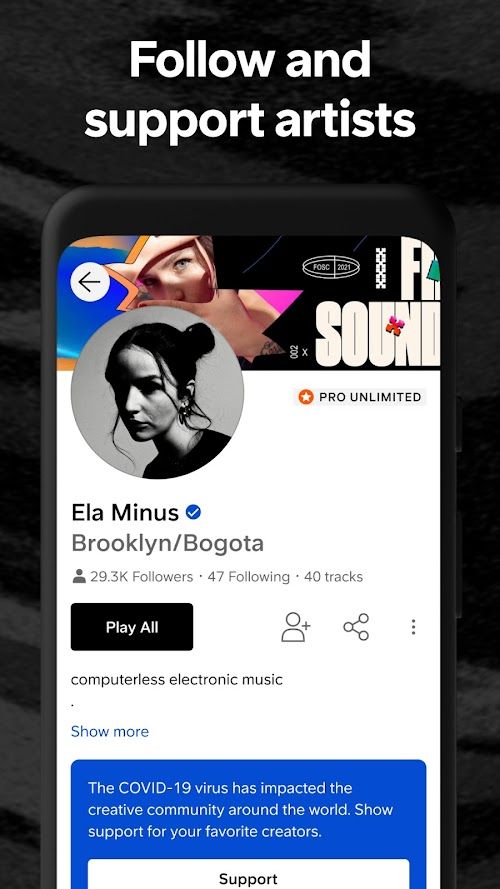 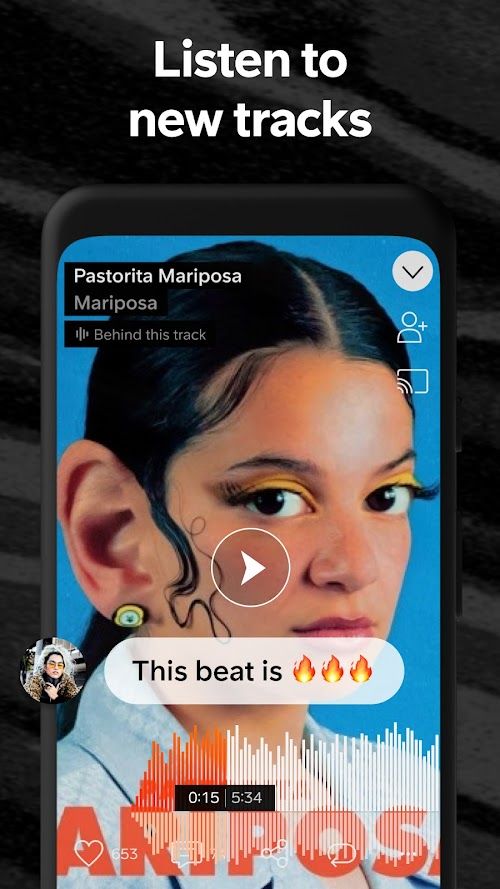 SoundCloud: Play Music & Songs review is a music streaming app published by SoundCloud. It enables users around the world to upload, record, promote and share their original audio files for free listening to other users. Users can discover and stay informed about new tracks and artists.

1. Has a minimalist design and is very easy to use

2. Support user account can be used on multiple devices at the same time

1. Music may be missing lyrics

On the SoundCloud mobile app, users can discover new popular music that they might not find anywhere else. Users can listen to their new collections based on the Suggested Tracks feature, as SoundCloud analyzes users' preferences from their favorite tracks and the ones they listen to the most. Therefore, users can listen to the works of various artists from different periods, different genres and different countries or regions. Such as blues, hip-hop styles or hits. Users can also play cool along with these new tunes and spend a peaceful night in beautiful light music. It can be said that the content that users can hear is almost endless.

The excellence and uniqueness of SoundCloud will be felt in the use of users. But here, I can directly state my reasons for choosing SoundCloud. First, SoundCloud isn't just a place to find obscure music. It also has an impressive line-up of very good bands. It has licensing deals with several studios, including Universal Music and Warner Bros. Users can hear not only new work by nascent independent musicians, but also great music from popular Adele, Taylor Swift, and more for free.

Second, it helps users discover new music quickly. SoundCloud provides users with weekly top charts in a variety of styles and genres. In SoundCloud, there will be a list of the most popular tracks on the app in the past 7 days, and users can easily find new music in high quality and popularly recognized. In addition to music, users can also find audiobooks, podcasts, and more. Additionally, SoundCloud has a graph that lets users see how many times their music has been played for the previous week or all time, and users can share their clips directly from the list.

Third, SoundCloud enables users to share music easily. Users will find options for embedding, messaging and sharing via SoundCloud, and users can simply click on a track's share icon to get started. It's very easy to share music. Additionally, users can click the WordPress code next to the embed code, by copying it, and then pasting it into a WordPress post or page. This allows users to integrate songs or playlists directly into your personal website.

Fourth, the SoundCloud community has a range of community-focused tools. It helps certain users and artists who are fans communicate directly with each other. Users can also send comments to favorite groups to share their feelings and make everything more cohesive.

Fifth, for artists, SoundCloud will get their bands noticed. SoundCloud helps artists get noticed and watched by millions. Because SoundCloud has a large number of users who are willing to find new sounds, and the social sharing function has great convenience and community participation. This is the perfect choice for budding artists.

Sixth, SoundCloud Pro helps artists make money from the music they publish. This is an important point. SoundCloud's promotional policy is one of the main reasons it has so many active users. There are many up-and-coming artists, music producers on the site who share their music in SoundCloud, and are likely to succeed with one of SoundCloud's professional programs. SoundCloud offers two premium plans, SoundCloud Pro Unlimited and SoundCloud Repost.

Seventh. It supports user music download and offline listening. SoundCloud enables users to add music to your own library. At the same time, the download song function will satisfy users who like to save their music collection locally, while the offline list function is very suitable for users who do not want to waste a lot of traffic or expect to have no network support for a long time. As creator users, they can choose to turn both options on or off. They'll need to click the permissions toggle in the edit page and mark the checkboxes next to Offline Listening and Enable Downloads as needed.

Eighth, this is the most basic. It supports smartphone app available. SoundCloud supports direct download and use by mobile users of iPhone applications and Android systems.

SoundCloud is a music app with a very clever idea. It provides a place for new artist users to share music and earn money, and for music lover users to find new and interesting sounds and songs.

APP SoundCloud: Play Music & Songs is a music audio APP. In this APP, users can find the latest and most popular music and songs, there are different music genres for you to choose from, such as rock, electronic music, classic music, house music, jazz, and some audiobooks, even Sports news, etc., users can follow and listen to this APP. And users can collect their songs and playlists to play next time. At the same time, users can follow their favorite bloggers, as well as other artists, and add them as friends or focus objects.

In this APP, many music-related bloggers and artists will share their wonderful content, and users can find their favorite trending music and audio according to different types. Users can search for song names, song artist names, or other user-related information in the search box to follow friends. Moreover, the settings of this APP are very reasonable and convenient, and users can use this APP through WiFi or traffic. But when you are listening to music, you can also lock the screen of your phone, and you can still play, pause and play the next song even when the screen is locked, which provides great convenience for users.

In the app store, this app has a rating of 4.7 and a total of ‎5,584,804 reviews. Among ‎free ‎entertainment APPs, this APP ranks very well.

1, This APP has a very rich music type for you to choose from, different types of music and tracks can be found in this APP

2, Not just listening to music, users can also create their sounds and music in this APP

1. The music of this APP is sometimes not updated promptly, and users sometimes need to wait for a few days.

In SoundCloud: Play Music & Songs, users can constantly discover their favorite music and audio. This method is also very simple. Users only need to look for the trendy music and audio of their favorite types in the browsing area, click the like button, and you can mark the song you like and save it into the favorite list. After that, the user can automatically play the music in this list, which is very convenient and fast.

Players can find their favorite songs and artists on the search page at any time, follow them, and hear new music released by them. Of course, in addition to listening to other people's music, users can also record their voice or audio files in this APP. And users can share it with others through social platforms such as Facebook and Twitter. Users can also add their own recorded audio or music to favorites, or create their favorite lists and share them with their friends or fans. So this APP is also a social function APP to a certain extent because it allows you to interact with your fans or friends, especially those fans who have common hobbies, you can share the latest music, and so on. The audio created by the user in this APP or the audio he likes can be shared with other friends, for example, it can be shared with other people through blogs, Facebook, Twitter, and other platforms. Users only need to share the link, and other people can listen to the content you share by clicking the shared link on other platforms, so it is very convenient.

Not only that, but players can also log in and register with their Facebook or Google account when registering the APP so that you can easily retrieve your Facebook or Google friends, and you can find out what they are using in batches. The friends of this APP allow you to have a deeper connection.