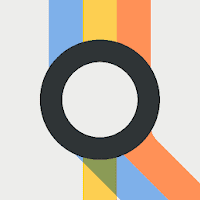 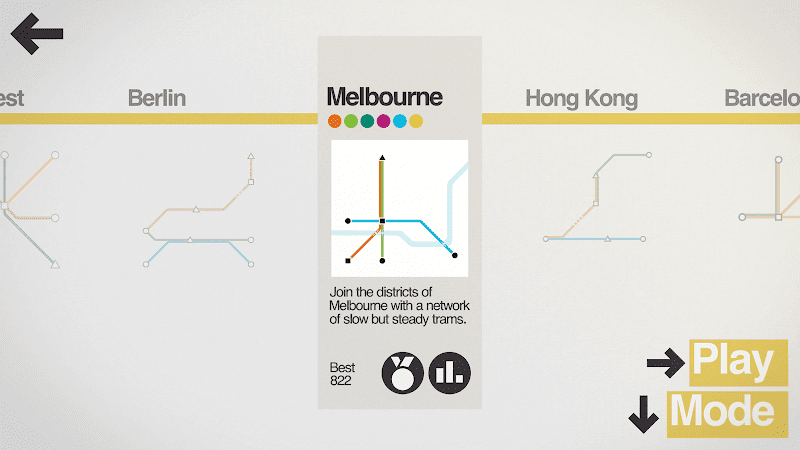 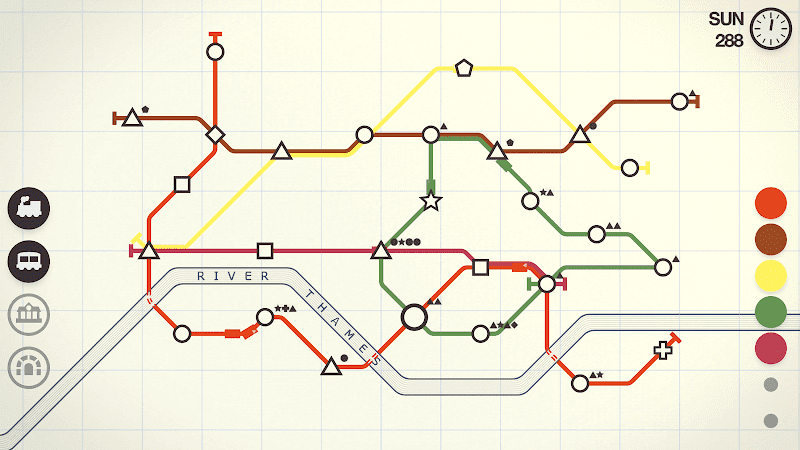 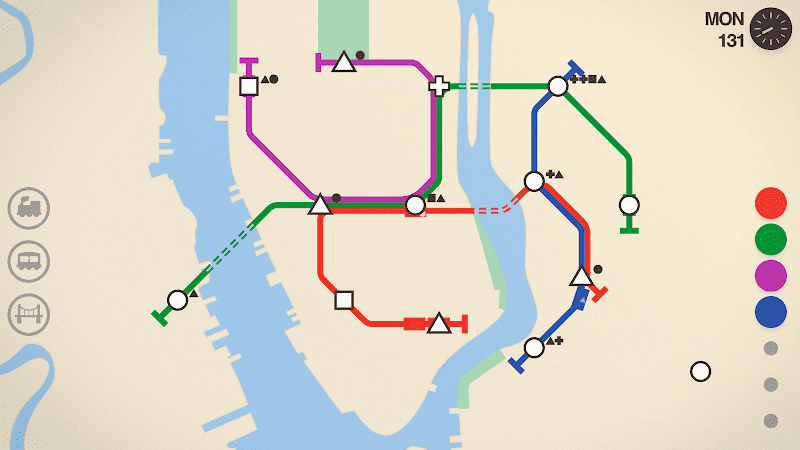 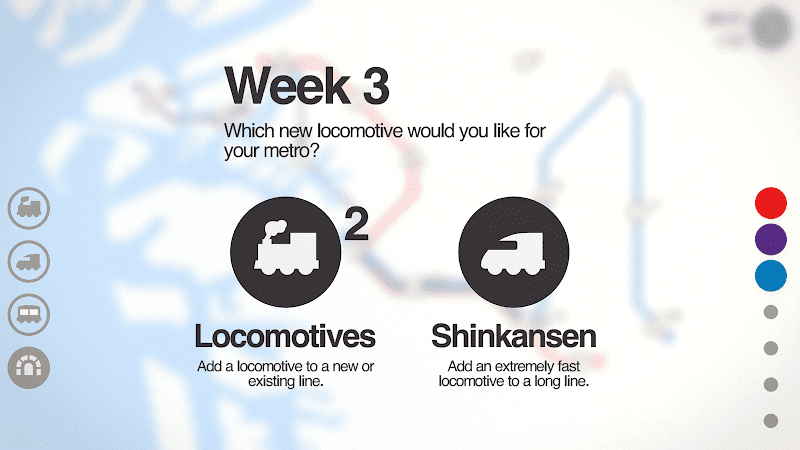 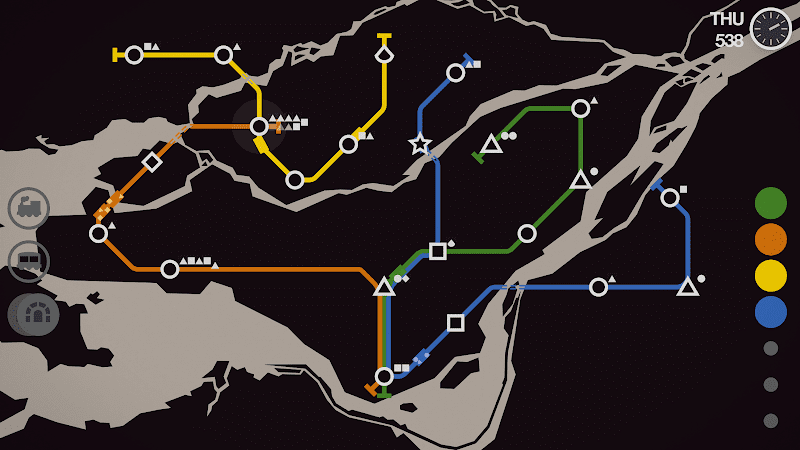 Mini Metro is a strategy puzzle game released by Dinosaur Polo Club. In the game, players need to play the role of subway designers and use tracks to connect subway stations together. It's a great game that gives players an idea of how the subway map is laid out. Players need to build a functioning subway system for each location by placing lines at various stations. It's important to note, however, that the number of resources available to players is limited, but if the player survives each week, the player will gain additional ways to improve the system that may be much needed. While it's part sim and part arcade, it works well here. In addition, Mini Metro's picture is also very artistic. The minimalist style it has is abstract in the true sense. The entire game consists of only colored shapes and lines.

The subway system in Mini Metro is represented by a bunch of colored lines. Each site has specific shape markers. Over time, players will see the station spawn passengers, which appear as smaller shapes. Each passenger has a shape associated with the station they want to go to, and at the same time, as their destination. The player starts to draw the lines connecting the stations according to the needs of the passengers. The lines drawn by the player represent the subway tracks in the game, and each line starts with a train. The train then automatically travels back and forth from one end of the line to the other, serving as a train to pick up passengers to stations along the way. But players need to be aware that while each line can connect to any number of stations, the total number of lines a player has is limited. In addition, every train has passenger restrictions, and no additional passengers can be picked up until the passengers who have boarded have disembarked. Over time, more stations will appear in the game, and players need to keep expanding your subway network. If the player designs the speed too slowly and the waiting passengers become impatient, the player may lose.

The game also has some interesting mechanics, first, players can upgrade every Sunday and choose between adding an extra line or increasing the passenger capacity. These upgrades help players take a little less stress from in-game difficulties. Second, Mini Metro normally requires players to last 10 to 20 minutes, but it also has an endless mode. In this mode, no matter how long the passenger waits, the player will not lose. If the player loses a normal match, the player can choose to switch to endless mode and continue the game from the moment of loss. Also, the game has an extreme mode. Here, every decision the player makes is the result. Once the track is laid, the player cannot change it. This also makes this difficult game very difficult. I'm sure players with mild gaming masochistic tendencies will really appreciate this feeling. Finally, Mini Metro also has a daily challenge mode. In this mode, a specific city is selected and then all players compete, and the game generates a global leaderboard. It ranks according to the number of passengers successfully transported by participants. This is a good choice for players who like to challenge other competitors. One of the most interesting points I'd like to mention is that players can't win a game of Mini Metro. The key is to see how many passengers the player can successfully transport to their destination before the player's subway network overloads and crashes, meaning the game doesn't win or lose only results. It all sounds simple, but that's the beauty of the game. Players can easily relax here.

Overall, I think Mini Metro is a cleverly designed fun puzzle game. It has a simple yet ingenious mechanism and an extremely serene ambience with a minimal yet comfortable look. If you want a game that can relax and exercise your brain and composition design, Mini Metro is worth your download.

This game is a drawing game. I feel that this game is for railway fans like me who liked to draw maps and routes since I was a child. I played it off and on for half a year and found it interesting.

First, in this game, the player's tasks are both simple and complex. Players can play according to the requirements and prompts of the game system, or else it is boring. In the game, if we want to increase the line, change the line, add the car, and micro-manage, it is best to pause. Use fast forward for points below 500, and normal speed for points above 500. It’s okay to increase the line. At first, it was a stupid way to change the line or reduce the station. I retreated the line from the starting station, but later I found that I just need to click and hold the station I want to pull, slide it in the vertical direction of the line, and then let go. Sometimes changing the line will point to a vehicle, don't worry, press and hold and drag the vehicle to the edge of the screen and it will turn gray and it will not be messed up. Sometimes it is easy to make mistakes when the vehicle and the station overlap, so it is better to zoom in on the screen to operate. The micro-manipulation in the game is that the passenger flow is unevenly distributed on a long section of the line. Some cars manually turn around or drag them to the other end of the peak line after passing the peak section, which is similar to the real shuttle bus. This will be used later! But pay attention to dragging the front of the car, otherwise, it will be hard to pull the car away and get it back. It is best to use a dedicated line so that it is not easy to mess up. According to some answers, Osaka simply left a line and used the Shinkansen to transport people point-to-point. I have never used extreme micro-manipulation. I will try it next time. This gameplay is suggested to be put into the question of "what gameplay did the designer didn't expect".

Secondly, this game trains the player's planning ability and strategic choice ability very much. Regarding route planning, players must decide according to the requirements of the system, and the randomness of the stations makes it impossible to completely follow their ideas, but the principle of proximity is required, and the efficiency of the two stations is too far apart. For the level that crosses the river, I prefer the big loop line or the U-shaped line. The regular customer source is solved on one side, and the special customer source is pulled to the transfer station. The number of line stations is not afraid, and improving the transportation efficiency is the key. It is said that the choice of new resources every week is a university question. I prefer to choose the carriage. The importance of the route is slightly weaker than that of the carriage, and the investment is slower than the carriage. Tunnels and bridges must be forward-looking, and they should be selected when there is still time left, or when the communication channels between the two sides of the Strait are expected to be overloaded. From the pivot to the later selection, it seems that the carrying capacity is 20+, which is quite powerful, but it is not used in the early stage, and the position of the pivot cannot be seen in the early stage. The locomotive in Osaka is better to choose the Shinkansen because there are many stations, and the efficiency of the Shinkansen is higher than that of ordinary cars. Some levels can be selected according to the achievement requirements, but they are always screwed out, such as the old exit lines and tunnels in Auckland, and those who do not leave the carriage will start over.

However, this game is time-consuming. In the game, players don't have a whole block of time for thinking, because it is always easy to be interrupted. I have had the experience of playing the mini subway when I took the real subway and ended up taking the station. Sometimes the requirements of the system are helpful and prompt for us to make reasonable wiring. For example, in St. Petersburg, you will find that the special points can be connected in series on a line, which is in line with the achievement requirements of the tunnel. But some are pure nonsense, such as Cairo and Berlin. These tips are pure to increase the difficulty of the game, but they cannot give us tips and help, and finally make people want to drop the phone.

On the whole, this game is a great exercise for people's planning ability and mathematical thinking ability. If you want to improve your skills in this area or want to see how subways work around the world, then this game is for you.