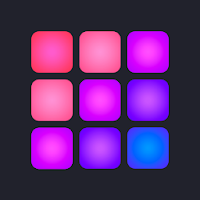 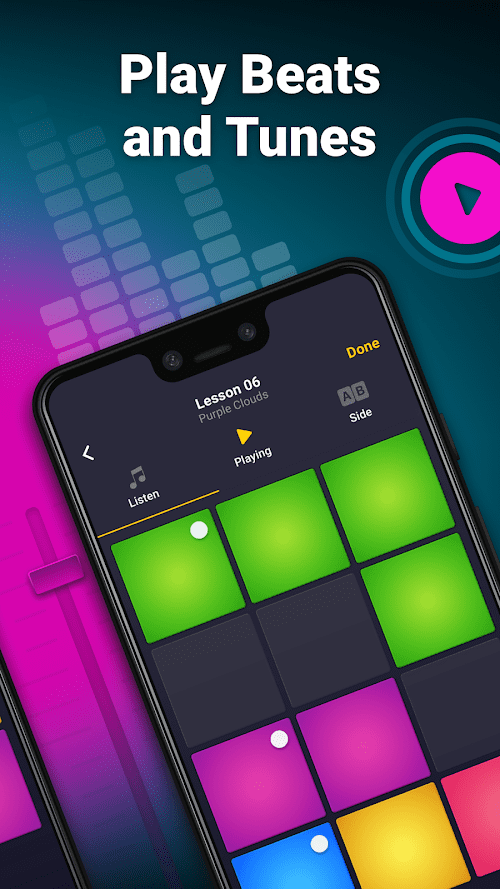 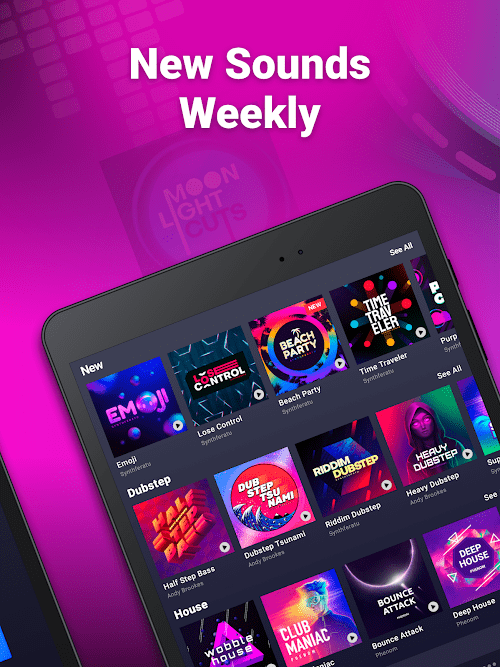 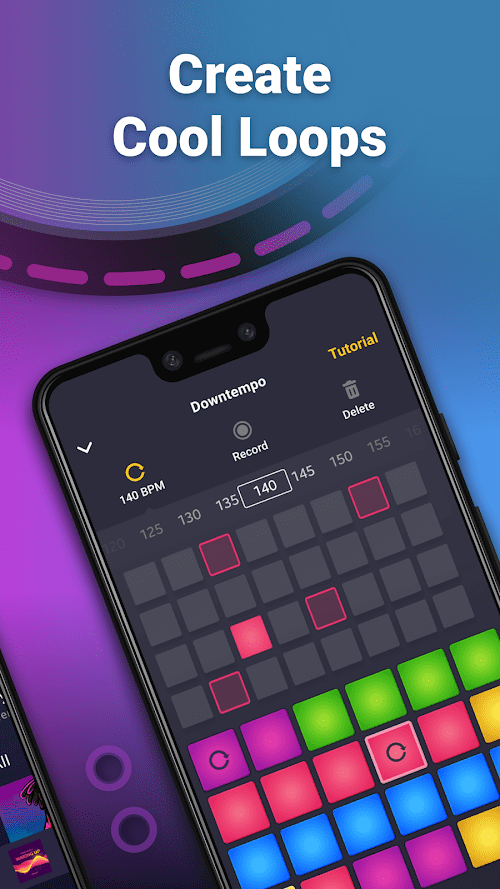 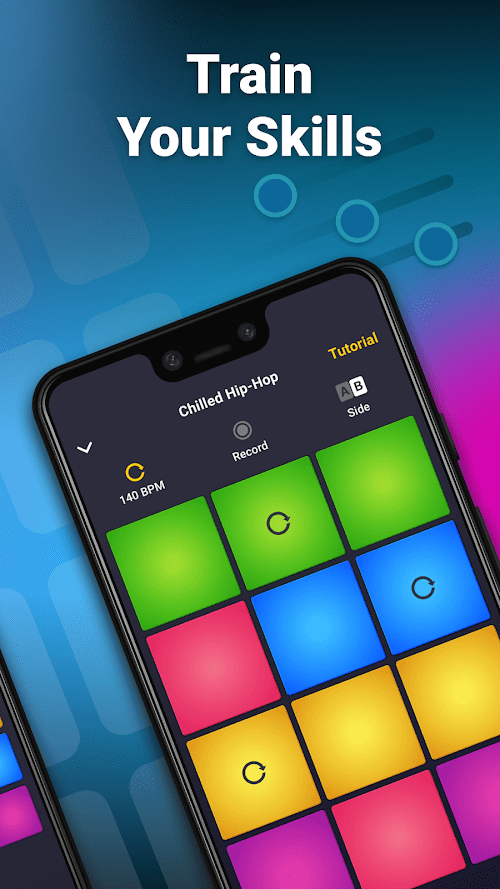 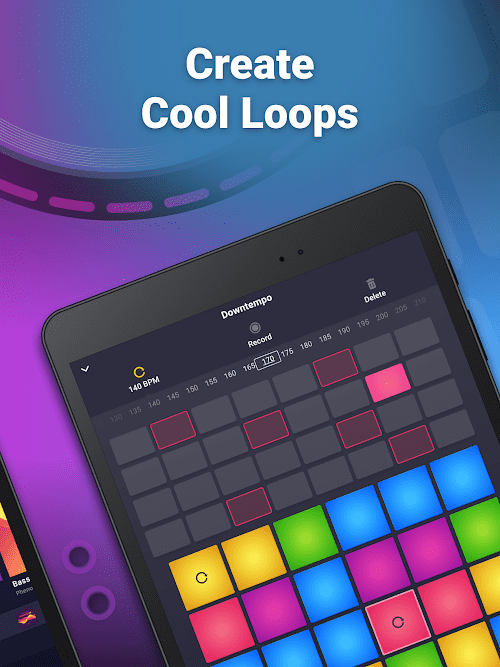 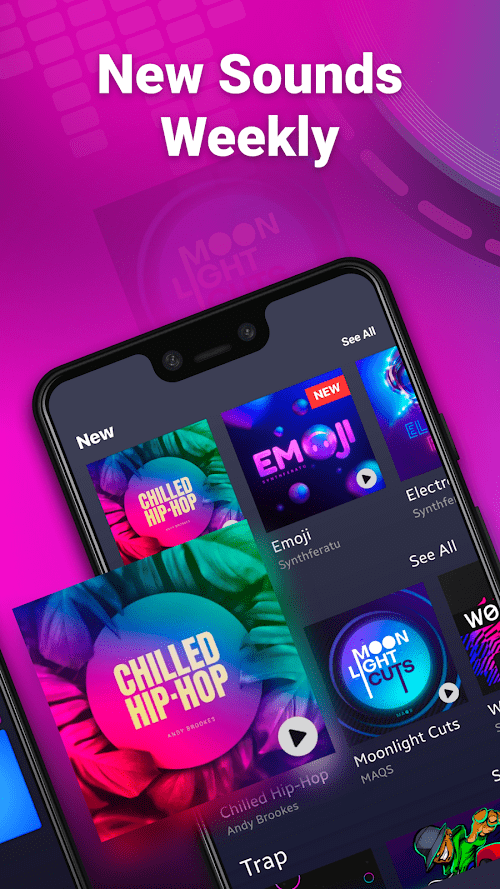 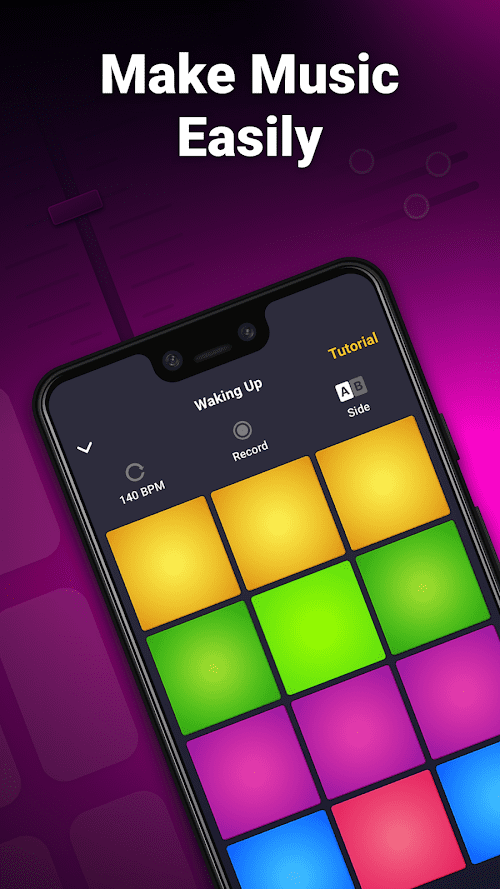 Drum Pad Machine - beat maker is a popular DJ beat music mixer about beat making released by Easybrain. It helps users make beats of music like a pro. Users can create beats and loops on an iOS phone, Android phone or tablet with the touch of a finger. In addition, Drum Pad Machine- beat maker also supports free download.

1. Drum Pad Machine is easy to use

3. It has built-in real-time recorder

5. Its interface is intuitive, simple and beautiful

7. Users can create their own music

8. Drum Pad Machine is not for professionals

9. It's not very feature rich

11. its sound variety is not very good

Drum Pad Machine - beat maker is the easiest way to help beat makers and music makers to generate beats, melodies, and sounds. It's a music maker with a virtual drum kit, and a powerful music production app with a high-quality sample. In Drum Pad Machine, users can make music on devices such as metronomes, can create tracks, make beats, and make mixtapes, and can also record sounds through the metronome and share music and songs with the world.

The Drum Pad Machine is distinctive. Users can create their own music, play drums, and make beats on the go, as well as customize their sounds. Drum Pad Machine - Make Beats uses every inch of the user's device screen to bring users' original ideas to life with Tap Mode. Its sequencer allows users to control the tempo and helps users create stunning dance music. Authentic studio samples from the Drum Pad Machine make every sound believable. Its real-time recorder saves every minute of the music the user makes.

Drum Pad Machine's simple interface and easy-to-use operation allow users to easily perform different tasks. Its interface is very simple and beautiful, suitable for users of any age. On tablets and phones, the Drum Pad Machine is visual, its screen has a polished modern look and rich colors. Whether the user is Dubstep, Drum & Bass, House, Trap, EDM, Hip-Hop, or Techno, the app keeps your drum beats fresh and expands your musical horizons. The design of Drum Pad Machine - beat maker is also very simple. Users can easily drag and drop samples onto drum pads and mix and match their samples to give them their unique sound.

Drum Pad Machine - Make Beats is a free music and beat maker app for Android and iOS operating systems. It makes it easy to create unique and original drum sounds using your phone or tablet. So, no matter what device users have, no matter where they are, they can easily and easily create beats with Drum Pad Machine - Make Beats. The first choice for beat makers and music makers, it's easy to use, the interface is simple and intuitive and stylish, and it's also great for kids. At the same time, its design is simple, which makes music creation with Drum Pad Machine easier and freer.

This APP Drum Pad Machine - beat maker is a free audio production APP, its operating system has Android and iOS, and this APP has different language versions, such as Chinese, English, French, and so on. This APP is a free music APP, it should be regarded as a music mixing workbench. In this APP, users can make songs of their unique style in interesting ways. If users are looking for a simple and complete tool, then this application should be a good choice for you. In this app, users can enjoy mixing in a different and very interesting way, and there are also very interesting free mini-games in the app.

When starting the app for the first time, the user will see a guide with many levels to help you understand how the game is played, as well as the function of this mixer, indexed through the system. You can learn to create rhythm, and you can learn some music-related content. After you understand the workbench, you can create a lot of different music according to your own needs.

The rating of this app is 4.5. In the app market, its comment count reached 982,924 votes, ranking high among free entertainment apps.

1, This platform has a lot of sound packs, users can choose their favorite to create according to their preferences

2. This APP has very detailed system guidelines, even a novice can easily get started.

3. There are some very interesting free games in the APP for players to choose

1. The color of the piano keys in the APP is relatively simple and difficult to remember.

Drum Pad Machine - beat maker is very easy to use, you can click a button on the workbench at a time to listen to the sound and length, and if you click several buttons at the same time, you can make a complete rhythm and song. And in this app, if you click a button, it will light up, which can help you remember and identify the beat of each sound. You can learn a lot of music-related theoretical knowledge in this APP.

On the other hand, the great advantage of this APP is that it has a very large number of sound packs, you can choose your favorite and most interesting to create, and based on specific sounds, you can combine different styles to compose songs Innovation. You can choose rap, you can choose electronic music, you can choose rap. There is house music, electronic music, pop music, and some bass and treble music. Users can become a DJ through the mixer and share their songs with their friends and acquaintances. From this point of view, it also has a certain social function, because after you make music in this APP, you can share it with your friends through your Youtube or other social platforms, and they can hear your music Create, give you likes, give you comments, so many people like to make beautiful music in this APP to share with everyone, and become a small UP master of music.

On the other hand, the advantage of this APP is reflected in its gameplay. This APP closely combines music and games, and players have fun learning some music-related knowledge in this game. Some people who like music can also use this APP to create their fun music. Those who like music and games play some games through this APP, so it is a perfect combination of games and music, which is highly innovative.